Steven Speilberg has directed so many wonderful films over his long and still-thriving career that it is daunting to try and pick the best; but is clearly one of his finest and most completely realized films.  At a time when all too many movies insult the audiences’ intelligence with the simplicity of their stories, compliments the audiences’ intelligence, assuming that they will be able to follow a very complex and compelling political plot.  And it never shies away from the uncomfortable to discuss, but necessary to understand, differences in the many sides of the political battle.  We see the clear division not only between those who were for slavery and those who were against it, but also those who thought all men were created equal, and those who thought that thought all men should have equal rights, but were not equals at all. 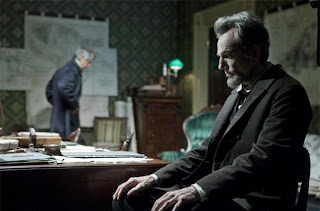 Not a biography of our 16th president, LINCOLN is the story of the race to pass the 13th Amendment to the Constitution, abolishing slavery, why it became a race to ratify before the Confederacy could surrender, and the wonderfully wicked backroom scheming and negotiating that pulled it off.  It’s also the story of a President we already thought we knew, but with many unfamiliar facets to his personality.  He was a man who felt great despair, but who also had a strong sense of humor, and loved to tell jokes.  He was a man who was trapped in a marriage with a woman he respected but did not love, and who he had threatened to put in a madhouse.  He was a man who turned to this same woman to interpret his dreams, in hopes that they might foretell the future.  He was a man who should have sounded like Raymond Massey or Royal Dano, but whose voice was actually several octaves higher.

The performances by a large ensemble cast are uniformly excellent.  Abraham Lincoln is portrayed by Daniel Day-Lewis, and will surely be our image of for decades to come.  Sally Field campaigned relentlessly for the part of Mary Todd Lincoln, and it is among the finest performances of her career.  Other standout performances include Jackie Earle Haley as Confederate Vice President Alexander Stephens; Tommy Lee Jones as abolitionist Senator Thaddeus Stevens; Joseph Gordon-Levitt as Lincoln’s desperate-to-enlist son; and James Spader as W.N. Bilbo, who uses every trick in the book to try to get Lincoln the votes he needs.

The script is Tony Kushner, who wrote ANGELS IN AMERICA, and scripted Speilberg’s previous .  It is based in part on the book TEAM OF RIVALS: THE POLITICAL GENIUS OF ABRAHAM LINCOLN, by Doris Kearns Goodwin.  The cinematography by Speilberg’s frequent collaborator Janusz Kaminski, is evocative without calling attention to itself.  The production design by Rick Carter, costumes by Joanna Johnston, and make-up and hair by a team of over forty combine to bring the viewer into a Washington, D.C. of the 1860s that seems unquestionable genuine.  I would not recommend for young children – the brutality of war is something they should be spared, and the details of the political fight would be beyond their understanding.  But it is a movie that should be seen by all adults and teenagers – and the latter will learn from it far more about the Civil War, and the workings of government, then they ever will by studying their dumbed-down and politically correct textbooks.  Incidentally, was budgeted at $65,000,000.  ABRAHAM LINCOLN, VAMPIRE HUNTER, was originally budgeted at $85,000,000 (now they say it’s $69,000,000).  To be fair, I haven't yet seen VAMPIRE HUNTER, but I think I can predict which will have a longer shelf life.
3:10 TO ADDED TO NATIONAL FILM REGISTRY 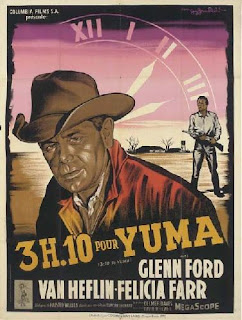 The original 1957 version of ‘3:10 TO YUMA’, directed by Delmer Daves, from a story by Elmore Leonard and screenplay by Halsted Welles, is one of twenty-five films selected for inclusion in the National Film Registry, a major honour.  The film stars Van Heflin and Glenn Ford in two of the finest performances of their exceptional careers, with Ford playing very against type as the ruthless but charming outlaw whom farmer Heflin must safely deliver to a train, and the law. Other films so recognized, of particular interest to Western fans, include CHRISTMAS STORY (1983), directed by Bob Clark, from Jean Shepherd’s novel, IN GOD WE TRUST, ALL OTHERS PAY CASH, and scripted by Shep, with Clark and Leigh Brown.  It’s the story of a boy, Peter Billingsley, growing up in Depression Era-Indiana, and his obsession with getting a Red Ryder BB-Gun for Christmas.   The 1914 version of UNCLE TOM’S CABIN, from Harriet Beecher Stowe’s world-changing novel, stars Sam Lucas as the title character, and was the first feature film ever to star a black actor.
FRANCO NERO MAY RETURN IN 'DJANGO LIVES'! 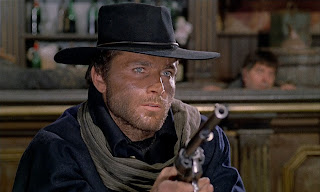 The near-frantic anticipation for Quentin Tarantino's DJANGO UNCHAINED has created tremendous interest in Spaghetti Westerns throughout the film industry.  One of the many hopeful results is that Franco Nero, the original Django, who makes an appearance in the Tarantino film, may soon star once again as Django in DJANGO LIVES!
Mike Malloy and Eric Zaldivar, producers of 2011's THE SCARLET WORM, have a letter of interest from Nero, for their plot about an older Django living in Los Angeles in 1915, and working as a technical advisor on Western movies, something several lawmen like Wyatt Earp, and outlaws like Al Jennings, actually did.
I'll be seeing and reviewing SCARLET WORM soon.  I've heard very positive buzz about the film, whose cast includes Spaghetti Western stalwarts like Dan Van Husen, Brett Halsey, and Mike Forest, and was stunned when Malloy told me they made the movie for $7500!  I'll have more details soon!
TCM FANATIC - WESTERN NOW ONLINE!


Well, it's 12:36 a.m., and officially Christmas Eve as I type this. I've got a ton of good stuff stockpiled for the next several Round-ups!  In addition to my previously mentioned interviews with HIGH CHAPARRAL star Henry Darrow, and writer/actor/director Tom Jane, this week I interviewed George Schenck.  Not only is George a writer and Executive Producer on NCIS,  he started out writing Westerns, and has wonderful stories about writing movies for Clint Walker, Lee Van Cleef, Warren Oates, and scripting the first episode of THE WILD WILD WEST!  Stay tuned.

I hope you have a wonderful Christmas, and Santa brings you everything you want the most, like that Red Ryder BB Gun (Don't shoot your eye out!).