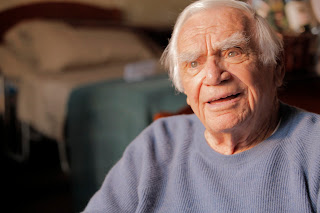 Ernest Borgnine died this summer at the age of 95.  Few of us make it to that age, and few of those who do have the physical and mental stamina to work to the end like Borgnine did.  He’d continued to act – he made his last Western, NO CHANCE IN HELL, in 2008, and even voiced a continuing character in SPONGEBOB SQUAREPANTS.  He’d written his autobiography, ERNIE, and over the last few years of his life he’d travelled the country making appearances and discussing his book, his career and his life.

At a jam-packed screening of his Oscar-Winner MARTY at the North Hollywood Library, he reminisced about MARTY, MCHALE’S NAVY, FROM HERE TO ETERNITY, and his unforgettable Westerns like THE WILD BUNCH and VERA CRUZ.  When I spoke to him at the Hollywood Show in , about a year before his death, I asked him when he was going to make another Western.  He laughed, “I'm doing one right now! It's called THE MAN WHO SHOOK THE HAND OF VICENTE FERNANDEZ. It's a Western, but it takes place in a nursing home.” 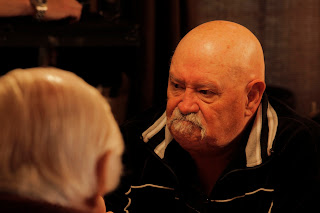 Barry Corbin turning on the charm


Now the public will have the chance to see Ernest Borgnine in his last film, which opens at the Laemmle Theaters in this Friday.  One cannot help but approach such a movie with trepidation.  Fans of Laurel and Hardy will never forget how awful Stan Laurel looked, post-stroke, in UTOPIA.  It’s painful to recall the indignity of the great Basil Rathbone ending his career in HILLBILLYS IN A HAUNTED HOUSE.  Spencer Tracy fared much better with GUESS WHO’S COMING TO DINNER, although studio execs so feared that he would die before the film was finished that he wasn’t paid a dime of his salary until his last scene was in the can.

Happily, there are no such regrets attached to VICENTE FERNANDEZ, nor is Ernest Borgnine reduced to a cameo: it’s his film from start to finish.  He plays Rex Page, who excelled as radio DJ ‘Ricochet Rex’, but is consumed with bitterness at never having made it as a movie actor.  He’s obsessed with A GOOD MAN KILLED BAD, a Western he didn’t get to star in, and he watches his disintegrating VHS tape of the movie every day, repeating the monologues, running the dialogue with his indulgent ten-year-old granddaughter Clementine (Audrey B. Scott).  Although he shows no interest in Clem’s soccer prowess, he’s much closer to her than to her mother and his daughter Denise (Dale Dickey), or his wife of 47 years, Irma (June Squibb).


A stroke sends Rex to the hospital, then to a nursing home to recover, and to regain the ability to walk.   The nursing home’s staff is entirely Latino, and Rex does not endear himself to them with his ‘wetback’ comments.  But one nurse is grateful to him immediately: beautiful Solena (Carla Ortiz) is being pawed by Dr. Dominguez (Tony Plana) until Rex, coming out of anesthesia, tells him to leave her alone.  When he is recognized as ‘Ricochet Rex’, the staff warms to him.  When he reveals in passing that he once shook hands with ‘The Frank Sinatra of , Vicente Fernandez’, Rex becomes their hero.  And they need a hero, because the nursing home is run by a patient whose family owns the place and others like it, and he and Dr. Dominguez work together to terrorize the employees and residents.  That patient, Walker, is played with bravura menace by the wonderful Barry Corbin, who was so impressive as the sympathetic judge in REDEMPTION: FOR ROBBING THE DEAD (read my review HERE ).  There are many parallels between the nursing-home folks and the scared town-folk in A GOOD MAN KILLED BAD, and it’s oddly delightful to watch Walker and his two henchmen zipping around on their Rascal Scooters intimidating everyone.  There’s an especially memorable scene where they ride circles around male nurse Alejandro (Arturo del Puerto), menacing him with the bull’s horns mounted on his Rascal, and knocking him off his bike.

Rex’s popularity and power at the nursing home grows out of his ability to defeat at the card-game Rat Screw (a variation on War), and as Rex becomes more of a hero to the staff, he has less and less time for his own family.  Much of the story turns on whether, come 4th of July, he’ll attend his granddaughter’s soccer match of the Vicente Ferandez concert. 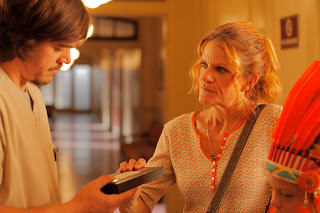 
Very unusual for today, this modest budget film is handsomely lensed in actual 35mm Fuji Film by Eric Leach, a camera operator and second unit cinematographer on many big pictures.  Written and directed by Elias Petridis, VICENTE FERNANDEZ is a hard film to classify.  While officially called a comedy, much of the film’s tone is more serious than that suggests, dealing with over-medicating and undernourishing patients, and kicking them out on a whim.  One of the funniest elements is the title sequence, which parodies Sergio Leone’s title sequences, accompanied by a song reminiscent of Ennio Morricone’s ‘English-as-a-second-language’ themes like LONESOME BILLY and A GRINGO LIKE ME. 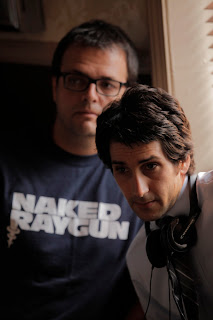 
The film is uneven in its successes, sometimes introducing very interesting notions, and not following through on them.  Rex’s agent, Burt, is forever calling up with pipe-dream plans for Rex’s career, eventually getting him an important audition.  But does he actually believe Rex can ‘make it’, or is he just stringing him along?  You never find out, and even though Emmy and Tony-winning MAD MEN star Robert Morse is prominently billed, you never see him: he’s only a voice on the phone.

Also, the actor who beat Rex out for the lead role in A GOOD MAN KILLED BAD, incredibly, ends up in the next hospital bed, but is woefully under-utilized.  The tiny budget is occasionally evident – crowd scenes are sparsely populated, and what is ‘the big game’ first seems to be a girl practicing kicks by herself, with one adult watching.

The biggest strengths are in the performances.  Borgnine dominates the film as a man who has long thought his life was worthless, because he hasn’t achieved his loftiest goals.  Corbin gives Borgnine the heightened level of meanness he needs to play off of.  And as the, granddaughter Audrey B. Scott is surprisingly believable, even when delivering dialogue that seems unnatural.  And hardcore Western nerds take note: the man who introduces Rex to Vicente, thus inducing the handshake of the title, is Peter Sherayko, Texas Jack Vermillion from . 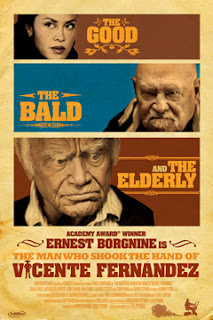 We’ll all miss Ernie, but it’s very nice that he could go out on his strong, film-carrying performance in THE MAN WHO SHOOK THE HAND OF VICENTE FERNANDEZ.

Just the one lead story for tonight’s Round-up – I have to finish some script revisions, and prepare questions for an interview for next week’s Round-up. Have a great week!