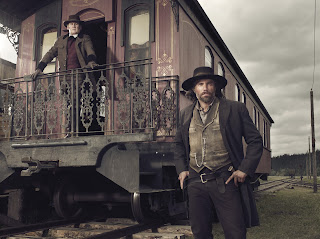 As reported here on November 18th, AMC’s commitment to a third season of HELL was put on hold when newly signed show-runner John Shiban bowed out.  Previously, the contracts of series creators/writers/producers Joe and Tony Gayton had not been renewed.

Happily, AMC has just announced that there will be more HELL, this time overseen by exec producer and showrunner John Wirth, who has previously performed similar duties on PICKET FENCES, FALLEN SKIES, TERMINATOR: THE SARAH CONNOR CHRONICLES, and several other series.  Most heartening of all, back in 1993 he was a writer and producer on THE ADVENTURES OF BRISCO COUNTY JR. 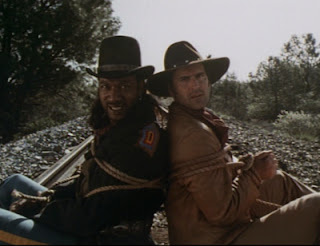 No, it's not from HELL, it's from BRISCO COUNTY, JR.


You can hear the collective sigh of relief from the various producers.  Jeremy Gold, Endemol Studio’s exec producer on HELL, said "We are delighted that John Wirth will be joining us on this remarkable journey. John is a proven showrunner with a terrific voice and a deep passion for our show."  Entertainment One Television’s Michael Rosenberg concurs.  "We're delighted to continue our relationship with AMC, Endemol and Nomadic Pictures.  John Wirth is an incredible talent who will drive our roaring series and build on the strength and success of the HELL ON WHEELS brand." Season three’s ten episodes are scheduled to premiere in the third quarter of 2013.


FROM SUNDANCE TO THE WEB TO , 4 NEW WESTERNS IN THE WORKS!


This New Mexico-lensed Western from Kickstart Productions is heading for the Sundance Film Festival in January.  Set in post Civil War , it’s the story of the collision between a renegade lawman, a religious fanatic and a once-soiled dove. 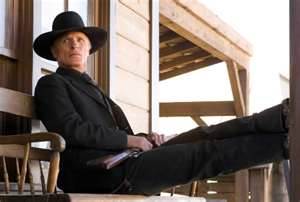 Toplining as Sheriff Jackson is Ed Harris, who did a terrific job adapting Robert B. Parker’s APPALOOSA, as well as directing and starring, and who, back in 1996, starred in Ted Turner’s version of Zane Grey’s RIDERS OF THE PURPLE SAGE.  Playing Sara is MAD MEN’S beautiful January Jones, who also starred in Tommy Lee Jones’ THE THREE BURIALS OF MELQUIADES ESTRADA.  Reverend Armstrong is portrayed by Jason Isaacs, who played Lucius Malfoy in the HARRY POTTER films.  Eduardo Noriega, who plays Miguel Ramirez, starred in last year’s BLACKTHORN, playing opposite Sam Shepard’s Butch Cassidy.  He will soon be seen with Arnold Schwarzenegger in the modern-day Western THE LAST STAND.  Chad Brummett, who plays Sid, was Kane in 3:10 TO , and will be seen next year in THE LONE RANGER. 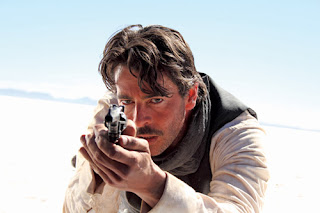 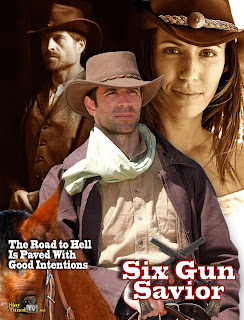 When I spoke to Western actor Martin Kove at a NATIONAL DAY OF THE COWBOY event back in August, I asked him what his next Western would be.  “I’m doing an internet series called SIX GUN SAVIOR, a supernatural western.”  That internet series has since been promoted to feature status, and as the accompanying stills attest, they’ve been filming at Melody Ranch. 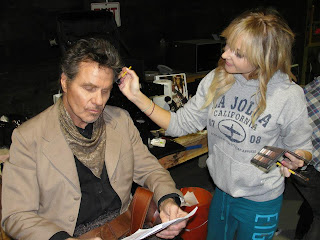 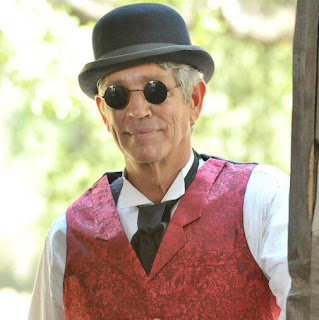 Eric Roberts?  The Devil it is!

The plot concerns gunman Lane McCrea (Kaleo Griffith), who has become the Devil’s bounty hunter since selling his soul to save his wounded brother’s life.  In trying to get free of his obligations, Lane is helped by The Mentor (Martin Kove), and must face up to The Devil (Eric Roberts). 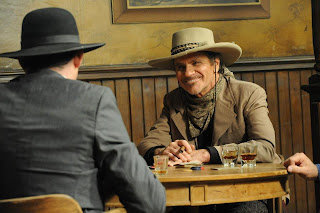 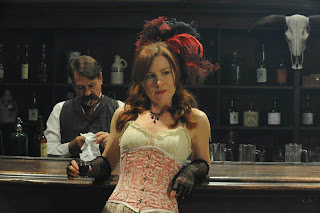 ‘DAY OF THE GUN’ SECOND WESTERN

A tip from actor Dan Searles turned me on to DAY OF THE GUN, a Western shot in by Wayne Shipley.  It turns out that writer/director Shipley started One-Eyed Horse Production back in 2007, to make his first Maryland-lensed (but not set) Western, ONE-EYED HORSE, so this is his second New England oater.  Although I haven’t got a synopsis, the accompanying six-minute trailer will give you a good taste of a very professional-looking production.  And they certainly take their weapons and their history seriously – there’s even an S.A.S.S. (Single Action Shooting Society) Special Edition of ONE-EYED HORSE available.  You can learn more at their site, HERE.


‘JANE GOT A GUN’, AND SHE’S GOT MORE CAST MEMBERS

Back in May we reported that Natalie Portman, who previously starred in the (2003), was set to star in another Western, JANE GOT A GUN.  It’s about a woman whose bandit spouse comes home shot to pieces and nearly dead. When his former associates come to finish him off, Jane turns to an ex-beau to save them.  Michael Fassbender, of BAND OF BROTHERS, INGLOURIOUS BASTERDS, and JONAH HEX fame, will play her former lover.  Now just added, Joel Edgerton, who played Owen Lars in the later STAR WARS films, and will soon be seen in ZERO DARK THIRTY and as Tom Buchanan in THE GREAT GATSBY, will play the leader of the gang out to kill Jane’s husband.

The role of the husband is not yet cast, but according to IMBDPro, the top two contenders are Chris Pine, soon to be seen as Capt. Kirk in the next STAR TREK movie, and Joel Kinnaman, currently filming the ROBOCOP reboot, playing the title character.

JANE is an original screenplay by first-timer Brian Duffield, and was a highly touted ‘Black List’ script. (Note: this ‘Black List’ has nothing to do with politics. It is a list of highly respected scripts that haven’t been sold. Stupid name, considering the ‘Black List’ connotation, isn’t it?) It is to be directed by Lynne Ramsay, helmer of WE’VE GOT TO TALK ABOUT KEVIN.


That's a wrap for this week!  I hope to have me Henry Darrow interview ready for next week, and coming soon I'll have an interview with actor/director To Jane about his soon-to-lens Western A MAGNIFICENT DEATH FROM A SHATTERED HAND!  I may even have my review of LINCOLN if I ever get to see it!