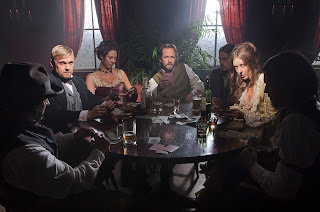 The third entry in star and creator Luke Perry’s Hallmark Movie Channel Western franchise, GOODNIGHT FOR JUSTICE will premiere on Saturday, January 26th.  Luke Perry continues as circuit judge John Goodnight, and in GOODNIGHT FOR JUSTICE: QUEEN OF HEARTS a stagecoach hold-up brings Goodnight face-to-face with beautiful woman-on-the-run Lucy Thoreau, played by Katherine Isabelle of ENDGAME.  Best of all, the man who stands in her way is Rick Schroder, Newt from LONESOME DOVE, and it’s about time we had him back in the saddle again!  More details as the date gets closer. 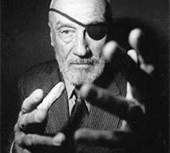 Filmmaker Patrick Francis first met legendary director Andre de Toth at a party at Leonard Maltin’s, and they hit off immediately.  The normally reticent director opened up to Francis, and their many long conversations led to the documentary which Francis is fund-raising to finish.

Known to the general public for his Vincent Price 3D starrer HOUSE OF WAX, Hungary-born de Toth worked in for the Korda’s before coming to .  He excelled in films noir, and smart, tough and unflinching Westerns like DAY OF THE OUTLAW, RIDING SHOTGUN, INDIAN FIRE, and RAMROD, reteaming his wife, , with her SULLIVAN’S TRAVELS co-star Joel McCrea.  De Toth directed a string of Randolph Scott pictures, and directed episodes of some of the best Western TV series: , MAVERICK, BRONCO, and Sam Peckinpah’s THE WESTERNER.


This documentary is not just a ‘potential’ movie – it exists.  The purpose of the Indiegogo campaign is to raise completion money, to pay for post-production fees, the rights to use film-clips, and other nuts-and-bolts needs.  I’ll be talking more to Patrick Francis about Andre de Toth in the Round-up very soon.  But at the moment, there are just nine days left to this fund-raiser.  If you’d like to learn more, and hopefully contribute, please go here: http://www.indiegogo.com/Andre-deToth

Personally, I can’t think of a better Christmas or Hanukkah gift than a good book, and I’ve got four great ones to recommend.  Though I’ll be doing detailed reviews of each soon, I wanted to get the word out early for those of you who haven’t finished your holiday shopping (and those like me that haven’t started our shopping!). 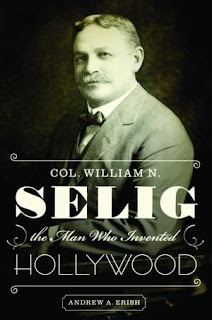 COL. WILLIAM SELIG -- THE MAN WHO INVENTED HOLLYWOOD, is a fascinating biography of one of the most important men in the history of film.  All the more remarkable, although his contributions equal those of D.W. Griffith, and surpass those of DeMille, until Andrew Erish wrote this fine biography, Selig’s work was virtually unknown even among the top tier of film historians.  In addition to being a highly entertaining read, SELIG is an essential addition to the library of any serious film buff.   I’ll be featuring my interview with Andy Erish in the Round-up shortly.

’S LITTLE HOLLYWOOD – SEDONA AND NORTHERN ARIZONA’S FORGOTTEN FILM HISTORY 1923 -1973, by Joe McNeill, is a lively and informative telling of the busy history of Western movie production in one of the most beautiful spots on Earth.  Joe covers it all in remarkable detail, from the silent days of Rex the Wonder Horse, and early Zane Grey stories, through THE OUTLAW, ANGEL AND THE BADMAN, LEAVE HER TO HEAVEN,  the original 3:10 TO YUMA and THE ROUNDERS, even unearthing details of a Nazi-propaganda Western! 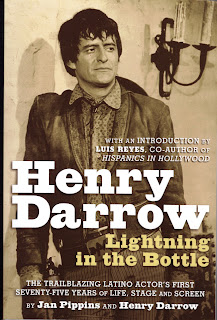 HENRY DARROW – LIGHTNING IN THE BOTTLE by Jan Pippins and Henry Darrow, is the delightful biography of the actor we all discovered as Manolito Montoya on THE HIGH CHAPARRAL.  While I always loved the series (happily playing now on INSP), and particularly the character of Manolito, I had no idea of the character’s and the actor’s importance to the Hispanic community, being, with costar Linda Cristal, the first Latino actors to star as Latino characters in a TV series.  Darrow went on to be the first Latino to play ZORRO as well, a character he portrayed in three separate productions.  This book is not only the life and career story of a highly talented actor, it is also an in-depth study of HIGH CHAPARRAL, and any fan of the series will enjoy it.  Just this week I interviewed Mr. Darrow, who was not only charming and informative, but kept me laughing practically from ‘Hello’ on.  I’ll be running the interview asap.

GUNSMOKE – AN AMERICAN INSTITUTION by Ben Costello is an in-depth look at twenty years and 600 episodes of one of the absolutely finest TV series of any genre, and why it’s still popular and relevant half a century after it transitioned from radio to TV.  A big, beautiful coffee-table book, generously illustrated, painstakingly researched; it draws on the memories of dozens of actors, directors and writers.  It features a capsule description of every episode, and in-depth interviews with cast members Dennis Weaver, Buck Taylor and Burt Reynolds. 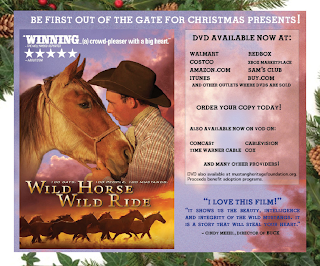 This beautiful, inspiring documentary is about folks who take part in a competition whose purpose is to raise money to rescue wild horses on government land.  100 people each take on a completely wild mustang, and have 100 days to train it for a competition.  (If you haven’t read my review, see it HERE)


It’s now available on DVD – the flyer above has the details.


NO "THANKS FOR THE MEMORIES"! 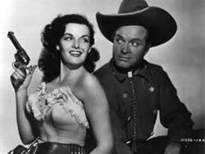 If you're as big a fan of the late Bob Hope as I am, you may have been planning to go to his Toluca Lake home today or Sunday for his garage sale, where, it was said, tons of Christmas decorations and stuff were going on sale to the public for cheap.  I'll save you a trip: although they announced an opening time of 9:00 a.m., they started letting people in at 7:00.  There is NOTHING left!  My daughter, who got there before 8:30, described the scene as post-apocalyptic, with crowds surging from one empty table to the next in near panic.  There are two-hour lines of ‘Sooners’ waiting to pay for everything.  Too bad.  Just did a search, and the only Bob Hope movies on schedule are on TCM.  A week from tomorrow it’s THE IRON PETTICOAT, co-starring him with Kate Hepburn, and said to be one of his worst.  The following Tuesday there’s the delightful SEVEN LITTLE FOYS.  In the meantime, I’m gonna dig out my VHS copy of PALEFACE.


That’ll do it for this week.  Coming soon in the Round-up I’ll have word of a new Western starring APPALOOSA’S Ed Harris, another Western that started as a web series but is going to be a feature, my interview with Henry Darrow, and some Spaghetti Western suggestions to put you in a DJANGO UNCHAINED frame of mind!