CELEBRATE ‘THE COWBOYS’ WITH ‘A WORD ON WESTERNS’ TUESDAY AT THE AUTRY! 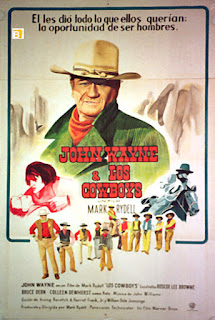 It’s been over two years since Western historian, master interviewer and host Rob Word has held a live A Word on Westerns event at The Autry!  And he returns right on time this Tuesday, May 17th, to celebrate the 50th anniversary of the classic John Wayne Western, The Cowboys.   Western fans know that May is the month of the Duke’s birth, and Rob has always found a new Wayne theme for the Word on Westerns celebration, but he’ll have a hard time topping this one.  For anyone who doesn’t know the film, when Wayne’s ranch-hands run off after a gold strike, the only way he can bring his herd to market is to hire a dozen school-boys for his cattle-drive.  Few boys, or men who once were be boys, have ever seen the film and not ached to be a part of it.

Cowboys stars scheduled to attend include:  Robert Carradine, who plays Slim; Nicolas Beauvy, who plays Dan, the kid with glasses that Bruce Dern terrorizes; Alfred Barker Jr., who plays Fats; Steve Benedict, who plays Steve; Stephen R. Hudis, who plays Charlie Schwartz; and Sean Kelly, who plays Stuttering Bob.  A Martinez, who plays the outsider cowboy Cimarron, planned to attend, Word explains, “But he got a job in Vancouver, and he said, ‘I’m really anxious to get back to work.’ The COVID has been tough for everybody. So he came to the house and we shot an interview,” part of which will be shown at the event.

And don’t think Rob has taken the last two years off.  With no live events, he became even more committed to posting weekly videos on his Word on Westerns YouTube page, interviewing so many Western filmmakers from both sides of the camera.  And all through COVID, “we've never missed a Sunday, and it's been over a hundred shows now.  I'm using more clips and more stills. It takes 30 to 40 hours a week, every week. There is no break, there is no vacation.”

And the fans are appreciative.  His 9 Stars Over 90 Share Hollywood Secrets has been watched more than 279,000 times since posted.  Among his many great ‘gets’, Rob has recently posted an interview with the great actor – and villain of The Comancheros – Nehemiah Persoff, “and then he passed away in April. But I'm so lucky to not only have talked to him, because he was a wealth of wonderful memories, but he got to see the episode. He’d written his autobiography, and at the end of the Zoom, he says, ‘Hold that book up one more time!’ And so I held it up.  Then he calls and says, ‘I sold 150 copies that day!’  He was just thrilled. I'm so glad that he saw that.”

The celebration of The Cowboys will be Tuesday, May 17th, at The Autry, in the Wells Fargo Theatre.  Doors open at 10:30, and the program begins at 11 a.m.  I hope to see you there!

Here’s a link to the Nehemiah Persoff interview, which will lead you to over 100 more! 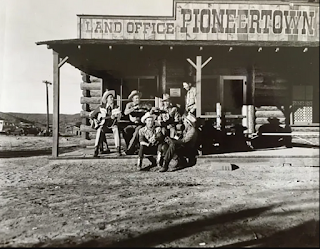 The movie town located in the San Bernadino Desert, where hundreds of Western films and TV episodes were shot, will play host to the Pioneertown International Film Festival from Friday May 27th through Sunday May 29th.  The first of what is planned as an annual event, it was an unavoidably long time in the making.  “It's been about five years since we started this idea,” festival founder Julian Pinder recalls.  “We did all kinds of legwork, launched a website and announced the festival; and about a month later, suddenly the whole world was shut down. We're really happy that we survived COVID.”

Back in 1946, Western movie villain Dick Curtis, Roy Rogers, and the band Sons of the Pioneers pooled their resources and bought the 32,000 acres of desert that started out to be the movie town of Rogersville, before it was decided to name the ranch after the band.  Unlike other movie towns, this one was built with not just facades, but practical buildings, and real motel accommodations, so crews could actually live there during production rather than commuting.  Hopalong Cassidy wing-man Russell Hayden joined in, and soon he was shooting the Judge Roy Bean series, Gene Autry was shooting The Gene Autry Show, and Duncan Reynaldo and Leo Carrillo were filming The Cisco Kid on the lot.

Nearly 70 years later, the joint is once again jumping, and featuring a remarkably eclectic mix of Western films and entertainments.  Events will be happening at five venues: The Desert Willow Ranch, The Historic Soundstage, Pioneertown Motel, Historic Red Dog Saloon, and the Super X Ranch.  Among the films being screened are a double bill of “Acid Westerns” directed by Monte Hellman and starring Jack Nicholson, and presented by their daughters; Buck and the Preacher, starring and directed by Sidney Poitier and co-starring Harry Belafonte; the premiere of a documentary about the Durango Kid films; and From Dusk Till Dawn, introduced by producer and special effects creator Robert Kurtzman.

Pinder notes, “The traditional classic westerns obviously were made to be seen on a big screen.  We really wanted to reintroduce folks to these great classics like they should be seen. So we partnered with Paramount to screen some of their recently restored westerns.”

There are plenty of new films as well.  “Inglorious Serfs is a Ukrainian Western that was made in the last couple years. And the director, because of the war he's been exiled in the U.S., so he's able to come.”  There will even be the premiere of the much-anticipated The Last Manhunt, produced by Jason Momoa.  Inspired by the same events that were the basis of Tell Them Willie Boy is Here, this version is based on the oral history of the Chemehuevi tribe and, Pinder notes, “The Last Manhunt was shot actually all around Pioneertown.” 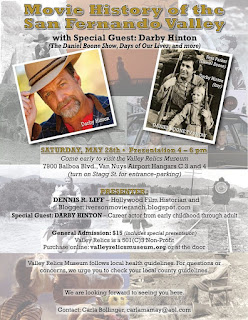 On Saturday, May 28th, from 4 ‘til 6 p.m., Hollywood Film Historian Dennis R. Liff will share a Powerpoint Presentation about the movie-making history of the San Fernando Valley.  Joining him will be special guest Darby Hinton, a busy and talented actor, and so well-remembered for playing son to Fess Parker on Daniel Boone.   To learn more, go here: valleyrelicsmuseum.org

INSP’S ‘DUKE DAYS OF MAY’ CONTINUES! 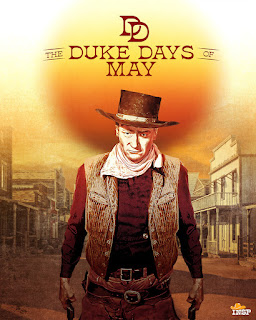 I hope you’ve been enjoying the Duke Days of May on INSP, but if you’re a little late to the party, you happily have two more weekends left in May, including Memorial Day Weekend, and 14 more John Wayne movies to watch on INSP.   And there are quizzes and contests going on.  Check out their Facebook page for details!

Obviously, it’s been a long time since I wrote a new Round-up – last July, to be specific.  This has caused some readers to ask questions like, “Hey Henry, did you fall off a cliff or something?”  Happily, no.  The fact is, in addition to writing the Round-up, I’ve been the Western Film & TV Editor for True West magazine for about seven years, and starting this past September, the INSP Channel hired me to write regular articles for their blog.  So, while I haven’t been writing the Round-up much, I’ve been writing about Westerns elsewhere.

I’m going to be updating this Round-up post next week, and I’m going to add links to all of the articles I’ve written for True West, and INSP in the last six months or so, as well as links to the Writer’s Block podcasts, where I do an update on the Western film biz on the first Thursday of every month.

All Original Content Copyright May 2022 by Henry C. Parke – All Rights Reserved