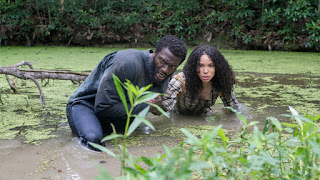 ‘UNDERGROUND’ GOES UNDER – NO 3RD SEASON FOR WGNA DRAMA

Amid all of the good TV-Western news – second seasons of HBO’s WESTWORLD and AMC’s THE SON – comes disappointing news for fans of the excellent pre-Civil War historical adventure series, UNDERGROUND.  Despite strong ratings and Emmy buzz, WGNA has announced cancellation of the Underground Railroad drama.

WGNA is owned by Tribune Media, and it was announced in May that Tribune was being acquired by local-TV giant Sinclair Broadcast Group, which owns 54 local Fox affiliates across the country.  Sinclair execs have gone on record saying that despite their respect for the quality and popularity of UNDERGROUND, they are looking for less expensive original programming.  Also cancelled was WGNA’s other high-profile drama OUTSIDERS, about generations of war-like hill people living off the grid in the Appalachians.

UNDERGROUND Exec Producer John Legend and series stars Jurnee Smollett-Bell and Aldis Hodge have reached out to fans via social media, asking them to campaign for a move to another network.  Oprah Winfrey’s OWN has been approached, and it looked like the show might have a chance with BET, the Black Entertainment Television Network, but the deal didn’t happen.  HULU streams UNDERGROUND and they, too, have been approached without success.  Not that anyone’s asked, but to me, the most logical home for the show would be NETFLIX, who had great success when they acquired the A&E-cancelled contemporary Western LONGMIRE; my second suggestion would be AMAZON, which is in a frantic competition with NETFLIX for market share. 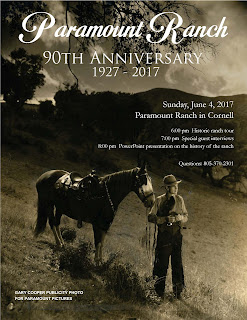 The Paramount Movie Ranch in Agoura will mark its 90th anniversary this Sunday.   The fun starts at 6 pm with a tour, and there will be displays, presentations, and a panel discussion featuring Hollywood historians Marc Wanamaker, Donald Bitz and Mike Malone.

In 1927, Paramount Pictures bought 2,700 acres of the original Rancho Los Virgenes to build their movie ranch.  While they filmed there for decades, the sets eventually crumbled, and the buildings we think of as Paramount Ranch actually started out with a different studio.  Mark Wanamaker explains, “The RKO Ranch was at Louise and Burbank Boulevard, in Encino. The CIMARRON street was built there in 1931, which was a major western town if you remember the film. It became the nucleus of the ranch, and later they built other buildings, residential neighborhoods… In 1953 Howard Hughes owned RKO, and he liquidated the ranch – he didn’t need it anymore. The Hertzs were a family that came from back east that always wanted to own and run a movie ranch. The Hertz family purchased the Paramount Ranch, purchased pieces of the RKO Ranch and brought them to the Paramount Ranch. The current western town at the Paramount Ranch was the RKO western town.”  You can read the rest of my interview with Marc HERE. 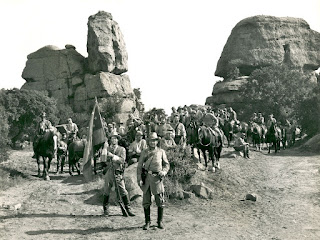 Iverson's Garden of the Gods

On Tuesday, May 23rd, The Valley Relics Museum, final resting place for hundreds of mementoes of San Fernando Valley restaurants, theatres and other fun spots – their collection of classic neon signs is unequalled – honored the memory of the Iverson Movie Ranch with a Power-point presentation by Iverson Ranch historian Dennis R. Liff, and Ray Vincent of the Chatsworth Historical Society. 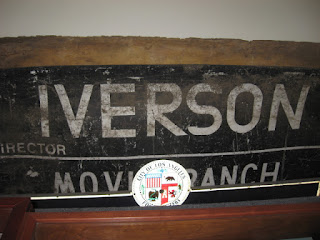 The place was packed with Western-movie aficionados, many of whom had grown up near Iverson; in their enthusiasm it was sometimes a race to see whether audience members could blurt out a location or identify a movie still before the speakers could.  A popular location since the silents, including Buster Keaton’s THREE AGES and Curtiz’ NOAH’S ARK, hundreds of A and B Westerns have been shot there.  The burned-out relay station from STAGECOACH was filmed there, as were TV series like THE LONE RANGER – it’s the home of the famed ‘Lone Ranger Rock’, HAVE GUN WILL TRAVEL, BONANZA, THE VIRGINIAN, and dozens more. 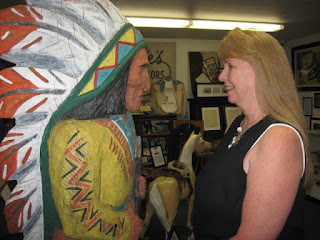 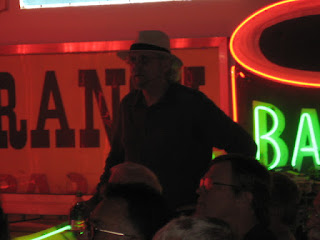 Sadly, in the late 1960s, the Simi Valley Freeway cut through the ranch, its visual incongruity and associated noise making it increasingly difficult to make any kind of movies, and record sound.  Condominiums have popped up among the iconic movie rocks that were the ranch’s greatest attraction; others have been dynamited, and still others have been buried.  But happily, the most famous rock area, the Garden of the Gods, is part of a park that is open to the public, as is the Lone Ranger Rock. 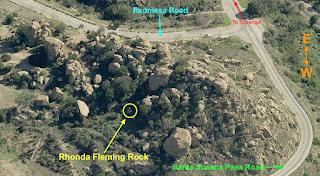 Find your way to the Garden of the Gods 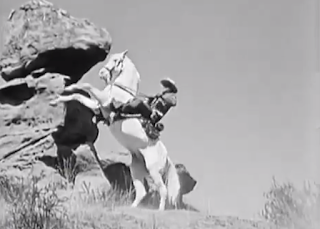 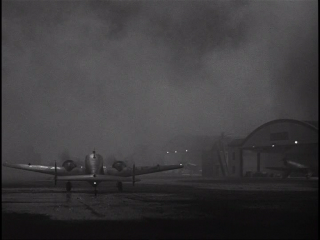 Just as I was putting this story to bed, I learned that Valley Relics and its founder, Tommy Gelinas, were in the news again.  It began a decade earlier, Christmastime in 2007, when it was announced that the original airplane hangar #1 at Van Nuys Airport, formerly Metropolitan Airport, was about to be demolished.  The reason this was big news was that it was the hangar around which so much of the action in Warner Brothers’ CASABLANCA (1942) had taken place.  It’s where Victor (Paul Henried) and Ilsa (Ingrid Bergman) Laszlo arrive early on, and it’s where at the end someone leaves and someone stays and someone gets shot and it’s the beginning of a beautiful friendship (I’m not going to spoil it for anyone who hasn’t seen it).

The owners of the Van Nuys hotel The Airtel, Jim and Christine Dunn, read the story, rushed over, and bought the front façade of the hangar.  It’s been stored in pieces at the Airtel ever since.  Christine Dunn announced in The Daily News that she is turning the job of reassembling the façade to Tommy Gelinas.  It’s not yet clear where its new location will be – Tommy thinks it would be too large for his museum.  It may well become the façade for a Moroccan restaurant in Van Nuys.  I know this isn’t strictly Western-related, but Humphrey Bogart starred in THE OKLAHOMA KID, and Paul Henreid directed nine episodes of THE BIG VALLEY, so I’ll continue to follow this story. 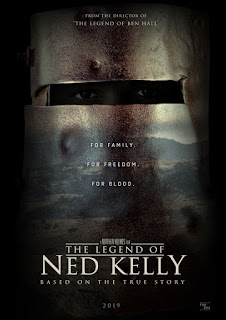 Matthew Holmes, whose THE LEGEND OF BEN HALL was named True West Magazine’s Best Foreign Western of the Year, has announced his next film, THE LEGEND OF NED KELLY.  Played previously by Mick Jagger and Heath Ledger, Kelly is an even bigger folk-hero in Australia then Ben Hall.  The most famous of the Aussie Bushrangers or highwaymen, he’s the one who made himself a suit of armor.  Matthew has just begun a Kickstarter campaign to finance the film. He financed the short subject version of BEN HALL that way, which lead to the feature.  I’ve never gotten involved with crowdfunding before, but I’m going to kick in a few bucks on this one.  If you’d like to learn more about the project, or possibly invest in it, click the link below:
https://www.kickstarter.com/projects/legendofbenhall/the-legend-of-ned-kelly-feature-film?ref=user_menu

FOR YOUR LISTENING PLEASURE, 'GUNFIGHTER' BY THE MIDNIGHT LARKS!

Here's a brand-new video, directed by Mike Malloy, producer of the fascinating Western THE SCARLET WORM (2011) and director of the excellent documentary EUROCRIME (2012). Midnight Larks in a new band with roots from the band Spindrift, who contributed to the soundtrack of the Scott Eastwood Western DIABLO.  The Gunfighter in the clips is the very talented and scary Aaron Stielstra, in scenes from SCARLET WORM and 6 BULLETS TO HELL (2014).  Enjoy! 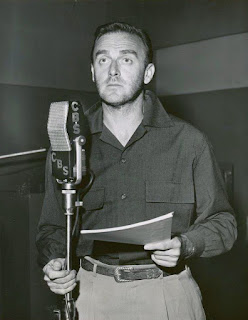 Jon Dehner is on the air!

Thirty-five years ago, in August of 1982, at a meeting of SPERDVAC, the Society to Preserve and Encourage Radio Drama, Variety and Comedy, some of the greatest voice-talents in the history of radio gathered to discuss their work.  All had performed on GUNSMOKE, most on HAVE GUN WILL TRAVEL, and all had other impressive credits.  Parley Baer was the original Chester Proudfoot; John Dehner played Paladin on HAVE GUN WILL TRAVEL and starred in FRONTIER GENTLEMAN; Virginia Gregg; Harry Bartell; Peggy Webber; and Vic Perrin played countless characters on dozens of series.  Barbara Watkins of SPERDVAC has begun posting one remarkable program a month, and this is a wonderful beginning.  Click HERE to listen. 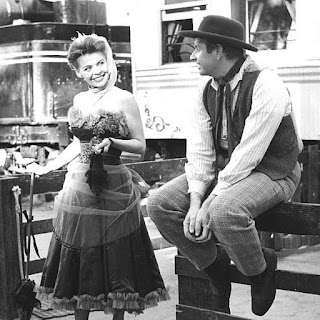 The link will also take you to the SPERDVAC page, where you can learn more about this fine organization, and even join up! 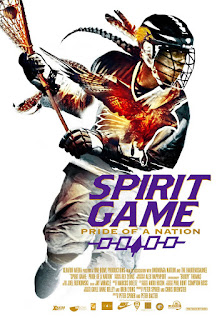 In the coming Round-ups I’ll be catching up with the Santa Clarita Cowboy Festival, the TCM Festival, book and video reviews, and the new documentary SPIRIT GAME – PRIDE OF A NATION.  And the nation is the Iroquois Confederacy.   It’s the true story of the Iroquois Nationals Lacrosse Team, and how for the first time the Championship Games were held on an Indian Reservation.