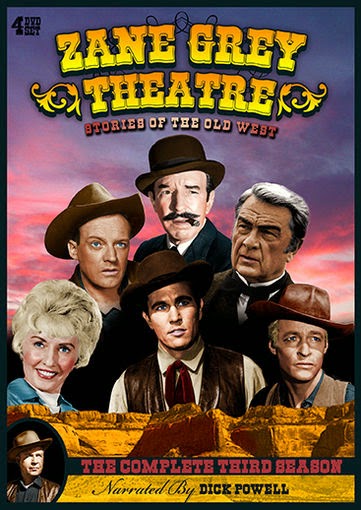 Largely unknown today, the anthology series was a television mainstay for decades.  While most series focus on a group of people seen week-in and week-out, an anthology, like a collection of short stories, told a different story with different characters with each outing.  Interestingly, only the shows based on suspense of the supernatural – TWILIGHT ZONE and ALFRED HITCHCOCK PRESENTS and their imitators – persist today.  But there were two particularly notable Western anthology series and, remarkably, after years without exposure, both are now available to enjoy: Encore Western in now airing DEATH VALLEY DAYS, and Timeless Media Group has just released ZANE GREY THEATRE, season three, to home video.  We haven’t been this lucky in years!

The full name is actually DICK POWELL’S ZANE GREY THEATRE, and Powell deserves tremendous credit for creating the series.  He was remarkable talent.  Starting out singing and dancing in Busby Berkeley musicals in the 1930s, he became a big star.  But by the 1940s, those films were considered corny and dated, and his career had been marginalized.  He truly reinvented himself, stunning audiences when he returned to the screen in 1944 as Raymond Chandler’s private eye Philip Marlowe in MURDER MY SWEET.  Overnight he became a convincing tough-guy, and had a long new career.

With the coming of television, while most film people panicked, Powell and his friends saw opportunity.  In 1952 he, Ida Lupino, David Niven and Charles Boyer joined forces and created FOUR STAR PLAYHOUSE, an anthology series where each star would appear in an episode once a month.  It was highly successful and frequently imitated.   In 1956 he created DICK POWELL’S ZANE GREY THEATRE, telling half-hour western stories from a wide variety of writers and directors.  With twenty-five episodes, Aaron Spelling wrote the most.  Republic and Columbia Western journeyman John English directed the most, at 24, but Budd Boetticher did five and Sam Peckinpah did three.  From the old-timers to the young Turks, Powell attracted them all.

One of my favorites is episode #5, LEGACY OF A LEGEND, starring a pre-VIRGINIAN Lee J. Cobb that could easily have been spun off into a series.   And that happened all the time.  Unlike any other series I can think of, DICK POWELL’S ZANE GREY THEATRE was the launching pad for some excellent series.  THE RIFLEMAN began here as a single episode, as did the series that made a star out of Steve McQueen, WANTED: DEAD OR ALIVE.  The same almost happened with the series that made Nick Adams a star, THE REBEL.  The show’s creator, Andrew J. Fenady, told me that he’d already signed a deal with Dick Powell to do the show on ZANE GREY when execs at Proctor and Gamble read it and offered to buy it and commit to a series.  Powell, gentleman that he was, let Fenady out of his contract, saying that he had plenty of shows to do, and wishing him luck.

In season three there are two episodes which became backdoor pilots for series.  THE LONER became JOHNNY RINGO, starring Don Durrant as the gunfighter-turned-lawman, and Karen Sharpe as his woman.  TROUBLE AT TRES CRUCES, written and directed by Sam Peckinpah, became THE WESTERNER, starring Brian Keith as drifter Dave Blassingame.  Although it only lasted thirteen episodes, many consider it a high water-mark for TV Westerns, and it’s a delight to have one more show, the very first one, and with guest star Neville Brand no less!

Dick Powell appears at the beginning of nearly every episode, after the opening teaser, offering an often pun-filled introduction, and imparting interesting nuggets of history along the way.  Not seen in many years, I don’t know the story of the films’ care and preservation, but I get the feeling we are lucky to have them.  At least one episode is without audio over the end titles, and several episodes have the occasional grease-pencil mark, indicating that they were taken not from finished reels but from editor’s work-print copies.  The quality over-all is excellent.

One of the ironies of the series is that while many plots could be described as in the style or tradition of RIDERS OF THE PURPLE SAGE author Zane Grey, in five seasons, only six of his stories were actually used, and none after season two.  Timeless Media Group and Shout! Factory have taken an unusual step to remedy the situation.  The fourth disc includes the last five episodes of Season 3, plus the feature film ZANE GREY’S FIGHTING CARAVANS (1931), an excellent Western starring an impossibly young and handsome Gary Cooper and the beautiful Lily Damita.

With the level of talent in the writing, directing, acting, and over-all production in DICK POWELL’S ZANE GREY THEATRE, putting on each new episode is like opening a gift – you know you’ll get a surprise of excellent quality.  Season 3, priced at $24.93 (list price $29.93) can be purchased direct from Shout! Factory HERE.

THE AUTRY ‘WHAT IS A WESTERN?’ SERIES SCREENINGS FOR 2015 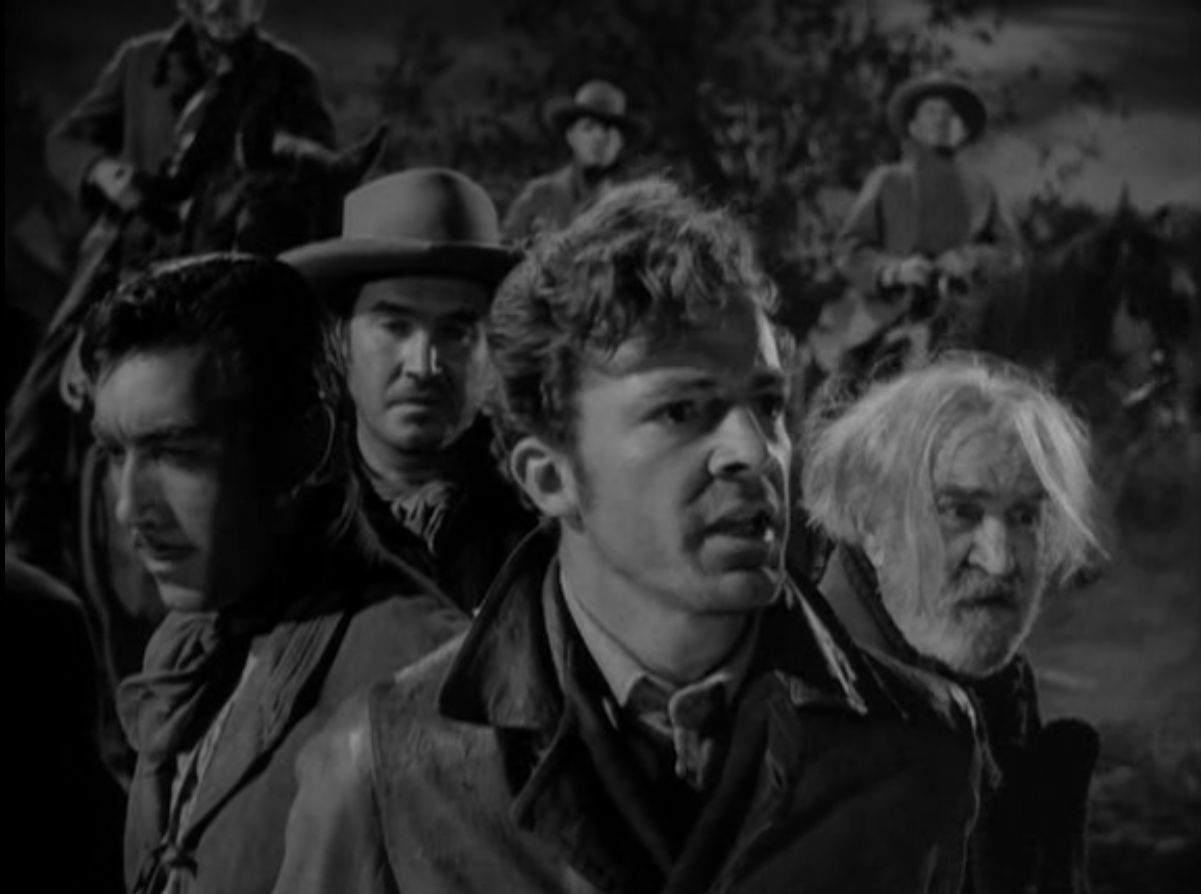 from THE OX-BOW INCIDENT

For several years now, The Autry has presented a monthly Saturday film screening under the heading of ‘What is a Western?’, with an entertaining and informative introduction by the Gamble Curator of Western History, Popular Culture, and Firearms, Jeffrey Richardson.  I always learn a lot from his talks.  On Saturday, January 17th, before screening 1969’s TRUE GRIT, he described all the involved machinations that led to the film being made, from losing Mia Farrow, thanks to Robert Mitchum’s kibitzing, to the near casting of Elvis Presley in what became Glen Campbell’s role.

The next film, logically enough, on Saturday, February 14th, will be the Coen Brothers’ 10 Oscar-nominated 2010 TRUE GRIT, starring Jeff Bridges, Matt Damon and Hailee Steinfeld.  (Just to keep the record straight, the ’69 version only had two Oscar nominations, but it won Best Actor for John Wayne.)

There’s no film planned for March, but two great Westerns directed by Wild Bill Wellman will screen in April and May.  On April 18th it’s THE OX-BOX INCIDENT (1943), starring Henry Fonda, Dana Andrews, Anthony Quinn, and a murderous lynch-mob.  On May 9th it’s YELLOW SKY (1948) starring Gregory Peck, Anne Baxter, and Richard Widmark, from a story by the great W.R. Burnett (LITTLE CAESAR).

A new exhibition will open at the Museum on April 25th, EMPIRE AND LIBERTY: THE CIVIL WAR AND THE WEST.  In conjunction, the three Autumn screenings will highlight the Antebellum, Civil War, and post-war eras: on September 12th , Ronald Reagan is Custer, Errol Flynn is Jeb Stuart, and Olivia de Havilland is ‘Kat Carson’ Holliday in SANTA FE TRAIL (1940).  On October 10th, Matthew Broderick, Denzel Washington and Morgan Freeman star in the Civil War drama GLORY (1988).  On November 14th, Clint Eastwood directed and stars in one of the finest – and most shamelessly imitated – post-Civil War dramas, THE OUTLAW JOSEY WALES (1976).

Every time you attend a screening, you have the opportunity to fill out a ballot and nominate a ‘Fan Favorite’ for the December screening – 2014’s choice was Peckinpah’s RIDE THE HIGH COUNTRY.  There is one more scheduled screening of note, though not part of the series.  On Thursday (not Saturday), March 26th, at 7 p.m., see THE IRON HORSE (1924), a silent film directed by John Ford, starring George O’Brien and Madge Bellamy, and presented with a new, part live, part ‘computer-synchronized soundscape’ by composer Tom Peters.

For years the ‘What is a Western?’ series has steadfastly refused to show anything but 35mm prints, but bowing to the reality that in many cases, such prints simply do not exist, they are showing some Blu-Ray and digital versions, but the majority are still in 35mm.  To put you in the mood for February’s screening, I’m placing the trailers from both versions of TRUE GRIT below.

Who would have guessed, in our clueless-about-history time, that we would have a second mini about George Washington and the American Revolution, even as we are waiting for season two of TURN?  That series’ biggest fault was a meaningless title, when they could have used the book’s title, WASHINGTON’S SPIES, and attracted more viewers.  I’d say, at least you know what SONS OF LIBERTY is about, but there will be those who expect a spin-off from SONS OF ANARCHY.
Starring Henry Thomas as John Adams, Ben Barnes (Caspian from the NARNIA films) as Sam Adams, and BREAKING BAD’s Dean Norris (the big bald brother-in-law cop) as Benjamin Franklin, it looks pretty exciting, going by the trailer. 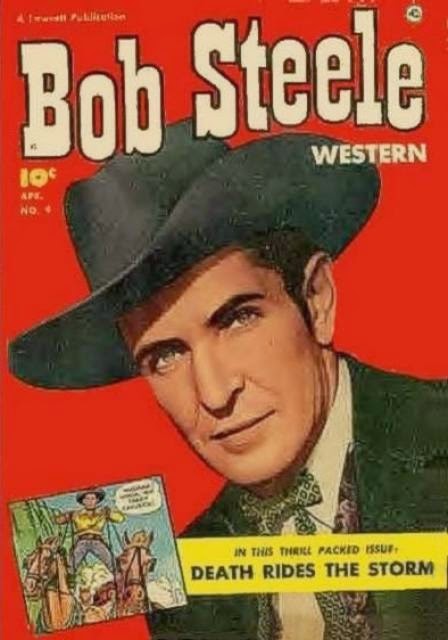 January 23rd was the birthday of two great Western icons.  Bob Steele, was born 108 years ago.  A Saturday matinee star with 239 credits (!), many of us grew up knowing him as the chilling gangster Canino in THE BIG SLEEP, or the hilariously babbling Duffy on F-TROOP.  That he was a big star for decades was a revelation!  The Music & Movie Network is celebrating by sharing his film, SMOKEY SMITH (1935), for free!  Just go to this link: http://www.movieandmusicnetwork.com/content/movieoftheday    This was announced as a one-day-only link on Friday, but I just checked, and it's still up.  Their plan is to post a different free movie to this link every day!  Incidentally, SMOKEY SMITH was written and directed by Bob’s dad, Robert N. Bradbury, and features Gabby Hayes when he was still just ‘George,’ and ‘Our Gang’ graduate Mary Kornman 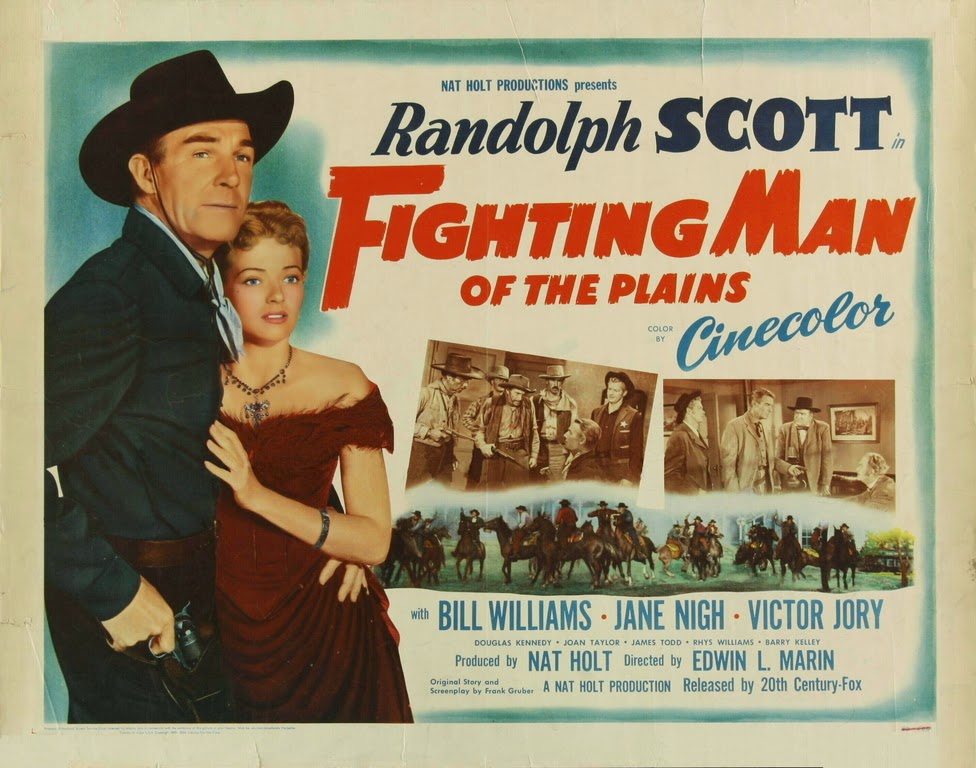 Fans of Randolph Scott are celebrating his birthday weekend with a blogathon celebrating the great southern gentleman's life and career.  Check it out HERE.

Have a great week week, and let me know what you think of SONS OF LIBERTY!