YOU MIGHT WIN THIS BEAUTIFUL WESTERN CALENDAR! PLUS 'SIX BULLETS TO HELL' HOLLYWOOD PREMIERE! 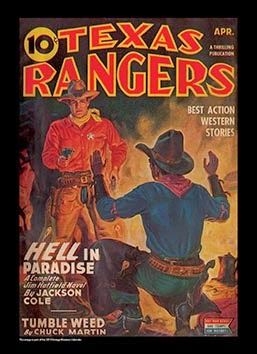 Last year I said Asgard’s was the most beautiful Western Calendar I’d ever seen.  Well, they’ve done it again!  The 2015 model is a pip – using Western Pulp covers from 1936 through 1949, and featuring the kind of florid colors and over-heated action that drew your eye and made you eagerly plunk down your dime.  The format is big – 11” by 15” – and the pulps featured include TEXAS RANGERS, RANCH ROMANCES, MASKED RIDER, SPEED WESTERN and THRILLING WESTERN.  They’re printed on high-quality heavy stock, and perforated to become a 12-piece print collection when the year is finished.   There’s also a smaller desk-top version.  It retails for $21.95.  HERE is the link to Asgard Press, who have many other beautiful calendars as well. 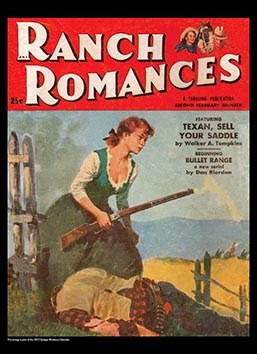 BUT IF YOU’D LIKE TO TRY AND WIN YOUR CALENDAR instead of buying, here’s your chance!  Answer these three questions about three great Western writers who started out in the pulps and other magazines:

1.) Max Brand, under his own name and five pseudonyms, wrote more than 500 novels and about as many short stories.  He died young, in 1944 when, as a Harper’s Magazine war correspondent in Italy, he was killed by shrapnel.  Although best known for his cowboy stories, his most famous character was in another profession, featured in a hugely successful series of MGM features in the 1930s and 1940s, and on TV in the 1960s.  Name the character.

2.) Writer Frederick Dilley Glidden is my favorite Western writer, because every line of dialogue he wrote sounded like Randolph Scott said it.  In fact, two of his novels were adapted into Randolph Scott movies – CORONER CREEK and ALBUQUERQUE.  RAMROD and BLOOD ON THE MOON were also based on his novels.  Name his nom de plume, borrowed from a real Old West gunfighter and Tombstone and Dodge City regular.

3.)   Once a dentist (like Doc Holliday), Zane Grey’s many novels include RIDERS OF THE PURPLE SAGE, THE VANISHING AMERICAN, and have been filmed over a hundred times.  Always athletic, he went to college on a baseball scholarship, but in later life his interest turned to a far different sport, one more commonly associated with Ernest Hemingway and John Steinbeck.  Name the sport. 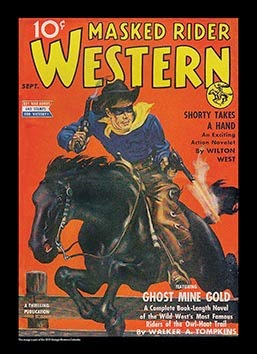 Send your answers to swansongmail@sbcglobal.net , and please put WESTERN CALENDAR CONTEST in the subject line!  On Friday I’ll put on a mask – not the Masked Rider or Lone Ranger kind, but one I can’t see through – pick a winner from among all correct entries, and I’ll put it in the mail on Saturday!  Good luck! 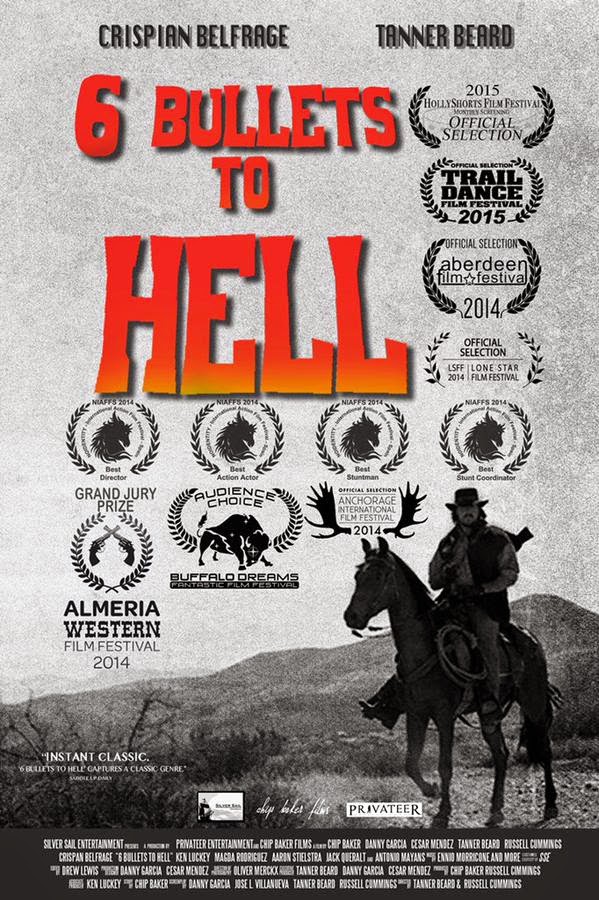 On Thursday, January 15th at 7 p.m., ‘6 BULLETS TO HELL’ will have its Hollywood premiere at the Chinese Theatre #4, as part of the monthly HollyShorts Screening Series.   If you’re a Round-up regular, you’ve been hearing about 6 BULLETS since they first rolled camera in July of 2013. 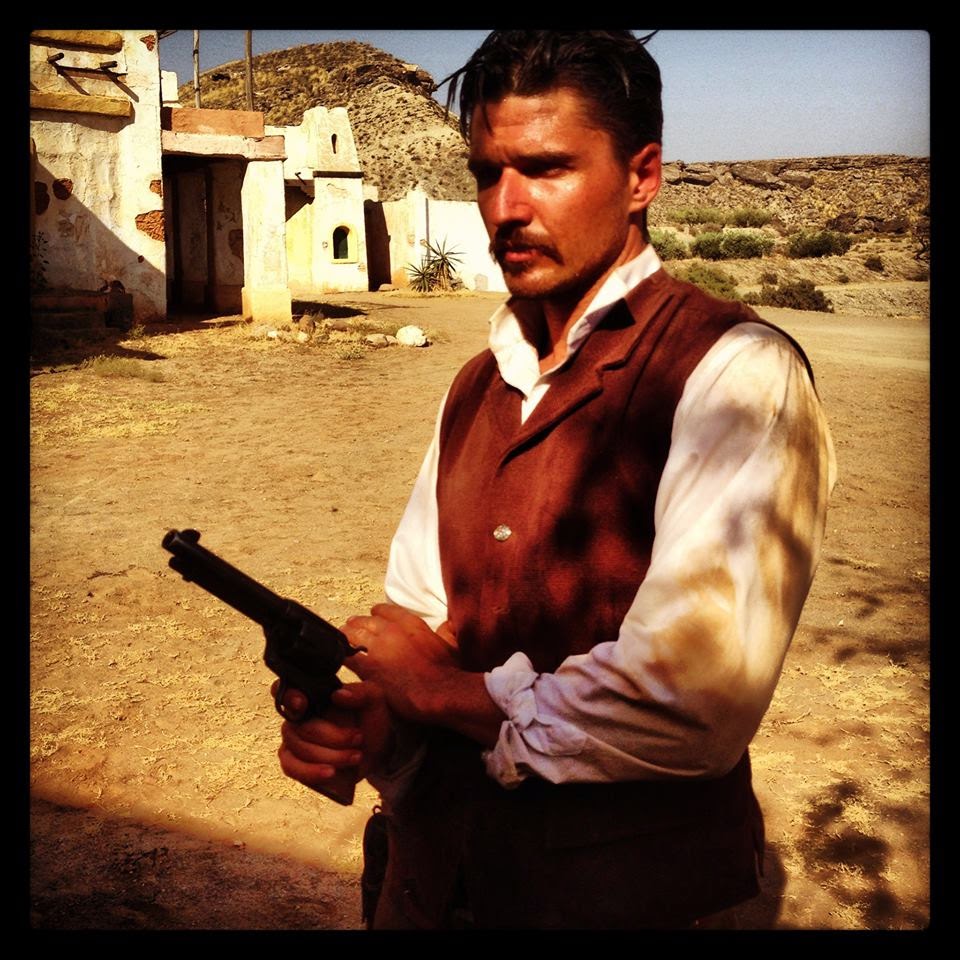 An outgrowth of friendships formed at the Almeria Western Film Festival, this homage to oeuvre of Sergio Leone was filmed in Tabernas, Almeria Spain, at MiniHollywood and at Fort Bravo, the fabled stomping grounds of Clint Eastwood, Lee Van Cleef, Jack Palance, Franco Nero – really everyone involved with the roughly 800 Spaghetti Westerns produced in the 1960s and 1970s.
It’s the story of former lawman-turned-farmer Billy Rogers (Crispian Belfrage), who once again straps on his guns to avenge the brutal murder of his wife by ruthless bandit Bobby Durango (Tanner Beard) and his despicable gang. 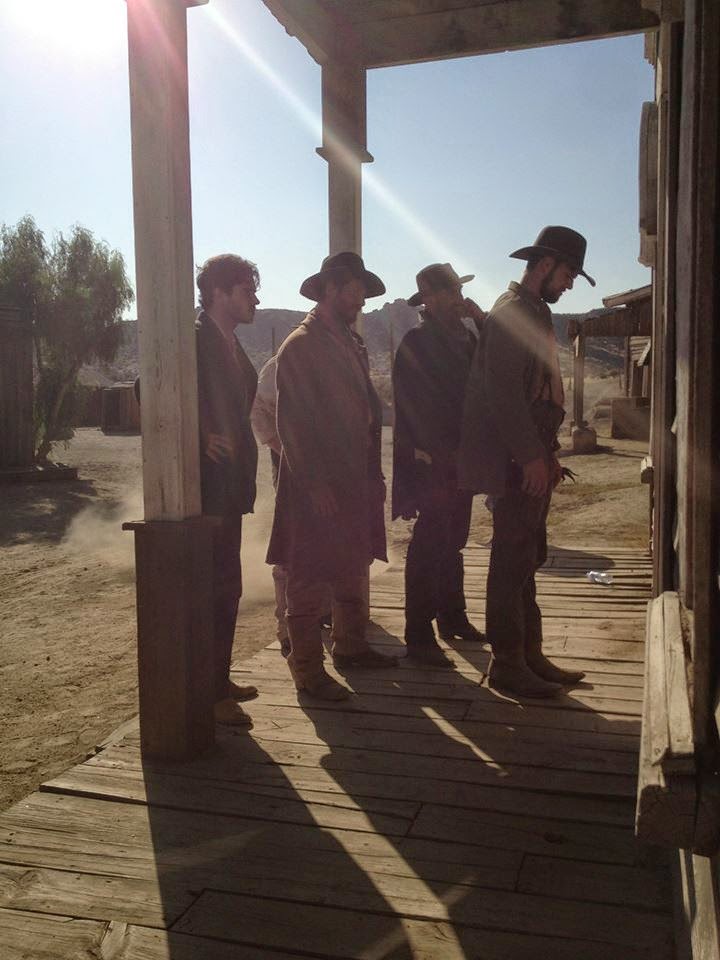 It’s co-directed by Tanner Beard, who previously directed the excellent LEGEND OF HELL’S GATE, and Russell Quinn Cummings who co-starred in HELL’S GATE, and plays Sheriff Morris in 6 GUNS.  Also in the cast is Spaghetti Western veteran Antonio Mayans (TOWN CALLED HELL, MORE DOLLARS FOR THE MAGREGGORS), and Aaron Stielstra, who gave a chilling performance in the recent THE SCARLET WORM.  Members of the cast and crew are expected to attend.  To reserve your ticket, go HERE. Shoreline Village in Long Beach, a place better known for fishing than fast-draws, will celebrate the first of what’s planned as an annual free event, BUCKAROO DAYS.  The fun starts at one p.m. both days, and run ‘til 6 on Saturday and 4:30 on Sunday – don’t miss the ‘Farewell Shoot-out’ at 4 pm!  Among the activities and entertainments will be black-smithing, gold panning, Faro playing, shootouts (they often follows Faro playing), line-dancing, swearing-in of junior deputies, gun-slinging, trick roping, and music by The Fiddle and Pine Band, and the BillHillys – who’ll give your kids lessons for playing on a washboard!  There’ll be a rope-maker working in front of RainDance, the American Indian store, and the Kids’ Corral, with games and such for the youngins’, will be open all day, both days. 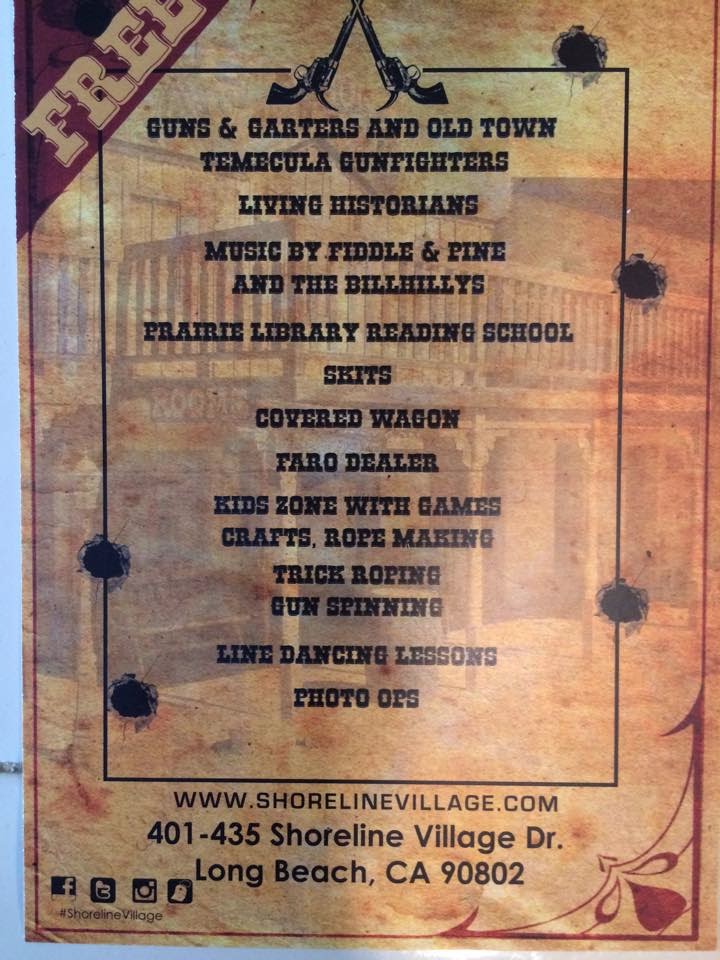 ‘TRUE GRIT’ – THE WAYNE ONE – SATURDAY AT THE AUTRY!

Saturday, January 16th, at 1:30 pm in the Wells Fargo Theatre, The Autry will screen TRUE GRIT (1969) as part of their ‘What is a Western?’ series.  It’s easy to think the glory days of American Westerns were over by 1969, but that was also the year of THE WILD BUNCH, BUTCH CASSIDY, THE UNDEFEATED, and MACKENNA’S GOLD.  Guys like Wayne were getting old, but they knew their stuff, as did director Henry Hathaway.  When the Coen Brothers did their excellent remake forty years later, the original was widely dis’d and dismissed by folks who had clearly not seen it in years, and recalled it as corny.  Nonsense: TRUE GRIT is a very tough movie, beautifully shot by Lucien Ballard, with a wonderful score by Elmer Bernstein, and directed with the unflinching guts that only a tough old bastard (and I mean that in the most respectful way) like Hathaway could muster.  The wonderful cast, in addition to the Oscar-winning performance by Wayne, includes Robert Duvall, Jeremy Slate, Dennis Hopper, and Strother Martin – who was also in both WILD BUNCH and BUTCH CASSIDY: what a year he had!  Glen Campbell, a great musician but untrained actor, was always sheepish about his performance, but he did just fine.  And Kim Darby, as Mattie Ross, the bossy little gal who hires Wayne to catch her dad’s killer, gives the performance of her career.

With the remake, much was said, by the Coen brothers among others, about it not being a remake, but a return to the original novel.  That’s a load of crap, because it implies that the Hathaway version strayed far from the Charles Portis book.  The only major difference plot-wise, is that the Coens used the original Portis ending.  But the fact is Portis, who was on-set for the 1969 film, thought he could come up with a better ending than he’d written in the novel, and he certainly did.  SPOILER ALERT!  Incidentally, I have it on good authority that when word got out that the Coens were going with the novel’s ending, featuring an old Addie Ross, Kim Darby  very much wanted to play that role.  Elizabeth Marvel did an admirable job in the part.  But it would have meant so much more if Kim Darby had played it.

TRUE GRIT will be introduced with a discussion led by Jeffrey Richardson, curator of Popular Culture and of the Gamble Firearms Collection.

Sorry I’m posting a day late!  I thought it would be Sunday, but I had to finish reading a novel and writing a cover blurb, had to steam wallpaper off the dining room walls, and when I came home had to help an elderly neighbor who was calling – “Help! I’ve fallen, and I can’t get up!” Honest!  I’ve just read a wonderful book, KNOTT’S PRESERVED, about the fabled California theme park Knott’s Berry Farm.  I interviewed one of its authors, J. Eric Lynxwiler, last week, and will have my review and interview in the next week or two.