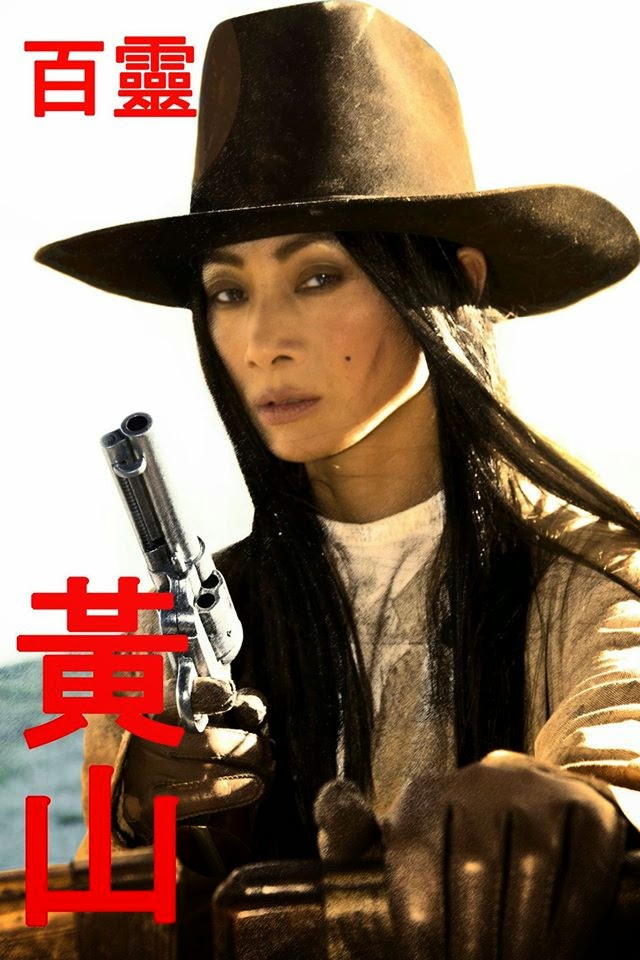 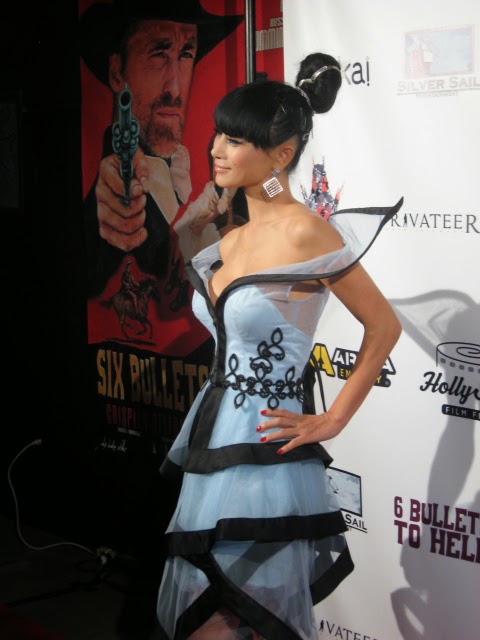 Bai Ling at the 6 BULLETS TO HELL premiere

Just about a year ago, I got wind that actress Bai Ling, the exotic Chinese-born beauty who made such a powerful impression in THE CROW opposite Brandon Lee, was producing and starring in a short Western, YELLOW HILL – THE STRANGER’S TALE.  The goal, not surprisingly, was to have not just a stand-alone short, but a proof-of-concept for a feature.  Bai Ling is no stranger to the genre, having been featured – strikingly – in the WILD WILD WEST movie.  In YELLOW HILL, however, she plays a less glamorous role, a young woman searching for her father in gold rush towns.  I interviewed YELLOW HILL’s director Ross Bigley at the time – HERE is the link to that article. 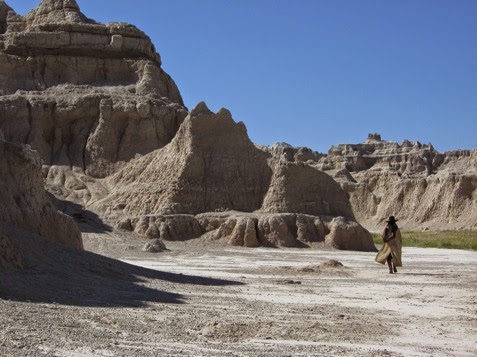 As good fortune would have it, I met Bai Ling for the first time at the Hollywood premiere of 6 BULLETS TO HELL just a week or two ago – you can read that piece HERE –  and soon after, I heard from director Ross Bigley, who sent me the Vimeo link to the entire short film – not just a clip – to share with my Round-up readers.  Enjoy!  (P.S. – today I saw this photo on Facebook from fellow Western-nut John Crummett, who captioned it: “Last spring when my wife, Tuco and I stopped at this frontier town (1880's Town, Murdo, South Dakota), in the middle of nowhere in western South Dakota, they told us that Bai Ling had shot a short western film in their Western Town/Fort area a while back.”) 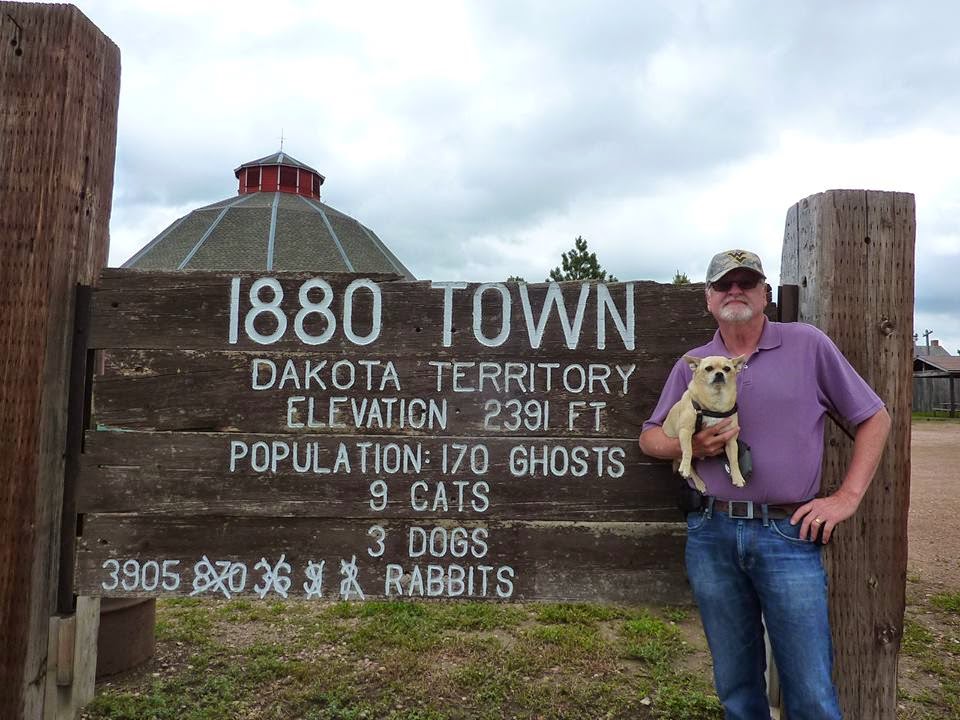 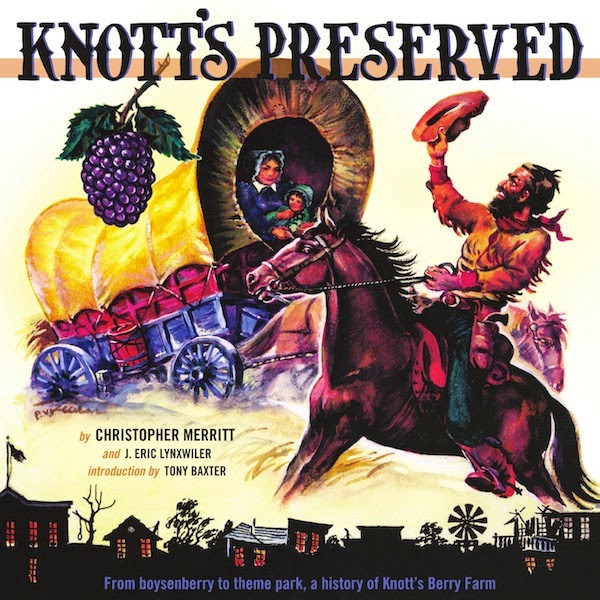 When I was a kid in New York City, going to used book stores, I always snapped up any 1950s and ‘60s back issues of TRUE WEST that I could find.  Somewhere in the back of each one would be an ad promoting a visit to Knott’s Berry Farm in Southern California.  I couldn’t quite figure out what the place was – I mean, it looked like it had a Western theme, but who would name an amusement park a ‘Berry Farm’?  When I moved to L.A., it was still a few years before I got to Knott’s, because Universal Studios was right in town, and if you were going as far as Orange County, you were going to Disneyland. 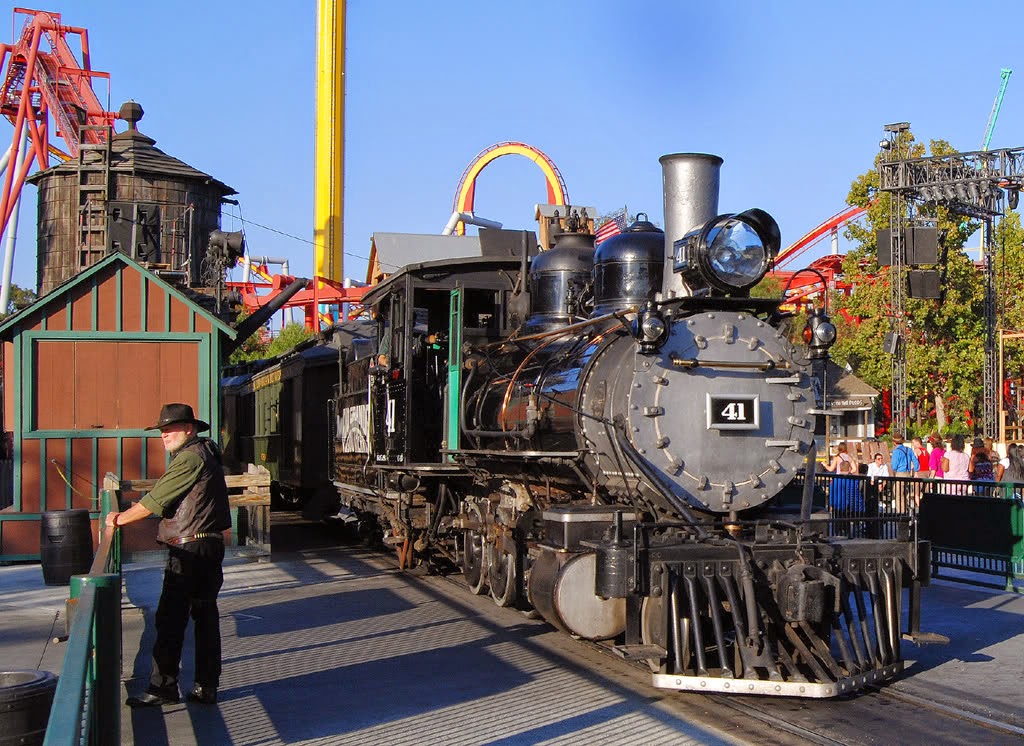 But finally my wife and daughter and I went – initially for the little-kid-aimed Camp Snoopy – and I was amazed to see what I’d been passing up.  In addition to the small-fry shows and rides, and the big thrill rides, there were blocks of old western ‘ghost town’ streets, a stunt show, panning for gold – coached by geezers who knew their stuff, full-sized stagecoaches to bounce around in, and a full-sized steam-train to ride – with a hold-up guaranteed!  And the authenticity was remarkable: I took a photo of the Bird Cage Theatre facade at Knott’s, mixed it in with the pictures I took at the real place in Tombstone, and no one has ever called me on it. 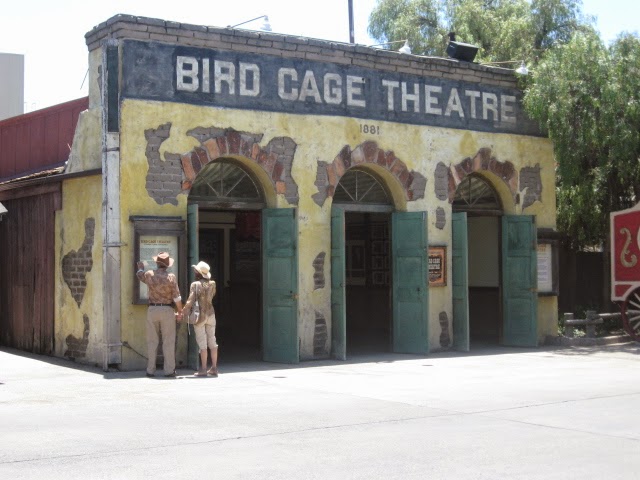 Here and there I’ve gathered a little bit of knowledge on the history of Knott’s, and now that I’ve read Merritt’s and Lynxwiler’s fascinating book, I’ve learned that practically everything I’d learned before was wrong.

The true story begins in 1920, when farmer Walter Knott and his wife Cordelia arrived in Buena Park, California in their Model-T Ford, and began a farm which would become the world-famous Knott’s Berry Farm -- birthplace of the Boysenberry -- and which would morph into America’s first theme park: and this was 35 years before Disneyland opened nearby! 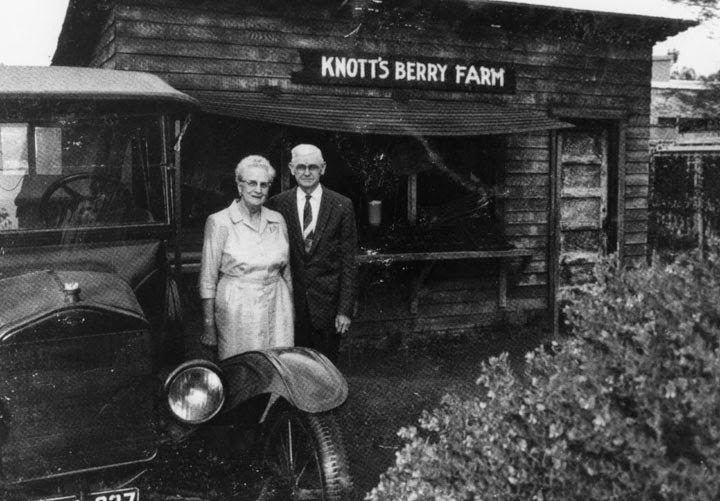 Walter and Cordelia Knott at the original berry stand

The centerpiece of Knott’s was, and still is, Cordelia’s fried chicken restaurant.  It was so good, and such a good deal, that even at the height of the Great Depression, people were waiting on multi-hour lines to be seated and served.  In fact, the theme park that is Knott’s grew from a series of happy distractions Walter Knott created to entertain the folks standing in line.  Though not an artist per se, Knott was a natural-born entertainer and businessman, with a great eye for choosing artists, architects, and others with talent. 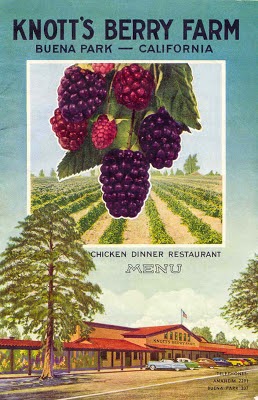 The book, lavishly illustrated with photographs and memorabilia, traces the growth of Knott’s from the fruit stand to the restaurant, to the amusing illusions, to the start of the legendary ghost town, the evolution into the amusement park, and beyond.  The authors have both worked at Knott’s themselves, and bring a warm and personal perspective to their telling of the delightful history of the place.  The two Walts – Knott and Disney – were good friends, so it’s fascinating how differently their showplaces developed.  While Disney had a master plan completed before opening, Knott just added on attractions as needed, leasing spaces to independent showmen who built their own presentations.  The ghost town was the start of the entertainment, and Knott, a very religious man, nonetheless had a brothel built as the very first structure on the street, reasoning that no mining town could exist long without one!  He was as dedicated to history as he was to humor. 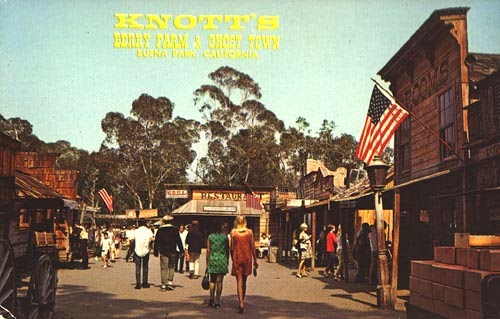 Included are the stories of the artists who designed and built the displays and streets and exhibitions, as well as memories of the many live performers and professional ‘characters’ who have populated the place over the decades.  Of course, when an institution has survived as long as Knott’s, changes are inevitable, and one reads somewhat wistfully about presentations that are now long gone.  On the other hand, an amazing amount of ‘original’ Knott’s is still standing.  I’ve personally been to Knott’s about half a dozen times, always had a great time, but I’m startled to realize how much I have missed.  At amusement parks I travel from ride to ride and show to show, giving little attention to the spaces in-between.  As a park which was built for strolling long before the rides appeared, I realize I hurried right by some of the most entertaining aspects of Knott’s.  It will be a very different visit next time.  Knott’s Preserved, is a large (9” x 9”) beautiful hardcover book, 160 pages long, published by Angel City Press for $40.  I know it makes a great gift, because my daughter gave it to me! My interview with co-author J. Eric Lynxwiler will run in next week’s Round-up.  You can buy the book from Angel City Press by going HERE.

LEWIS AND CLARK MINISERIES A GO AT HBO! 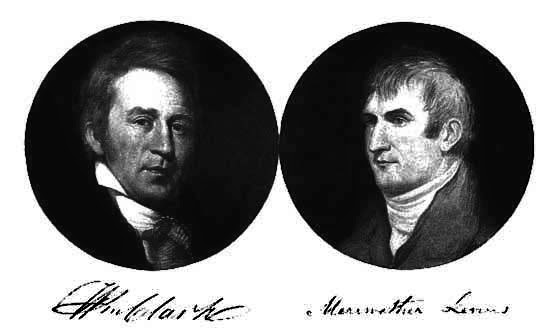 Based on historian Stephen Ambrose’s brilliant UNDAUNTED COURAGE, this long in-development project has now officially been green-lighted.  It’s the true story of the Corps of Discovery, sent by President Thomas Jefferson to map the country west of the Mississippi, and make first contact with many American Indian tribes. Casey Affleck, Oscar-nominated for his performance as dirty little coward Bob Ford in THE ASSASSINATION OF JESSE JAMES, will play Meriwether Lewis.  Belgian-born Matthias Schoenaerts, a star of the soon-to-be-seen FAR FROM THE MADDING CROWD remake, will play William Clark. 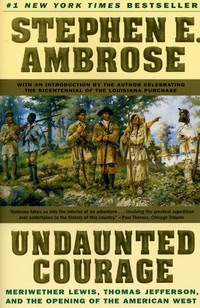 Details are scarce at this point, and no other cast members have yet been announced.  John Curran is the director and co-writer, best known for directing THE PAINTED VEIL, and he previously adapted the Jim Thompson novel, THE KILLER INSIDE ME, which starred Affleck.  The other writer on the project is Michelle Ashford, who previously wrote an episode of the JOHN ADAMS miniseries, and was Emmy-nominated for her work on THE PACIFIC. 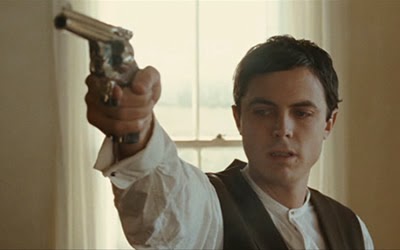 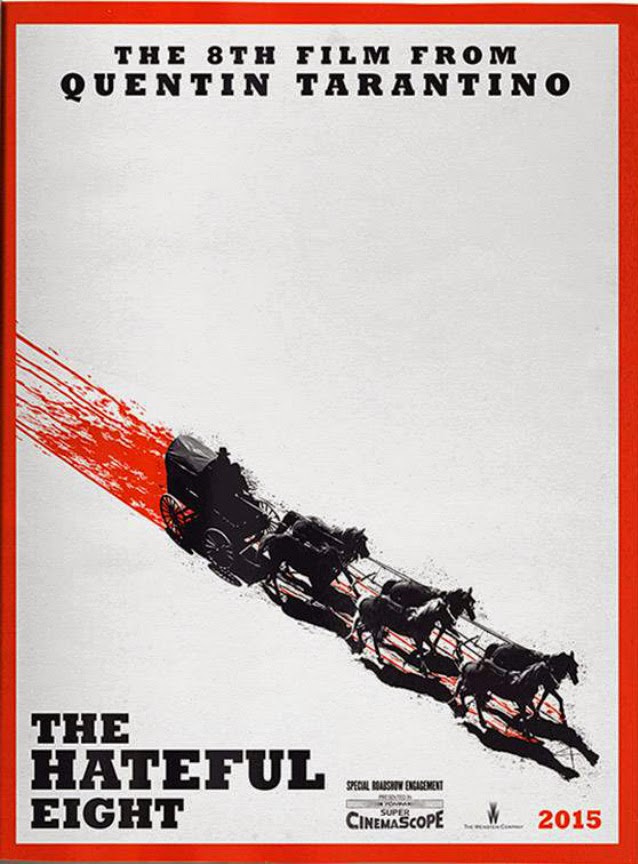 Word comes from Variety that cameras using actual film and huge anamorphic lenses are rolling in Telluride, Colorado for the Quentin Tarantino’s much-anticipated – and for a while cancelled – follow-up to his hugely successful DJANGO UNCHAINED.  The story of stage-coach travelers forced by a blizzard into close quarters stars Channing Tatum, Walter Goggins, Samuel L. Jackson, Jennifer Jason Leigh, Tim Roth, Kurt Russell, Michael Madsen, and Bruce Dern.  Just added to the cast is Lee Horsley, who played Sheriff Gus in DJANGO UNCHAINED, and whose numerous Western credits include the series HAWKEYE, SNOWY RIVER: THE MACGREGOR SAGA, and exceptional and under-appreciated series PARADISE, a.k.a. GUNS OF PARADISE. 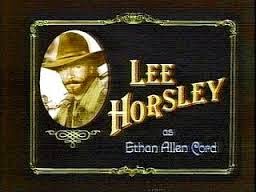 Next week, as mentioned above, I’ll have my interview with KNOTT’S PRESERVED author Eric Lynxwiler, and in the near future I’ll be reviewing YOUR FRIEND AND MINE, ANDY DEVINE by his son, Dennis Devine; Gene Autry DVD Collection #8; a pair of fascinating silent Westerns from Grapevine Video featuring all-but-forgotten Western star Lester Cuneo; and from The Criterion Collection, John Ford’s MY DARLING CLEMENTINE, and a double-bill from Monte Hellman, THE SHOOTING and RIDE THE WHIRLWIND.  Have a great week!