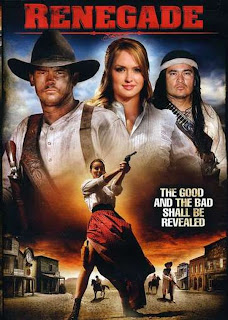 I don’t know how I missed this one.  This heartfelt little Western slipped out from Barnholtz Entertainment in September to very little fanfare, but it’s well worth a look.  RENEGADE, originally titled MATTIE, takes place during the gold rush, and stars fetching Kaylee Defer, of GOSSIP GIRL and , as Mattie Springer.  In her late teens, her mother has recently died in a cholera epidemic, and she has taken her mother’s place in helping dad raise three younger sisters and a brother. 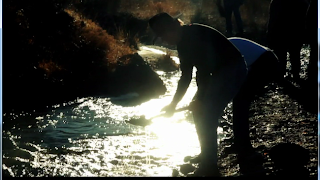 Then a handsome man named Zeb (Ryan Doom) comes to the prospecting community, sweeps Mattie off her feet, and she’s soon married to him, sharing his mine-shack home, along with his partner and brother Jacob (Ric Maddox).  But it’s a pity she didn’t meet the quieter, more steadfast brother first.  While Jacob stays home and works the mine, keeping house with his sister-in-law, husband Zeb is never home long, always searching for another, better claim. 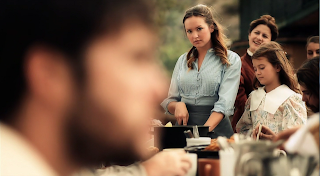 Mattie sees Zeb
Not surprising in a community looking for quick riches, the specter of danger is always lurking in the shadows, here in the persons of a band of comancheros who prey on the miners at their isolated claims, willing to kill for a sprinkle of gold dust.  Soon after she marries, much of Mattie’s family is slaughtered by the roaming band, and she then has the added responsibility of raising the survivors. 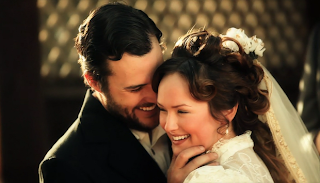 RENEGADE has bursts of violence, but the story is more about Mattie’s personal struggles than the life-and-death kind.  While the action is sudden and often intense, the stand-out moments are not elaborate showdowns but character scenes.  Shot on locations and ranches around , much of cinematographer Winston Ashley Maddox’s work is startling beautiful; not just for his inclusion of stark and stunning landscapes, but also for creative use of lighting and composition.  Images of a sheriff rescuing a smoking Bible from a torched house, and a man weeping on a porch after learning of a loved-one’s death, linger in the memory.  Much of the story is told in unobtrusive narration by Mattie, and here both camerawork, and editing by Kyle Lovrein, primarily a visual effects specialist, shine in the seamless flow of scenes of the lives of the miners and townsfolk, helped in large degree by Brian Helms’ production design and art direction, and Georgia Goodwin’s costume design. 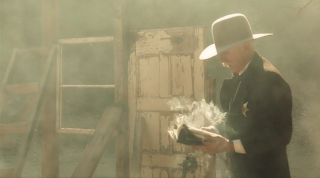 First-time feature director Michael Dohrmann co-wrote the screenplay with fellow tyro James Purdy, and they did an admirable job, especially for a first-time effort.  There are weaknesses; the plot ambles along pleasantly, rather than charging ahead, and while George Chatalis looks and plays the sheriff well, you can’t understand why, as the locals are picked off, neither he nor anyone else makes a concerted effort to track the villains down.  In a particularly disconcerting choice, Lou Pimber plays Chuy, an outlaw who is clearly costumed as a Hollywood Apache, but speaks like a ‘stinking badges’ Mexican bandito. 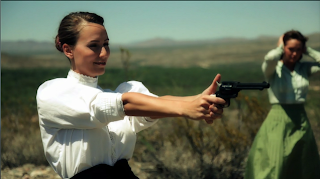 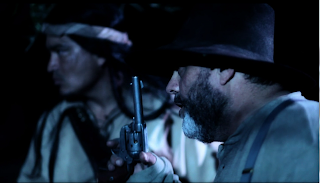 The performances vary.  Kaylee Defer, whose character must carry the story, is the greatest strength of the cast.  Interestingly, the women have the best-written parts, and are the best actors.  Quincy Cooper, in a small role as Mattie’s cousin Ellen, shines; and Danielle Demski as the Parson’s wife Clara is a delight, especially in the scene where she teaches Mattie to shoot.  Many of the supporting roles are played by obvious non-pros, and among the men only Ric Maddox gets to emerge enough from his stoicism to bring his character to life. 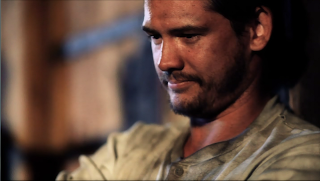 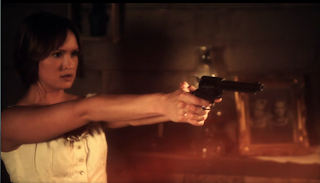 RENEGADE is a very enjoyable look at a feisty (without being shrill and strident) young woman’s life in a mining camp, and well worth tracking down.  The budget clearly was tight, but every dollar is up on the screen.  And don’t be put off, as I was initially, by an opening sequence with jerky hand-held camerawork.  The vast majority of the picture is effectively-to-beautifully shot. 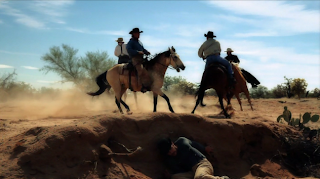 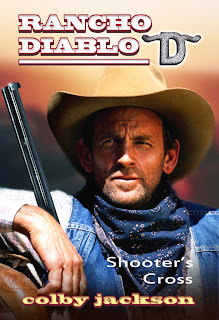 Before you say, ‘I never heard of Colby Jackson,’ let me assure you’ve heard of at least a third of him.  Colby Jackson is the collective pseudonym of three writers who have written hundreds of novels, under their own names and house names.  Bill Crider’s western books include Galveston Gunman, Ryan Rides Back, A Time for Hanging, Outrage at Blanco, and Texas Vigilante.  James Reasoner has written, among many others, the series, Sons of Texas series, Patriots series, Civil War Battle series, Judge Earl Stark series, and several entries in the Longarm series.  Mel Odom has never written a western before, but he’s written over 170 books in every other conceivable genre.


The first book is RANCHO DIABLO: SHOOTER’S CROSS, and here’s the official synopsis: Army Scout Sam Blaylock wasn’t looking for trouble when he rode into Shooter’s Cross, a small Texas town with a colorful history, but he found trouble in spades. After being nearly killed in an ambush, Sam discovers a patch of land where he thinks he can settle his family, put down roots, and build a future. Unfortunately, that land has poisoned water and rumors of ghosts. Sam’s figured a way to fix the water problem, and he’s never been a big believer in ghosts, but he hadn’t planned on running up against newspaperman Mitchell McCarthy, who’s willing to kill to take Rancho Diablo now that Sam has turned the land into a profitable enterprise. Sam enlists the aid of two friends from the army – fast talking Duane Beatty and gunhawk and fellow scout Mike Tucker – and digs in tighter than a tick to fight back.

On Sunday and Monday, March 17th and 18th, you can go to Amazon, and download the book for free. The link's HERE.  If you get it, shoot me a line at the Round-up to let me know how you liked it!

‘THE SEARCHERS’ AND A BOOK SIGNING MONDAY AT THE AERO 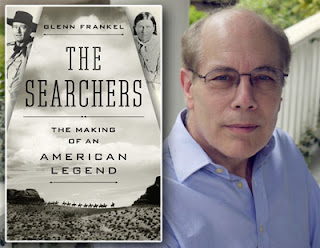 If you couldn’t get to the Autry for Saturday’s discussion and signing, on Monday, March 11th, Pulitzer Prize Winning author Glenn Frankel will be at the Aero Theatre in to sign his book, THE SEARCHERS: THE MAKING OF AN AMERICAN LEGEND, prior to a screening of the film.  The signing is at 6:30 pm, the screening at 7:30 pm. 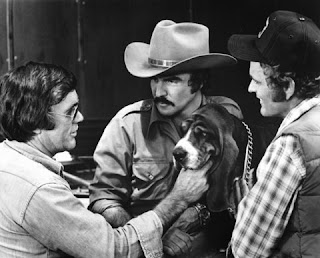 
The man who went from taking falls for Burt Reynolds to directing him, and who just received an honorary Oscar for a career of bravery (you can read more about him HERE ) Hal Needham will be appearing at the Aero on Friday, March 15th, to sign his book, STUNTMAN!, prior to screenings of two of the twenty films he’s directed, SMOKEY AND THE BANDIT and CANNONBALL RUN. 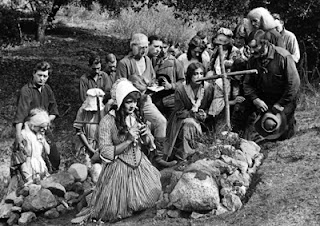 As part of the UCLA Billy Wilder Theatre festival of recently preserved films, on Monday, March 18th at 7:30 pm, the Wilder will be screening THE ARGONAUTS OF CALIFORNIA – 1849 (1916), a 12-reel story of the gold-fields shot in Monrovia, before Hollywood became the center of California film production.  It will be presented with a live musical accompaniment by Robert Israel.  This will be followed by a one-reel from 1914, starring the screen’s first cowboy star, Bronco Billy Anderson in BRONCO BILLY’S WILD RIDE.
On Saturday, March 23rd, at 4 pm, the Wilder will present an all-but-impossible-to-see TV episode from the anthology series ABC STAGE 67, NOON WINE (1966), based on Katherine Ann Porter’s story, written and directed by Sam Peckinpah, and starring Jason Robards, Theodore Bikel, and Olivia De Havilland.  And Theodore Bikel will attend.  It will be followed by another episode, THE HUMAN VOICE, starring Ingrid Bergman, and directed by Ted Kotcheff from Jean Cocteau’s play.  You can learn more about these and other screenings in the series HERE 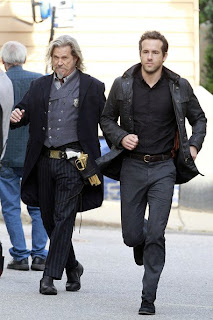 Universal has announced that R.I.P.D., a summer 2013 release based on the Dark Horse comic of the same name, already in the can, will be post-adapted to 3D.  The film, a big-budget crime-comedy, stars Ryan Reynolds as a cop who is murdered and ends up in the Rest In Peace Department, a police department of the dead, and turns to Jeff Bridges, an old-West lawman, to help solve his own murder.  Also in the cast are Kevin Bacon and Mary Louise Parker.


That’s all for this week!  Next week I’ll have a report from the set of QUICK DRAW, and an interview with Kevin Sorbo about his upcoming Hallmark Movie Channel western, SHADOW ON THE MESA!
Happy Trails,