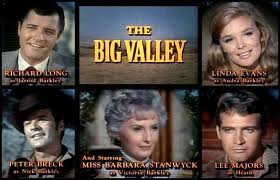 Longtime Rounders know that the Round-up has been cheer-leading for the BIG VALLEY feature ever since it was announced back in 2010.  We’ve followed through cast changes – from Susan Sarandon to Jessica Lange in Barbara Stanwyck’s role as matriarch Victoria Barkley.  We gleefully reported when Lee Majors, Heath from the original series, was cast to play his own father, Tom Barkley, in the feature --  in fact, the Round-up post entitled HEATH’S REVENGE is by-far the most-read post in Round-up history (read it HERE.) 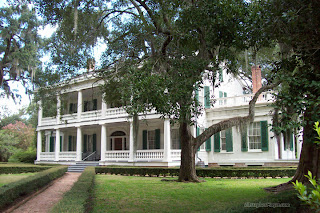 Barkley home in the feature

A cast was assembled, cameras rolled, and a large portion of the script (I don’t know how much) was shot.  Then production shut down, and getting further information proved impossible for months.  The problem, it turns out, was with director and co-writer Daniel Adams.  Among his previous credits, he wrote and directed THE GOLDEN BOYS (2008), starring David Carradine, Rip Torn and Bruce Dern, and THE LIGHTKEEPERS (2009), starring Richard Dreyfus, Bruce Dern, Julie Harris and Blythe Danner, both filmed in .  As an incentive to filmmakers, that state offers a 25% tax credit for payroll and other filmmaking costs.  has been tried and convicted of overstating his expenses, as a result receiving an overpayment of $4,377,000.  For example, he claimed to have paid Richard Dreyfus $2.5 million for his role in LIGHTKEEPERS, when the actual fee was $400,000.  has been sentenced to 2 to 3 years in prison, plus ten years probation, plus restitution of the nearly four and a half million dollars. 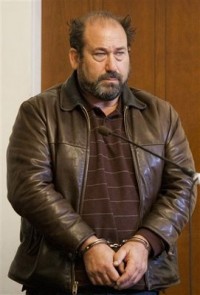 Director Daniel Adams
Kate Edelman Johnson is not only the movie’s producer, her father, Louis F. Edelman, co-created the original series with A. I. Bezzerides.  Not up for a full interview at this time, she told me, “We have been delayed.  I’m trying to work things out as this is a project that needs to be produced.  It’s a bit premature to discuss anything right now, but rest assured, I will let you know the moment things are back on track and it’s full steam ahead.  Believe me, this is a labor of love for me, and a way to honor the memories of two people who I dearly loved – my father and Barbara Stanwyck.” 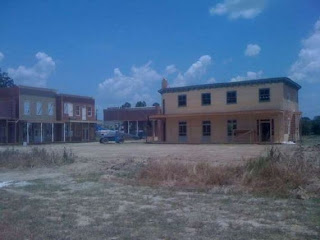 Set construction
The new film’s cast includes Sara Paxton in Linda Evans’ role of Audra Barkley, Jason Alan Smith in the late Peter Breck’s role of Nick Barkley, and Travis Fimmel in Lee Major’s role of Heath.  Stephen Moyer of TRUE BLOOD fame was announced in the late Richard Long’s role as Jarrod Barkley, but now no one is listed for that part.  Also in the cast are Richard Dreyfus and Bruce Dern, who both guested on the original series.  Dreyfus plays the real-life banker and railroad magnate Charles Crocker. 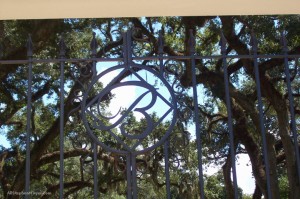 Barkley monogram on the gate


Other actors of note in the cast are Aidan Quinn, John Savage, and western icon Buck Taylor.  Until the feature is completed, you can get your Barkley Family fix by watching the original BIG VALLEY series daily on INSP and on ME-TV.

Hal Needham, Burt Reynolds and Jerry Reed from SMOKEY AND THE BANDIT


Hal Needham, whose stunt credits go back to THE SPIRIT OF ST LOUIS (1957), and include 310 features, 4500 TV episodes and 56 broken bones, will receive an award recognizing a career of calculated risk-taking.  Western credits include HAVE GUN, WILL TRAVEL; HOW THE WEST WAS WON; LARAMIE; LITTLE BIG MAN; CHISUM; THE WAR WAGON, and others too numerous to list here.  Long associated with Burt Reynolds, with whom he worked on GUNSMOKE episodes, 100 RIFLES, and THE MAN WHO LOVED CAT DANCING, Burt gave Needham a chance to direct, with the SMOKEY AND THE BANDIT and CANNONBALL RUN franchises, and HOOPER.  has directed 20 features to date.  He also won a Scientific and Engineering Award from the Academy in 1986 for the Shotmaker Elite camera- car and crane, allowing greater freedom shooting action sequences.  He also is a co-founder of Stunts Unlimited.

WESTERN WRITERS OF on the Direct-to-DVD Trail 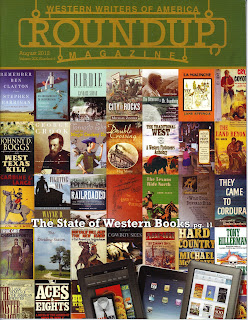 I was flattered to be interviewed by C. Courtney Joyner for the August issue of ROUNDUP MAGAZINE (not my Round-up, you understand), the official publication of the Western Writers of America.  The subject was one that Rounders know is dear to my heart, Direct-to-DVD Westerns. 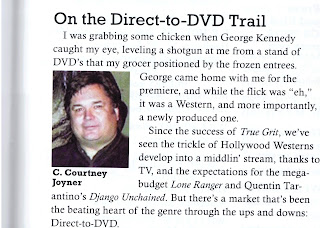 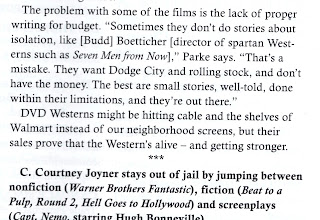 HENRY DARROW – MANOLITO OF THE ‘HIGH CHAPARRAL’ – AT THE AUTRY

Saturday, September 15th, at one p.m., Henry Darrow, who delighted audiences as Manolito on THE HIGH CHAPARRAL, will be at the Autry to take part in the Latin Heritage Month celebration, and to discuss, and sign, his new autobiography, HENRY DARROW – LIGHTNING IN THE BOTTLE, written with Jan Pippins. 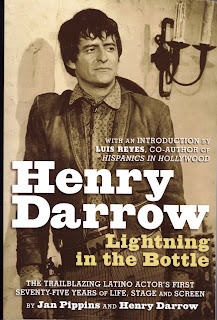 In addition to other Latin Heritage-themed activities, starting at 11 a.m., episodes of HIGH CHAPARRAL and the 1990s ZORRO series, all starring Mr. Darrow, will be screened in the Wells Fargo Theatre.

And speaking of Manolito and ‘THE HIGH CHAPARRAL’, also on Saturday, September 15th, after years of absence from television, INSP welcomes ‘HIGH CHAPARRAL’ back with a marathon, after which it will become part of their regular SADDLE-UP SATURDAY lineup.

EASTWOOD AT THE AERO

The American Cinemateque at the Aero is featuring several Clint Eastwood Westerns in September.  On Monday, Sept. 10th it’s a 20th anniversary screening of UNFORGIVEN; and on Tuesday, Sept. 25th it’s TWO MULES FOR SISTER SARAH, directed by Don Siegal, with an amusing score by Ennio Morricone.


‘THE GREAT SILENCE’ AT CINEFAMILY 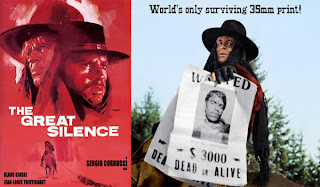 SUNDAY 9/9 -- TUESDAY 9/11, The Cinefamily, aka THE SILENT MOVIE, will play the only extant 35mm print of THE GREAT SILENCE, directed by Sergio Corbucci and starring Klaus Kinski and Jean-Louis Trintignant! Perfect for a silent theatre, since Jean-Louis's character is deaf. Fascinating spaghetti western!

‘’ WITH JEAN ARTHUR AND WILLIAM HOLDEN AT UCLA

A restored 35mm print of ‘’ ( 1940) will screen on Sunday, September 16, 2012, 7 p.m. in the Billy Wilder Theatre in the .  Part of a retrospective on Jean Arthur’s career, this story about a gutsy pioneer woman who sets her hat for an on-the-move cowboy is a delight in its own right, and has great added historical importance for western-movie lovers.  The sets that were constructed for this film, a few miles outside of Tucson, were the beginning of the Western movie-town of Old Tucson, home to over three hundred western movies and TV shows, from RIO BRAVO to WINCHESTER 73 to JOE KIDD to TOMBSTONE to THE HIGH CHAPARRAL.


Directed by Wesley Ruggles from a script by Claude Binyon, from Clarence Budington Kelland’s story, the cast includes Warren William, Porter Hall, and western stalwarts like Edgar Buchanan, Iron Eyes Cody and Kermit Maynard.  It was the first production job, as an uncredited assistant director, for Earl Bellamy, who would direct dozens of films, but become famous for directing over 1,600 TV episodes.  He also directed SPEEDTRAP, the first movie I wrote.  It’s a double feature, the second film being TOO MANY HUSBANDS (1940), a screwball comedy by the same writer and director, based on a play by Somerset Maugham, co-starring Miss Arthur with Fred MacMurray and Melvin Douglas.

That’s a wrap for today’s Round-up!

Next week I’ll have my interview with Royston Innes, director of the soon-to-premier internet Western series DEAD MEN.  I’ll also have my review of the two published scripts for CHEYENNE WARRIOR II, and an upcoming RAMONA event held on the rancho where the story was conceived and written.