HALLMARK GREENLIGHTS ‘WHEN CALLS THE HEART’ - A NEW WESTERN SERIES!

The Hallmark TV movie WHEN CALLS THE HEART is in post production, and will serve as an introduction to a series of ten one-hour episodes of the same title.  Based on the best-selling CANADIAN WEST book series by Janette Oke, the movie stars Maggie Grace, Jean Smart, Lori Laughlin, Poppy Drayton and Stephen Amell.  The cast for the TV-series has not yet been announced. 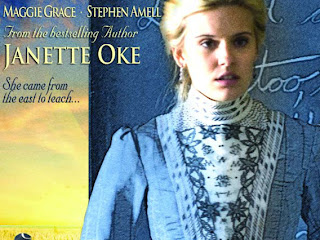 Set in 1910, it’s the story of Elizabeth Thatcher, a cultured teacher who, with misgivings, gives up her comfortable city life to become a teacher in a prairie town on the western frontier.  She’s determined to prove her independence to her doubting family, and her doubting self.  She’s helped in part by drawing inspiration from a late Aunt’s secret diary.  It seems the Aunt had a similar adventure, and similarly had a romance with a Royal Canadian Mountie. 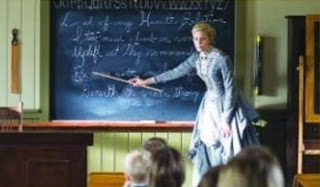 Author Janette Oke and the Hallmark Channel have had a long and successful partnership since 2003, when they first adapted her book LOVE COMES SOFTLY.  It’s led to a dozen titles from the series since then, most or all of them westerns, many with LOVE’S (ADJECTIVE) (NOUN) titles.  The WHEN CALLS THE HEART movie was written and directed by Michael Landon, Jr.

MUSICAL CHAIRS CONTINUE ON ‘JANE GOT A GUN’ 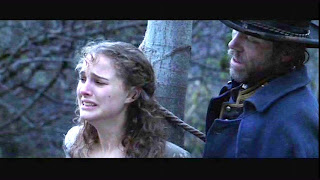 
But the good news is, when the music stops, it looks like they’ve still got a cast, plus a director.  It had been announced recently that Michael Fassbinder, of INGLOURIOUS BASTERDS, JONAH HEX, and Magneto of the X-MEN movies, was exiting due to schedule conflicts with another X-MEN movie.  He had been replaced by Australian Joel Edgerton, who plays the Squadron Team Leader in ZERO DARK THIRTY, and will soon be seen as Tom Buchanan in THE GREAT GATSBY. Edgerton had initially been cast as the villain of the piece, but when Fassbinder left, Edgerton was switched to hero, and Jude Law came on board to play the villain.  But no one, least of all star and producer Natalie Portman, was prepared when they reached the set on Monday, March 18th, for the commencement of principal photography, and learned that director Lynne Ramsay had quit.

The project had begun with an original screenplay by first-timer Brian Duffield, and was a highly touted ‘Black List’ script. (Note: this ‘Black List’ has nothing to do with politics. It is a list of highly respected scripts that haven’t been sold. Stupid name, considering the ‘Black List’ connotation, isn’t it?)  The story concerns Portman’s character, who is married to the head of an outlaw band.  When he comes home, badly wounded, pursued by former underlings who want to finish him off, she turns for help to a former lover, (once Fassbinder, now Edgerton).  Lynne Ramsay, who has garnered great respect as the director of WE’VE GOT TO TALK ABOUT KEVIN, had been actively involved with the project from day one, and her abrupt exit has left the town stunned.

Portman’s producing partner, Scott Steindorff of Scott Pictures, was livid, and told DEADLINE HOLLYWOOD: “I have millions of dollars invested, we’re ready to shoot, we have a great script, crew and cast.  I’m shocked and so disappointed someone would do this to 150 crew members who devoted so much time, energy, commitment and loyalty to a project, and then have the director not show up. It is insane somebody would do this to other people. I feel more for the crew and their families, but we are keeping the show going on, directors are flying in, and a replacement is imminent.”

Next to leave, it was revealed Wednesday, is Jude Law, whose interest in the project was based on his wish to work with Lynne Ramsay.  Among those being considered to replace him, according to the Los Angeles Times, are Tobey Maguire, Jeff Bridges, and Jake Gyllenhal.  Maguire starred in the rarely seen but excellent Ang Lee-directed western RIDE WITH THE DEVIL; Bridges has starred in a slew of westerns, most recently TRUE GRIT; Gyllenhal was nominated for an Oscar for Ang Lee’s BROKEBACK MOUNTAIN (if you consider sheep-movies to be westerns), and also played Billy Crystal’s son in CITY SLICKERS.

Now it’s been announced that WARRIOR director and co-writer Gavin O’Connor will be sitting in the canvas chair.  He directed Edgerton in WARRIOR, which garnered Nick Nolte a Best Supporting Actor Oscar nomination.  He also directed TUMBLEWEEDS (1999), which earned a Best Actress nomination for Janet McTeer, and directed the hugely popular hockey film MIRACLE (2004).  With so much money and so many jobs on the line, this highly talented group should be able to pull it off. 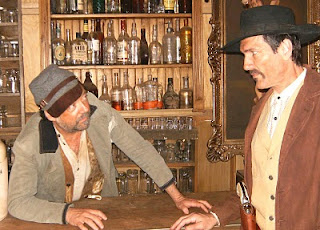 
When I learned that the folks at Hulu, the downloading site, were making their own western series, I was excited.  They were shooting eight episodes over four weeks at the Paramount Ranch.  But all the people involved were a little…gun shy... when I contacted them.  They weren’t having any press on the set.  Then I learned they were casting dress extras, and I thought I might sneak on-board that way.  But it turned out to be a S.A.G. shoot, so I couldn’t get on that way either.

Then I learned that actor, musician and all-around good-guy Mike Gaglio had a part in the show.  Mike has more than forty film and TV credits, including AMERICAN BANDITS: FRANK AND JESSE JAMES, and I thought I might learn a little about it from him.

“I was told I have a part in this movie.  I met up with some friends, and as soon as we got there, this guy goes, ‘So you’re our dead body extras, right?’  And half the cowboys are going, ‘Hell no, I’m not an extra; I’m an actor, and I was guaranteed lines in this movie.’  (Laughs)  They’re all pissed off.  And the kid who’s wrangling us goes, ‘We don’t have any use for that.  What we need is a bunch of dead bodies laying around, that the good guys have shot up.’  They put us across the stream from the big stars, the stream that runs right through Paramount Ranch.

“There’s six of us extras; he gave us each a number, and he said, ‘When I call out your number, you fall down dead.’  I was crouched down behind a tree.  They called out my number, I flipped over, dead.  And that was it.  And I laid there, and it rained on me for a little while, and I fell asleep for about an hour.  When I did wake up they had gone on to the dialog part.  But we still had to lie there.”


It turned out to be a comedy, and the actors were from Comedy Central.  “There was no script.  It’s all improv.  I was first told I had a week of work; but because I was killed off in the very first scene, they didn’t want me back.  Then I got a call that I had one more day on the show.  This time we were street people, just walking back and forth in front of the saloon.  They were really nice; they fed us extremely well. The costume lady was great.  She did some of the costuming for DEADWOOD.  The costumes were really ratty; they were rentals from Western Costume, but they looked very ‘DEADWOODY’.  A very accurate look to them.”   I guess I shouldn’t be too jealous about not getting to be a dress extra.


That'll be it for this week's Round-up.  I apologize for the several changes of type in this posting -- the software is giving me a hard time for unknown reasons.  Have a great week!