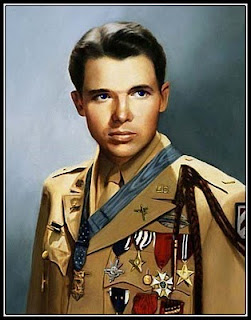 Audie Murphy
Back on the 4th of July, 2010, I wrote an article to give a special nod of gratitude to the Westerners, both in front of and behind the camera, who did their part to keep us free.  I’m doing an update for Veterans Day, but I know that there are many names left out, and I would be grateful if readers will contribute names for inclusion. 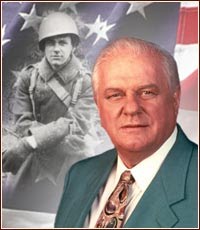 Tom Mix was an artillery sergeant in the Philippine campaign from 1898-1901. Ken Maynard fought with Gen. Pershing against Pancho Villa, and served in the First World War. Hoot Gibson was an Army Sergeant in the Tank Corps during World War One. With the outbreak of World War One, Tim McCoy organized a regiment of cavalry, and was commissioned Captain of Cavalry, later transferred to the Horse Artillery, was a Colonel by age thirty, and was appointed Adjutant General of Wyoming. He also served in the Second World War, and again achieved the rank of Colonel. Buck Jones enlisted in the Army in his teens, served first on the – border, then in the Moro uprising in the . Buck reenlisted in World War One, training horses for the Allies. During World War II, Buck took part in a cross-country series of Bond Rallies. He died with hundreds of others when a fire tore through ’s Cocoanut Grove nightclub. 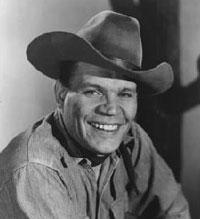 The two most highly decorated American soldiers of the Second World War both went on to acting careers: Audie Murphy and Charles Durning. Not far behind in honors was Neville Brand, who won the Silver Star, Purple Heart, and three Battle Stars among many other decorations. One of the Hollywood cowboys who did not return from the war was Lee Powell, U.S.M.C., the screen’s first Lone Ranger, who was killed in action on Tinian, .


Among the many western actors who served in the Navy during World War II were Richard Boone, Ernest Borgnine, Charlton Heston, Earl Holliman, Kirk Douglas, Strother Martin, Robert Montgomery, Jack Lemmon, Wayne Morris, Rock Hudson, Paul Newman, Strother Martin, Jeffrey Hunter, Robert Stack, Richard Jaekal, Lee Van Cleef, GUNSMOKE’s Dennis Weaver, and GUNSMOKE on radio’s Matt and Doc, William Conrad and Howard McNear. Harry Carey Jr. was a Navy Medical Corpsman in the Pacific. Henry Fonda won the Navy Bronze Star for Valor, Jason Robards Jr. was a radioman on duty in Pearl Harbor when attacked, and Glenn Ford served in , and , retiring as Captain in the Naval Reserve. Humphrey Bogart, who was injured in World War One, tried to enlist in World War Two, but was turned down because of his age.


Those who served in the Army included John Agar, Charles Bronson, George Kennedy, Eli Wallach, Robert Mitchum, James Coburn, and Gene Evans. Forrest Tucker was in the Cavalry, Dale Robertson was in a tank battalion in North Africa,   Burt Lancaster was in the Army Special Services, and James Arness was wounded at . Mel Brooks (we’re counting BLAZING SADDLES as a western), a combat engineer, cleared German mines after the of the Bulge. Gene Autry was an Army Flight Officer in the Air Transport Command.


Among those who served in the Coast Guard were Alan Hale Jr., Buddy Ebsen, Cesar Romero, Jim Davis and Victor Mature.


And because actors don’t make movies by themselves, Director John Ford commanded the photography group of the and was present when the troops landed on . Ford left the Navy as a Rear Admiral. Director Howard Hawks was a Lieutenant in the Signal Corps during the First World War before joining the Army Air Corps and serving in . Directors George Roy Hill and Sam Peckinpah were Marines. Directors William Wyler, Sam Fuller, John Sturges and Don Taylor served in the U.S. Army Air Corps, as did producers Jack Warner and Daryl F. Zanuck. Writer and director Burt Kennedy was in the Army Cavalry.  Producer Saul David served in the Army. And Yakima Canutt, stunt man extraordinaire, was in the Navy during World War I.


Western fans will soon have the unique opportunity of seeing a ‘new’ black & white 1969 Western for the first time.  Fred Olen Ray, the talented and prolific director of films like BAD BLOOD: HATFIELDS & MCCOYS and AMERICAN BANDITS – FRANK AND JESSE JAMES, will be releasing the film to DVD this December.  The movie stars Ross Hagen, the handsome, gravel-voiced character actor that played likeable tough guys on both sides of the law, in cop shows and westerns.  He passed away in 2011. 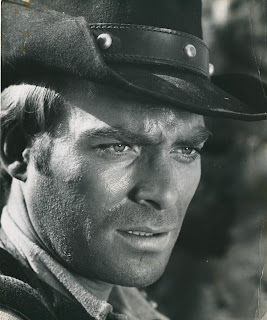 
Making his first credited appearance on THE BIG VALLEY, Ross was a busy actor from the mid-sixties, when he made multiple appearances on series like GUNSMOKE, THE VIRGINIAN and HERE COME THE BRIDES.  He continued throughout his life, also writing and directing films like MURDER ON THE YELLOW BRICK ROAD (2006), and his final credits included the Western SHADOWHEART (2009), and the voice of Landon Ricketts in the RED DEAD REDEMPTION video games.


starred in MARK OF THE GUN in 1969.  Shot at or around the famed Iverson Movie Ranch, it’s the only directing credit of actor Wally Campo, who is still active, and worked frequently for Roger Corman in the 1960s.  Here’s the kicker – it was shot by one of the greatest cinematographers of all time, Laszlo Kovacs, just before he shot EASY RIDER! 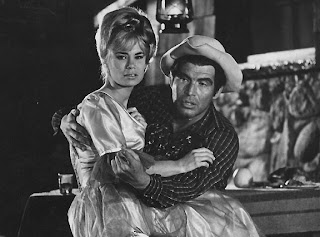 Fred Olen Ray and Ross Hagen worked together on more than twenty projects.  “I bought the copyright and negative (from Ross’ estate)”, Fred told me.  “I couldn’t let it disappear.  I don’t know if it ever had a release.  There’s no evidence I can find.”  Although there is some info at IMDB (http://www.imdb.com/title/tt0312950/), there are absolutely zero comments, suggesting no one has seen this movie.  When Fred releases it in December, there will be extras, but I don’t yet know what they are.   I’ll be back with more details soon.

, in , a core of the spaghetti western world, was just the location for the Almeria Western Film Festival.  But it also remains a very active shooting location, and this summer the BBC sent their DR. WHO crew to to shoot A TOWN CALLED MERCY.  In this episode, Matt Smith, as Dr. Who, becomes the reluctant sheriff of a Western town which is under siege by a cyborg.  It’s airing on BBC America on Monday, November 19th, check your local time.  For a preview, here is a two-minute montage from the episode, to the tune of GUNFIGHT AT THE O.K. CORRAL, posted by José Manuel Hita Segura. 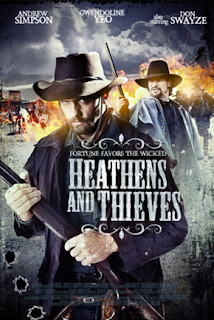 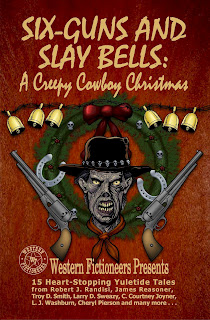 If you’re looking for the perfect Western book to both delight and creep out your loved ones, don’t overlook SIX-GUNS AND SLAY BELLS – you can read my review HERE.  http://www.henryswesternroundup.blogspot.com/2012/10/slay-bells-ring-for-holidays.html.  And if you’re in Southern California, and would like a signed copy one of the authors, Courtney Joyner will be signing at Dark Delicacies on Friday, November 16th, at 6 p.m. http://www.darkdel.com/ .
TCM FANATIC - WESTERN NOW ONLINE!

Veterans Day Weekend is a three-day weekend, so if you haven't had a chance to thank a vet for his or her service, you've got another chance tomorrow.  And if you already have, find another to thank.  There are plenty of men and women out there who have put their lives on the line to make us free!