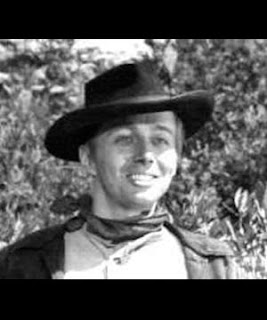 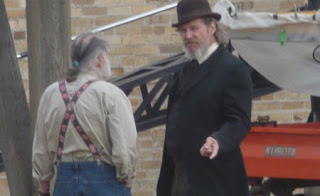 Writer/Director THADD TURNER informs me he's planning to roll camera Monday, June 14th, on PALOMINAS, with location work at the Eaves Movie Ranch and Bonanza Creek Movie Ranch, both in Santa Fe, New Mexico. The story takes place at the turn of the century, near the border with Mexico, where a rancher and sheriff must face down hired gunmen. I should have cast info in the next week or two. Turner has previously written and produced MIRACLE AT SAGE CREEK (2005) and SEVEN MUMMIES (2006).

WES STUDI MAKES IT COWBOYS AND INDIANS AND ALIENS

Travis Fimmel will be playing the Lee Majors-created role of Heath Barkley in the feature film version of THE BIG VALLEY, which starts shooting July 19th in Baton Rouge. The Ausie-born sctor played continuing roles in TARZAN (2003) and THE BEAST (2009). He joins Jessica Lange as Victoria Barkley, Jason Alan Smith as Nick, and Bruce Dern, Richard Dreyfus, and Lee Majors, who portrays the never-seen-in-the-series Tom Barkley, who sired all the Barkley kids, legit and otherwise.

Writer/Director Daniel Adams may be new to westerns, but not to period films. He's recently written and directed two films set and shot in Cape Cod. In 2009 he made LIGHTKEEPERS, currently in limited release, starring Richard Dreyfus as a lighthouse keeper who finds an amnesiac washed up on his shore. In the romantic comedy GOLDEN BOYS (2008), David Carradine, Rip Torn and Bruce Dern are turn-of-the-century retired sea captains, determined that one of them will marry Mariel Hemingway.

Photographer Joe O'Connell posted the picture above, of Jeff Bridges as Rooster Cogburn on the set of theTRUE GRIT remake. The production will be moving this week from small Central Texas towns to downtown Austin.

I’m not in the Academy, and I don’t know the criteria involved in Oscar nominations, but I do know that REEL INJUN is one of the best documentaries I’ve seen in years. Opening with a group of Indian children watching the climax of THEY DIED WITH THEIR BOOTS ON -- the death of Errol Flynn as Custer at Little Big Horn -- director Neil Diamond narrates: “Growing up on the reservation, the only show in town was movie night in the church basement. Raised on cowboys and Indians, we cheered the cowboys, never realizing that we were the Indians.”
A Cree living on a reservation near the Arctic Circle, Diamond decides to journey across the United States, to Hollywood, by way of numerous landmarks and reservations, to tell the story of the Indian portrayal in American film and culture, and the parallel story of the lives of real Indians.
By turns it’s enlightening, heartbreaking, and extremely funny – from the sly wit of Indian stand-up comic Charlie Hill; to the goofiness of some westerns, playing dialog backwards to simulate Indian speech; to the self-effacing humor of Diamond and others. His description of ‘the rez car’ alone is worth the price of admission. Editor Jeremiah Hayes seamlessly flows the documentary footage and western movie clips together.
We visit Pine Ridge Reservation, the poorest in the nation, and meet a Lakota chief who is a direct descendant of Red Cloud, standing at the spot where Crazy Horse was murdered.
We hear the fascinating, sometimes tragic stories of ‘movie Indians’ like Buffalo Child Long Lance and Iron Eyes Cody. And speaking of ‘movie Indians,’ we see the homogenization of all the distinct tribes into generic ‘Plains Indians.’ We learn why, among many Indians, LITTLE BIG MAN is better thought of than DANCES WITH WOLVES, why BILLY JACK was so important, and why Jesse Wente, an Ojibway film critic calls John Ford’s great STAGECOACH, “One of the most damaging movies for native people in history.”
The film also takes an amused look at the ‘Indian cool’ fashions of 1960s hippies, and the tribal elements of summer camp that brings a counselor all the way from Austria to lead his ‘Sioux’ band. Sacheen Littlefeather, who was a fashion model at the time, shares the story of Brando asking her to refuse his Oscar, and the importance of that gesture to Indian activists during the occupation of Alcatraz and Wounded Knee. I must confess that, prior to seeing the story of those occupations from the prospective of activists John Trudell and Russell Means, I simply thought they were crazy. Now I understand.
Among the familiar faces who add their perspectives are Clint Eastwood, Jim Jarmusch, Graham Greene and Wes Studi. Additionally we hear from actor Adam Beach, and directors Chris Eyre and Zacharias Kunuk, who are in the forefront of a renaissance of films made by Indians.
In addition to screenings in Canada, REEL INJUN will be shown in New York at The Museum of Modern Art from June 14th through June 20th. October 12th through the 17th it will be screened at The Indigenous Film Festival in Denver, Colorado. Beyond those screenings, I don’t know how available this film will be to see, prior to airing on PBS stations in the future, but I’ll keep you informed. In the meantime, CLICK HERE to see the trailer and visit the official website, which has more information.

The actor who made indellible impressions in films as varied as REBEL WITHOUT A CAUSE and SPEED, was born in Dodge City, Kansas, an appropraite locale for an actor who did so many western roles so well. His first feature film appearence was in JOHNNY GUITAR, and he followed that by playing the title character in the pilot episode for THE RIFLEMAN, 'The Sharpshooter,' seen in the picture above. He appeared in GIANT (1956), played Billy Clanton in GUNFIGHT AT THE O.K. CORRAL (1958), played Billy The Kid in an episode of SUGARFOOT, was seen in SONS OF KATIE ELDER (1965), HANG 'EM HIGH (1968), episodes of CHEYENNE, ZANE GREY THEATER, WAGON TRAIN, BONANZA and GUNSMOKE. In 1971 he wrote, directed and starred in THE LAST MOVIE, a film about making a western while surrounded by South American Indians. His last western was BLOOD RED, in 1989.

The actor whose whiny voice and piercing blue eyes made him a natural for portraying all manner of despicable villains, was born and bred in West Virginia. He made his film debut as the title character in MAD DOG COLL (1961), about the perpetrator of the Harlem Baby Massacre. It would be his only lead. He leant his villainy to three Sam Peckinpah westerns, RIDE THE HIGH COUNTRY(1962), MAJOR DUNDEE (1965) and PAT GARRETT AND BILLY THE KID (1973). In addition to episodes of THE RIFLEMAN, THE VIRGINIAN, HIGH CHAPARRAL, GUNSMOKE and THE TRAVELS OF JAMIE MCPHEETERS, he appeared in RETURN OF THE GUNFIGHTER (1967), BAQUERO (1970), SHOOTOUT (1971), and for Clint Eastwood in OUTLAW JOSEY WALES (1976). He did many non-western roles as well.

Hollywood's New Beverly Cinema will be showing DUCK, YOU SUCKER! and BRING ME THE HEAD OF ALFREDO GARCIA from Sunday, May 30th through Tuesday, June 1st.

To read my review of The Good, The Bad and The Weird, check out May 9th's entry. It's currently playing at the Mayan Theatre in Denver, and opens at the Main Arts Theatre in Detroit on June 4th.

That's about it, folks. I haven't even looked at what's on cable TV yet. I'll try to later on in the week, but I make no guarantees. Don't forget that it's not just a three-day weekend, it's Memorial Day: FLY YOUR FLAG!