MUSICAL CHAIRS AT THE BARKLEY RANCH! 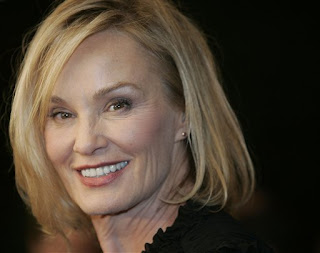 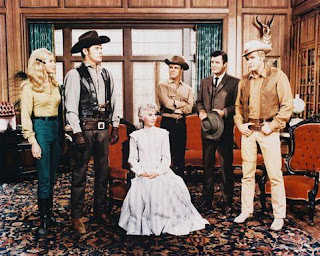 As the theatrical version of TV's THE BIG VALLEY gets set to roll camera on July 19 in Baton Rouge, they keep switching the chairs (see photo of Barkleys waiting anxiously for music to begin again). This time, Susan Sarandon is out as Victoria Barkley, and Jessica Lange is in. The EMMY winning actress, for GRAY GARDENS, will be taking on the role made famous by Barbara Stanwyck in the long-running series. Listed in the cast are Bruce Dern and Richard Dreyfus, who both guested on the original series, Jason Alan Smith in Peter Breck's role as fiery Nick Barkley, and Lee Majors, not as Heath, but as his illegitimate father, Tom Barkley.

Conspicuously absent from current listings is Ryan Phillipe, who had been announced as Jarrod, the Richard Long role. Billy Bob Thornton had also been rumored for an unannounced role, but his name has stopped popping up.

Or maybe the cowboys. Keith, of the great Carradine acting dynasty, has had many western roles, frequently portraying real people: he was Jim Younger in LONG RIDERS (1980), Buffalo Bill Cody in WILD BILL (1995), starred on Broadway as WILL ROGERS, and was Wild Bill Hickock in the first five episodes of DEADWOOD. (And for the record, the biggest mistake the producers of DEADWOOD ever made was to kill off their most interesting character so soon!) Now he joins Danile Craig, Sam Rockwell, Olivia Wilde, Harrison Ford and Heavy D in COWBOYS AND ALIENS, for Director Jon Favreau. Incidentally, Favreau will be working with his same cimenatographer and editor from IRON MAN 2, Matthew Libatique and Dan Lebental, respectively.

BEST THING ON TV ALL WEEK! JOHNW WAYNE AND INDIANS FACE OFF!

Turner Classic Television continues with their NATIVE AMERICAN IMAGES ON FILM series on Tuesday and Thursday, and Wednesday, smack in the middle, is John Wayne's Birthday! TMC will be showing a whole passel of Duke B-westerns, capped by STAGECOACH. Next I'll be reviewing a fascinating documentary, REEL INJUNS, examining Hollywood's portrayal of Indians from an Indin's point of view, and a look at several Indian-made films, including SMOKE SIGNALS (1998), which plays on TMC on Tuesday. Here's the whole line-up:

8:30 p.m. SMOKE SIGNALS (1998) When his best freind's father dies, an Indian funds their trip to deal with his remains. Starrin Adam Beach.

6:15 p.m. THE EXILES (1961)Three young Indians feel isolated when they leave the reservation for the big city.

8:00 p.m. INCIDENT AT OGLALA (1992) A trial follows a deadly shootout between federal agents and Native Americans, directed by Michael Apted.