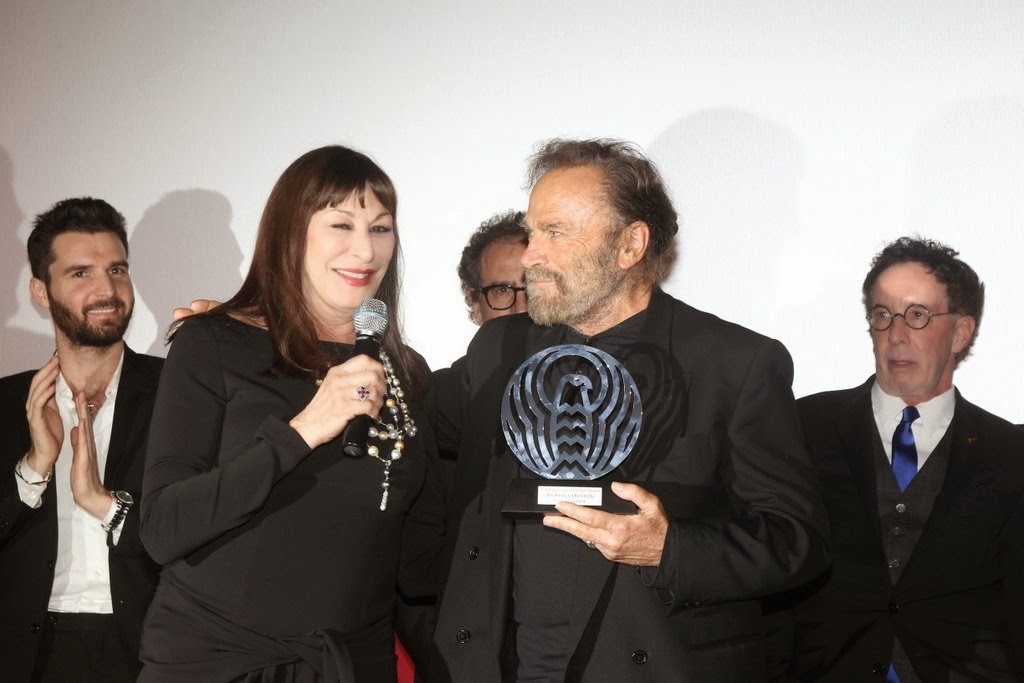 The 9th annual Los Angeles, Italia Fest opened on Sunday, February 23rd, and closed Saturday night, March 1st.  Held, as always, at the Chinese 6 Theatres at the Hollywood and Highland Center, in the heart of Hollywood, the yearly celebration of film, fashion and art attracts fans and stars, especially those with an Italian background, or an interest in Italian cinema.

With the Oscars being awarded last night, it’s worth noting that among attendees were Best Director nominees David O. Russell and Martin Scorcese; Best Adapted Screenplay nominee Steve Coogan for PHILOMENA; Best Score nominee Alexandre Desplat for PHILOMENA; and Bono, who sings the Best Song-nominated Ordinary Love in MANDELA: LONG WALK TO FREEDOM.  Al Pacino and Keith Carradine were there as well. 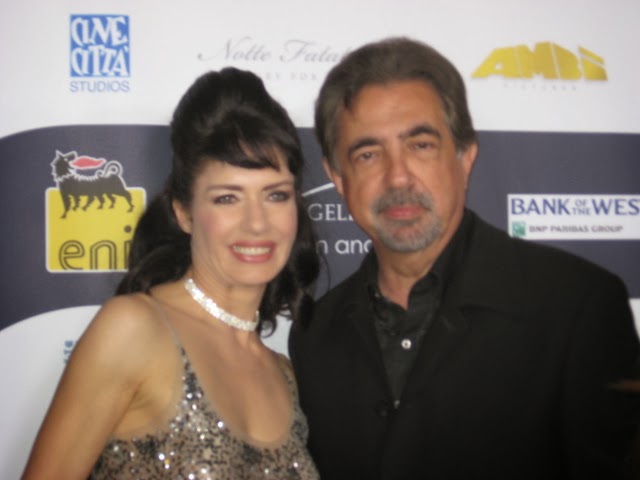 Joe Mantegna with an Italian beauty

On Sunday night’s Red Carpet, I badgered unsuspecting celebrities about western movies, especially their own.  Joe Mantegna is the Chairman of Los Angeles Italia, and hasn’t done a western since THE THREE AMIGOS.  I asked him when he was going to do another.  “When they ask me.”  I asked him what his favorite westerns are.  “THE WILD BUNCH.  And THE MAGNIFICENT SEVEN.” 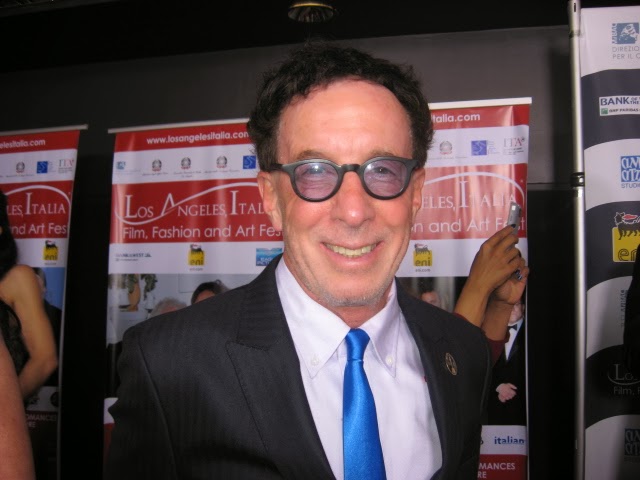 I asked producer Mark Canton when he was going to do a western.  “When I’m done with the easterns .  I’m shooting my new TV series, called POWER, for STARZ in New York now.  But in a way, the new ‘300’ has the spirit of westerns, and that’ll be out March 7, so we’re very excited.  I don’t shy away from anything, but it has to be the right script and the right material. ” 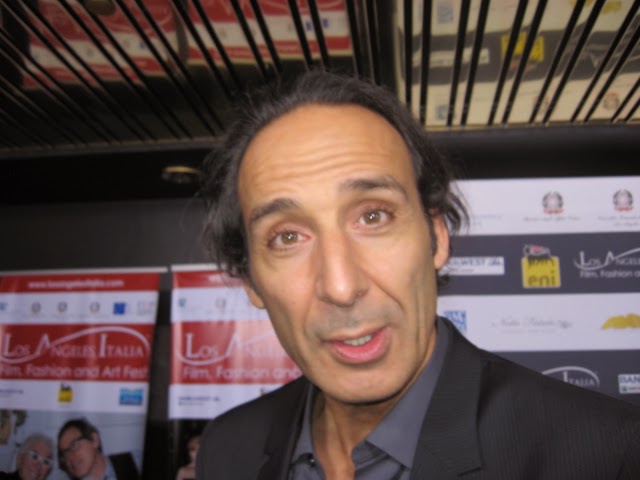 I asked composer Alexandre Desplat whose music he listens to for pleasure. “Quincy Jones.  Debussy.  Many things.”  I asked him if he had any favorites among composers of Western scores.  “For Western movies?  Yes.  Bruce Boughton’s score for SILVERADO I think is fantastic.  I think Elmer Bernstein’s MAGNIFICENT SEVEN.  John William’s MISSOURI BREAKS.” 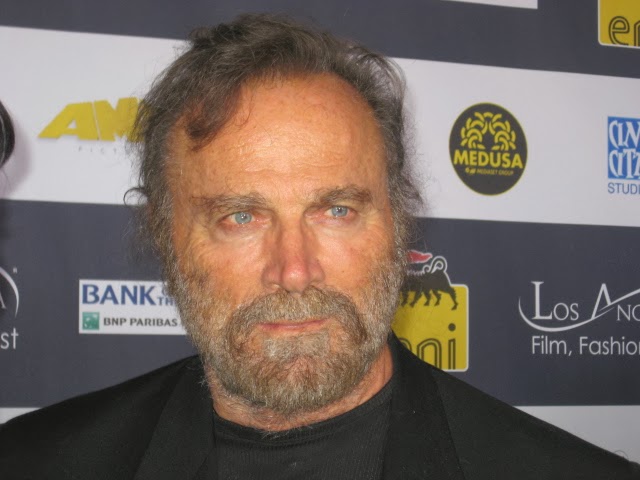 I was particularly excited to see Franco Nero, and to quiz him about the soon-to-be-filmed DJANGO LIVES!, where he’ll portray his original character living in early 20th century L.A., working as a technical advisor on silent westerns, and getting into trouble.  He gave me his charming, enigmatic smile, but wouldn’t talk about the movie.  I think, like so many of us, he’s superstitious about discussing things that haven’t happened yet, though he has signed a letter of intent to the project.   Also starring in the film will be Nero’s co-star from the wonderful Sergio Corbucci western LOS COMPANEROS, Tomas Milian!

Also attending the Fest was actress Angelica Huston, seen at the top with Nero.  Her father, the great John Huston, discovered Nero, and cast him as Abel in THE BIBLE.  The original DJANGO came shortly after. 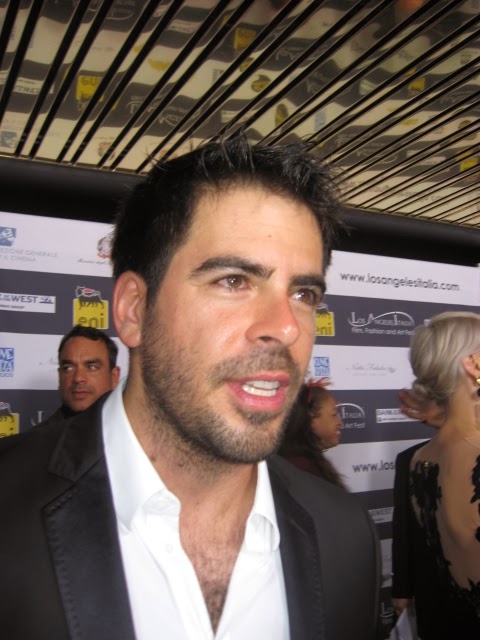 HOSTEL and HOSTEL 2 writer-director Eli Roth had plenty to say about Italian horror (no surprise) and westerns, even before he reached me in line.

ELI ROTH:  I’m happy to come out and support Italian cinema.  I grew up on Italian movies.  I think (Jesse Franco’s) DEMONS was the first one I saw; Italian horror was the most important form of horror.  First I went for American horror, which I became obsessed with. Then I saw Italian horror, which blew my mind.  I was very much influenced by Italian horror from the ‘70s through the ‘80s.  And I’m here to support David O. Russell, who’s a friend.  We’re writing a movie together.  It’s called THE HIVE, and nobody’s read it except me and David.  We’re working on it now.

LADY NEXT TO ME:  What Italian films have influenced you the most?

ELI ROTH:  CANNIBAL HOLOCAUST by Ruggero Deodato; huge influence.  ZOMBIE 2 by Lucio Fulci – where a zombie fights a shark, one of the greatest movies ever.  And SUSPIRIA, by Dario Argento.  That movie blew my mind.  There were no rules – it was like being in some beautiful, fantastic dream.  And so it taught me that not everything had to add up; you can make abstract horror movies.   Doesn’t have to be so rigid and so linear, so plot driven.  It can be operatic and stylish.  Huge influences, all three of those.

ELI ROTH: The Italian horror films, they came from the spaghetti westerns.  And in the American westerns they never had on-screen violence.  The old fifties movies, somebody’d get shot, and they’d fall down.  You couldn’t show blood in the movies.  You couldn’t show blood onscreen in America.  The Italians didn’t know those rules existed, so they started doing all these on-screen blood shots.  Which then, with Sam Peckinpah, Scorcese, it kind of filtered its way into late ‘60s, early ‘70s American cinema.  But then the Giallo films, the Italian crime films, became the ‘80s slasher films.  They’ve kind of mirrored each other, but the Italians have always pushed it further.  There was this incredible golden age, when Italy was making so many movies in the 1970s and ‘80s, and of course that’s changed now.  Economically, in Italy, they don’t have the same output.  But I just love films of that period.  I think they have an energy and a violence about them, that just anything can happen.

HENRY:  When are you going to make a western?

HENRY:  Do you have favorite westerns?

ELI ROTH:  Yeah.  FOUR OF THE APOCALYPSE by Lucio Fulci, one of my favorites; a really incredible film.  And SHANE, and THE SEARCHERS. 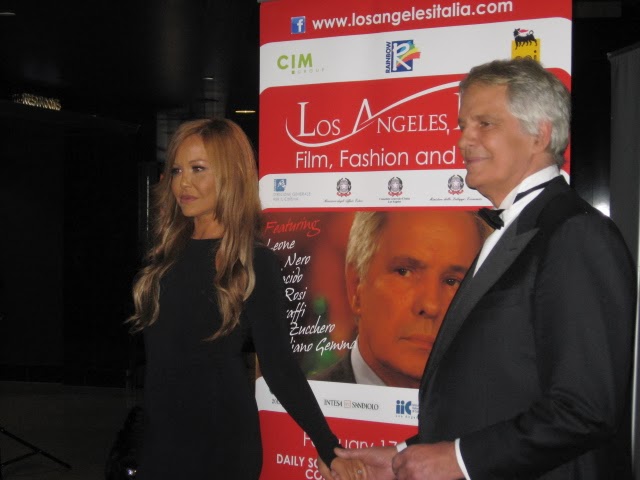 The previous two Fests that I attended gave considerable time to the spaghetti western, but there was very little this time.  Sadly, the one Eurowestern-related screening was in tribute to Giuliano Gemma, who died in October, following a car accident outside of Rome.  Starting out in films as a stuntman, he became ‘Montgomery Wood’ and starred in several spaghetti westerns as Ringo, and later played Arizona Colt.  After a long career in major European movies, his final role was as the hotel manager in Woody Allen’s TO ROME WITH LOVE.

His daughters, Vera and Giuliana Gemma, directed a documentary about their father, AN ITALIAN IN THE WORLD, which was screened on Sunday afternoon.  Last year, Giuliano attended the Fest, when the documentary was first shown, and I had a chance to speak with him.  I asked him which of his Westerns are his favorites.  “You know, I made about seventeen Westerns, but I don’t know the titles in English.  A PISTOL FOR RINGO, THE RETURN OF RINGO.” 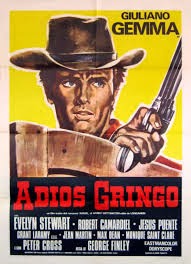 “She made a good work; it just brings about twenty years of my filmography.   We have to do a second part.”

“And when are you going to do another western?”

“Ahh…the Western, it is finished.  We don’t have the opportunity.  But maybe Tarantino will call me – why not?!”

On Monday night, Mike Malloy’s documentary, EUROCRIME: THE ITALIAN COP & GANGSTER FILMS THAT RULED THE ‘70S, was greeted with thunderous applause by an enthusiastic crowd.  Mike is one of the producers behind the amazing no-buget western THE SCARLET WORM if you missed my review, here is the link: http://henryswesternroundup.blogspot.com/2013/04/cowboy-festival-brings-deadwood-prom.html 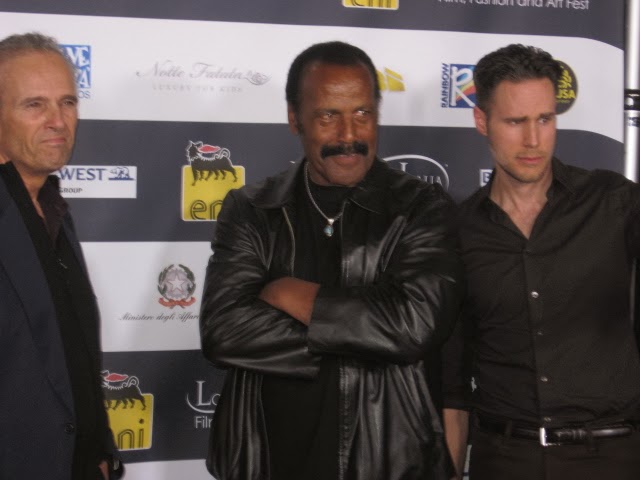 The wonderfully entertaining and informative film traces the largely overlooked (in America) history of the European films that started out imitating DIRTY HARRY and THE GODFATHER, and created a genre of their own.  Among the interview subjects were spaghetti western stars Franco Nero, Henry Silva and Richard Harrison, and blaxsploitation western star Fred Williamson.  Joining Malloy, producer of the upcoming Franco Nero starrer DJANGO LIVES! were Franco Nero, Fred Williamson and Leonard Mann.

That was it for western fans at the Fest.  Hopefully next year’s event will have more for us!

Well, I’ve got a few other items I was working on, but they’ll have to wait until next week.