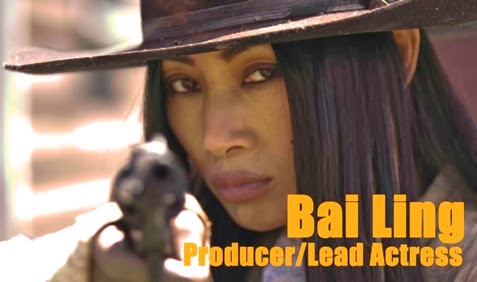 Born in Chengdu, China, the lovely and often outrageous Bai Ling began her acting career at age fourteen, as both a soldier and performer in the People’s Liberation Army, entertaining the troops in Tibet.  She made a number of films in China before coming to the United States, and in 1994 made a splash opposite Brandon Lee in THE CROW.  Since then, Bai Ling has been a busy actress, appearing in films of all genres that called for her exotic brand of beauty, and in 1999 she made her first Western movie appearance, as Miss East in 1999’s THE WILD WILD WEST.  Fifteen years later she’s returned to the genre, this time not just as stunning eye-candy, in YELLOW HILL – THE STRANGER’S TALE. 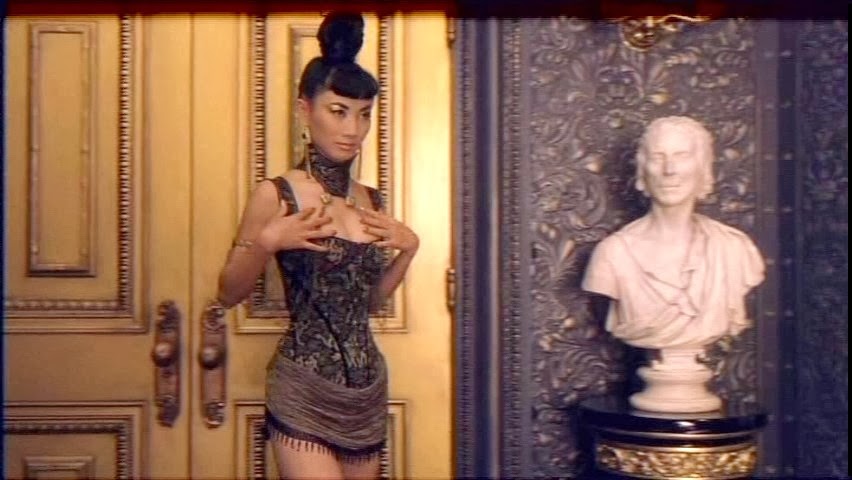 This time she’s a producer as well as the star.  She’s collaborated with Ross Bigley, who wrote, directed and edited the short film, which has been successfully making the rounds of festivals in South Dakota and Wisconsin – it won for Best Short Narrative at the South Dakota Film Festival, and received the Founders Choice Award at the Wildwood Film Festival. 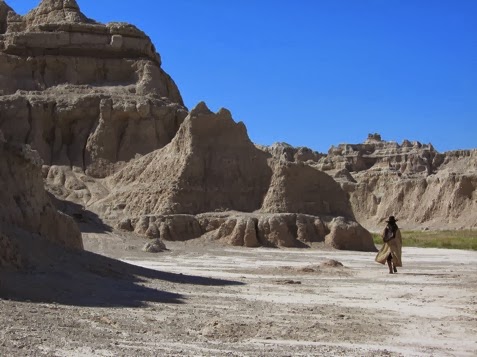 Ross Bigley tells me the idea for YELLOW HILL came to him a decade ago.  “I have a love for the western genre, and years ago I came across a book detailing the gold rush. I read about the brutality and racism towards the Chinese immigrants coming to America for their own dreams of striking it rich, and about the ways the Chinese settlers came up with to hide their gold from those desperadoes. And it struck me as a fantastic story never told on the screen before.  I needed a hero for this, and I thought about YOJIMBO and A FISTFUL OF DOLLARS, the anti- hero type. That seemed perfect because if there were to be someone to help them, there should also be a level of mistrust.”

Ross pitched the idea to Bai Ling when he was directing her in the crime thriller PETTY CASH, and soon the two of them and Glenn Popple formed a production company to make the film.  But before the feature, they decided to do a stand-alone short, a section from the full story, that could be used as a selling tool.  It’s a small film – half of the $10,000 budget was raised by crowd-funding through Indie-Go-Go.  But they used their dollars wisely – it’s peopled with professional actors, and shot in South Dakota, in the Badlands, and in South Dakota’s Original 1880s Town.  The costumes, props and weapons look and feel right, although there’s a noticeable shortage of horseflesh. 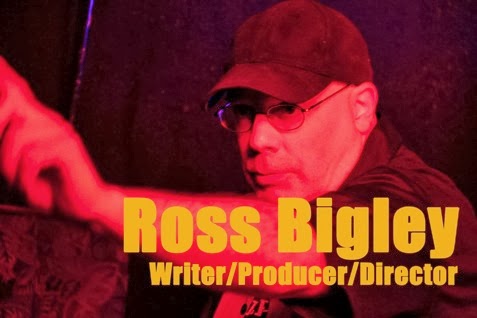 The short’s story concerns Bai Ling’s Stranger character (the Leone influence is strongly felt throughout) coming out of the desert, into a town, in search of her father – she hasn’t seen him since he sold her to a brothel as a young girl.  The flashbacks are unflinching and upsetting, and when the townspeople are of less than no help, the action is fast and bloody – in short, it’s brief, but a lot of fun, and Bai Ling’s character happily doesn’t veer too close Eastwood’s emotionless Stranger.  While she’s chillingly determined, she lets her feelings flow unrestrained.

While the short film is only available to be seen by the public in festivals, but it may be more widely available soon.  More to the point, hopefully the attention the short is getting will lead to the funding of the feature.  I’ll have word on their progress from Bai Ling and Ross Bigley soon.  In the meantime, click YELLOW HILL
to go to the official Facebook page, and below is a clip of Bai Ling discussing the movie.

‘NEW WEST’ CONCERT A HIT – MORE GIVEAWAYS ON THE WAY! 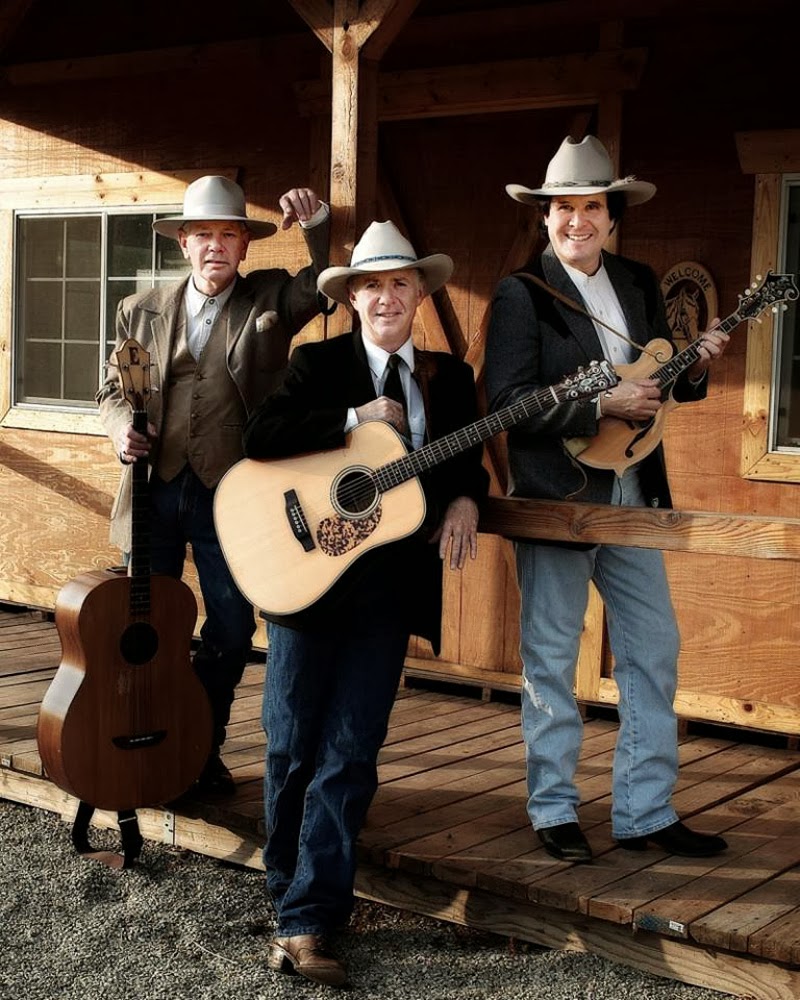 I just heard from Danny Ramblin’ Jack O’Connell, our winner of two tickets to last Thursday’s NEW WEST concert in Santa Clarita, courtesy of those fine folks and Round-up sponsors, OutWest.  He brought along custom knife-maker to the stars (he made the knife for Tarantino’s DJANGO UNCHAINED) Chuck Stapel.  Dan says, “I thoroughly enjoyed New West. They were spot-on and the audience extremely receptive. I discovered that their humor now rivals such mega Western acts ala Riders in the Sky!”

And more good news, I hear from Bobbi Jean Bell, who with her husband Jim are the purveyors of OutWest that they want to do another ticket giveaway for the March 20 concert by The Stardust Cowboys!  I’ll have details in next week’s Round-up! 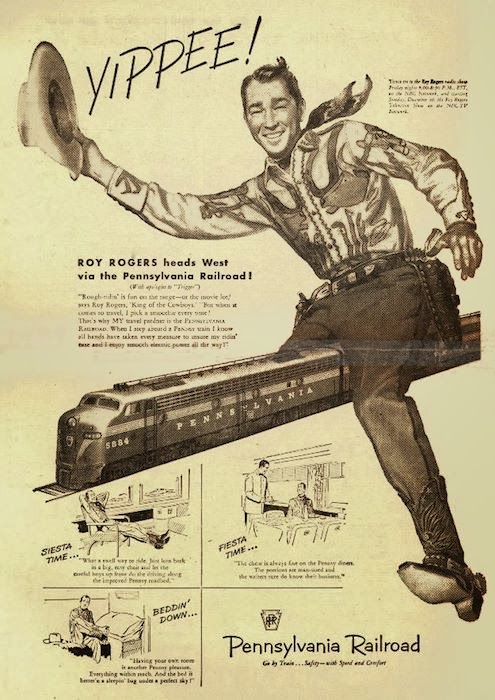 I had to share this uh…really unusual ad for The Pennsylvania Railroad, featuring the King of the Cowboys.  It’s from the folks at COLLECTORS WEEKLY, from their article, ’28 Cringe-Worthy Vintage Product Endorsements’, which you can see HERE.

It’s a short Round-up tonight, because there’s been so much going on.  Yesterday I interviewed screenwriter-turned-western-novel author C. Courtney Joyner about his first Western novel, SHOTGUN, and tonight I’m off to cover the Red Carpet for the opening night of the Los Angeles Italia Film Fest.  I’ve also got three new westerns to watch and review, so keep your eyes peeled – more is comin’ down the pike!