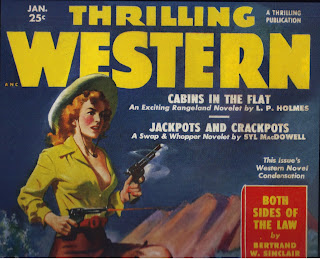 TARANTINO ANNOUNCES NEXT FILM ‘ANOTHER WESTERN!’ 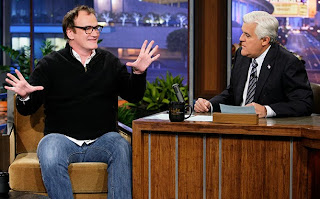 Last night, writer-director Quentin Tarantino guested on the TONIGHT SHOW to reminisce with Jay, who, twenty years ago, had him as a guest on the show, when RESERVOIR DOGS was completed but no yet released, because he loved the idea of a kid who works at a video store directing a movie.  It was his first talk-show appearance – an auspicious start!

When Jay asked him what his next movie would be, he said, “A western.  It’s not a sequel to DJANGO, but it’s a western.  I had so much fun doing DJANGO, and I love westerns so much. After I taught myself how to make one, it’s like ‘Woo, okay, now let me make another one. Now I know what I’m doing!”  He was also on the show to announce the publication of the graphic novel version of DJANGO.


According to Deadline Hollywood, FX will produce a six-hour miniseries about the infamous Dalton gang, best remembered for their disastrous 1892 attempt to hold up two Coffeyville, Kansas banks simultaneously.  Emmett was the only brother to survive, and lived until 1937 in Los Angeles.  His family history, WHEN THE DALTONS RODE is highly entertaining, if understandably self-serving.  He also wrote a novel, BEYOND THE LAW, starred in the film version in 1918, and starred in MAN OF THE DESERT, which you can see below (although you ought to put on some music – 25 minutes of silent movie without music is hard to take).

The miniseries will be based on the 1979 novel DESPERADOES, written by Ron Hansen, and tells the story of the Dalton Gang from the point of view of Emmett, at age 65.  Robert Knott adapted the novel; he has teamed with Ed Harris on several projects, and is currently working with him on TULSA, a cable TV project about the oil business, will exec produce, with Josh Maurer and Alixandre Witlin. 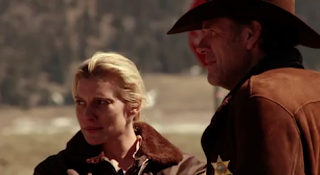 LONGMIRE season three has been green-lit for ten episodes!  While the pick-up by A&E and Warner Horizon was leaked in August, the final deal was not made until now.  No surprise it’s coming back – in addition to being the highest-rated original series A&E has produced, it’s also extremely compelling, well-written and directed.  While each episode features a single crime being investigated, they tend to be about real ‘res’-related issues that are rarely covered in traditional cop shows.  The backstory of Sheriff Longmire (Robert Taylor), as relates to his friendship with bartender Lou Diamond Phillips, the death of his wife, and relationships Katee Sackhoff as one of his deputies, Cassidy Freeman as his daughter, and Bailey Chase as the deputy who wants his job, become more compelling with each episode.

I’ve had a huge and enthusiastic reaction to last week’s lead story, about the making of COMANCHE STALLION, John Ford’s last intended project (if you missed that story, go HERE l )
Producer Clyde Lucas tells me, “Vic and I just returned from scouting locations in Monument Valley. We had a wonderful Navajo guide, Larry Holiday. Every time we asked about a location in the script, he took us to the perfect spot.”  Incidentally, in addition to being a movie producer, Lucas is also a talented musician.  At the 2011 John Wayne Tribute at the Cinerama Dome in Hollywood, Lucas played guitar accompaniment to harmonica virtuoso Tommy Morgan, whose music has been heard in HOW THE WEST WAS WON, THE WAR WAGON, RIO BRAVO and many others.   Here’s a peek at their location search: 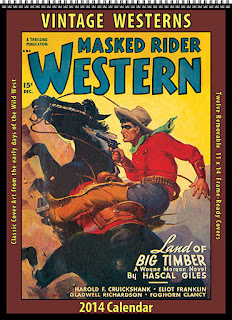 When I glanced at my local bookstore calendar rack, and saw a masked cowboy firing his Colt from the saddle of a bucking black horse, I was thrilled – I don’t ever recall seeing a calendar designed just for us Westerners.  Turned out the image was the cover of the December 1947 pulp, MASKED RIDER WESTERN, and all of the pictures are western pulp covers, mostly from the 1940s.  From TEXAS RANGERS, THRILLING WESTERN, WESTERN TRAILS, RANCH ROMANCES, the paintings are florid and beautiful in color and over-heated in action, in the grand pulp style, and will look great on your wall.  Better still, the pictures are big – 11 x 15, and as it says on the back, “…a collection of 12 archival-quality prints, disguised as a calendar.” 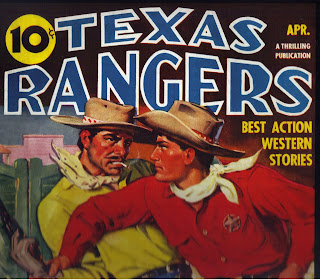 Another nice touch, there’s a quote from the lead pulp story on the bottom of each monthly page, and among the days are small black & white illustrations from inside the magazines.   When I contacted the good folks at Asgard Press, they made me on offer I couldn’t refuse: they’re giving a 10% discount on any calendar Round-up readers care to order!  You really should check out their site, as in addition to the Western-themed calendar, they have sci-fi, comic book, sheet music, and many college football-themed calendars.  Here’s the link:  http://www.asgardpress.com/?promocode=HWR13
And here’s the promo code: HWR13 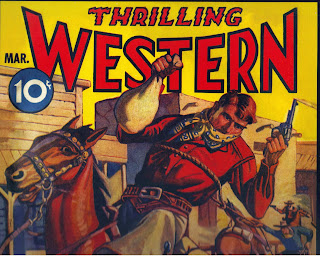 ‘WHEN CALLS THE HEART’ SERIES HAS START DATE

The Hallmark Channel announced Sunday, January 12th as the premiere date for their hourly series, WHEN CALLS THE HEART, based on the Janette Oke book series of the same title.  A two-hour movie, introducing some of the characters, and with the same title, premiered on October  19th (read my review HERE)

Thanks for your patience with this week’s Round-up!  When I posted here and on Facebook that I was too sick to do the Round-up on Sunday, I was deeply touched by how many of you took the time to send me ‘get well soon’ wishes.  And my wife, who is not a blogger or a Facebook person, was truly impressed (always good when you can surprise you wife somehow after 28 years)!

I’m not 100% done with this upper respiratory infection, but my odds of getting to eat Thanksgiving dinner are looking better.  My odds of getting a drumstick, I cannot say.  HAPPY THANKSGIVING TO YOU ALL!