"HOT BATH AN' A STIFF DRINK" ON THE WAY! 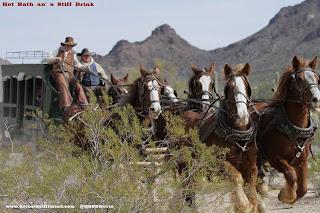 I was surprised and flattered to be the only press invited to a ‘friends and family’ screening of the new Western, HOT BATH AN’A STIFF DRINK.  It was understood that I was not to review the movie, as it was still being edited, and shown without color correction, without a sound mix, with a temporary music track.  I was frankly expecting something a whole lot less polished than what I got, but I’m getting ahead of myself. 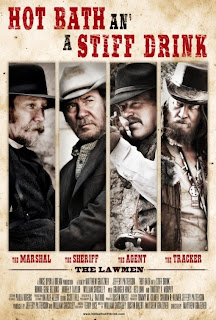 The screening was held on Thursday night in the Chaplin Theatre at Raleigh Studios, which is just about across the street from the Paramount Pictures lot.  In fact, although the name Raleigh has only adorned the studio since 1980, the lot not only predates Paramount, it is in fact something of an ancestor.  Raleigh was built as the Famous Players Studio by Jesse Lasky in the teens; the company would eventually become Paramount.  It passed through the hands of many owners, including Mary Pickford, over the years, and as a rental lot, many interiors for poverty row Westerns, as well as the SUPERMAN and PERRY MASON series were shot there. 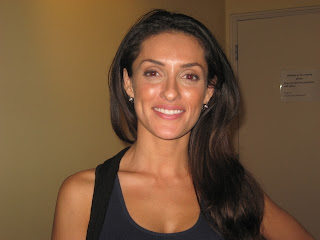 
Taking our seats, we were welcomed by co-writer and director Matthew Gratzner, who is a tyro feature director, but one of the film industry’s most respected special effects artists, who was nominated for a BAFTA AWARD for his work on THE AVIATOR, and an EMMY for FROM THE EARTH TO THE MOON. 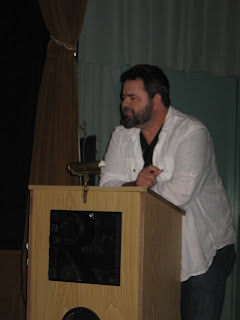 The lights dimmed, we watched a pair of brief teasers, then the movie began.  Even without color correction, the film is beautifully shot by A.J. Raintano, in and around Old Tucson Studios in Arizona (a lot built in 1939 for Columbia Pictures’ ARIZONA, starring William Holden and Jean Arthur, which has grown like a weed ever since, serving as a location for RIO BRAVO, THE HIGH CHAPPARAL and TOMBSTONE among hundreds of others).  The story begins with a farming family attacked and slaughtered by a band of marauders.  One of the outlaws grabs a surviving young boy and rides off with him, not knowing that the boy’s brother – and twin – is alive and in hiding.  The story jumps ahead thirty years: the brothers, both portrayed by Jeffrey Patterson, have grown to manhood on opposite sides of the law.  They both want justice for their slain parents, so it is inevitable that they’ll meet.  Cast members on the wrong side of the law include Ronnie Gene Blevins, of the recent SHADOW ON THE MESA and DARK CANYON, as a demolition specialist; and the beautiful Mirelly Taylor, of LOST, as a sharpshooter you don’t want to cross. 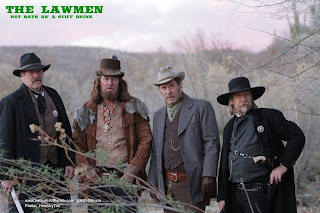 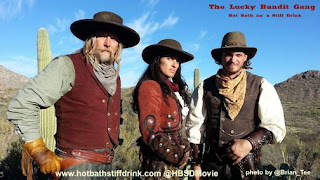 The BAD -- but definitely not the Ugly!


Those on the badge-wearing side include a sheriff played by Grainger Hines, who was Doc Whitehead in HELL ON WHEELS and Gideon Welles in LINCOLN; a Secret Service Agent played by Rex Linn, of APPALOOSA, DJANGO UNCHAINED, and the upcoming western comedy A MILLION WAYS TO DIE IN THE WEST; and as a tracker with a personal stake, William Shockley, well-remembered as the saloon-keeper who never sees eye-to-eye with DR. QUINN, MEDICINE WOMAN.  Timothy V. Murphy, of APPALOOSA and THE LONE RANGER plays a politician, so you can place him on whatever side you think he belongs. 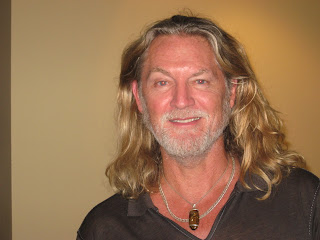 
Shockley, in addition to acting, is one of four credited writers, along with director Gratzner, and Terry Luce and Dustin Rickert.  The script is crisp, the visuals are stunning, and there is some terrific action.  There's also some nice pieces of rolling stock, and a remarkable array of facial hair, which is competely accurate to the time, and rarely seen.  For me it harkens back to the great Burt Kennedy westerns of the 1960s and 1970s.  I can’t wait until it’s locked, so I can see it again, and give you a full review.  It’s definitely one to look forward to!  You can follow HOT BATH on the official Facebook page, HERE. 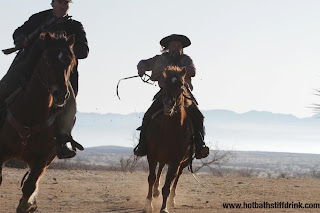 
WESTERNS ALL OVER THE DIAL

AMC usually devotes much of Saturday to westerns, often with multi-hour blocks of THE RIFLEMAN, and just this week began running RAWHIDE as well.  Coming soon, LONESOME DOVE and RETURN TO LONESOME DOVE miniseries!

I was planning on a longer Round-up -- I'm up to my ears in interviews to transcribe, and books to read and review.  But I'm trying to finish a new screenplay, and rehearsing for a new production of THE APPLE TREE, and I've got a bunch of long speeches to learn, so bear with me!

Next week we'll be looking at the festivities planned for the NATIONAL DAY OF THE COWBOY, on July 27th!