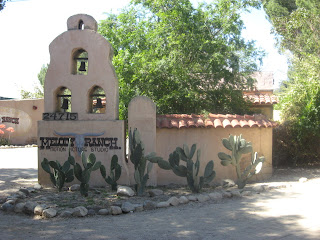 Yesterday and today, Saturday April 21st and Sunday April 22nd, thousand of devotees of cowboy poetry and western music, literature, movies and television poured into Melody Ranch for the 19th Annual Cowboy Festival.  What started as a Cowboy Poetry event at Santa Clarita High School got ‘Earthquaked out’ in 1994.  The Veluzat family, who own and have operated Melody Ranch since they bought it from Gene Autry in 1990, invited the displaced poets to hold their event at the ranch, and they’ve been doing it there ever since.  The event gets bigger and more enjoyable, every year.


The ranch opened to filming in 1915, was later bought by Monogram Studios, and sold to Gene Autry in 1952.  Over 750 ‘B’ westerns were shot there, as well as many ‘A’s, and countless TV episodes – over 2000 productions in all.  The main western street served as in GUNSMOKE, and the main street of DEADWOOD, and just finished up as the primary location of Quentin Tarantino’s DJANGO UNCHAINED. 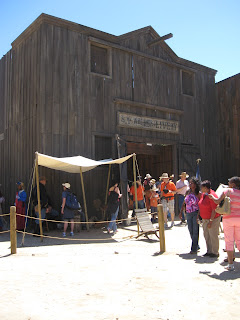 As Melody Ranch is only opened to the public this one week-end a year, it is an event not to be missed, and I was particularly eager to see what changes Tarantino, who reportedly had the ranch sewn up for six months, had wrought.  Happily, the changes made were so in keeping with the place that they were all but unnoticeable.  The biggest addition, right at the beginning of the street, is a livery stable.  The other addition – and I’d never have noticed it if a man who’d helped build it hadn’t pointed it out to me – is to the Adams Hotel.  A balcony has been added to the second story.  Overall, everything looked just a bit sturdier – not ‘newer’, because they’re expert at hiding any inappropriate newness, but somehow more substantial. 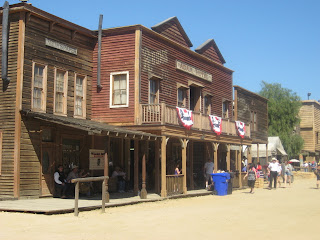 That livery was occupied by a group of Buffalo Soldiers, including Justin Collins, who is pictured showing an officer’s saddle.  He also told a joke about the difference in design between the enlisted man’s and the officer’s saddle, and if there was any way to clean it up, I’d repeat it. 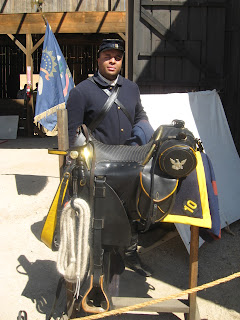 The street was full of entertainers, from lariat-spinners to fiddlers.  The shops sold a wide variety of art, hats, and anything you could make out of leather. 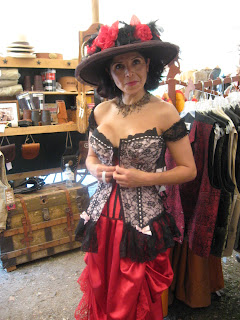 star William Smith, set up in a saloon, did land-office business selling his book of poetry, sharing the space with VENTURES guitarist Nokie Edwards. 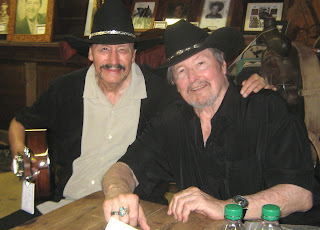 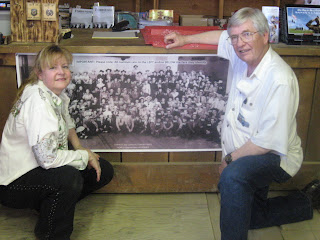 Across the street was the Buckaroo Bookshop, run by Jim and Bobbi Jean Bell, whose OutWest store in Newhall is a hub for western literature and music.  They’ve taken on a massive project: identifying all of the cowboys in a photo taken at the Madison Square Garden Rodeo in 1944!  Among authors out on the patio was Peter Sherayko.  His : THE GUNS AND GEAR, details all of the weapons and props he provided for that film, and his new book, THE FRINGE OF HOLLYWOOD explains, as its subtitle says, THE ART OF MAKING A WESTERN. 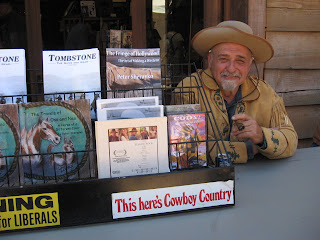 Among the authors signing books inside, and taking part in panels, were Roy Roger’s daughter Cheryl Rogers-Barnett, JR Sanders, Troy Andrew Smith, Larry Kenneth Potts, and C. Courtney Joyner, whose THE WESTERNERS is an unbeatable collection of interviews with Western-makers, in front of and behind the camera. 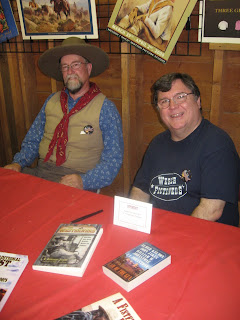 
The Children’s Corral featured all manner of arts and crafts like wool spinning, and money-makin’ propositions like gold-panning. 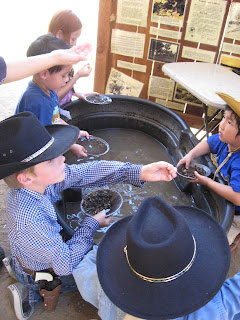 Among non-musical performers was the always impressive and amusing champion quick-draw artist and gun-slinger, Joey Dillon.  Having trained Josh Brolin with a gun for JONAH HEX, his behind-the-scenes training will soon be demonstrated in the upcoming LOOPER, DUKE, GANGSTER SQUAD and THE BIG VALLEY remake.   He’s also working at putting together a series for the History Channel, which he describes as, “basically WILD WEST TECH and SATURDAY NIGHT LIVE squeezed together.” 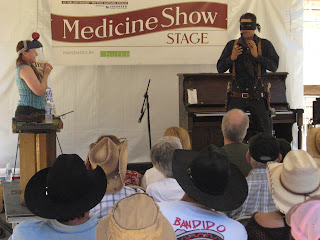 Joey Dillon about to shoot an apple off a volunteer's head

There were five performance spaces, from the intimate to the Texas-size, featuring poets like Waddie Mitchell, Gary Robertson and Doris Daley.  They alternated with music acts like The Quebe Sisters Band, Don Edwards, John Bergstrom and Cow Bop. 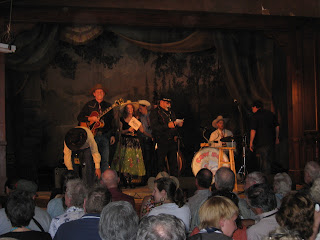 The featured all manner of barbecue, Mexican and Native American food, and the Visalia Cowboy Cultural Committee was present with their famous cowboy peach cobbler and cowboy coffee.  I tried an Indian dog, which was a hot-dog cooked in fry-bread; like a corn-dog, only not rancidly sweet.  At the food court I ran into Jeffrey Richardson, who curated the wonderful new Colt Firearms show at the Autry, and actor Mike Gaglio, who was enjoying his last day wearing a scruffy western beard, knowing he’d have to shave it on Sunday, to play a military part in a web series. 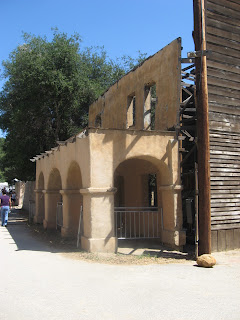 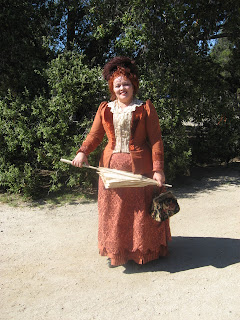 As always, my favorite part of the event was walking the Western street, strolling along the boardwalk, trying to recognize where things were shot, admiring the folks who came in costume, the horses, and odd pieces of rolling stock.  It was a great event, and I only wish I could have come back on Sunday to hear more of the music. 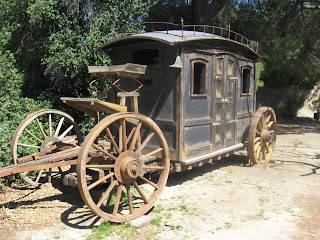 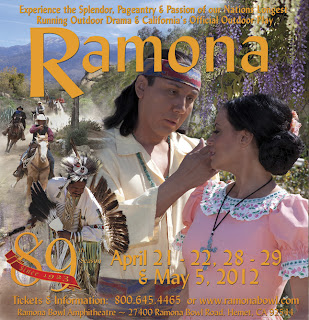 Just as it has been since 1923, RAMONA, ’s official outdoor play, will be presented at the Ramona Bowl Amphitheatre in .  Now in its 89th season, RAMONA is a grand tradition, based on the novel written by Helen Hunt Jackson in 1884.  Her intention was to draw attention to the plight of California Indians in the same way that Harriet Beecher Stowe exposed the evils of slavery with UNCLE TOM’S CABIN.  A work of fiction, but set in real locations, RAMONA was a publishing phenomena, and it was decided to present a play based on the book, in a natural outdoor setting, in the area where the story takes place. 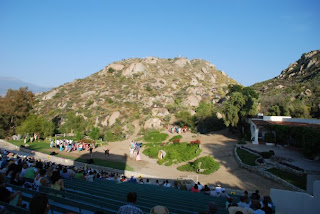 It’s a remarkably colorful presentation, with about 350 participants, and only the two leads are usually professional actors.  Some locals have taken part, in various roles and positions onstage and behind the scenes, for decades.  Among the famous actors who have taken part are GONE WITH THE WIND villain Victor Jory, who played the lead early in his career, and was associated with the show for years, and Raquel Welch, who played Ramona in 1959.  To learn more, and buy tickets, call 800-645-4465, or go HERE.  www.ramonabowl.com 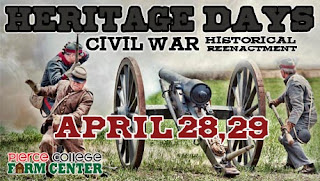 If you want to smell the black powder, feel the thunder of cannon, and be transported back to ’s greatest inner-conflict, visit the as hundreds of re-enactors recreate The Civil War.


Whether you want to give your kids a stirring lesson in living history, or immerse yourself in another time, you can’t beat it. You’ll see cavalry charges, artillery barrages, and infantry assaults.  Each day will feature demonstrations of Victorian dancing, military drill, and skills and crafts from the era.   And you’ll see President Lincoln deliver his Gettysburg Address!  I’ve attended for the past two years, and enjoyed it immensely both times.  To learn more, and order tickets, go here: http://www.piercefarmcenter.com/


To save 25%, use this promotional code: FAMILY.


I am hugely jealous of anyone who gets to attend the event Sara Monacelli is organizing on May 11-13, in Orvieto.  In addition to a great line-up of films to be screened, here are some of the guests who will be making personal appearances:  composer Ennio Morricone; Spaghetti Western stars Tomas Milian, Fabio Testi and Gianni Garko; director Giancarlo Santi (The Grand Duel); screenwriter Sergio Donati (Once Upon A Time In The West); editor Nino Baragli (all of Leone’s Westerns!); and producer Claudio Mancini (many Leone films).  For more information, go here: http://www.westernfestival.it/


UPCOMING SCREENINGS AT THE AUTRY


And coming on Saturday, September 22nd, the Autry will salute the 75th Anniversary of THE VIRGINIAN TV series.  Cast members scheduled to attend are James Drury, Randy Boone, Gary Clarke, , Diane Roter, and Don Quine, and the moderator will author Boyd Magers.


On Sunday, April 29th, catch a pair of 1970s Clint Eastwood westerns that are rarely shown on the big screen anymore: HIGH PLAINS DRIFTER, directed by Clint, and JOE KIDD, directed by John Sturges from an Elmore Leonard script.


That’s all for today’s Round-up – I’ll be working on a comedy documentary most of week! 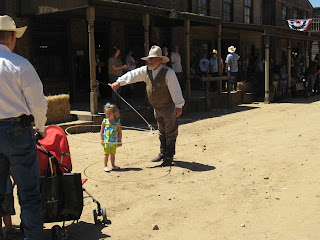