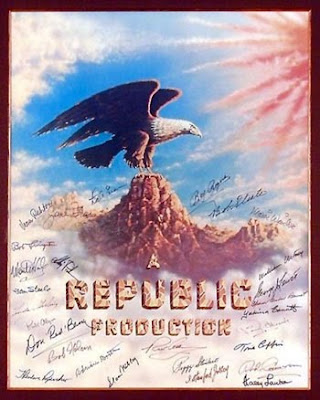 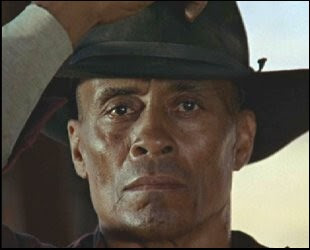 On Saturday, September 25th, CBS Studio Center in Studio City will revert for one day to its earlier identity: the headquarters of Republic Pictures, the great Western and Serial thrill-factory! This FREE EVENT will run from 11 a.m. until 5 p.m., and will include screenings of features, serial chapters and trailers, live swing and western music, guest speakers, celebrities, gun spinners, rope twirlers, trick horses, cowboy poets, memorabilia, a special Republic Pictures stamp cancellation ceremony of the Cowboys of the Silver Screen postage stamps, food – all the stuff that right-thinking kids of all ages love – because after all, Republic’s business was, above all, to entertain kids, and they did it like no other studio!

The site of Republic Studios is steeped in movie history. Mack Sennett bought the land to move his Comedy Factory from Edendale to the San Fernando Valley, but this was just when sound was coming in, and Sennett’s style of comedy was going out. Here W.C. Fields starred in his great Sennett shorts, THE PHARMACIST, THE BARBER SHOP, THE DENTIST and THE FATAL GLASS OF BEER, and Bing Crosby starred in his Sennett two-reelers, but soon Sennett had to sell. Next came Nat Levine’s Mascot Studios, where Tom Mix made his last films, and John Wayne made three serials.

Meanwhile, Herbert J. Yates ran Consolidated Film Laboratories, a lab that processed most of the poverty row studios’ footage. Such companies were always behind in their payments, and in 1935, Yates called in everyone’s paper, took over several small companies, including Monogram Pictures (which would later rise again as an independent) and combined them into Republic Pictures, locating them at the old Sennett/Mascot lot.

In addition to the main event,on Wednesday, September 15th (THAT'S THIS WEDNESDAY), at 7:30 p.m., The Egyptian Theatre will mark the 75th Anniversary of Republic Studios with a special program: "Meet the Stars #7: Meet Roy Rogers," 1941, Republic Pictures, 10 min. Dir. Harriet Parsons. "It’s a Grand Old Nag," 1947, Republic Pictures, 8 min. Dir. Robert Clampett, probably the only cartoon Republic ever made, UNDER WESTERN STARS, 1938, Republic Pictures, 54 min. Dir. Joseph Kane. This is the one that started it all for Roy Rogers – Gene Autry was on strike, and Republic re-tailored the script, about a cowboy elected to Congress, fighting for his constituents’ water rights, to fit Roy. There are tons of parallels with MR. SMITH GOES TO WASHINGTON, which came out a year later! The listing says 54 minutes, but I’m betting they’ll show the version shown recently at the Autry, with the missing scenes back in place. SOUTH OF THE BORDER, 1939, Republic Pictures, 70 min. Dir. George Sherman. It is the eve of World War II, and Federal agents Gene Autry and Frog Millhouse (Smiley Burnett) head to Mexico to foil the schemes of a fleet of foreign spies at a submarine base.

I’ll be having more details as the main event nears, and you can CLICK HERE to go to the official website.

Those of you who read last week’s article about the making of YELLOW ROCK (if you haven’t, CLICK HERE) may remember actor Zahn McClarnon’s fond memories of being a child on the set of WINTERHAWK, and meeting star Woody Strode – and meeting him again, as an adult, in Hollywood. Kalai Strode, son of Woody and Luana Strode (you’ll remember her as the Indian woman at the train station in the opening of ONCE UPON A TIME IN THE WEST), and a very busy second unit director and assistant director, remembers making WINTERHAWK as well.

“I'm watching the Jerry Lewis Muscular Dystrophy telethon and was thinking about when I last saw it back in 1974. My father, Woody Strode, asked me to fly to Montana to write up his part in the movie "Winterhawk." I flew out during the telethon weekend. In Montana I saw many of the Native American extras, many were Blackfoot from a nearby reservation. It was a tremendous experience and I had a lot of fun there with my father. If the Outlaw Inn is still there, you might see two arrows embedded in the ceiling which my father shot there. Of course, that was a long time ago and the arrows may be gone now.”

If any of our readers out Montana way can check out the ceiling of the Outlaw Inn, we’d be most grateful!

Sorry this post went up on Monday rather than Sunday, but my wife and I just got back from a week in Sedona and at the Grand Canyon. Next week I hope to have Part 2 of my YELLOW ROCK story, about the crew.