WHAT AM I BID FOR TRIGGER? 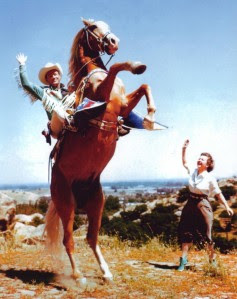 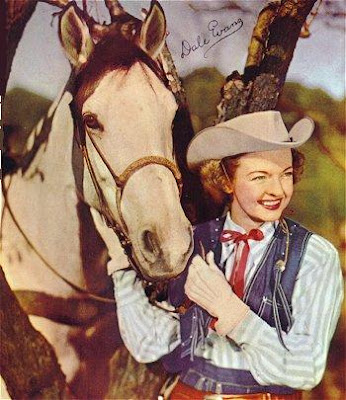 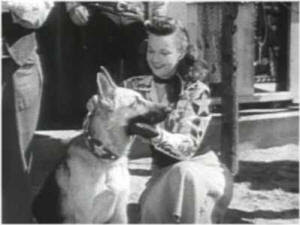 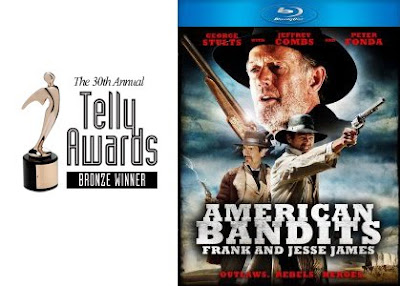 The good news is that the Roy Rogers and Dale Evans Archive, including key artifacts and 120 boxes of Roy and Dale-related stuff have been acquired by the Autry. It will take a few years for archivists to catalog and preserve it all, and make it available. The announcement from the Autry notes that, “Once the archive has been completely processed, key items will be exhibited in a dedicated case in the museum’s Imagination Gallery.”

To read the informative, if somewhat wise-ass story in the New York Times -- it starts with the line, “Wild West kitsch will take over Christie’s plush quarters at Rockefeller Center,” CLICK HERE. But be warned, those illiterate city-slickers call a 'chuck wagon' a 'chow wagon.' To take a look at the items up for auction, and to register to bid, CLICK HERE. To read a touching Christie-provided interview with Roy 'Dusty' Rogers Jr., CLICK HERE. (Photos from top: Roy and Dale with Trigger, Dale with Buttermilk, Dale with Bullet)

LUCAS AND SPEILBERG LET NORMAN ROCKWELL OUT OF THE VAULT

Remember that scene at the end of RAIDERS OF THE LOST ARK, where the Ark of the Covenant is sealed in a wooden crate and hidden away in a massive warehouse, never to be seen again? Well, enthusiastic Norman Rockwell collectors Steven Speilberg and George Lucas have lately been accused of the same thing by the art world, for refusing to lend their pictures to Rockwell exhibitions.

They’ve made up for it in a big way, by combining fifty-seven of the paintings in one exhibition at the Smithsonian American Art Museum in Washington D.C., entitled, “Telling Stories: Norman Rockwell From The Collections of George Lucas and Steven Speilberg.” The show will run until early 2011. Rockwell gained his greatest fame for the hundreds of covers he painted for THE SATURDAY EVENING POST, mostly depicting cheerful aspects of American life.

Speilberg notes, “I had a great deal of respect for how he could tell stories in a single frozen image. Entire stories.” Lucas notes, “To me the most important part of Rockwell’s work is that it illustrates compassion and caring about other people.” Lucas, who has lived too long in Marin County, adds, “You could almost say he was a Buddhist painter.”

On location in Santa Fe, New Mexico, COWBOYS AND ALIENS star Harrison Ford took a break from acting duties to wed his steady of eight years, Calista Flockhart. The vows were said at the Governor’s Mansion, the wedding performed by Governor Bill Richardson under the legal supervision of New Mexico Chief Justice Charles W. Daniels.

FOLLOW-UP FROM THE 4TH OF JULY

Got a few interesting calls and comments after COWPOKE WHO SERVED. I was able to add Earl Holliman and Cesar Romero to out list. Ron Scheer had an interesting suggestion: Western writers who served might make an interesting list. I agree. Haven't had much time for research, but I learned that Louis L'Amour served in the U.S. Merchant Marines. Charles Marquis Warren, novelist (ONLY THE VALIENT), screenwriter, producer and director who shaped TV's GUNSMOKE and RAWHIDE, served in the Navy in the Photo Science Laboratory. Wounded by a Japanese grenade, he received a Purple Heart, Bronze Star, and five battle stars. And speaking of the 4th of July, that day in 1884 was the birthday of George Trendle, the man who thought up THE LONG RANGER.

And we would be remiss if we did not note the recent passing of a man of the real west, the very last of the Navajo 'code talkers,' who used their native language as a uncrackable code during World War II. Clarence Wolf Guts was 86 when he died, on June 16th, at the South Dakota Veterans home in Hot Springs.

Congratulations to writer-director Fred Olen Ray, who has won the Bronze Telly Award for AMERICAN BANDITS: FRANK AND JESSE JAMES.

WESTERN ROUND-UP HAS A SPONSOR

I'm delighted to announce that the good folks from the Dish Satellite company are our first advertisers -- if you missed their ad, it's on the top left corner of the opening page! If you're looking for satellite service, please click on the link!

How long has it been since you saw Randolph Scott on the big screen? You can, this Saturday, July 10th, at the Autry's Wells Fargo Theatre. It's part of The Imagined West Film Series, and is preceeded by the film that started it (westerns) all, Edwin S. Porter's THE GREAT TRAIN ROBBERY (1903). The show is at 2:00 p.m. And although membership or admission usually gets you in, for some reason it'll cost $5 for members and $9 for non-members. Regular readers of the Round-up may remember that in the April 17th entry, at an event celebrating the issuing of the Cowboys of the Silver Screen stamps, Autry CEO John L. Gray annnounced that, starting in mid-June, The Autry would present a western film festival, commencing with a Roy Rogers picture. June has come and gone, no Roy, no Gene. On August 14th we will get UNDER WESTERN SKIES, which launched Roy's career. The only Autry pictures expected to run this summer are TV episodes during July 24th's NATIONAL DAY OF THE COWBOY event. THE HARVEY GIRLS is running on Saturday, July 31st. Kinda slim pickings for western fans. Yet opening on August 17th is a show, HOW THE WEST WAS WORN...BY MICHAEL JACKSON. Yes, that Michael Jackson. I don't understand some people's priorities.

What a treat for all of you that live East but love West! From June 25th through July 15th, the Forum will be presenting 26 movies – most in double features and a few in triple bills! -- directed by the great Anthony Mann, whose post-war westerns brought a new-found maturity to the form, and gave James Stewart a chance to stretch as an actor as never before. In addition to the westerns being shown, Mann's fine crime and war stories will also be on view. Among the westerns: THE FAR COUNTRY (1955) and THE TALL TARGET (1951) on Friday and Saturday, July 9th and 10th. To whet your appetite -- and this is for everyone, not just New Yorkers - CLICK HERE to see trailers of several of the Anthony Mann westerns.

Unless something unexpected happens, that's it for this week's report. Have a great weekend! And by the way, readers tipped me about both the Norman Rockwell show and the Roy Rogers auction. If you hear something that'd interest the Round-up, let me know!

Happy Trails to you!