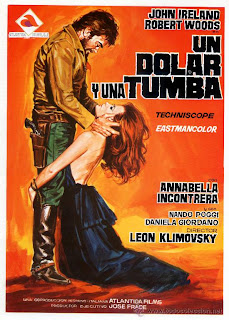 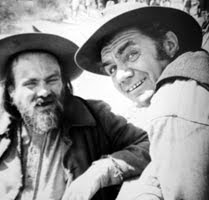 A few years ago, while working as a substitute teacher, I was having lunch in the teachers' lounge when another sub noticed I was reading a Luke Short novel, and we started talking about westerns. His name was Paul Harper. He was a big man, older, and he told me that he had acted in several westerns, and played Ross, one of the scurvy bounty hunters in Sam Peckinpah's The Wild Bunch(1969). That's Paul with Ernest Borgnine in the picture below. Interestingly, this man who played very scary men on the screen, in real life specialized in the side of teaching that requires the greatest patience and kindness: teaching special ed kids. I never ran in to him again.

On Thursday, November 12th, 2009, I was one of the many in the sell-out crowd who packed the Million Dollar Theatre in downtown Los Angeles for the 40th Anniversary showing of The Wild Bunch. It was done as a fund-raiser for a French/American charity outfit called Jules Verne Adventures, and in the advance publicity I'd learned that cast members Ernest Borgnine, Bo Hopkins and L.Q. Jones would be there, as well as members of Sam Peckinpah's and composer Jerry Fielding's family. As the big night approached, I suddenly remembered meeting Paul Harper, and wondered if he knew about the event. But I couldn't find the card he'd given me, and none of the other subs I knew were acquainted with him. So I was delighted to be in the audience, and hear him introduced to warm applause, and see him walking down the aisle in costume, grinning broadly. I tried to catch up with him later, but didn't manage to. Paul Harper died the next day, having had a wonderful time reminiscing with fans and friends and co-workers about a film that was one of the high-points of his life. Among his other westerns, all from 1972, are The Culpepper Cattle Company, Bounty Man, J.W. Coop, and finally Bloody Trail, in which he had the lead role.

THE HOLLYWOOD SHOW
Speaking of Ernest Borgnine, I don't know how many saw the Friday night update of this blog about the Hollywood Show this weekend, featuring stars like Borgnine, but Mike Stern did, and he saved five bucks by following the link I provided. He reports that the show was as expensive as I had warned it would be. Once you'd paid your $20 to get in, actors like Mitch Vogel, last of the Bonanza regulars, were charging $25 for a signed picture. Richard Chamberlain wanted $50 for his paperback autobiography, to which I say: Dr. Kildare, Heal Thyself! (Okay, Chamberlain isn't exactly known for westerns, but Dr. Kildare was created by Max Brand.)

RED RYDER REDUX
This past Tuesday was the 108th birthday of Red Ryder comic-strip creator Fred Harmon Sr. Those who have watched Christmas Story and, wondered who was this puveyor of BB guns that so obsessed Ralphie, can learn plenty by clicking here. If you go to the bottom of the page and click the link 'Bronc Peeler The Lone Cowboy complete text', you'll be able to read a Big Little Book about one of Harmon's earlier characters, page by page. Republic Pictures made a hugely successful series of Red Ryder films during the 1940s, starring either Wild Bill Elliot or Alan Rocky Lane as Ryder, and all with Bobby Blake (later Robert Blake -- yes, that one)as Little Beaver. Almost all of them, and the earlier serial that gave Don 'Red' Barry his nickname, can be found at my primary source for western movies, and every other kind of movies for that matter, Eddie Brandt's Saturday Matinee. You may have seen a featurette about Eddie's on TCM recently. The store is at 5006 Vineland Ave., North Hollywood, CA 91601. (818)506-4242. Tuesday through Friday they're open from 1 to 6 p.m., Saturday from 8:30 a.m. to 5 p.m. For their website, click here.

AUTRY NATIONAL CENTER
Monday 2/15 - Normally closed on Monday, the Autry will be opened on Presidents' Day, and free for kids under 9.
Saturday 2/20 and Sunday 2/21, from 11 a.m. to 1 p.m., kids can learn about the Gold Rush, and pan for gold. On Sunday from 2:00 to 5:00 p.m., you can see Edge of America, directed by Chris Eyre, part of the Native American Women In Film Series. For more about the Autry, click here.

LOS ENCINOS STATE HISTORIC PARK
Sunday 2/21 Living History. From 1 p.m. to 3 p.m. you can step back in time! The living history program features a working blacksmith shop, 19th Century children's games, traditional music, tours of the historic structures, and strolling folks in period costume -- great fun for kids and adults, and you can feed the ducks! They do this program on the third Sunday of every month. Los Encinos is located at 16756 Moorpark St., Encino, CA 91436-1068. (818)784-4849.

SPUDIC'S MOVIE EMPIRE - PERSONAL APPEARANCE BY SPAGHETTI WESTERN STAR ROBERT WOODS
Sunday 2/21 - 1 p.m. - 4 p.m. Though not so well known in the U.S., Colorado-born Woods was a major leading man of European western in the 1960s and 1970s, starring in CHALLENGE OF MCKENNA (see poster above), 4 DOLLARS FOR VENGEANCE, 7 PISTOLS FOR MACGREGOR and a fistful of others. He'll be signing autographs, and there will be a screening of the newly remastered GATLING GUN.
Incidentally, Spudic's is a great movie resource. Actor-writer Eric Spudic buys out video stores to stock his own, doesn't rent, but sells all DVDs for $6, all VHSs for $3 -- and if it's a VHS without a box it's a buck fifty! Lately I've picked up a lot of movies I'd missed -- HANNIE CAULDER, CULPEPPER CATTLE COMPANY and Kris Kristofferson in THE TRACKER to name just a few. Spudic's is located at 5910 Van Nuys Blvd., Van Nuys, CA 91401, and the store is open 7 days a week from noon to 8 p.m.

That's about it for this week -- bulletins as the need arises. If you want to check out any of Robert Woods' movies before the signing at Spudic's, they've got at least a half dozen in VHS for rent at Eddie Brandt's. If you attend any of the events we feature, please let us know what you thought of them. And please tell 'em you heard about it here. And please send me ideas on anything that oughta be included. Happy Trails!