THE COWBOY WAY – ALABAMA – A Review 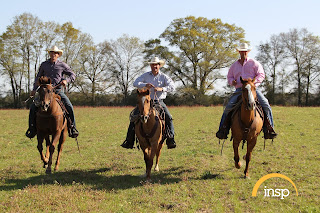 A new reality show premieres on the INSP Network with a replay of the pilot on Saturday, August 5th at 10 p.m. ET, followed by the first official episode on Thursday night, August 10th, at 8 p.m. If you’ve been reading the Round-up, you know that in its seven year existence I’ve never had anything good to say about reality TV. But I am hooked on this show, and I think you will be, too. THE COWBOY WAY – ALABAMA follows the lives and careers of three working cowboys and their families, and it’s informative, entertaining, sincere, and a lot of fun. It brings the 19th century world and the 21st century world together in a continually surprising but entirely believable way, as nothing on TV has done before.

Cody Harris and his wife, Misty, are much-awarded riders who met on the rodeo circuit, and run rodeos in addition to ranching and farming. Bubba Thompson is a skilled carpenter as well as a cowboy, and when we meet him in the pilot, he and his fiancé, Kaley, are planning their wedding, and their move into a house Bubba has built from the ground up. Chris ‘Booger’ Brown is a well-respected animal trainer and cowman. The lone bachelor of the group – his previous lady couldn’t abide by the unpredictable life of a cowboy – he’s dedicated to his grandmother, who makes him breakfast every day. 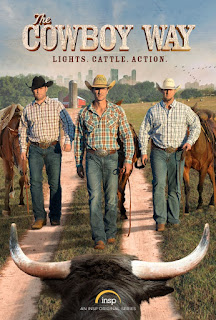 Together, in addition to their own spreads, they own Faith Cattle Company, and their day-to-day challenges are as real as they are unexpected. Like having to come to a baseball field in the middle of the night to round up loose cattle – it’s not even their herd, but the police come to them for help. Or the fact that Bubba is marking more wedding things on Pinterest than Kaley is – later contrasted with his ability to build a crib overnight. Or when a loose bull gets among their cows, there’s not only the adventure of watching them drive the bull away, but Cody’s enlightening explanation of how disastrous having some cows impregnated at the wrong time of year could be.  As a city boy, I had no idea of the economic effect of having the births strung out instead of being around the same time.
And it all seems so natural. At one point Booger goes to the cemetery to talk with his grandfather. We’ve all seen those scenes in movies, and we know how contrived and awkward they usually seem.  But he was just absolutely real and sincere.  One of the best things about the show is that they are such hopeful cowboys. The sad truth is that historically most cowboys never saved any money, and worked themselves to death. But these are all men with a future.

I strongly advise you to see the pilot first, as it really gives you a chance to get to know and appreciate the fellows. Episode one starts with the assumption that you already know who’s who, and takes off with a bang. INSP is so pleased with the show that they’ve already picked it up for a second season!  CLICK HERE to see a trailer for THE COWBOY WAY - ALABAMA. 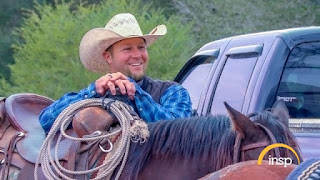 Last week I spoke with one of the show’s stars about his friends, the series, and how a dating show lead to THE COWBOY WAY.  Bubba’s roots in farming and ranching go back several generations. “Lot of my family came from south and central Florida. My grandfather, he was a farmer, we grew up in the nursery business as well as citrus groves, and cattle as well. One of my grandfather’s brothers had some of the first white Brahma bulls back down in South Florida. He did that for a long time, then he swapped over to Hereford cattle. So it’s been in my family for several generations.

Oddly enough, THE COWBOY WAY had its genesis as a result of a dating show. “I did a show back in 2012 called SWEET HOME ALABAMA, as a single cowboy who had a ranch, looking for love. I went all the way to runner-up. At the end of the elimination, it was me and another fellah, and I knew that old gal wasn’t gonna pick me, so I just walked up to her, tipped my hat,  and told her I understood, told her she was making the best decision, and I left her standing there on the stage – I wasn’t gonna be eliminated on national television. The producer of the show and I became very close friends. He spent some time with me here in Alabama, and he decided that he would love to come down here and film a reality show about how we all work together – myself, Booger and Cody. That’s how it started.

“We all knew each other – Booger and I had been cowboys together for close to ten years. We would day-work for other men at their ranches. We would go catch wild cattle out on the pasture; once we needed to rope cattle right off the interstate, for a man whose cattle had gotten loose. And Cody and myself, we roped together (in rodeos). I used to rope calves, and Cody still does. We would practice together and be in competition together, and that’s how our relationship began.” 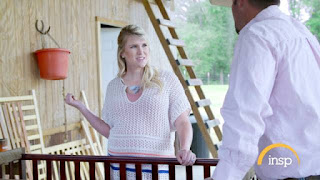 Bubba didn’t meet Kaley on the dating show, but as a result of it, a show Cody had also been a contestant on. “After that, Cody and I put on an event called BULLS ON THE BEACH, we had bull-riding on the beach, and I actually met my wife down there. She was with a big group of ladies, and they didn’t want to come talk to me because they were nervous. Kaley, she wasn’t nervous, so she just walked up to me and talked. I sell Faith Cattle Company hats and t-shirts, it’s just a real cool logo. I gave her a hat, and before she left, I said, ‘Make sure you take a picture and post it on Facebook and tag me in it,’ because I wanted to find out who she was. From that night on we became friends.  I couldn’t ask for a better woman.” 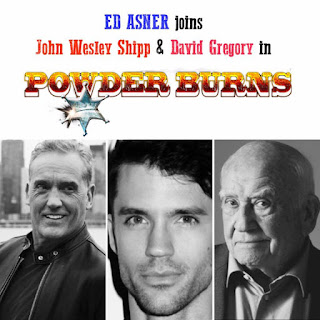 David Gregory’s new Western radio drama, POWDER BURNS, about a recently blinded lawman, has just posted its 6th episode.  Entitled Psalms For a Broken Man, it guest-stars Ed Asner as an aging cowboy who is losing his memory.  This LINK will bring you to all of the episodes, but if you haven’t heard the earlier ones yet, I urge you to start at the beginning. If you’d like to learn more about the series, you can read my interview with David Gregory HERE.