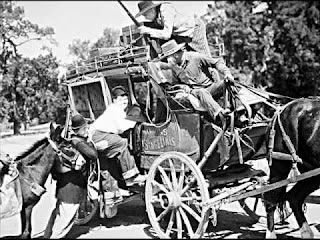 America’s finest classic film festival begins this Thursday in Hollywood.  Ever since 2010, Turner Classic Movies has brought attendees the finest movies in history under the best of circumstances, and this year is no exception.  ‘Make ‘em laugh!’ is this year’s theme, and comedies outnumber everything else, but there is enough Western interest to keep us placated until next year.

The main venues are the Grauman’s Chinese Theatre (technically the TCL Chinese) with its immense IMAX screen; three theatres within the Chinese Multiplex; Grauman’s Egyptian Theatre; The ArcLight Cinerama Dome – and yes, there will be films in Cinerama; The Montalban Theatre; and poolside at the Hollywood Roosevelt. 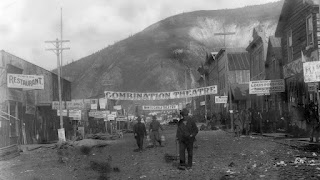 Thursday night at 6:15 they’re showing a new documentary, DAWSON CITY: FROZEN TIME.  Back at the turn of the 20th century, in the middle of the Yukon gold rush, Dawson was the last stop for movie prints that had been shipped from town to town across the country.  No one thought it was worth the expense to ship them back to Los Angeles, so more than 500 reels of film – tons of them Westerns, several about the gold rush -- were used as landfill under a skating rink, and the land was so cold that the permafrost preserved many thought-to-be-lost films starring William S. Hart, Lionel Barrymore, Lon Chaney, Douglas Fairbanks, Harold Lloyd, and many others. 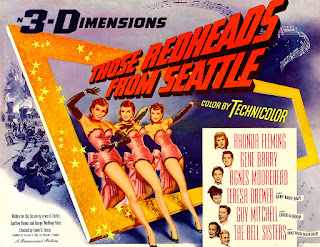 On Friday night at 7:15 with THE GREAT NICKELODEON SHOW, the earliest days of movies, when shorts were played as part of vaudeville shows – will be celebrated.  I think it’s a mix of film and live performance.  At 9:15, the festival will premier the restoration of a very rarely seen Western musical – the first 3-D musical ever – THOSE REDHEADS FROM SEATTLE (1953).  It stars Agnes Moorehead as the mother of four beautiful daughters, including Rhonda Fleming, who brings them to the Gold Rush in Dawson! (Agnes also had a son in the Gold Rush named Charles Foster Kane.) It also stars Gene Barry and Guy Mitchell.  The TCM Festival is much like Ringling Brothers’ Circus, in that there is always much more going on than you can see.  At the same time as REDHEADS, other venues will be screening the classic mystery LAURA (1944) starring Gene Tierney; THE TWENTIETH CENTURY (1934), featuring John Barrymore’s finest comedy performance; Val Lewton’s terrifyingly sexy THE CAT PEOPLE (1942) starring Simone Simon; and Mel Brooks will be introducing his comedy HIGH ANXIETY (1977). 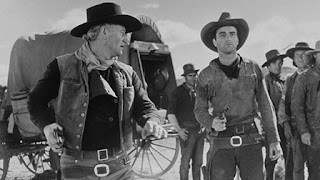 Saturday morning starts at 9 with a screening of the best movie about cowboys and cattle drives ever made Howard Hawk’s RED RIVER.  At 3:45 pm, Laurel and Hardy’s Gold Rush comedy, WAY OUT WEST (1937) will be introduced by Dick Cavett.  Incidentally, when they sing The Blue Ridge Mountains of Virginia, and Stan sings a bass solo, that’s actually future Oscar nominee, for THE ALAMO, and voice of Francis, the Talking Mule, Chill Wills.

On Sunday morning at nine, DR. STRANGELOVE (1964), that movie that made Slim Pickens a star, will screen.  At ten it’s the new restoration of THE EGG AND I (1947), starring Fred MacMurray and Claudette Colbert as city-folk who move to the sticks to become chicken farmers – for better or worse, it was the birth of the Ma and Pa Kettle series, and co-stars Marjorie Main and Percy Kilbride.  Kate MacMurray, daughter of Fred MacMurray and June Haver, will attend.

Finally, at 2 pm they’ll be showing a new documentary, REPUBLIC PRESERVED.  Paramount Pictures now owns Republic Pictures’ film library, and is restoring it – the film features clips from many of their westerns with John Wayne and Roy Rogers, serials, and British quota films, many that haven’t been seen since the original release.

Sadly the festival will lack the great Robert Osborne, but among the many great talents who will be attending will be Carl and Rob Reiner – who will be getting their footprints in cement, Beau Bridges, Dana Delaney, Keir Dullea, Peter Bogdonavich, James L. Brooks, Buck Henry, Norman Jewison, Qunicy Jones, John Landis, Ruta Lee, Leonard Maltin, Bob Newhart, Sidney Poitier, Martin Sheen… the list goes on and on.

While the Festival Passes can get very pricey – packages run from $299 to $2,149, the good news is that you can attend single movies for $20, ten if you have a student i.d.  The singles are stand-bys, so there’s no guarantee that you’ll get in, but it’s certainly worth a try!
To see the complete schedule, visit the official website HERE. 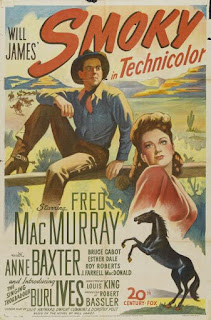 ‘SMOKY’ SCREENING AT THE AUTRY SAT., APRIL 8 AT 1:30 PM
As Part of the Autry’s continuing ‘What is a Western?’ series, SMOKY (1946), will screen in glorious 35mm!  It stars Fred Mac Murray and Anne Baxter, and is directed by Louis King.

Once again, producer, film historian and Western crazy Rob Word will bring his ‘A Word on Westerns’ presentation to the Autry’s Wells Fargo Theatre -- doors open at 10:30, program starts at 11 -- this time examining the elusive world of the Western TV movie and miniseries.  There’s a good argument that most of the best Westerns of the last few decades have been created for the small screen – can any feature top LONESOME DOVE?  Tom Selleck is one of the finest Western leads to come along in years, but aside from QUIGLEY DOWN UNDER, all of his Westerns have been made for TV.  Guests will include stars Stephanie Powers and Jeff Osterhage.  Admission is free with Museum admission – but you have to buy your own lunch!

One of the great frustrations for Western fans is that over the past few years, some of the very best new Westerns have been low-budget independents, which can be extremely hard to track down. Recently WESTERN RELIGION director James O’Brien took a break from preparing his next project, a pirate film, to let me know that WR is now available, for free, online, through Popcornflix, on YouTube.  “Popcornflix is an arm of Screen Media Films, the distributor of WR. They released it free on that venue for the ad revenue. It's not delivered widescreen, how it was shot, but it does get a lot of eyes on it, which at this point is the main objective.”  You can read my review HERE.

Popcornflix offers some other fine films as well, including the dark Australian Western DARK FRONTIER (review HERE), and the comedic New Zealand Western GOOD FOR NOTHING (review HERE).

In next week’s Round-up I’ll have details about the Santa Clarita Cowboy Festival, coming from April 19th through the 23rd at William S. Hart Park – in the meantime you can learn all about it HERE.

I’ll also be paying tribute to a pair of fine talents we recently lost, Western novelist and screenwriter Stephen Lodge, and Alessandro Allesandroni, a musician and whistler who will always be best-remembered for his contribution to Ennio Morricone’s score of A FISTFUL OF DOLLARS.  He did it live for the BBC, above.  Have a great week, and hope to see you at TCM, and at The Autry!