MODERN HORSE-OPERA ‘RUNNING WILD’ REVIEWED, PLUS ‘UNDERGROUND’ RETURNS, ‘THE SON’ AND ‘THE HERO’ ON THE WAY, AND MORE! 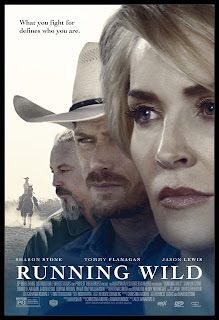 What do you do when you’ve gone through all of your wife’s money, incurred tremendous debt, and still failed to save her family ranch?  One option is to drive your truck headlong into a tree at 80 miles an hour.  The young, sheltered and coddled socialite widow, Stella Davis (Dorian Brown Pham) is blissfully unaware of her dire situation until, with her husband’s death, she learns that she’ll lose everything she owns in ninety days.  Compounding her worries, several starving horses have wandered onto her property, and though she can barely afford to feed her own stock, she hasn’t the heart to push them out.

Desperate to create some income, she and her foreman Brannon (Jason Lewis) sign the ranch up for a prison program that prepares convicts for freedom by teaching them to train horses – the same program, Stella learns, that Brannon came out of.  Now Stella must contend with debts, surly and dangerous cons (including SONS OF ANARCHY’s Tommy Flanagan, Tom Williamson and Michael Girgenti), and ‘friends’ like Jennifer (Christina Moore) who say they want to help, but would love to acquire Stella’s ranch and stud horse at a fire-sale price.  But the biggest threat comes from Jennifer’s sister, Meredith Parish (Sharon Stone), a richer-than-Trump widowed animal-rights loony who thinks that all horses should be free – saddling one is tantamount to slavery!  And she’s a media darling with the meanness, savvy and power to destroy Stella.

The animal activists you love to hate!

Effectively written and acted, populated by interesting characters – particularly the cons – whose stake in the outcome grows as the story progresses, RUNNING WILD is an entertaining and enjoyably hopeful film.  French-born director Alex Ranarivelo has gone from zero to sixty practically overnight, from directing shorts to directing six or eight features back-to-back for ESX Entertainment, of which RUNNING WILD is the first to be released.  And he has a skill with both drama and action – no surprise with the latter, considering his background in street racing.
Interestingly, some of the on-screen talents are stretching their legs in unexpected sides of the production.  Sharon Stone, clearly willing to be beautifully detestable, is one of the producers.  And her screen sister, Christina Moore, co-wrote the screenplay with Brian Rudnick.

While the plot is more than ample to hold your attention, this neo-Western has something on its mind beyond the conflict of its characters – exposing the plight of thousands of wild horses, overpopulating government land, left to starve, or rounded up and incarcerated (am I starting to sound like Sharon Stone’s character?).  A related approach to this problem is shown in the fine documentary WILD HORSE, WILD RIDE (read my review HERE ). 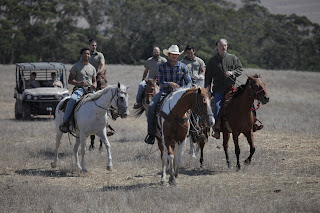 Convicts get to ride -- with the law right behind!

RUNNING WILD is now available at selected theatres, and on demand, from Sony Pictures Home Entertainment. 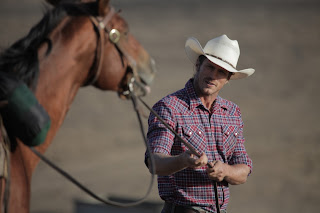 Luckily Brannon has a way with horses. 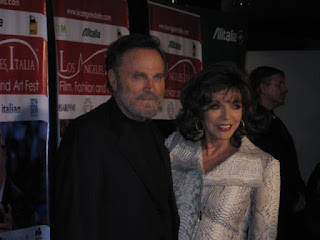 One of the truly not-to-be-missed annual events in L.A., The Los Angeles-Italia Festival, under the auspices of the Consulate General of Italy, is a week of Italian culture and Italian films, and all of the screenings are free, on a first-come, first-seated basis.  In addition to many American premieres of Italian films, as well as some world premieres, there are many screenings honoring Italian actor Marcello Mastroianni, and Italian-American actor Dean Martin.  Some years have included many Italian Westerns, but the pickings are pretty thin this go-round.  On Tuesday, Feb. 22nd at noon, RIO BRAVO, starring Dean Martin, will screen.  On Wednesday, at 10 p.m., a new Western short starring Franco Nero, ALONG THE RIVER, will screen, and Nero will be present.  To find out about all of the other screenings and events, go HERE.

The second season of WGN’s UNDERGROUND will premiere on Wednesday, March 8th.  This is a very involving and exciting series about The Underground Railroad, which was smuggling escaped slaves from Southern states to the safety and freedom of the North.  If you missed season one, keep an eye on the WGN schedule, as my guess is that the previous episodes will be replayed prior to the new shows.  I had the opportunity to talk about the design and look of the show with UNDERGROUND’s Production Designer and Costume Designer – keep an eye out for that soon in True West.  In the meantime, here’s a trailer:

THE SON will premiere on AMC on Saturday, April 8th.  I’ve seen the first two episodes of THE SON, based on Philipp Meyer’s critically acclaimed bestselling novel, and I think it’s terrific, a worthy successor to the network’s HELL ON WHEELS.  The story of a Texas oil family, it’s told in two parallel storylines, both about Eli McCullough.  In 1849, as a teenager abducted by Comanche, he is played by Jacob Lofland.  As a turn-of-the-century oil magnate, he’s played by Pierce Brosnan.  Both story-lines are fascinating, and shockingly true to history.  I was able to speak not only to Meyer, but to producers and several members of the cast – again, coming soon to True West.  And here’s the first trailer --

SAM ELLIOT IN ‘THE HERO’ PICKED  BY THE ORCHARD AT SUNDANCE

Sam Elliot stars as an aging Western actor coming to terms with his life in THE HERO, which The Orchard has picked up for theatrical release this fall.  His co-stars include his beautiful bride Katherine Ross, Laura Prepon, Krysten Ritter, and Nick Offerman.  Director Brett Haley and writer Marc Basch had previously collaborated with Elliot, when he starred opposite Blythe Danner in I’LL SEE YOU IN MY DREAMS (2015).
While there’s not a trailer yet, here’s an interesting clip.

And here’s a clip from a TMZ show, where an unprepared reporter tries to interview Sam Elliot. 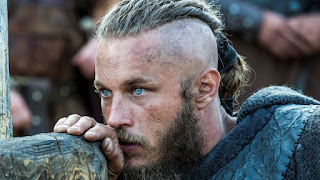 Travis Fimmel, who has a huge following from THE VIKINGS series and the WARCRAFT feature, is finally getting to do a Western.  A few years ago, when there was going to be a feature based on THE BIG VALLEY, he was cast as Heath – and Lee Majors was going to play his dad, the never-before seen Tom Barkley. Sadly, that project shut down when the director went to jail for scamming Massachusetts out of money on another film. But now Travis will be playing Wyatt Earp on a new anthology series for History Channel.  He also wrote the episode, and is producing the series. 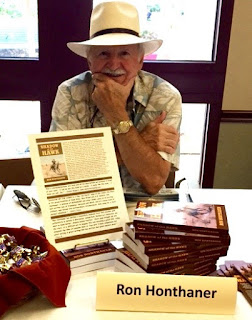 One of the series’ fine behind-the-camera talents, Ron Honthaner, who worked for seven seasons on more than 150 episodes of GUNSMOKE, died on January 10, 2017, after a five-month battle with lung cancer.  After serving four years in the Navy, Ron studied film at U.S.C., and worked on independent features, including the drama THE EXILES (1961), famous for its look at the lives of American Indians in Los Angeles.  A man of many skills, his first job on a Western was on the animated feature THE MAN FROM BUTTON WILLOW (’65). Landing a position in post-production at Columbia—Screen Gems TV, he worked on THE ADDAMS FAMILY and THE WACKIEST SHIP IN THE ARMY until, in 1967, he sold a script to GUNSMOKE.  He would eventually sell the series another script – his two episodes are NOWHERE TO RUN (’68) and BLIND MAN’S BUFF (’72) – and he became Post-production Supervisor and, later Associate Producer on the series.

He also worked on the GUNSMOKE spin-off series DIRTY SALLY (1974).
He worked as an editor on several series, and directed the feature THE HOUSE ON SKULL MOUNTAIN in 1974.  When James Arness returned to the west in the HOW THE WEST WAS WON series in 1976, Ron was Post-production Coordinator, as well as being one of the editors on ACROSS THE GREAT DIVIDE (1976).  He even did a little acting in the Western comedy HOT LEAD AND COLD FEET (1978). 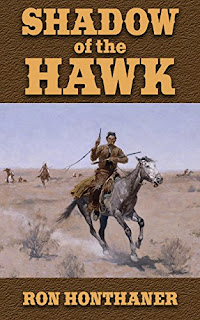 Lately Ron had turned to prose and written the excellent Western novel THE SHADOW OF THE HAWK (you can read my review HERE ), and you can order it from Amazon HERE .

Ron is survived by his wife Eve, son Jed, daughter-in-law Jackie, sister Joan Campbell, and many nieces and nephews.  Donations in his memory can be made to the Motion Picture & Television Fund (www.mptf.com/old/tributegift) or to Hospice Charities of America, c/o Sanctuary Hospice – 150 Paularino Ave., Suite C-125 – Costa Mesa, CA 92626. 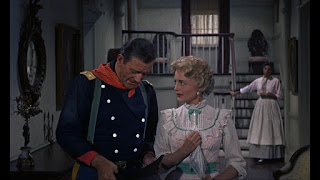 Please check out my article in the February True West Magazine, featuring actress Constance Towers’ memories of working for John Ford on THE HORSE SOLDIERS, with John Wayne and William Holden.  In the next Round-up, I’ll talk about the red carpet at the RUNNING WILD premiere, review the largely over-looked Civil War picture from last year, FREE STATE OF JONES, talk to stunt ace Walter Scott about his work on THE OUTLAW JOSEY WALES and THE COWBOYS, and look in on this weekend’s Civil War Days at Strathearn Park in Simi.  Have a great week! 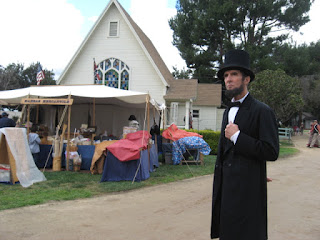