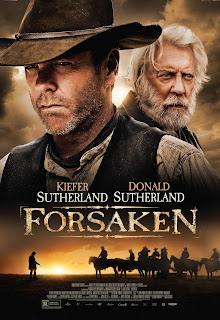 Star Keifer Sutherland and director Jon Cassar, who together spent nine seasons reinventing episodic television with ‘24’, have abandoned all of their high-tech notions to make a deeply affecting traditional Western with FORSAKEN.  And Keifer has achieved a career-long ambition, co-starring with his father Donald Sutherland, a fine actor, and one of the essential stars of the latter part of the 20th Century. 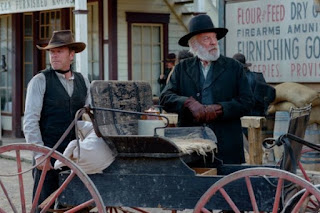 Keifer plays a Civil War Union vet turned gunslinger, who wanders home years after the war’s end, to hang up his guns, and make amends to his family.  Instead he finds his mother dead and his minister father (Donald Sutherland) unforgiving.  The girl he left behind (Demi Moore) is now a woman; in fact she’s married and a mother.  And all of the local landowners are being bought out or run out or burned out by a speculator (Brian Cox) who’s gotten there ahead of the railroad. 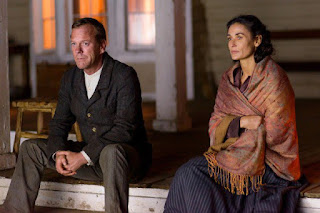 While many of the story elements are undeniably familiar, Brad Mirman’s script, and the cast’s deep-felt performances, create a world where what could be clichés feel like organically grown real-life situations.  At the core of the movie’s success is Keifer Sutherland’s remarkable performance as the heartbroken former soldier.  And there is undeniable magic to the father and son’s co-performances.
Also worthy of particular note is Michael Wincott’s performance as the lead hired gun to the speculator.  As a Southern gentleman in an embarrassing trade, comparisons can be drawn to George Brent in JEZEBEL (1938), John Carradine in STAGECOACH (1939) and Val Kilmer in TOMBSTONE (1993), but Wincott quietly makes the character his own. 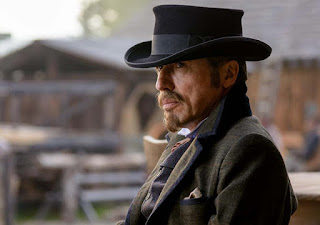 Rene Ohashi’s photography makes full use of the beautiful Alberta locations.  And Jon Cassar handles the western action, from riding to beatings to the best saloon gunfight since THE SHOOTIST (1976), with style and skill.  FORSAKEN, distributed by MOMENTUM PICTURES, is in limited release in theatres.  It’s available now on VOD, from I-Tunes and Amazon. 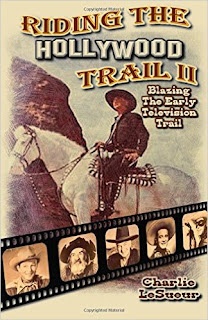 Charlie Le Seuer, Arizona’s official Film Historian, has followed up his popular history of B-Westerns, RIDING THE HOLLYWOOD TRAIL: TALES OF THE SILVER SCREEN COWBOYS, with RIDING THE HOLLYWOOD TRAIL V-2, the story of television’s Western pioneers, especially the men and characters who were Hopalong Cassidy, Gene Autry, Roy Rogers, The Lone Ranger, and the Cisco Kid.

He looks primarily at the years 1949 to 1955, and while most of those pioneers’ careers lasted a few more years, 1955 is not an arbitrary cutoff.  All of those stars and characters had made the transition from theatrical B-Westerns, and their TV shows were similar, family-friendly entertainment.  But 1955 was the year that gave birth to the ‘adult’ Western series; the premieres including GUNSMOKE, WYATT EARP, and CHEYENNE.  From then on, the heroes of the past would be ghettoized to Saturday mornings. 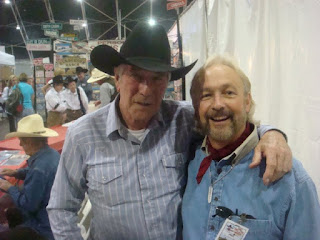 While much has been written about, and sometimes by, these heroes of our youth, Le Sueur has assembled their stories to put them in a context.  For example, William Boyd (Hopalong Cassidy), Gene Autry and Roy Rogers all sought to take control over their careers, and all eventually triumphed.  But Hoppy led the way, faltering at times with small-screen productions that have aged badly.  Gene learned from Hoppy’s mistakes, and surpassed the man in black’s output both artistically and financially.  And Roy had the hardest time of all, mired in legal battles over control of his image.

Then there were the stars who didn’t own their own personas – Duncan Renaldo had a tumultuous life until he became the Cisco Kid.  Though he was no ‘kid’ – he was 52 when the series ended and Leo ‘Pancho’ Carrillo was 75 – their roles were secure.  On the other hand, the producers of THE LONE RANGER thought that because Clayton Moore wore a mask, he could be easily replaced.  Happily, they were wrong.

Charlie goes in depth on all of the characters, from their beginnings in features, serials or radio, through their TV incarnations, and beyond, for characters like Cisco and Lone Ranger, who’ve continued on.  He pays special attention to the oft-ignored sidekicks like Andy Clyde and Smiley Burnett.  He even suggests that Republic Pictures chief Herbert Yates was not above saddling his stars with out-of-place sidekicks – Sterling Holloway for Gene, and Pinky Lee for Roy – to punish them for wanting to leave his stable. 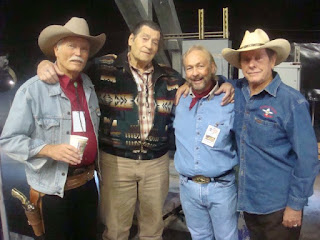 The book also brings to light some of the great early Western TV stars who made a strong initial impression in the new medium, but did not continue.  From Col. Tim McCoy to Gabby Hayes, from Lash LaRue to Russell ‘Lucky’ Hayden, their careers are given the attention they deserve.

One of the real pleasures of reading Charlie’s book is that he personally knows, or knew, so many of the people he discusses.  A lifelong fan of Westerns since they were his required dinner-time viewing growing up, Charlie has run or participated in film festivals and celebrity programs for decades.  Research is great, but there’s nothing like being able to say what Dale Evans told you, rather than what you read in a newspaper article.  Currently he’s hosting two different film series at the Scottsdale Museum of The West, preparing for the HIGH CHAPARRAL REUNION at Old Tucson next month, and teaching film history at Central Arizona College.

RIDING THE HOLLYWOOD TRAIL Volume 2 is a breezily written, informative telling of how the Western transitioned from being a nearly played-out big-screen entertainment to the most popular genre on television for a decade.  It's published by Timber Creek Press, and is available from Amazon, and other fine booksellers.

LIVE EVENTS!
NATIVE FILMFEST, PALM SPRINGS, MARCH 1-6
The 15th Annual festival of films made by and about indigenous people began today, at the Agua Caliente Cultural Museum.  Clicking the link HERE will bring you to a page that includes not just a schedule films to be shown, but links to several trailers.  Wednesday at 8 pm, MEKKO, starring Rod Rondeaux and Zahn MacClarnon, will be shown.

‘WINNING OF BARBARA WORTH’ SCREENS AT MISSION INN, SAT., MARCH 5 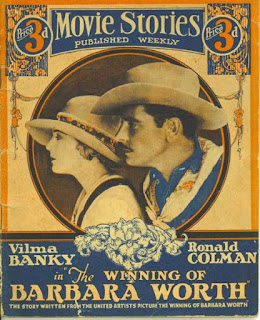 Harold Bell Wright is thought to be the first author to sell a million books, and to make a million dollars.  A film based on one of his two most famous novels, THE WINNING OF BARBARA WORTH (1926), directed by Henry King, and starring Vilma Banky, Ronald Coleman, and a very young Gary Cooper, will screen in the Grand Parisian Ballroom.  It’s a silent movie, with a live piano accompaniment.  The event is a fund-raiser to help preserve the historic artifacts of the Mission Inn, a place where author Wright frequently stayed.  You can learn more, and buy advance tickets, HERE.

It was great to see two Westerns winning Oscars: Best Actor Leo DiCaprio and Best Director Alejandro Inarritu for THE REVENANT, and Best Score Ennio Morricone for THE HATEFUL EIGHT.  I’ve just been too swamped with projects to finish editing my interview with actor Crispian Belfrage, but I hope to have this in the next Round-up, along with my review of a new Indie Western, KILL OR BE KILLED.  And if you’re around Van Nuys this coming Saturday Night, March 5th, come over to the Elks Lodge, at 14440 Friar Street, for dinner at 6, and Old Time Radio at 7.  Under the direction on Exalted Ruler Mike Gagglio, we’ll be reenacting a FIBBER MAGEE AND MOLLY, a GREAT GILDERSLEEVE, and I’ll be doing announcer Fred Foy’s job on the pilot episode of THE LONE RANGER!  Hi-Yo Silver!  Away!
Much obliged,
Henry