NEW WESTERN WITH A NEW EASTWOOD, A NEW SPAGHETTI WESTERN WRAPS IN SPAIN, PLUS AMERICAN INDIAN MARKETPLACE AT THE AUTRY, AND MORE!

A NEW WESTERN WITH A NEW EASTWOOD! 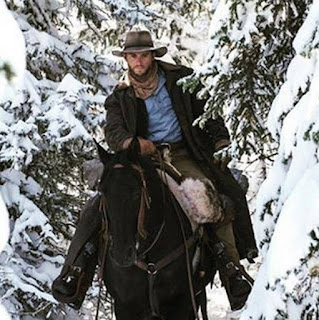 And the new Westerns keep on comin’!  HATEFUL 8 and THE REVENANT are coming for Christmas, JANE GOT A GUN is coming in February, so what, you ask, do you watch in January?  How about DIABLO, the new post-Civil War drama from Momentum Productions and Orion Releasing, starring Clint Eastwood’s son, Scott?

The story of a Civil War vet who must track down the kidnappers of his wife, DIABLO won the Best Narrative Feature award when it premiered at the 2015 San Diego Film Festival in October.  Also in the cast are JUSTIFIED star Walton Goggins – soon to be seen in HATEFUL 8, Danny Glover, and Adam Beach. It’s Scott’s second time to be directed by Lawrence Roeck.  The director’s debut feature, THE FORGER (2012), was the final film of Lauren Bacall, and also featured Scott, Josh Hutcherson, Alfred Molina, and Hayden Panettiere.  DIABLO is co-written by Roeck and his FORGER collaborator Carlos De Los Rios. 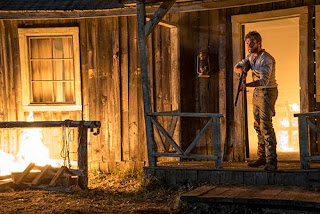 29-year-old Scott Eastwood, who made a splash this year starring in the Nickolas Sparks rodeo-romance THE LONGEST RIDE, has already amassed about 25 screen credits, beginning his career under the name Scott Reeves, and has been directed by his father in FLAGS OF OUR FATHERS (2006), GRAN TORINO (2008) and INVICTUS (2009).

The cinematographer is one of the greatest of his generation, Dean Cundey, who turned heads back in 1978 with the original HALLOWEEN, and went on to DP many other films for John Carpenter, the BACK TO THE FUTURE films, JURASSIC PARK (1993) , APOLLO 13 (1995), and so many more.

DIABLO begins a limited theatrical release on January 8, and will be available on various on-line platforms on January 18th.   Here’s a clip…

EURO-WESTERN ‘THE PRICE OF DEATH’ WRAPS IN ALMERIA! 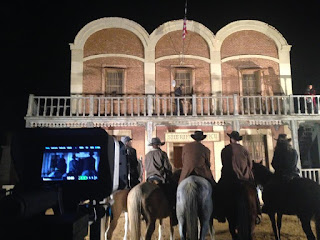 Heard from Danny Garcia that he just wrapped directing his first dramatic feature, THE PRICE OF DEATH.  Part of the Chip Baker Films team, Danny was a writer and producer on last year’s very enjoyable 6 BULLETS TO HELL (if you missed my review, HERE is the link). 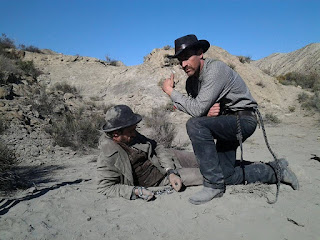 How did he enjoy holding the reins on this one?  “I must say it's been a wonderful experience.”
What’s it about?  “Ex ​gambler​-turned-bounty-hunter Kidd Coffin accepts the risky job of transporting across state one ​Harry Skinner, a ​well ​known dangerous criminal, but unbeknownst to Coffin, a gang of thieves and murderers led by sadist Dick Dixon are also after the high-priced outlaw.”  The three leads were also in 6 BULLETS.  “Ken Luckey stars as Kidd Coffin, Crispian Belfrage co-stars as Harry Skinner, and Aaron Stielstra is the leader of a gang of bandits. Besides them, we have Daisy Hughes as Maddie, Daniel Jordan as Sheriff Hopkins, model Erica Lawrence as Molly, and Al Matthews as the lovable town drunk.” 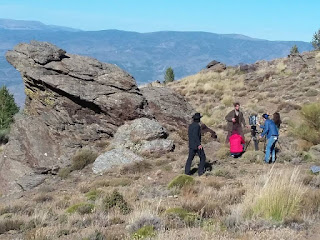 Besides Westerns, Danny Garcia’s other great passion is music, which has led him to create the documentaries LOOKING FOR JOHNNY – THE LEGEND OF JOHNNY THUNDERS (2014) and THE RISE AND FALL OF THE CLASH (2012).  It’s no coincidence that among supporting players in THE PRICE OF DEATH are Ray Gange from the Clash movie RUDE BOY, Richard "Dudanski" Nother, ex drummer of Joe Strummer's 101'ers and Public Image Limited (Johnny Rotten’s post-Sex Pistols band), and Nick Reynolds, harmonica player for Alabama 3 and, as fate would have it, son of Bruce Reynolds, mastermind of Britain’s Great Train Robbery. 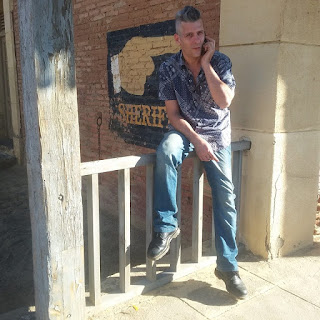 Spaghetti western fans will recognize much of the landscape, and some of the sets.  “The film has been shot at Oasys Mini Hollywood, the set that Leone and (production designer) Carlo Simi built for the movie FOR A FEW DOLLARS MORE, and the exteriors were filmed in Gador, Abla, and Abrucena, in the Sierra Nevada mountains.”  I’ll have more updates as information becomes available. 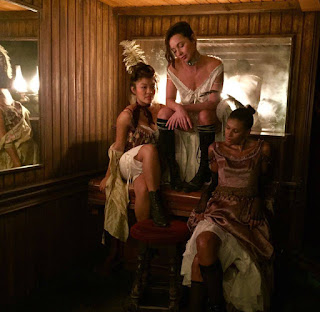 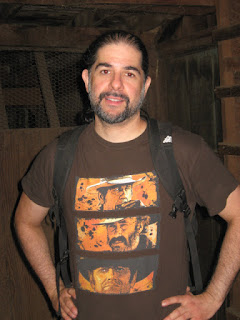 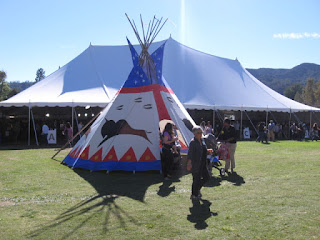 On Saturday and Sunday, November 7th and 8th, thousands of visitors the gigantic tent (26,000 square feet) in back of The Autry to be part of the 25th annual American Indian Arts Marketplace.  Over 200 artists from more than forty tribes displayed and sold their art.  As always, the variety and beauty of the art was remarkable. 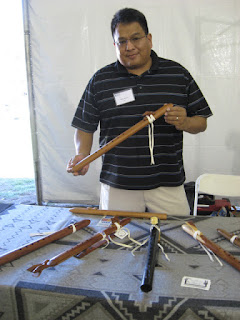 Flute maker Doug Norton is Dine.  He told me, “The flutes can take anywhere from four days to two weeks, sometimes longer.  My nicest flute took me a little over a year.  Sometimes it just takes a while longer because I look at it as an art more than just an instrument.  For the most part I use aromatic cedar.  But I also use other common woods; other exotic woods as well.  The wood does make the sound quality.  Softer the wood, you get a little more vibration in it.  The harder the wood, it’s a little bit clearer.  For the most part I do custom work, so people will tell me they want this kind of wood, they want it in this key, they want it adorned with a specific animal.  Most of the ones I sell on the internet, they’re looking for a flute that is made my a native artist.  Probably more than 95% of the flutes being sold on the internet are not from native artists.”  Learn more at: http://www.tsaileboy.com/ 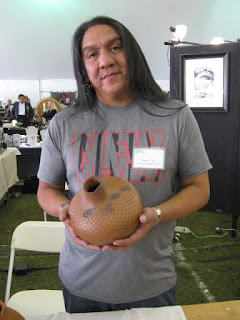 Potter Stacey E. Carr is from the Pueblo of Laguna, Hopi Tribe.  The shapes of his pottery tend to be traditional, but the designs on them are not.  “It’s more contemporary, just because it’s not the white or the grey clay that is traditionally used in Laguna Pueblo, west of Albuquerque.  It’s a red clay.  It’s contemporary in the sense that it was taught by an Acoma potter, but still we’re trying to hold onto what Laguna is actually about. ”

While the overall shapes were balanced, the tops were irregular.  I asked him why. “Traditionally what you are looking at is a flat top.  And so what I’m doing now is just, wherever the clay runs out, that’s where it forms.  So every piece is unique just based on that; wherever you run out of clay, that’s where you run out.” 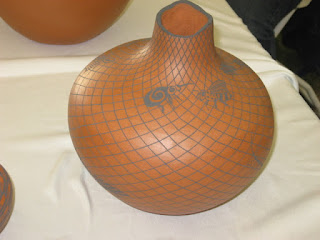 One striking piece is decorated with many different bugs – a weevil, a darkling beetle, a damsel fly, ants, praying mantis.  “Everything represented in this piece, they’re all insects.  They all have six legs, they all have a head, thorax, abdomen.  The message that I have is that everybody really doesn’t like each other, yet we’re all humans.  The name of the piece is, ‘Bee kind to one another.’  That one took six weeks to make.  The fun part is making the pottery.  The painting is a pain in the ass.”  Learn more at http://www.theolddrybones.com/ 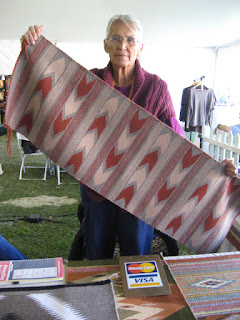 Navajo weaver Mona Laughing, from Crystal, New Mexico, had just won a prize for a beautiful weaving.  “It’s called Crystal weaving; the designs with stripes.  They’re 100% wool, with natural colors.  This one took me about four, five months.”  You can contact her at laughingweavers@yahoo.com. 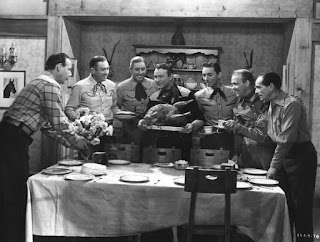 I hope you all had a wonderful Thanksgiving.  One of the many things that I am thankful for is you good folks in over ninety countries who read the Round-up!  It’s great to get feedback from all over the globe, and to see how our shared interests and enthusiasms transcend our differences.