This Memorial Day edition of the Round-up is dedicated to all of our fighting men and women who made the ultimate sacrifice for our freedom.  And in particular to actor Lee Powell, who in 1938 became the screen’s very first Lone Ranger, starring in the Republic serial.  He appeared in several more films, including FLASH GORDON CONQUORS THE UNIVERSE, starring in six ‘Frontier Marshals’ films for PRC, before enlisting in the Marines in 1942.  Sgt. Powell saw action on Tarawa, Saipan, and Tinian, in the Marianas Islands, where he died on July 30, 1944, at the age of 36.  He was posthumously awarded the Purple Heart, the Asiatic-Pacific Area Campaign Medal with two stars, and the Victory Medal World War II. 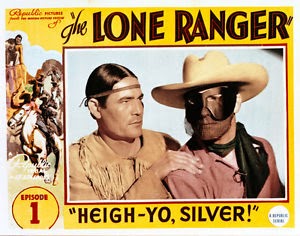 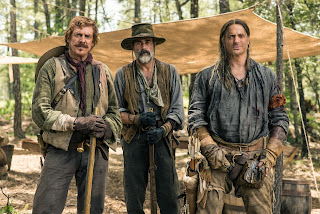 The same production team who brought you the five Emmy-winning HATFIELDS & MCCOYS miniseries is back with the story of Texas statehood, and the formation of the Texas Rangers, TEXAS RISING, beginning Memorial Day night on History.  It’s directed by Roland Joffe, twice Oscar-nominated for THE KILLING FIELD (1984) and THE MISSION (1986). It written by Darrell Fetty and Leslie Greif -- Greif created WALKER, TEXAS RANGER,  Bill Paxton is back, now as Sam Houston, and this time he just might win the Best Actor award he lost to HATFIELDS co-star Kevin Costner.  With so many characters stirring about, he is the heart of the story, just as Olivier Martinez, as General Santa Ana, is the anti-heart, a handsome, swaggering, arrogant swine. 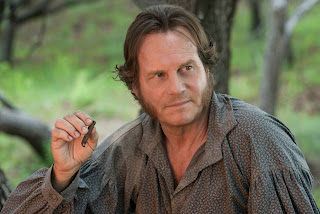 I am not very knowledgeable when it comes to the history of Texas, and I must admit that a character that I thought was so ‘convenient’, post-DJANGO UNCHAINED, that I assumed she was a contrivance, turned out to be not only real, but the basis of the song, ‘The Yellow Rose of Texas’, and is played by Cynthia Addai-Robinson. 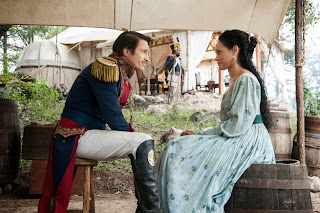 The story opens with the Alamo in ashes, the last few surviving defenders being butchered before the eyes of a handful of their women.  Travis, Crockett, Bowie and all the rest are gone, but Travis’ call for help is still travelling, and many, not knowing it is too late, are still hurrying to answer the call.  Texians, furious at the slaughter at the Alamo, are eager for Sam Houston to attack, but he issues orders to wait, retreating until they can draw Santa Ana into a position where the Texians will have the advantage.  There are accusations of cowardice, and whispers of mutiny. 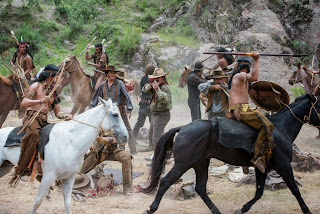 The focus moves frequently, from Houston and his men, to a young pair of would-be Texas Rangers trying to prove themselves worthy, to a friendly if mis-matched redneck and aristocrat, to a low-life extorting money to help people flee, to Santa Ana and his ‘take-no-prisoners’ advance.  There are military battles, Indian attacks, seduction, humor, the occasional throat-cutting and eye shooting.  The story doesn’t always move in a straight line, but it moves, with plenty of action. 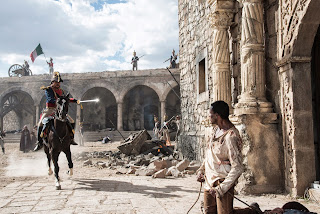 The cast is packed with talent, including Brendan Fraser as Billy Anderson, Jeffrey Dean Morgan as Deaf Smith, Thomas Jane as James Wykoff.  JUSTIFIED fans will be happy to see Jeff Fahey as Thomas Rusk and weasely Jeremy Davies and Knowles.  I got a kick out of seeing Darby Hinton, Dan’l’s son Israel from the DANIEL BOONE series, as Texas President Burnet.

Having seen only the first four of ten hours, I can’t review the show as a whole, but I found the first two nights of the show very entertaining, and I’m eager to see the rest.  Not that I am entirely without criticisms.  Occasionally the script strains to be vulgar – there is excessive talk about soiling or wetting ones clothes, things to be shoved up orifices, and Bill Paxton must have it in his contract that he gets to urinate on-camera at least once per episode.  Ray Liotta, an actor I very much admire, plays an ‘angel of death’ character who has escaped from the Alamo, and is on a private killing spree.  He looks great, but when he speaks, his voice is so contemporary that the ghostly characterization evaporates.  They had Kris Kristofferson there to play President Andrew Jackson – they should have had him dub Liotta. 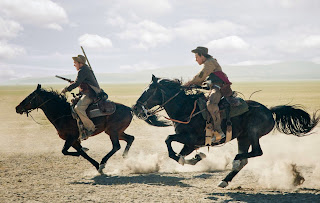 Finally, if you have seen the teaser spot where various men and woman are reading Lt. Col. Travis’ ‘Victory or Death’ letter, you know how beautiful Texas looks (even if it’s really Durango, Mexico).  It doesn’t look like that in TEXAS RISING at all!  Arthur Reinhart’s composition of shots is beautiful, but for some reason, in post-production, some genius decided the entire movie should be in sepia.  So all of the color has been drained from the image, and a yellowish overlay added.  This sort of ‘make it look like old news photos’ idea works fine in a title sequence, but at least on my screener, the entire movie is like this.  I love black and white films, but when you shoot black and white, you use contrast to make up for the lack of color.  There’s almost no contrast here – there are no solid blacks, just murky greys at the darkest, and there’s so much haze at times that it hurts the eyes to watch.  I’m enjoying TEXAS RISING, and I’ll definitely watch the rest; but I may wear shades. 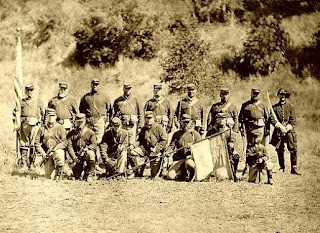 This Saturday and Sunday, travel to Ft. Tejon State Historic Park to enjoy battle reenactments, a replay of the Lincoln/Douglas debates, as well as vendors, food and cooking demonstrations.  To learn more, go HERE . 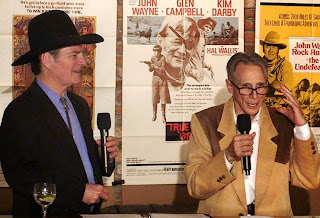 Rob Word’s ‘Word on Westerns’ luncheon and film discussion programs, such a hit last year at The Autry, are back, starting with this past Wednesday’s tribute to John Wayne, whose birthday is May 26th.  Among those attending and sharing anecdotes were Johnny Crawford of THE RIFLEMAN, who costarred with the Duke in EL DORADO, and Edward Faulkner, a member of the Wayne stock company, who appeared in MCCLINTOCK!, RIO LOBO, THE GREEN BERTS, CHISUM, THE UNDEFEATED and HELLFIGHTERS.  Also there to remember were actor Frank Pesce, and music was provided by The Suguaro Sisters, accompanied by Will Ryan.  The next event will be in July, and I’ll fill you in as soon as I have the details. 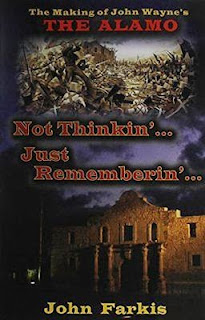 Have a great Memorial Day!  On Tuesday, you can buy your own Blu-Ray copy of MAN, PRIDE & VENGEANCE from the good folks at BLUE UNDERGROUND.  Next week I’ll have details about a new HBO miniseries about lawman Bass Reeves.  And soon I'll have my review of John Farkis' book about the making of THE ALAMO!

All Original Contents Copyright May 2015 by Henry C. Parke – All Rights Reserved