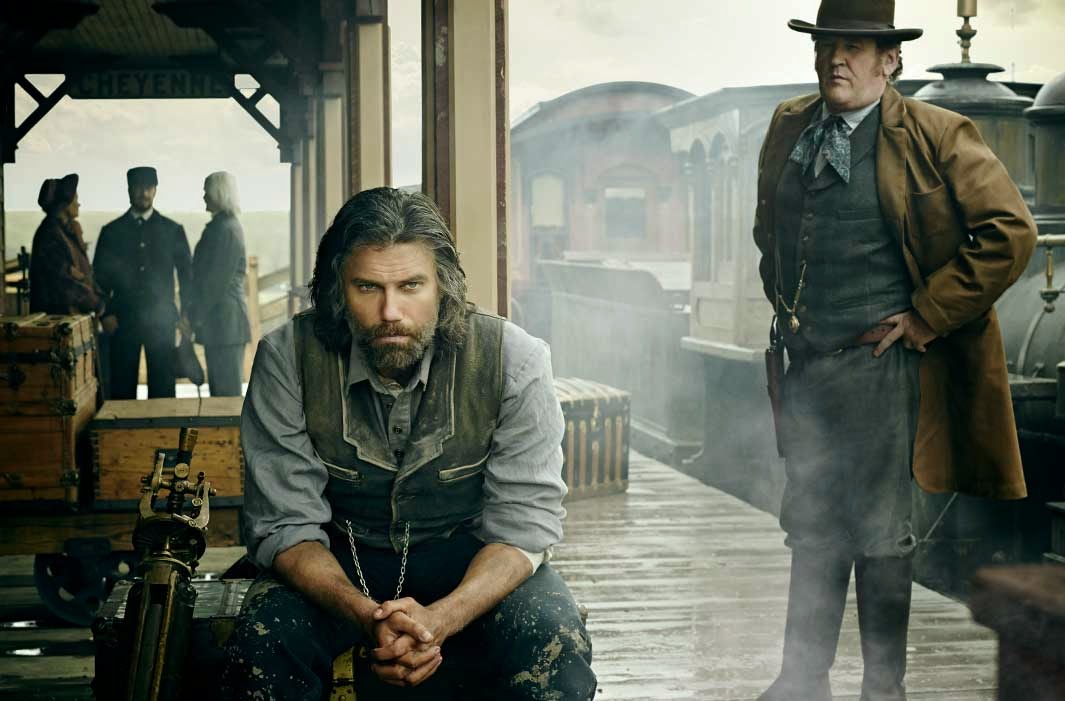 HELL ON WHEELS, AMC’s series about the building of the Trans-Continental Railroad, seen through the eyes of former Confederate officer and railroad engineer Cullen Bohannan (Anson Mount), and ethically challenged railroad robber-baron Doc Durant (Colm Meany), and  nearly a dozen other characters, returns for season four on Saturday, August 2nd.  And if you need to refresh your memory, or fill in some story holes, AMC will be running the entire first three seasons on Friday, August 1st – check your local listings for times!

THE ELUSIVE EDEN is the first episode of the new season, and it opens in the winter of 1868, with Durant, broke, proving Proverbs correct, that ‘Pride goeth before a fall,’ in the most spectacular fashion, when he decides to lay track across a frozen lake!  It doesn’t exactly solve his financial problems, but it’s a wondrous thing to see – I rewound and watched it three times.

Cullen, meanwhile, is in one helluvah fix as a prisoner in the Mormon fort, under the thumb of the Swede, who murdered the minister being sent to run the fort, and assumed his identity.  Last season, while investigating a shooting by a member of a Mormon family, Cullen slept with a young woman, then hung her kid brother for a crime their father probably committed, and only escaped execution himself when the woman’s pregnancy was revealed.  Now he is married to her, she is about to give birth, and he is living with her family.  (Kind of puts any in-laws problems you may be having into perspective, doesn’t it?)

The portable town of Hell on Wheels is now located in the burgeoning city of Cheyenne, Wyoming, which appears to be the exclusive property of Durant: he’s even installed his own Mayor, Mickey McGinnes (Phil Burke), adding to his duties as saloon operator and pimp.  Present also is former Indian prisoner, sometime-whore and sometime-nurse, Eva (Robin McLeavy).  Missing is her man, Elam (Common), whose heart she broke when she gave away their baby – he’s presumably dead.  Elam’s friend, fellow former-slave Psalms (Dohn Noorwood), is also back.  The minister Ruth (Kasha Kropinski) is also back, and in charge of the Mormon boy Cullen rescued after the Swede had slaughtered his family.

And there are some new folks in town.  Much to Durant’s chagrin, newly-elected President Grant (Victor Slezak) has sent a dapper pack of enforcers-in-politicians-clothing to do his bidding. They ain’t subtle.
The two opening episodes, THE ELUSIVE EDEN and ESCAPE FROM THE GARDEN focus, as you would guess, on Cullen’s plans to leave the Mormon Fort.  I found some of the ideas better than their execution, but to be fair, the versions I saw were not final cuts, and based on their history, I have great faith in the production company to make this work.

One surprise is that Cullen has a new new wife: Siobhan Williams, who played his Mormon bride last season, is now a star on THE BLACK LIST, and has been replaced by Canadian actress MacKenzie Porter.  So catch up on any episodes you don’t remember, because Saturday HELL is back ON its WHEELS, and this time for thirteen episodes instead of the previous ten-episode seasons! 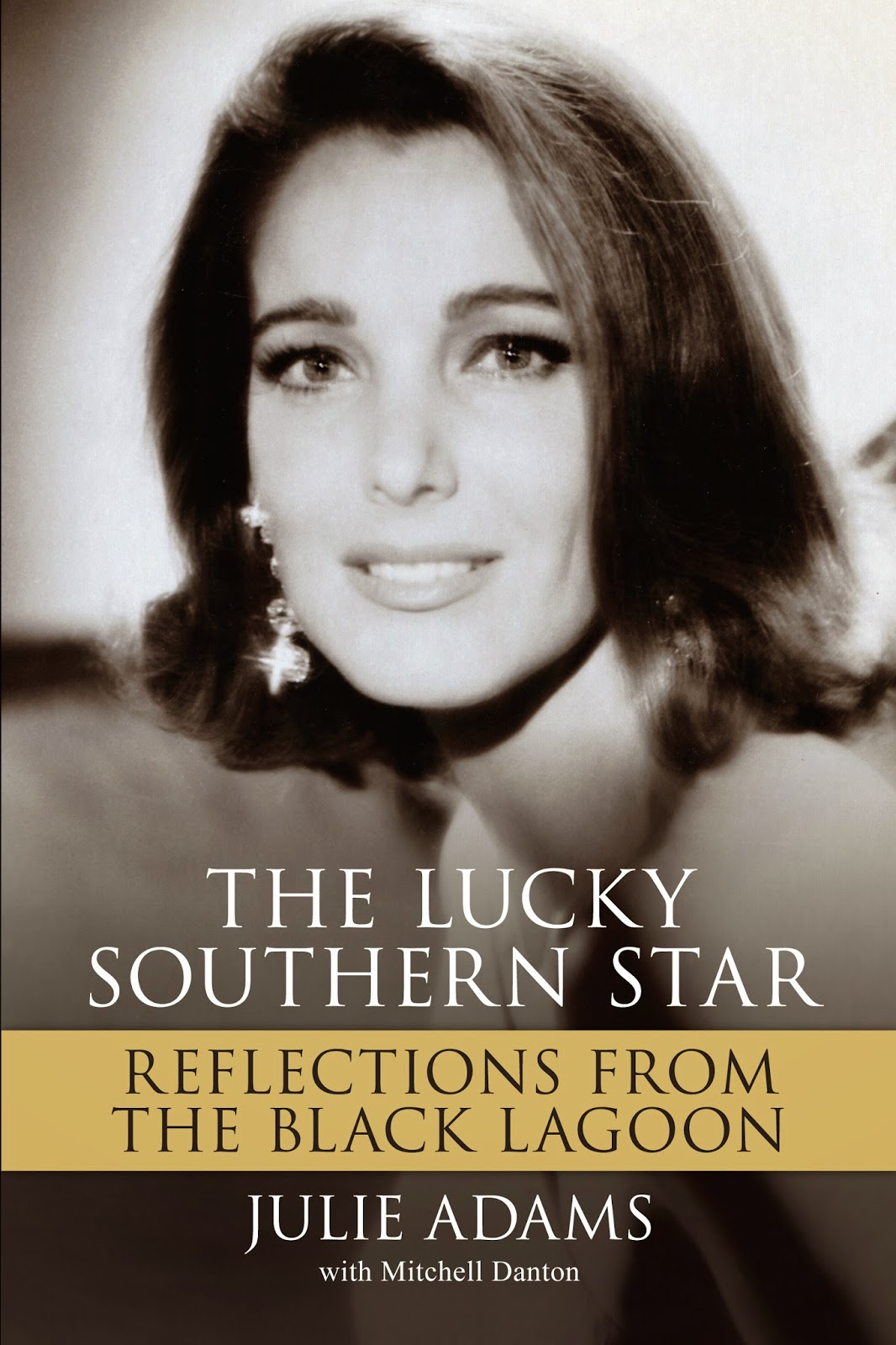 A good biography leaves you wanting to know more about its subject; reading one often leads to a list of movies I want to watch or books I want to read.  But it’s unexpected to finish an actress’ autobiography, motivated to seek out both Pirandello’s plays, and THE CREATURE FROM THE BLACK LAGOON!

But Julie Adams has written a very unexpected memoir with THE LUCKY SOUTHERN STAR: REFLECTIONS FROM THE BLACK LAGOON.  It is an entertaining, insightful and informative read from start to finish.  In becoming a working professional actress, Julie Adams’ timing was ideal, because her career stretched between so many different stages of the film industry.  When she started out in 1949, it was the tail end of the studio system, and her formative acting years were spent under contract to Universal.
Then came freelancing at many studios, big and small, and increasingly appearing in the growing monolith of television.  Later still, while continuing in supporting roles on TV and in features, she works extensively in theatre, sometimes quite small theatre, but she shows her respect for those smaller paying audiences, and respect for the work.  She also clearly respects the professionals she worked with in television: I was struck by how often she mentioned by name the writers of particular TV episodes that impressed her.

This is not a ‘tell-all’ book.  I have no doubt that not everyone in the business was a joy to work with, and I am sure that so beautiful an actress had to work hard to keep the wolves at bay.  But if she hasn’t got anything good to say about someone, they just don’t get a mention.  She’s written the book with one of her two sons, TV editor Mitchell Danton, whose father was the handsome and debonair 1950s and 60s leading man Ray Danton.  Even after their divorce, Julie has nothing hard to say about him, and after he became an in-demand director, he often cast his ex-wife.  Maybe she’s just as nice as she seems to be.

Unquestionably Adams is best known to audiences for starring with ‘the Gillman’ in CREATURE – and for the white one-piece that made a bikini seem pointless.  But she also had a very extensive Western career.  Her first speaking role was in one of the tight-budgeted Lippert movies, 1949’s THE DALTON GANG, for silent writer/director and serial whiz Ford Beebe, opposite Don ‘Red’ Barry.   That led to a six-picture contract with Lippert – and what a contract!  In a cost-saving experiment, six movies with the same cast and crew were shot simultaneously!  They would shoot all the scenes for all six movies on any given set before moving to the next – from school marm to sheriff’s daughter to girl outlaw in rapid succession.  She credits the experience with really teaching her to act.

Under contract to Universal starting in 1951, she worked in big westerns with some of the finest directors, opposite top stars.  She starred in BEND OF THE RIVER for Anthony Mann, opposite James Stewart.  She starred in three for Budd Boetticher – HORIZONS WEST with Robert Ryan, THE MAN FROM THE ALAMO with Glenn Ford, and WINGS OF THE HAWK – playing a Mexican rebel leader – opposite Van Heflin.  And let’s not forget THE TREASURE OF LOST CANYON with William Powell; THE LAWLESS BREED with Rock Hudson, for Raoul Walsh; and MISSISSIPPI GAMBLER with Tyrone Powell.  She has a detailed memory, and great stories about them all.

In TV Westerns she was to play a wide range of characters, many of them villains.  Among the most memorable were the title character NORA in a RIFLEMAN episode, where she tries to con Lucas; a BONANZA episode where her plans to marry Hoss are undermined by her compulsive gambling, and a BIG VALLEY, where she tries to get a monopoly in the rice business, and isn’t above killing Victoria Barkley to do it.

As a ‘cougar’ before there was such a term, she chases Elvis around the desk in TICKLE ME, and does something not so different to Dennis Hopper in his THE LAST MOVIE.  She co-starred with John Wayne, not in a western, but in the cop film McQ.  On the soap CAPITOL she played a fake agoraphobic; on MURDER SHE WROTE she played a man-hungry real estate broker.  But her favorite TV role was as the wife of her BEND OF THE RIVER co-star James Stewart in the short-lived but charming JIMMY STEWART SHOW.

Julie bookends her autobiography with stories of attending monster-movie conventions with her BLACK LAGOON co-stars, something that keeps her busy, and gives her a lot of pleasure.  Her memories of her adventures in film and TV-making, and her sharp insights into the work of her peers, writers, and directors, will give you pleasure as well.   You can purchase THE LUCKY SOUTHERN STAR, and learn more about Julie Adams, including upcoming appearances, at her site, HERE .

You can read my Round-up interview with Julie Adams HERE.

I hope you’re all having a wonderful National Day of the Cowboy, wherever you are!  If you don’t have plans yet, this link will take you to the official NDOC calendar of events all around the country: http://nationaldayofthecowboy.com/wordpress/?post_type=tribe_events&eventDisplay=month