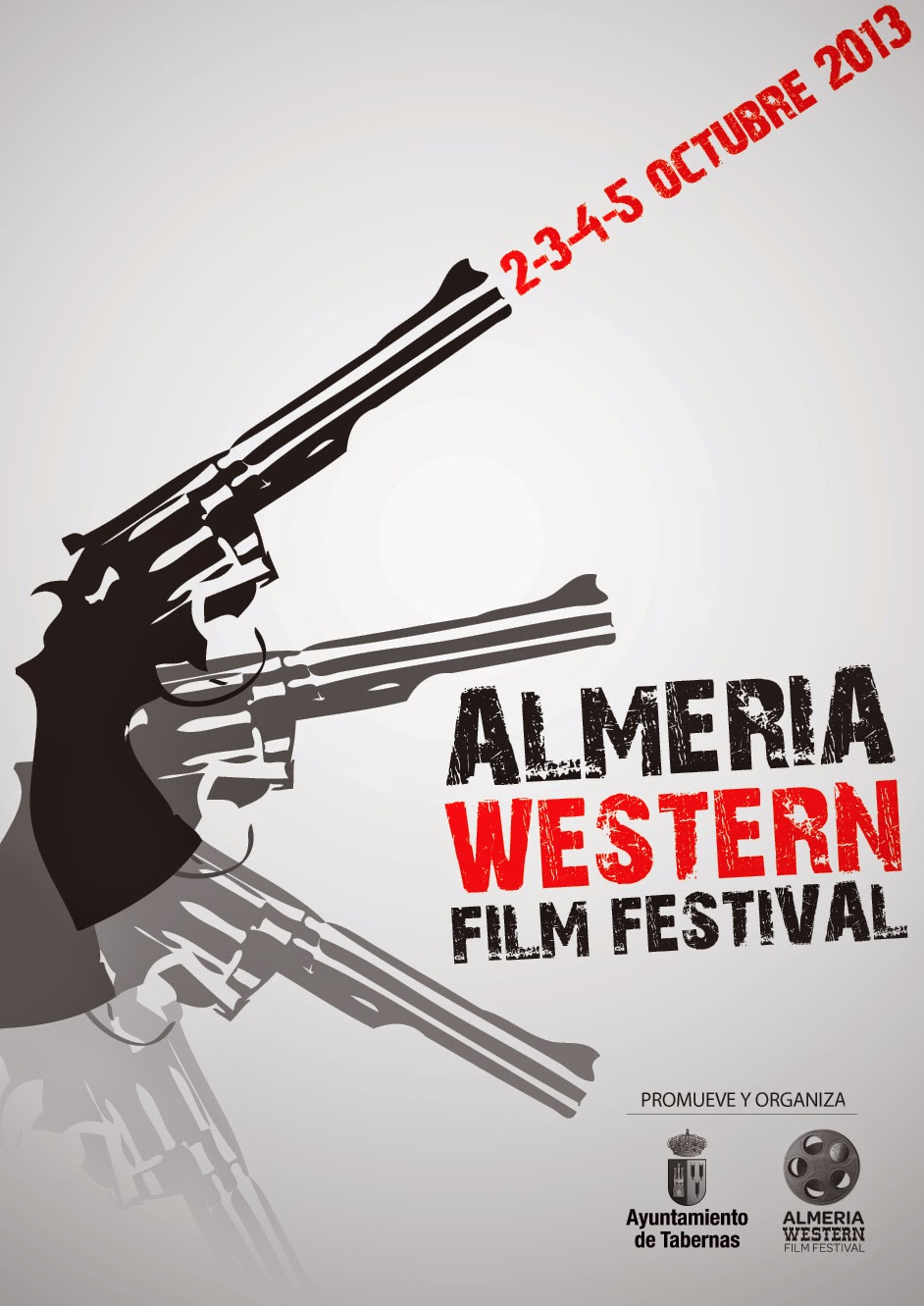 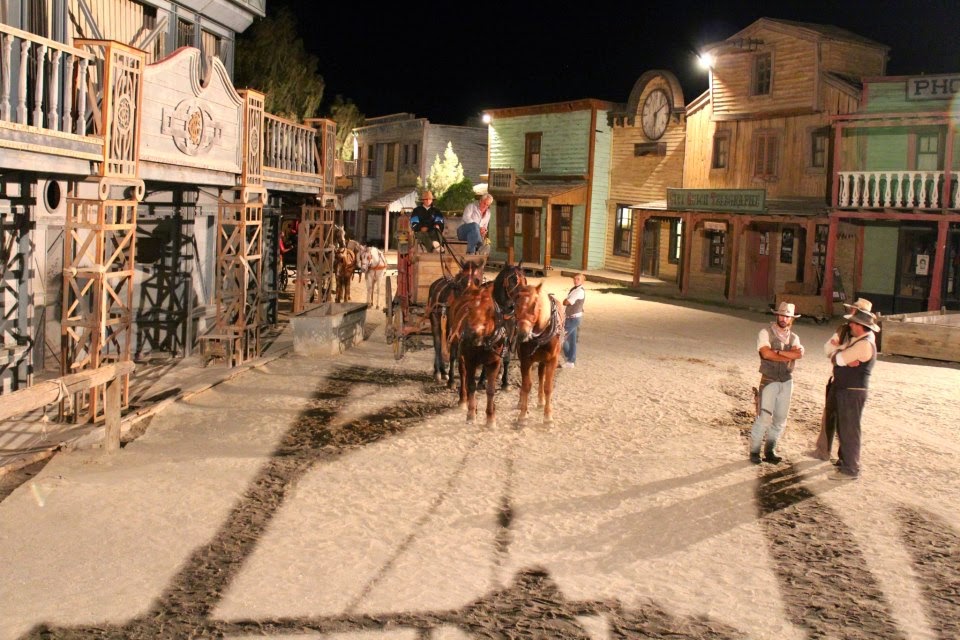 This would happen the year I’m invited to be a judge.  I’ve just learned through Tom Betts’ Westerns… All’Italiana that THE ALMERIA WESTERN FILM FESTIVAL, created and run with great success for three years by Danny Garcia and Cesar Mendez, has effectively been stolen by Tabernas Mayor Mari Nieves Jaen, who went behind the Fest creators’ backs and registered the festival name himself.  He intends to have the festival, or rather a festival of the same name, run by others more simpatico with politicians who are more interested in having their pictures taken with actors than actually having a film festival.  You can read much more here: http://westernsallitaliana.blogspot.com/2014/06/duel-in-sun-for-almeria-western-film.html 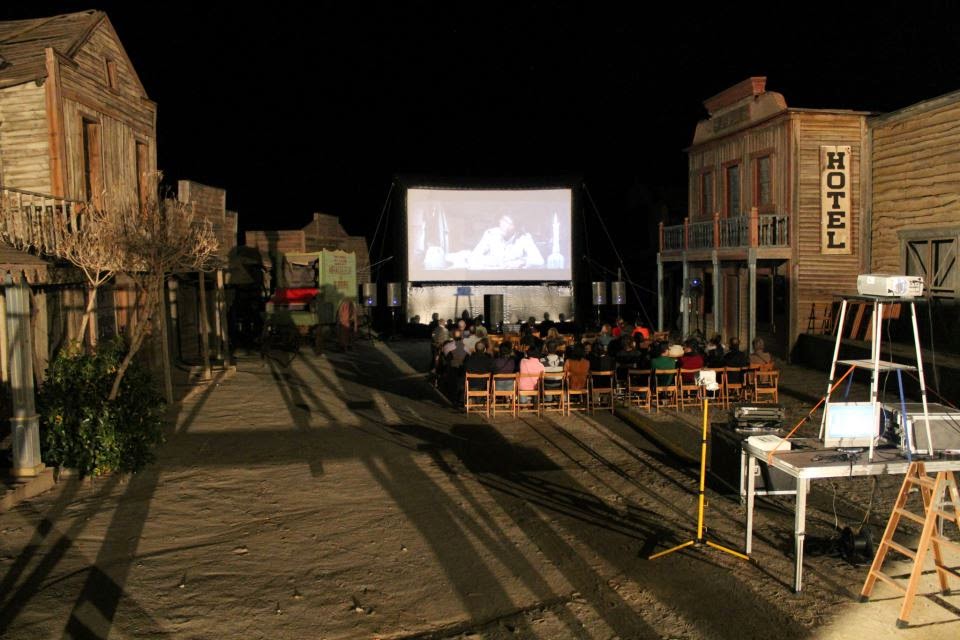 On September 13th, Lifetime, a network never-before associated with Western fare, will premiere the two-hour movie DELIVERANCE  CREEK, from the phenomenally successful author of THE NOTEBOOK, MESSAGE IN A BOTTLE, A WALK TO REMEMBER, NIGHTS IN RODANTHE and so many more, Nicholas Sparks.  This is the first show he will be producing for television.  As you can see from the trailer, this one has a lot of potential.  Best of all, it’s both a stand-alone movie, and a back-door pilot, so if it meets with success, it could lead to a series.

Starring red-headed beauty Lauren Ambrose, a busy feature and TV actress who made her bones on SIX FEET UNDER, the revenge tale takes place during the Civil War, which finds her a young window with three children, doing whatever it takes to protect them.  Also in the cast are Christopher Backus of YELLOW ROCK, Riley Smith of GALLOWWALKER, Barry Tubb of LONESOME DOVE, LEGEND OF HELL’S GATE and many others, and Skeet Ulrich of INTO THE WEST  and RIDE WITH THE DEVIL.  Director Jon Amiel has marshaled a wide range of TV and features, including the groundbreaking BBC series THE SINGING DETECTIVE, actioners like ENTRAPMENT and COPYCAT, comedies like THE MAN WHO KNEW TOO LITTLE, and recent vid-dramas like THE TUDORS and THE BORGIAS. Screenwriter Melissa Carter previously scripted vidmovie MISTRESSES, and episodes of JANE BY DESIGN and LYING GAME.

I CAN’T MAKE IT ANY EASIER FOR YOU TO WIN!  I’ve been getting complaints that my questions are too tough!  This time I’ve included some visual aids.  THIS THURSDAY, June 19th, The Red Hot Rhythm Rustlers will take to the stage of the Repertory East Playhouse at 24266 Main Street in Newhall, CA 91321.  This concert, like all the concerts in this series, are sponsored by Jim and Bobbi Jean Bell, the great folks who run the Outwest Western Boutique and Cultural Center – click the link at the top of this page to learn all about them. 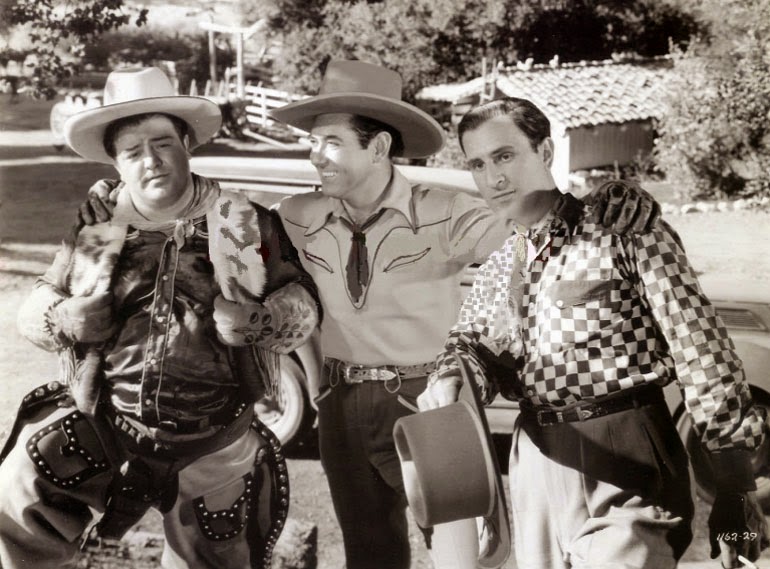 Marvin O’Dell, who this year won the Will Rogers Award from the Academy of Western Artists for his song, ‘Don Edwards For President’, and the Wrangler Award from the National Cowboy and Western Heritage Museum, leads the Western Swing band that is the Rustlers, which also includes Audrey McLaughlin, Gale Borre Rogers, Dawn Borre Pett, and Tom Boyer.  Their harmonies are excellent, their playing first rate, and they play a mix of classics, new material, and songs from the great B-westerns.  Here’s the Rustlers performing Arizona Song for the WMA last year. 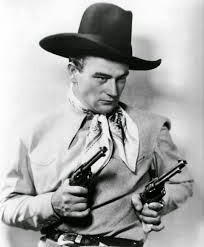 And that brings us to how to win a pair of free tickets to the show, again courtesy of Outwest!  I was thinking there was a movie called RIDE, COWBOY, RIDE, one of the band’s best songs, (whose song was it originally?) but there’s no feature by that name.  But there are two features with similar titles, RIDE ‘EM COWBOY (1942) and RIDE HIM COWBOY (1932).  The first stars a famous comedy team, backed by Dick Foran and Johnny Mack Brown, and the second stars a man who, ironically, rides a horse named Duke.  To win the tickets, send an email to swansongmail@sbcglobal.net, and include the names of the stars of both movies, your name, address and phone number, and be sure to put Red Hot Rhythm Rustlers in the subject line.  The winner will be randomly selected from all correct entries in the next day or two! 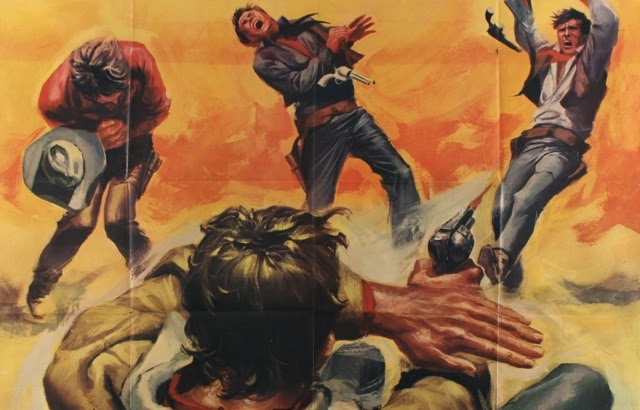 On Wednesday, June 18th, as he does on the third Wednesday of every month, Western historian, filmmaker and raconteur Rob Word will be leading a lively discussion about Spaghetti Westerns, after a delicious lunch.  In addition to the previously announced Euro-western stars Brett Halsey and Robert Woods, also on the dais be Tom Betts, who writes the fascinating and informative blog Westerns… All’Italiana ; and Bill Lustig, director of MANIAC and VIGILANTE, and President of BLUE UNDERGROUND, a video company that restores and releases the crème de le crème of Spaghetti Westerns – for proof, Courtney Joyner and I will be working for him later in the week, doing commentary for Sergio Corbucci’s COMPANEROS, starring Franco Nero, Tomas Milian and Jack Palance.  Lunch is at 12:30, the event is free, but you buy your own grub – and in honor of the special occasion, the menu will include spaghetti and buffalo meatballs in a garlic tomato sauce!  And get there early – at last month’s John Wayne salute, the restaurant was packed, and some attendees were in the courtyard, listening to the p.a. system.

Here’s a clip from a recent luncheon, with Donna Martell recalling working on TV’s KIT CARSON and SHOTGUN SLADE.

‘MAN WITHOUT A SOUL’ TO SHOOT IN LAREDO WESTERN TOWN IN KENT, ENGLAND!

Until Kelvin Crumplin contacted me from across the pond, I had no idea there was a complete Western movie town in Kent, twenty-five miles from the center of London!  The Laredo Western Club has been around for about forty years, and judging by the photos on their site, their facilities are most impressive. There are 28 standing buildings on and around main street, a mining camp, cemetery and apparently access to rolling stock and horses!

Begun by John Truder and run by his daughter Jolene and her husband Mark, Laredo is a popular location for celebrations and corporate events, music videos, commercials and, most importantly, Western movies like DARK COUNTRY has been filmed there,

Now Australian Kelvin Crumplin, producer of the recent thriller FRAGMENT, will be directing and producing MAN WITHOUT A SOUL in part at Laredo.  Based on a pulp novel, Kelvin tells me, “It’s about a government- paid assassin who lets his high profile target live and then turns his guns on the men that hired him.”  It won’t be shot entirely at Laredo.  “This is just (for) the opening stormy night time sequence of our film.  The rest will be shot in Almeria, Southern Spain, the birthplace of the Spaghetti (Euro) Westerns. Or of course in the USA.”  The script is by Australian Jim Davis, and the British producer on the picture is Danny Potts.  Stand by for more details.

I hope all you fellow dads had as nice a Father's Day as I did.  Have a great week, all!