Synergy is everywhere!  If I hadn’t been at the Santa Clarita Cowboy Festival at Melody Ranch this past weekend, I wouldn’t have chatted with Maria Christopher, who was man-ing (woman-ing?) a booth for the Rancho Camulos Museum near Piru, and I wouldn’t have learned that this weekend, Saturday and Sunday, May 3rd and 4th, is your last chance to see RAMONA this year! Just as it has been since 1923, RAMONA, ’s official outdoor play, will be presented at the Ramona Bowl Amphitheatre in .  Now in its 91ST season, RAMONA is a grand tradition, based on the novel written by Helen Hunt Jackson in 1884.  Her intention was to draw attention to the plight of California Indians in the same way that Harriet Beecher Stowe exposed the evils of slavery with UNCLE TOM’S CABIN.  A work of fiction, but set in real locations, RAMONA was a publishing phenomenon, and it was decided to present a play based on the book, in a natural outdoor setting, in the area where the story takes place.

It’s a remarkably colorful presentation, with about 350 participants, and only the two leads are usually professional actors.  Some locals have taken part, in various roles and positions onstage and behind the scenes, for decades.  Among the famous actors who have taken part are GONE WITH THE WIND villain Victor Jory, who played the lead early in his career, and was associated with the show for years, and Raquel Welch, who played Ramona in 1959.  To learn more, and buy tickets, call 800-645-4465, or go HERE.

It was not by chance that Maria Christopher was up on RAMONA, as there is a link between the spectacle and Rancho Camulos.  Author Jackson was in the early stages of writing her novel when a friend encouraged her to visit the Rancho as a possible setting for her story.  On January 23rd, 1882, Jackson took a train out, stayed for a couple of hours, then took a train back.  That brief visit was enough: she set the story there, and when RAMONA took on a life of its own, the Rancho became known as THE HOME OF RAMONA, and has been a hugely popular pilgrimage spot for lovers of the romance ever since.  You can see the Rancho and read about my visit for Ramona Days HERE. 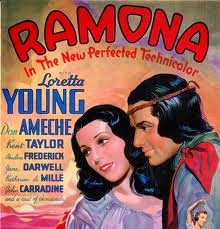 Ms. Christopher also told me that there was considerable Ramona news on the cinematic front.  While the best-known screen telling of the tale is undoubtedly the 1936 Technicolor film directed by Henry King, scripted by 20th Century Fox’s master storyteller Lamar Trotti, and starring Loretta Young and Don Ameche, this was actually the 4th version of the story.  The first, a one-reeler filmed in 1910, directed by D.W. Griffith and starring America’s Canadian Sweetheart Mary Pickford, was actually filmed at the original setting, Rancho Camulos.  The film has recently been restored, and screened at the Rancho.

The other two versions, the 1916 version starring Adda Gleason, and the 1928 version starring Dolores del Rio, are lost.  Only they’re not! A copy of the del Rio version was recently found in an archive in Czechoslovakia!  It’s been preserved, and I’m keeping my eyes peeled for a time when this late silent version, which co-stars Warner Baxter, will be available to see. 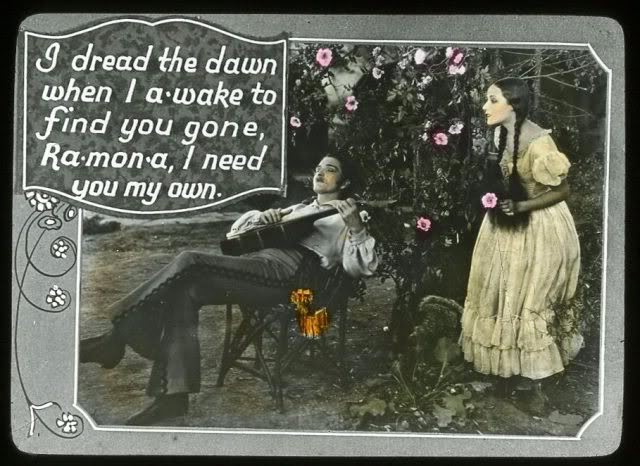 And remarkably enough, a single reel of the 1916 version has just been located at the Library of Congress.  As the original was ten reels, it’s only a small portion of the story.  As the preservation was being done, copies of a few frames were sent to the Rancho, where folks were surprised to find that this 2nd version of the movie was also shot on location at the Rancho!  And it was directed by character actor Donald Crisp, who won the Best Supporting Actor Oscar in 1941 for HOW GREEN WAS MY VALLEY.

I know this is a tiny version of the Round-up.  The fact is, I have an embarrassment of riches to report on, and not the time between the events to do the writing.  In the past couple of weeks I’ve attended the TCM Festival, the WILD BUNCH LUNCH at the Autry, the Santa Clarita Cowboy Festival at Melody Ranch, and The Cable Show at the L.A. Convention Center.  Late as this is, I would have skipped the Round-up entirely this week, and left it all for the next few reports, but I wanted to get the word out on the final performances of RAMONA before it was too late to be of use.

I’ve never managed to get there and see it!  If you do, please let me know how it was!  Until Sunday,

All Original Contents Copyright May 1, 2014 by Henry C. Parke – All Rights Reserved