‘WHEN CALLS THE HEART’ - a film review 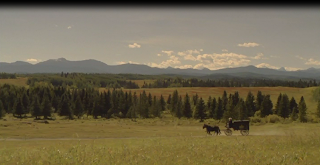 More than any other networks in recent years, The Hallmark Channel and The Hallmark Movie Channel have demonstrated an unswerving commitment to the Western genre.  Their recent SHADOW ON THE MESA won the Wrangler Award from the National Cowboy and Western Heritage Museum, and just a week ago GOODNIGHT FOR JUSTICE: QUEEN OF HEARTS and HANNAH’S LAW were screened by invitation at the Almeria Western Film Festival in Spain.

And just when you thought, with the end of the third season of HELL ON WHEELS, that you’d have nothing new and Western to see on the small screen, this Saturday night the Hallmark Channel is presenting the motion picture WHEN CALLS THE HEART, not just as a stand-alone film, but as a ‘back-door pilot’ to a weekly Western series which will premiere in January.

HEART is tele-written and directed by Michael Landon Jr., and based on Janette Oke’s best-selling Canadian West book series.  Oke and Landon are new neither to Hallmark nor to each other.  This duo has previously produced some of Hallmark’s most popular romantic westerns:  LOVE COMES SOFTLY (’03), LOVE’S ENDURING PROMISE (’04), LOVE’S LONG JOURNEY (’05), LOVE’S ABIDING JOY (’06), LOVE’S UNFOLDING DREAM (’07), LOVE FINDS A HOME (’09), and LOVE TAKES WING (’09). 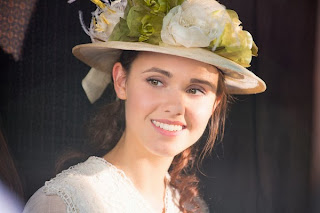 WHEN CALLS THE HEART stars lovely newcomer Poppy Drayton as Elizabeth Thatcher, daughter of a lavishly wealthy Canadian family.  At a time when monied young women were not expected to be educated or work, she’s studied to be a teacher, and is eager to find a position.  Her meeting with handsome young Superintendent Higgins goes awry when he does offer her a position – directly under him – if she wants a plum teaching assignment.   Appalled, she nonetheless doesn’t report the proposition to her father (to my regret – I think a good caning would have perked things up), and she’s disappointed but not entirely surprised when Higgins offers her an alternative teaching position in the distant frontier, at the picturesquely named town of Coal Valley.

Elizabeth’s pretty little rat of a younger sister, Julie (Daisy Head), was patronizing at the very thought of her sister becoming a school marm, but the idea that Elizabeth could survive the experience in the rugged west is, to her, laughable.  She sets out to do everything she can to shake her sister’s fragile self-confidence, enlisting the aid of Edward Montclair (TEEN WOLF regular Daniel Sharman), a dilettante friend who has amazed the Thatchers by actually graduating from the Royal Mounted’s police academy. 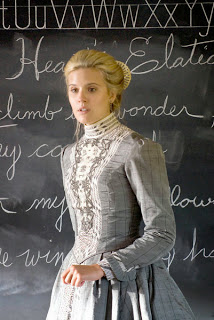 Elizabeth’s resolve grows when she stumbles upon a diary kept by her namesake, her father’s sister Elizabeth (beautiful Maggie Grace), whom nobody talks about.  It seems that when the first Elizabeth was in her early twenties, she became a school marm on the frontier, and was rarely heard from again.  From here the two stories are told in parallel, the aunt’s adventures giving the niece some idea of what to expect – from testing by skeptical students, to wild animals, to tragedies, to handsome Mounties.  When Elizabeth sets out for the west by train, she is perturbed to find that her father has hired the young Mountie to see her safely to Coal Valley before reporting for duty.  It is then, in the last half hour, that the movie becomes less of a romance and more of a western, and soon Marm and Mountie are riding stagecoaches, facing outlaws, and having adventures, and for a romantic western image, the way they enter town cannot be beat.
And when she arrives at her assignment, Elizabeth meets her two bosses and allies, Abigail Stanton (Lori Loughlin) and Frances Tunnecliffe (Jean Smart), who tell her exactly what challenges she will face – matters that Superintendent Higgins, unsurprisingly, failed to mention.

The film is attractively shot, and early on, the mansion and restaurants suggest a Canadian DOWNTON ABBEY, and in fact, Poppy Drayton appears in the coming season of DOWNTON.  The costuming, while often striking, is confusing.  The dresses and jewelry are from the 1880s or earlier, yet a glimpse of an auto and the use of a flashlight sets the story in the 20th century (and a brief close-up of paper-jacketed books on a shelf suggests the 1960s!). 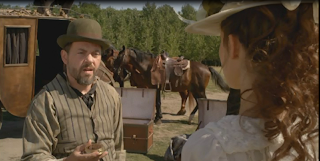 While always interesting, the story doesn't become involving until we start seeing the flashbacks of Aunt Elizabeth – her character and adventures are much more compelling, beautifully photographed, and with more consistent costuming and art direction setting the story in the late 1870s or early 1880s.  Aunt Elizabeth also has a more impressive Mountie than her niece, in the person of Stephen Amell, star of the CW’s ARROW.

While it does take a long time to get Elizabeth out west, happily for western fans, when the series comes in January, Elizabeth will already be in Coal Valley.   And here’s some more positive news: while the movie was shot in Alberta, Canada, the series is being lensed in and around Telluride, Colorado, an event that Colorado Governor Hickenlooper and Hallmark President Bill Abbott jointly announced, noting that it’s the first TV series shot in the area since FATHER DOWLING MYSTERIES in 1991!   Considering how many U.S.-set westerns are shot in Canada, it’s nice to see some traffic flowing in the other direction. 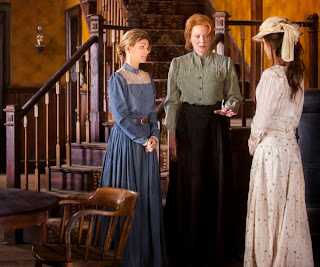 There will be some changes in going from movie to series, including that Elizabeth will now be played by ARMY WIVES regular Erin Krakow.  The male romantic lead will be Daniel Lissing of LAST RESORT.  And happily, Lori Laughlin will return in her role of Abigail Stanton.

WHEN CALLS THE HEART will premiere on The Hallmark Channel on Saturday, October 19th, at 9 pm, East and West, preceded by five of Janette Oke’s LOVE COMES SOFTLY films.

Next week I’ll have a review of a delightful video, LOST & FOUND – AMERICAN TREASURES FROM THE NEW ZEALAND FILM ARCHIVE, and a look at highlights from the Almeria and Lone Pine Western Festivals.