Although there are no story details yet, one can guess from the title that it will be a spoof of THE MAGNIFICENT SEVEN.  Movie will star Sandler, and will be written by Sandler and Tim Herlihy, whose previous collaborations include BILLY MADISON, HAPPY GILMORE, THE WEDDING SINGER, THE WATERBOY, LITTLE NICKY and MR. DEEDS.  To be produced by Sandler’s Happy Madison company, Deadline Hollywood reports that it is already slated for a Spring Break 2014 release.

SETH MACFARLANE COUNTS ‘ TO DIE IN THE WEST’! 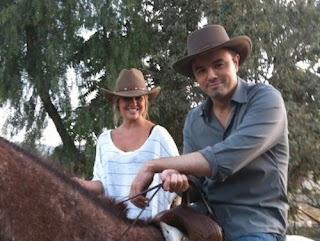 Deadline reports that Universal has the current high-bid in the auction to make , Seth MacFarlane's Western comedy, which currently boasts a cast including McFarlane, Amanda Seyfried and Charlize Theron. It's described as a kindred spirit to BLAZING SADDLES. 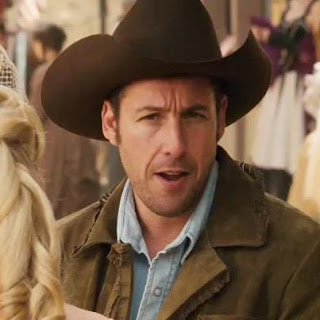 In a stunning reversal that left western aficionados and comedy fans breathing a collective sigh of relief, Adam Sandler has announced that he will not make RIDICULOUS 6 his next big-screen outing, but will instead make a ‘blended family’ comedy at Warner Brothers.  Sandler, who earlier this week won the coveted Razzy Award for his performance in THAT’S MY BOY – that’s his second straight ‘win’ after last year’s JACK AND JILL –  didn’t say whether Seth MacFarlane’s announcement had anything to do with his decision. 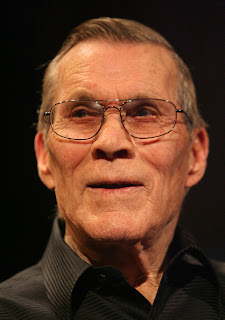 Tonight’s Academy Awards were shared among an unusually wide number of films, the result of a year with so many exceptional films.  The highlights for Western fans?  DJANGO UNCHAINED won Best Original Screenplay -- Quentin Tarantino, and Best Supporting Actor  --  Christoph Waltz.  won Best Actor – Daniel Day-Lewis, and Best Production Design – Rick Carter and Jim Erickson.  Also of particular delight to Western fans, stunt man and stunt coordinator Hal Needham was presented with an honorary Oscar for a splendid career.  As writer C. Courtney Joyner noted on Facebook, “In a way, it meant that Andy McLaglen, Burt Kennedy, Henry Hathaway, Gordon Douglas, John Stugess and Peckinpah were all at tonight's ceremony, thanks to Hal.” 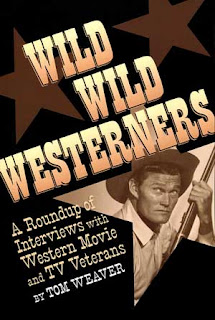 If you’re read Western Clippings by Boyd Magers – and if you haven’t, you definitely should – you’ve read the work of Tom Weaver, who has an interview in nearly every issue.   Tom has cherry-picked some of his best for THE WILD WILD WESTERNERS, which comes from Bear Manor Media, is about 200 pages, and sells for $18.95.

It’s a highly entertaining and informative collection, focusing and big-screen and small, big-budget and tiny, oaters, with a very eclectic selection of story-tellers.  Some of the speakers are famous – a long interview with Fess Parker for example.  Others are well-known to Western buffs – Andrew J. Fenady talking about the making of THE REBEL, and Ed Faulkner discussing his John Wayne-related career.

Mostly these are not ‘career interviews’, but ones that focus on a particular series or movie or personality, and are highly revealing, and full of unexpected details.  Robert Clarke talks about the James Warren and Tim Holt pictures he did at RKO, and what wonderful western director Lesley Selander was famous for – Paul Wurtzel remembers him for the same thing.  Robert Colbert remembers acting in the Warner Brothers TV Westerns, going from to BRONCO to MAVERICK, and how Warners made him a 3rd Maverick brother when James Garner threatened to walk.  His story of how WB handled a WGA strike alone is worth the price of the book!

Gary Clarke shares how he got himself dropped from THE VIRGINIAN.   June Lockhart, who never starred in a western series, discusses the many guest appearances she made.  Among my favorites is UNTOUCHABLE Paul Picerni’s memories of making THE SCALPHUNTERS with Burt Lancaster and Telly Savalas.  His memories of Shelly Winters are worth twice the price of the book!  And actress Ann Robinson’s memories of stunt doubling for Shelly couldn’t be more different.   And who knew Ann Robinson started out doing horse stunts?

Not all of the stories come from actors.  Make-up artist Kenneth Chase discuses doing Ross Martin’s disguises on WILD, WILD WEST.  Cinematographer Richard Kline remembers when, as an assistant cameraman, he worked with Charlie Starrett on the DURANGO KID films.  Pat Fielder describes writing THE RIFLEMAN.  Paul Wurtzel recalls in the late 1950s, working as assistant director on the Bel-Air westerns, produced on a tight budget in by Howard W. Koch and Aubrey Schenck.

WILD WILD WESTERNS is a fascinating collection of reminiscences, with plenty of fun for fans of all the sub-genres of American Westerns.  Weaver is never intrusive, always letting his subjects tell their stories.  And unlike so many books of interviews, it has an index, so you can quickly find those Chuck Connors or Lon Chaney Jr. stories you want to read to your wife.  Strongly recommended.

That's all for this week's Round-up!   On Saturday, March 9th, the Hallmark Movie Channel will premiere OUR WILD HEARTS -- if you remember reading about it in the Round-up as just WILD HEARTS, you remember correctly: they've changed the title.  I hope to have an interview with its star and director Ricky Schroder in next week's Round-up.