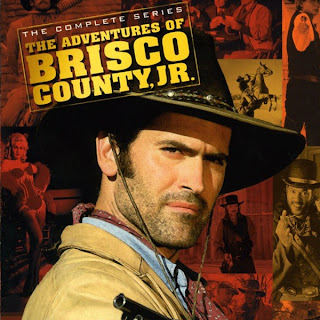 Back in December I was relieved to report that HELL ON WHEELS, whose 3rd season was put on hold until a qualified show-runner could be found, was now merrily chugging down the track under the able hands of exec producer and show-runner John Wirth, who has previously performed similar duties on PICKET FENCES, FALLEN SKIES, TERMINATOR: THE SARAH CONNOR CHRONICLES, and several other series. Most heartening of all, back in 1993 he was a writer and producer on THE ADVENTURES OF BRISCO COUNTY JR.  It was one of the few memorable Western efforts of the 1990s, which featured a wonderful line-up of genre-beloved guest stars, in addition to Bruce Campbell in the title role.

This week I reported on the Round-up Facebook page that according to Deadline: , NBC had ordered a Western pilot entitled ‘6TH GUN’.  Based on the Oni Press graphic novel, it’s another supernatural Western, this one about six mythical, mystical guns.  It’s scripted by Ryan Condal, whose HERCULES: THE THRACIAN WARS, to star Dwayne ‘The Rock’ Johnson, is in pre-production.  Producer is Carlton Cuse, who has two others shows coming up: BATES MOTEL for A&E and the FX pilot The Strain, in collaboration with Guillermo Del Toro.  I was contacted by Round-up reader Col. Kurtz, who informed me that Cuse had produced LOST, and was also one of the creators of THE ADVENTURES OF BRISCO COUNTY JR.  In fact, Cuse created the show with Jeffrey Boam, wrote fourteen episodes and exec produced all 27 episodes.   Nice to have two shows to look forward to!  I hope we see Bruce Campbell turn up in both!

‘CODY!’ DETAILS THE LIFE OF HERO IN ONE-MAN SHOW 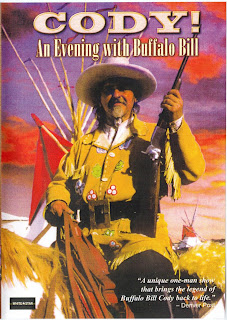 There are few icons of the Old West more controversial that William F. “Buffalo Bill” Cody.  The Pony Express rider, Indian fighter, buffalo hunter, scout and showman has been worshiped and reviled since he first gained fame.  Playwright and historian Eric Sorg has crafted a historically accurate single-character play that reveals many aspects of Cody’s life, some of them eye-opening and amusing, but not all of them attractive, and some quite tragic. 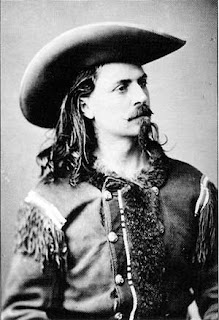 The real Buffalo Bill Cody
If there is one role Peter Sherayko was born to play, it’s Buffalo Bill Cody, and Peter covers the range of Cody’s moods, from the cheerfully cocky, to arrogant, wistful, and heartbroken.  The details of how buffalo were hunted, the encounters with unfriendly Indians, the story of how Cody came to be the subject of dime novels, are revealing and entertaining.  The details of his personal life are humanizing.  The downward personal and financial spiral of Cody’s life was, to me, unexpected and moving.  This is not a whitewashing of Cody, nor is it a hatchet job.  He talks easily of the best way to kill Indians, and later, his friendship with them.   And he talks much about his relationships with other legends of the west, notably Bill Hickock, as well Ned Buntline, Sitting Bull and Yellow hand.  Amusingly, he talks about one of Cody’s stage co-stars in his first theatrical appearance, Texas Jack Vermillion, whom Sherayko portrayed in the movie . 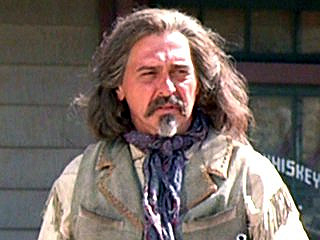 Peter Sherayko in TOMBSTONE
Sherayko has performed the play in ; ; ; ; ; in Sheridan and , ; at the Autry; and at the Karl May Festival in .  This filmed performance was done on a stage splendidly decorated with historical artifacts, without an audience.  Shot largely in a medium shot, there are a very few cutaways to a high-angle shot, and hardly any editing; it’s nearly a one-take, unbroken performance.  Faded in from time to time is historical footage of Cody himself performing in his Wild West Show.  The original stage production was directed by Ted Lange.  This filmed version is directed by Josh Seat, with music by Jon Butcher.  It’s available for $20 dollars from Peter’s company, CARAVAN WEST, HERE.

If the Round-up seems a bit briefer than usual today, I’ve got a good excuse.  Fellow screenwriter and western historian C. Courtney Joyner and I spent the day doing audio commentary for the Blu-Ray release of THE GRAND DUEL, the Lee Van Cleef spaghetti western from 1972, which BLUE UNDERGROUND is releasing.  It was a lot of fun, but it takes a lot of preparation.  They’ve done a beautiful restoration on it – I’ll have more information as the release date nears.