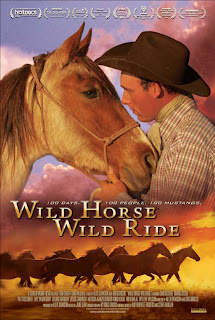 WILD HORSE, WILD RIDE, directed by Alex Dawson and Greg Gricus, is a documentary about kindness and decency.  I hope that doesn’t sound too sappy, because the movie isn’t at all.  Thousands of wild horses run loose on government land, and every year, thousands are rounded up and removed.  They all need homes and, as it says in the film’s introduction, “None has ever been touched by a human hand.”

The Mustang Heritage Foundation, whose mission is to facilitate and encourage wild horse adoption, sponsors an annual event called the Extreme Mustang Makeover Challenge, in which one-hundred people get one wild mustang, and one-hundred days to train it for a competition in Fort Worth, Texas.  The hope is that, the more tame the horse, the better the home it will find when it’s auctioned after the competition.

The movie focuses on nine individuals who take part, and they are an impressively mixed bunch.  There are experienced trainers who have done this before, and a biomedical engineer who has never trained a horse.  There’s the stunning blonde rodeo cowgirl.  And there are cowboys, from a pair of 20-ish brothers in , to a Mexican immigrant in , to a Navajo father and son from the res, to an ageing cowpoke taking part along with his seventh bride.

Although there is an explicit ticking clock, the underlying theme of the film is patience, as each rider gentles and trains their animal, and the filmmakers, allowing their film the same tone as their theme, eschew rapid cutting and fast music to instead show the same calm and patience as the trainers.  There are many quiet moments in the movie, which are no less exciting for their lack of drum-beat.

The methods of the trainers are as different as their backgrounds.  Some are on the horses quickly; others ride for the first time just days before the competition.  Some train the horses blindfolded; some work from the center of the corral; some work the new animals side-by-side with a trained animal.   Though all that take part do so out of compassion, there are additional motives as well.  The older men in particular have a need to prove something to themselves.  These are all people of no great wealth who give selflessly of their time.  There is a respect and love that develops between human and horse during the process, even between the most cantankerous participants.  And there is sadness, and sometimes tears, with the realization that, the better the job they do, the less likely the trainer will be able to afford that horse at auction. 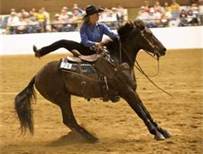 WILD HORSE, WILD RIDE is a beautiful, inspiring film which opened theatrically on Friday, August 24th.  To learn more, and to find out when it will be at a theatre near you, go HERE.  If you're in the L.A. area, the film will screen on Tuesday, September 6th at the Autry, at 6 pm.

And if you are inspired to take part in next year’s competition, here is who you should contact:


For information about adopting a wild horse or burro: 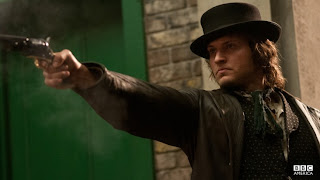 
On Sunday nights, while you’re enjoying season 2 of the post-Civil War Western series HELL ON WHEELS, you might find it worth your while to check out the new Eastern set in the same period on the opposite coast, COPPER.  The first original dramatic series to be produced by BBC-America, it premiered last Sunday, August 19th, with a strong opener to its ten-episode season.  Set in ’s infamous Five Corners District, the tale is as compelling as it is relentlessly grim.  Examining a world most viewers were introduced to in Martin Scorsese’s erratic film based on the brilliant history, GANGS OF NEW YORK, by Herbert Asbury, the story follows a Civil War hero and transplanted Irish cop, Detective Kevin Corcoran (Tom Weston-Jones), as he tries to see justice done on New York’s meanest streets and alleyways. 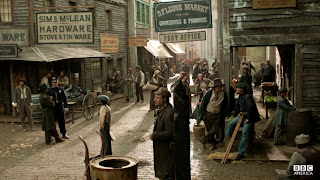 
No saint himself, we meet him when he and the other cops he works with ambush and slaughter a pack of bank-robbers, then gleefully pocket the loot until more disciplined police arrive.   Corcoran has an in-depth knowledge of the dregs of , but a connection with high society as well, through fellow war-vet and wealthy dilettante Robert Morehouse (Kyle Schmid).  He works overtly with Det. Francis McGuire (Kevin Ryan), and covertly with Dr. Matthew Freeman (Ato Essandoh).  Freeman is a black m.d., and while Corcoran turns to him for his forensic expertise, he must present the findings as his own, knowing a black doctor’s evidence would never be taken seriously by N.Y.P.D. of the time.  He is also a friend to various scarlet women, among them Madam Eva Heissen (Franka Potente). 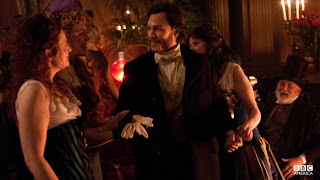 
Corcoran comes with a personal axe to grind – he’s investigating the death of his wife and child (and if it sounds a bit like HELL ON WHEELS on that score, HELL ON WHEELS sounds a bit like OUTLAW JOSIE WALES).  And he’s got a case he’s drawn into – the appearance and disappearance of a street-urchin prostitute.  This is a story of corruption and evil, and I’d not recommend it for the kiddies, but for grown-ups who like their heroes tough, and their villains despicable, you can’t very easily top a necro-pedophile. 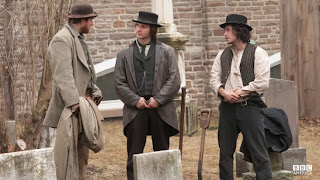 
Lensed in dank, shadowy , the show is created and written by a sterling trio of scribes: Tom Fontana, Will Rokos, and Barry Levinson.  It is grim, grueling fun, and gives a convincing and involving glimpse at one of the most tragic times in our greatest city.


Thus Anthony LaPaglia left his small, much-postponed role in the Tarantino film to honor his commitment to UNDERGROUND, a film about Wikileaks founder Julian Assange, which had been financed based on LaPaglia playing the lead.  LaPaglia joins a slew of actors who were cast in DJANGO UNCHAINED, then walked, including Joseph Gordon-Leavitt, who was to play LaPaglia’s brother; Kevin Costner; Kurt Russell; Sacha Baron Cohen; and Jonah Hill, who agreed, then left, then returned as another character.


While LaPaglia says he had a good time on the DJANGO set, hanging around and waiting to work, he said the production, “…was just out of control, over-budget, it was everywhere.” 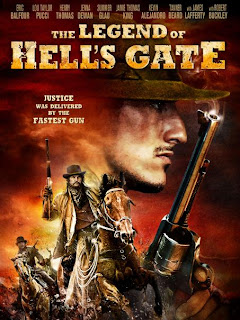 If you plan to rent LEGEND OF HELL’S GATE – and you certainly should – and I don’t say that just because Henry’s Western Round-Up is quoted on the box – there’s a quick and easy way to locate a copy near you.  The good folks at Redbox contacted me and said that if you go here --  http://www.redbox.com/movies/the-legend-of-hells-gate-of-hells-gate -- and type in your zip code, ect to the commitment I'd made.''

Thus Anthony LaPaglia left his small, much postponed role in the Tarantino film to honor his commitment to UNDERGROUND, a film about Wikileaks founder Julian Assange, which had been financed based on LaPaglia’s playing the lead. LaPaglia joins a slew of actors who were cast in DJANGO UNCHAINED, then walked, including Joseph Gordon Leavitt, who was to play LaPaglia’s brother; Kevin Costner; Kurt Russell; Sacha Baron Cohen; and Jonah Hill, who agreed, then left, then came back as another character.

While he had a good time on the set of DJANGO UNCHAINED, waiting to work, he said the production, “… was just out of control, over-budget, it was everywhere.”they’ll do the rest.  I tried it, and found ten copies from half a mile to 3 ½ miles from my home.  (If you’d like to read my review, go HERE.)

The general link to search for movies is this: http://www.redbox.com/locations?loc=91401&productRef=5497I


I tried it for another fine recent western, GOOD FOR NOTHING, and found six copies available in my neighborhood.  It’s a pretty handy tool! (The link to my review of GOOD FOR NOTHING is HERE.)

‘WILD BOYS’ – AUSSIE WESTERN SERIES IS WELL WORTH A LOOK!


As long as we’re being big-hearted and including Easterns like COPPER in the Round-up, let’s take it a little farther, and check out a ‘western’ set in and shot in Australia’s New South Wales, WILD BOYS.  The official synopsis for the series is: 1860s, Wild Boys follows a gang of bushrangers as they stage hold-ups determined to keep ahead of the troopers or wind up at the end of a noose.


There were ten episodes in 2011, and it appears that there is a second season, which has its finale tonight, but I’m not sure, and none of the videos posted on the official site will run in the   But the trailer is below, and I’ll be finding out more this week.


SATURDAY NOON MATINEE AT THE AUTRY

As they do on the first Saturday of every month, the Autry presents a free double-feature of Gene's movies.  This coming Saturday, September 1st, it's YODELIN' KID FROM PINE RIDGE (Republic 1937) and LAST OF THE PONY RIDERS (Columbia 1953).  The latter deals with the Pony Express being supplanted by the stagecoach business, and features a fine performance by Dick Jones.

That’s it for today’s Round-up!  Don’t forget to catch episode three of the second season of HELL ON WHEELS tonight on AMC.  Next week I’ll have, among other things, and interview with HEATHENS AND THIEVES co-director John Douglas Sinclair.

Have a great Labor Day Weekend!