Next Saturday, July 28th is the 8th National Day Of the Cowboy, and and are the first two states to recognize the day in perpetuity.  Other states celebrating this year include , , , , , , , and .  A visit to the official NDOC calendar page HERE will give you a community by community listing.  There are parades, rodeos, historical demonstrations and displays, shooting competitions, musical performances, arts and crafts for kids, and much more. Some of these are one day events, and others are for several days, so check your local area, and don’t miss out!  Events are planned in Spearfish, South Dakota; Cumberland, Virginia; Dubois, Wyoming; Sedona, Arizona; Redlands, California; The Cowboy Hall of Fame in Medora, North Dakota; Sullivan, Missouri; Slipoff Hollow, Alabama; Flagstaff, Arizona; Dalton, New Hampshire; Sacramento, California; Vernon, Texas; Altus, Oklahoma; Jefferson, Texas; Amarillo, Texas; The Autry Museum in Los Angeles, California; Kissimmee, Florida; Madera & Porterville, California; Santa Clarita, California; El Paso, Texas; Norco, California; Malta, Illinois; Mesquite, Texas; Grapevine, Texas; and Crockett, Texas.

Of particular interest, is celebrating with their CRAZY DAYS, Friday the 27th and Saturday the 28th.  In addition to the NDOC, the 28th also marks the 40th Anniversary of the 1972 film THE COWBOYS, directed by Mark Rydell and written by Irving Ravetch, Harriet Frank Jr. and William Dale Jennings, from ’ novel.  In it, (as many of you recall) John Wayne hires a string of school-boys to drive his herd to Belle Fourche – and it’s the only major Western that mentions Belle Fourche, for years one of the nation’s largest livestock shipping points.  There’ll be a screening, and several cast members will attend, including Nicolas Beauvy, who played Dan; Al Barker Jr., who played Fats; Stephen Hudis, who played Charlie Schwartz; and Sean Kelly, who played Stuttering Bob.  Incidentally, my interview with Nicolas Beauvy about the making of THE COWBOYS will be coming soon to the Round-up.

The Autry’s full day of events will feature live music, square-dancing, roping and gun-spinning demonstrations, arts and crafts, an Olde Time photo-studio, a scavenger hunt, a chance to rope a cow, and screenings of episodes of THE GENE AUTRY SHOW.

Western writer J.R. Sanders, of , , working with the Barnes & Noble is , last year started READ ‘EM, COWBOY, a program to introduce youngins to Western writing, and it’s spread like a prairie-fire!  There are several Read ‘Em Cowboy events in California, five in Texas, and one each in South Dakota, Wyoming and Colorado, most or all featuring readings and book-signings by Western authors of fiction and non-fiction.  And no matter where you are, you can take part by printing out and using the voucher below, at a Barnes & Noble store or at their on-line site.  A part of each purchase will go to your local school or worthy organization. 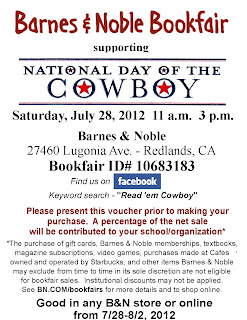 The Will James Society, named for the Western author of such beloved novels as SMOKEY and SAND and LONE COWBOY, will present four sets of his books to Read ‘Em Cowboy ramrods J.R. Sanders, Francie Ganje,  Liz Lawless, and Julie Ream, who will present them to their local libraries.  Julie Ream’s Read ‘Em Cowboy event at the Barnes & Noble in Santa Clarita will feature authors Peter Sherayko (TOMBSTONE: THE GUNS AND GEAR) and Peter Ford (GLENN FORD: A LIFE) as well as displays of a Nudie-customized car and a trailer he made for Roy Rogers, and a baby-animal petting zoo from the Iverson Ranch.

Incidentally, J.R. has a full week of events planned, starting today with the 50th Anniversary screening of THE MAN WHO SHOT LIBERTY VALANCE at the beautiful Fox Theatre in .  And he asked me to highlight the Under the Cowboy Moon: An evening with Belinda Gail and Dave Stamey.  “It's a fundraiser for 's historical mural project.  The school was built in 1891; the mural will feature the original buildings, sadly long gone.”  It’s on Friday, July 27th: at Clock Auditorium, - 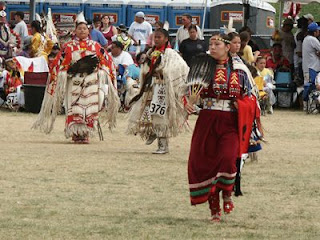 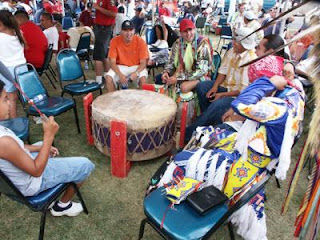 From Friday, July 20th, through Sunday, July 22nd, the hosted one of the largest Powwows in the area, which is a short drive from .  There was music, drumming, dancing, food, venders, and a wide range of artwork.  There was even a live radio broadcast on Saturday night, from 4 to 8 pm on KYRS.  A great time was had by all, and many commented on what fine hosts the were. 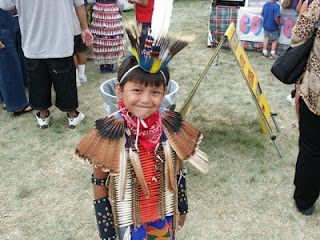 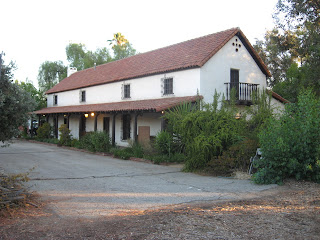 On Thursday night, June 28th, The San Fernando Valley Historical Society had a special Adobe Under The Stars evening featuring a tour of the Andres Pico Adobe, displays of several personal collections, and a screening of Roy Rogers and Dale Evans in one of their charming Republics musical actioners, . 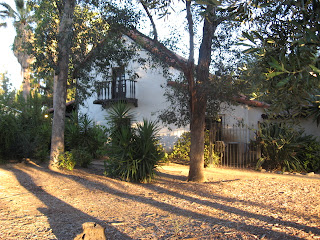 The Adobe is in the at Hills.  It was my first visit to the Adobe, the 2nd oldest standing building in .  Built in 1845, it was the home of Andres Pico, who needed more space for his cattle, and had taken a nine-year lease on the entire San Fernando Valley – it probably helped that his brother, Pio Pico, was the Governor, in fact the last Mexican Governor of California.  The adobe contains a beautifully furnished living room, dining room and, upstairs a bedroom and research library and exhibit hall. 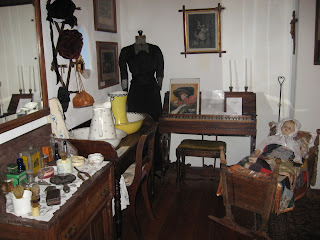 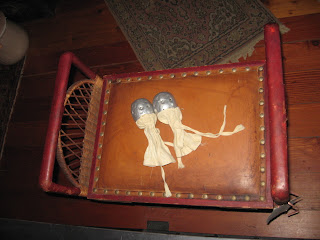 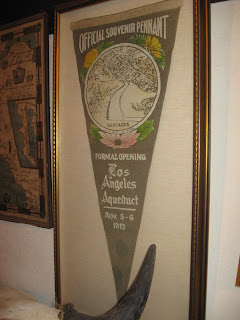 Pennant from L.A. Aqueduct opening ("Forget it, Jake.  It's Chinatown.")

Just outside the adobe is the Lankershim Reading Room, an octagonal building built from a kit in 1904.  The Lankershims were one of the early ‘land’ families of , and this structure is perhaps the only one left from their once-vast holdings.  Back in 2001 it was about to be demolished when SFVHS veep James Gulbranson drove by, saw what was about to happen, and crammed his truck between the structure and the bulldozer.  The SFVHS bought it, moved it and restored it. 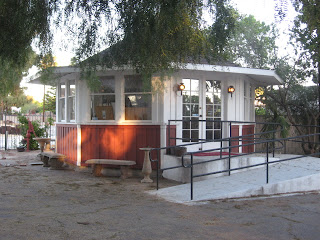 Not nearly so grand, but interesting, is the 5’ X 8’ Southern Pacific Railroad flagman’s shanty, once a common sight, and now one of the last known.  The SFVHS also is preserving the , the burial place of over 600 between 1889 and 1939, which had fallen into disrepair, and was the victim of disgraceful vandalism over the past few decades. 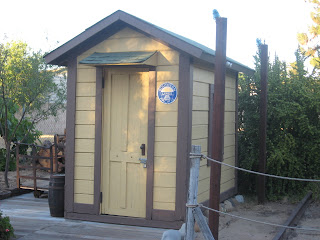 Among the interesting displays that night were John Brooks’ percussion pistol collection; grandfather Peter Fontanili and grandson Shawn Garrison’s collection of Civil War weapons and tintypes; Pat Coscia’s collection of toy horses; and Mrs. Fontanili’s collection of quilts.  There were also several classic cars.  Fresh popcorn was provided for the screening, which was particularly enjoyable because the event attracted an older crowd, which meant that no one talked, no one texted, and no one’s cell phone went off during the movie. 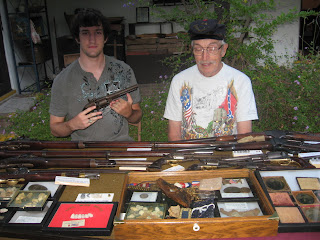 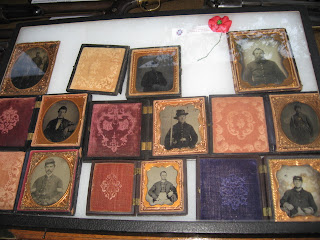 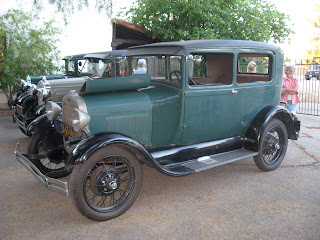 
The hugely successful East Coast festival from earlier this summer has moved west, and will screen from Thursday, July 26th through Sunday, August 12th, mostly at the Egyptian in Hollywood, but with some programs at the Aero in Santa Monica.  Included are

In a state famous for world-class fiscal incompetence, it was upsetting to see a list of seventy public parks scheduled for closure due to lack of money, among them parks of great Western historical importance like Los Encinos, , and Will Rogers.  Upsetting, but not surprising in a state that plays ‘chicken’ with its citizens year after year.  Last month it was announced that most of those parks would not be closed after all!  Big sigh of relief!

Then last week, the story broke that one Manuel Thomas Lopez, a high-ranking deputy director in Parks and Rec., had without authorization started a vacation buy-back program, where employees would be paid for unused vacation time, with fraudulent work-hours entered on the books.  Not surprisingly, he got over $20,000 for himself.  He’s been allowed to resign.  Then, on Friday, July 20th, Ruth Coleman, director of the Department of Parks and Recreation, resigned, and chief deputy Michael Harris was fired, when it was learned that, while their department was crying poor, they had $54 million dollars in surplus money (what the Hell is surplus money?) that they’ve been hiding for a dozen years!  Resignings and firings are nice, but when do the prosecutions start?