Los Angeles, Italia, the annual celebration of Italian film and culture, will include several tribute screenings to the great Spaghetti Western director Sergio Corbucci. The event will be held from Sunday, February 19th through Saturday the 25th, in Hollywood, at the Chinese 6 Theatre. 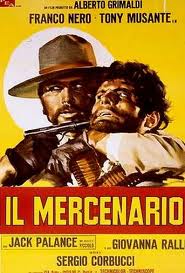 The festival opens on Sunday at 11:00 a.m. with a documentary about Sophia Loren, BECOMING SOPHIA, and will be followed by a 12:30 p.m. screening of Corbucci’s THE MERCENARY (1968), starring Franco Nero, Jack Palance and Tony Musante, with music by Ennio Morricione and Bruno Nicolai.

On Sunday night, at 10:15 p.m., Corbucci’s DJANGO (1966) will be screened, starring Franco Nero, Jose Bodalo and Loredana Nusciak, featuring the wonderful score by Luis Bacalov -- and Franco Nero will attend! 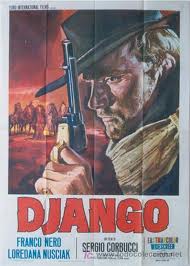 On Monday, at 6:30 p.m., in memory of actor Francesco Quinn, the short film THE TONTO WOMAN will be screened. 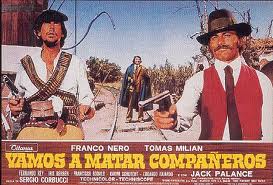 This event is FREE, and all seats are given out on a first-come, first-seated basis. You are asked to RSVP by email for the screenings with personal appearances. For more details, go HERE.

And for fans of stylish horror, director Dario Argento will be attending, and there will be numerous screenings of his films, including SUSPIRIA, DEEP RED, THE STENDHAL SYNDROME, CAT O’ NINE TAILS, and a 25 minute preview of his current production, DRACULA 3D.


THEN THERE'S THAT OTHER SERGIO... 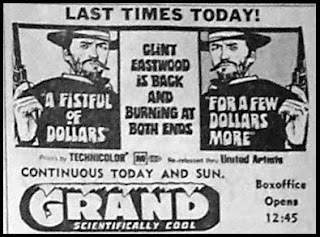 
TV WESTERNS ALL OVER THE DIAL!

More and more, classic TV Westerns are available all over the TV universe, but they tend to be on small networks that are easy to miss. Of course, ENCORE WESTERNS is the best continuous source of such programming, and has been for years. Currently they run LAWMAN, WAGON TRAIN, HAVE GUN WILL TRAVEL, , RAWHIDE, GUNSMOKEandMARSHALL DILLON, which is the syndication title for the original half-hour GUNSMOKE.Incidentally, I see on Facebook that a lot of watchers are mad as Hell at losing and THE VIRGINIAN.


RFD-TV is currently showing THE ROY ROGERS SHOW, first at 9:30 a.m. Sunday, Pacific Time, then repeated several times a week.They show a feature every Tuesday as well, with repeats -- check your local listings.


INSP-TVshows THE BIG VALLEY Monday through Saturday, LITTLE HOUSE ON THE PRAIRIE seven days a week, DR. QUINN: MEDICINE WOMAN on weekdays, and BONANZA on Saturdays.


TVLANDhas dropped GUNSMOKE after all these years, but still shows four episodes ofBONANZA every weekday.


GEB is largely a religious-programming cable outlet that runs at least one Western on Saturdays – the ones I’ve caught have been public domain Roy Rogers and John Wayne pictures –and sometimes have weekday afternoon movies as well.


For those of you who watch TV with an antenna, there are at least a couple of channels that exist between the standard numbers – largely unavailable on cable or satellite systems – that provide Western fare. ANTENNA TVis currently running RIN TIN TIN, CIRCUS BOY, HERE COME THE BRIDES, andIRON HORSE.


Another‘in between’ outfit, ME-TV, which stands for Memorable Entertainment TV, runs a wide collection: BIG VALLEY, BONANZA, BRANDED, DANIEL BOONE, GUNS OF WILL SONNETT, GUNSMOKE, MARSHALL DILLON,RAWHIDE, THE RIFLEMAN, and WILD WILD WEST.Some of these channels are hard to track down, but if they show what you’ve been missing, it’s worth the search.


And for those of you on the other side of the pond, our British correspondentNilton Hargrave tells me CBS ACTION has begun showing GUNSMOKE.


Well, I've got my computer back from the shop, so the Round-up may be 48 hours later than I'd planned, but at least it's posted.  I had a couple of other stories I was going to include, but I didn't want to put this off another day, so I'll add those stories to next week's Round-up!

Happy Trails 'til then!