‘THE FRONTIER’ -- A THIRD WESTERN IN DEVELOPMENT AT NBC

In addition to RECONSTRUCTION and the as-yet untitled western script from Pete Berg and Liz Heldens, of FRIDAY NIGHT LIGHTS fame (for details on RECONSTRUCTION, go HERE ), NBC has asked COLD CASE exec producer Shaun Cassidy to write the pilot for THE FRONTIER, an 1840s-set Western to be directed by Thomas Schlamme.   It will detail the adventures of a group heading west from . 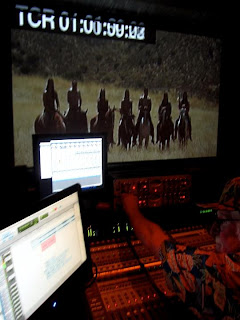 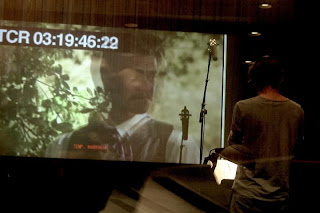 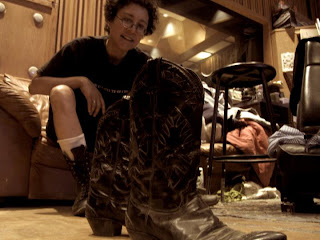 (Foley artist Lorita de la Cerna; her job is to record live sound effects -- in this case boot-shod footsteps -- in synch with the picture)

Co-producer, co-author and star Lenore Andriel tells me the post work, being performed at Monkeyland Audio, is going swimmingly.  “We've been fortunate to be able to have all the actors come in for the ADR (looping). This is not always easy – they’re usually working on other projects, but luckily, we walked ‘between the raindrops’ on this one.  We should be done with ADR by the end of next week, and have the film completed by mid-October! This should co-ordinate nicely with all the film festivals that are happening in the fall, especially in November with the Native Festivals, i.e. Red Nation, and the AFM in Santa Monica.”

Okay, a little more cast.  The modern-day Westerner starring ex-Governator Schwarzenegger will now include Swedish actor Peter Stormare, who has  been seen in FARGO and ARMAGEDDON among many others.  Screenplay is by Andrew Knauer, Jeffrey Nachmanoff and George Nolfi.  Korean director Jee-woon Kim directed the wonderfully exuberant THE GOOD, THE BAD & THE WEIRD.

SPECIAL ‘’ SCREENING PACKS ‘EM IN AT THE AUTRY

The Saturday, September 17th screening of (1993) was the best-attended entry thus-far in the Autry’s ‘What Is A Western?’ series.  Hosted by Curator Jeffrey Richardson, the event included a discussion with Michael F. Blake, author of HOLLYWOOD AND THE O.K. CORRAL: PORTRAYALS OF THE GUNFIGHT AND WYATT EARP, who opined that one of the reasons for the tremendous following for TOMBSTONE is the portrayal of the friendship between Wyatt Earp and Doc Holliday: we all wish we could have a friendship like that. 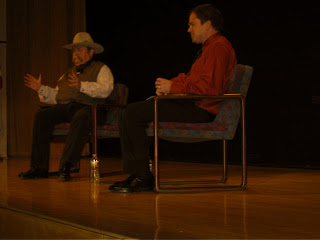 A surprise bonus was the presence of Joseph A. Porro, ’s costume designer.  Porro, who designed costumes for DAY, NOON and many others, confirmed that, while for most Westerns, costume design is all about a visit to Western Costume to go through the racks, he had a unique problem: the costumers for WYATT EARP (the Costner/Kasdan version) and GERONIMO had gotten there ahead of him and wiped the place out!  He travelled to Italy for some of the clothes, but most had to be made from scratch – and the striking individual character of the wardrobe makes it clear that this was all to the good. 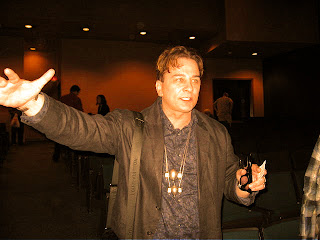 A personal observation here; I’d seen TOMBSTONE two or three times before, though never on a screen, and while I thought it was very good, I frankly never understood its fanatical following.  Now that I’ve seen it on the big screen, I ‘get’ it.  Some movies truly need a huge image to unleash their power, Westerns especially.

The ‘What Is A Western?’ series, all with 35mm prints, continues October 22nd with Anthony Mann’s brilliant WINCHESTER ’73 (1950) starring James Stewart; November 12th with Clint Eastwood’s western-directing apex, UNFORGIVEN (1992) -- although I wish he’d called it something else, as it’s sort of marginalized John Huston’s equally fine but unrelated THE UNFORGIVEN (1960).  There’s no entry for December, but next year’s entries will include THE PROFESSIONALS, THE WILD BUNCH, MY DARLING CLEMENTINE (for even more O.K. Corral fun), BUTCH CASSIDY AND THE SUNDANCE KID and THE GUNFIGHTER. 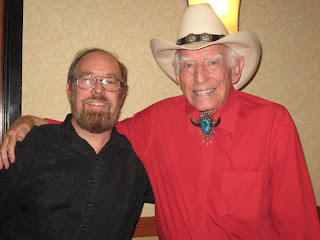 Morgan Woodward, the movie and TV villain par excellence who gained fame – and started the vogue for mirrored sunglasses -- with his role in COOL HAND LUKE celebrated his 86th birthday Friday, September 16th, at BONANZACON2011 at the Burbank Marriott – and I’ll have more about that event in next week’s Round-up.   First garnering attention portraying Shotgun Gibbs opposite Hugh O’Brien on the WYATT EARP series, Morgan appeared in every western and non-western series you can think of, notably eight times on BONANZA, a dozen times on WAGON TRAIN, and a record nineteen times on GUNSMOKE – and was killed by Matt Dillon more often than any other actor.  I’m proud to say that he also starred opposite Joe Don Baker in the first movie I wrote, SPEEDTRAP.

If you’ve got a hankerin’ to tell a Western yarn, you might want to submit it to the Rope and Wire contest HERE.
The entry fee is $15, and the first place winner gets $10 from each entry.  Scott tells me, “Last year we had 25 entries. The top prize was $250. We expect to do better this year.”  If you’d like to read last years’ winners, go HERE.  (note: you have to scroll a long way down)

TCM ON THE OTHER SIDE OF THE POND

Just heard from Davy Turner in that their programming on Turner Classics is very different from our in the States: “They’re showing the old western series I grew up watching, currently MAVERICK and GUNSMOKE.  RAWHIDE (my fave as a Clint fan) and BONANZA were shown last year.  They emailed me after I wrote to thank them, that HIGH CHAPARRAL will be next, in early October.  Look forward to watching Uncle Buck and Manolito ridin’ the trails again.”

FORD’S ‘ TOGETHER’ AT LACMA TUESDAY 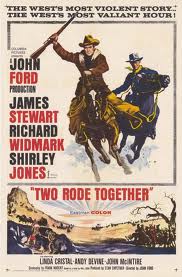 On Tuesday, September 20th, at 1 p.m., the Los Angeles County Museum of Art will show John Ford’s TWO ROAD TOGETHER, starring James Stewart and Richard Widmark, script by Frank S. Nugent from a novel by Will Cook.  It tells the story of a couple of tough characters bringing a group of settlers home from years of Comanche captivity.


TCM FANATIC - WESTERN NOW ONLINE!And speaking of TCM, have I mentioned that the segment I was interviewed for is now viewable here?

That's it for today, folks!  Next week I'll have details on BONANZACON, a review of BLACKTHORN, and a review of the book AND...ACTION!