WHO IS THAT MASKED MAN? 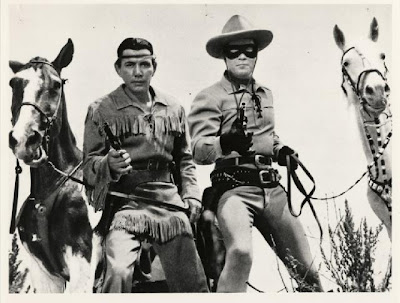 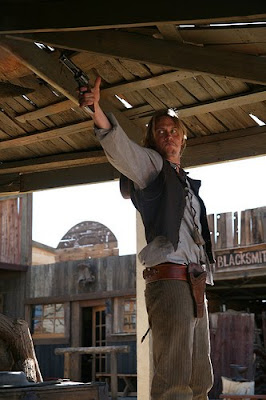 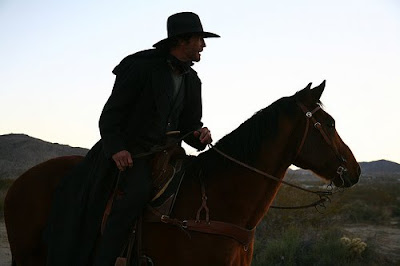 IT MAY BE GEORGE CLOONEY. Jerry Bruckheimer is in the pre-production stages for a LONE RANGER feature that has recently seen a change of screenwriters (CLICK HERE for that entry). And although Johnny Depp was announced as Tonto some time ago, the project has been lacking a Kemo Sabe. But according to EXTRA, George Clooney is now in the lead for the lead. When EXTRA tried to confirm with Bruckheimer, he replied, "It's true that Johnny Depp is going to play Tonto. As far as George is concerned, we have not made a decision on the Lone Ranger yet. He's a fantastic actor!" Bruckheimer states. "Who wouldn't consider him. We are still working on the script. It depends on the age range, what we are going to do with it."

This new direct-to-home-video revenge drama from THE ASYLUM stars SAGE MEARS as the wronged woman, BARRY VAN DYKE(above) as the bounty hunter, GEOFF MEAD as the bounty, and GREG EVIGAN as the sheriff. In addition to being the villain of the piece, Mead also wrote the screenplay, and Southern Californians may recognize him from his days in the western stunt show at UNIVERSAL STUDIOS. Speaking of double-duty, Barry's son SHANE VAN DYKE (above right) directed the picture, and also plays a member of the outlaw gang. I'll have a review next week. To view the trailer, CLICK HERE.

Due in stores May 18th, this direct-to-home-video release is from the prolific writer-director FRED OLEN RAY, and toplines PETER FONDA as Marshal Kane, back in the saddle again after wearing the badge in 3:10 TO YUMA(2007). TIM ABELL is Frank, GEORGE STULTS, from 7th HEAVEN , is Jesse, and MICHAEL GAGLIO is Otis. To see the trailer, CLICK HERE

TOMBSTONE IN BLU-RAY ON APRIL 27TH

One of the most fervently-loved tellings of the O.K. Corral will be back with a $29.99 price on its head. Written by KEVIN JARRE, it was directed by the late GEORGE P. COSMATOS. Born in Italy in the midst of World War II, Cosmatos learned his craft assistant directing on European productions like EXODUS (1960) and ZORBA THE GREEK (1964). TOMBSTONE (1993), which stars Kurt Russell, Val Kilmer and a prairie schooner-full of stars, was Cosmatos's crowning achievment. CLICK HERE for the trailer.

TCM 9:00 p.m. THE SHOOTIST (1976) John Wayne's last movie role is one of his most emotionally affecting as a dying lawman surrounded by people who want to profit from his notoriety. It's a shame it's the only time Don Siegel directed him. Glendon Swarthout's novel is adapted beautifully by his son, Miles Swarthout. Starring Lauren Bacall, James Stewart, Ron Howard, Harry Morgan, Richard Boone and Hugh O'Brien.

TCM 11:00 p.m. STAGECOACH (1939) The movie that made the Duke a star, and rescued westerns from the kiddie matinee ghetto. Screenplay by frequent John Ford collabotator Dudley Nichols, from the short story STAGE TO LORDSBERG by Ernest Haycox. The story of a group of stagecoach travelers also stars Claire Trevor, George Bancroft, Andy Devine, Donald Meek and John Carradine. After Duke read the script, John Ford asked who he thought would be good for The Ringo Kid. "How about Lloyd Nolan?" Duke replied. Thank God Ford didn't listen!

TCM 8:30 A.M. NEVADA SMITH (1966) Steve McQueen stars as a 'half-breed' out to avenge his parents slaughter. Enthralling, and endlessly imitated, it is the great revenge western story, directed with consumate skill by Henry Hathaway. The story was a novel-within-a-novel, from Harold Robbins's THE CARPETBAGGERS, adapted by one of Hitchcock's favorite writers, John Michael Hayes. Also starring Karl Malden and Brian Keith.

TCM 10:45 a.m. The Reivers (1969) Charming, easy-going turn-of-the-century tale of Steve McQueen, Rupert Cross, and Mitch Vogel's adventures in a stolen car. Sharon Farrell is at her most radiant, and B-western fans will appreciate the cameo by Roy Barcroft as the judge. Written by the Oscar-winning wife and husband team of Harriet Frank Jr, and Irving Ravetch, from William Faulkner's novel. Directed by Mark Rydell.

TCM 3:30 a.m. AMBUSH (1949) Robert Taylor searches for a white woman held captive by Apaches. With John Hodiak and Arlene Dahl, directed by Sam Wood. The screenplay by Marguerite Roberts is based on a story by the great Luke Short.

FMC 11:00 a.m. THE UNDEFEATED (1969) D:Andrew V. McLaglen, W:James Lee Barrett, from a story by Stanley Hough. At the close of the Civil War, Confederate officer Rock Hudson leads a group of southern loyalists to Mexico and Emperor Maximillian -- unless John Wayne can stop him. Rock Hudson later described the movies as "crap." Ironic, considering it's one of his more convincing performances. With Ben Johnson and Harry Carey Jr.

FMC 1:00 p.m. Flaming Star (1960) An early film from the soon-to-be-great Don Siegal, working from Nunnally Johnson's script of a Clair Huffaker novel. Elvis Presley, playing a role planned for Marlon Brando, is the half-breed son of white John McIntire and Kiowa Dolores Del Rio, forced to take sides in a local war between white and Indian. Surprisingly good, you realize how good an actor Elvis could have been if Col. Parker hadn't steered him into mostly inane crap. With Steve Forrest and Barbara Eden.

TCM 1:30 p.m. JOHNNY GUITAR (1954) Nicholas Ray directed this crazily over-the-top story of Sterling Hayden as Johnny Guitar, and Scott Brady as The Dancin' Kid, brawling for the affections of the terrifying Joan Crawford. Adapted by Philip Yordan from the novel by Roy Chanslor.

FMC 3:00 p.m. THE MAN FROM SNOWY RIVER (1982) An Australian 'western' based on a poem by A. B. 'Banjo' Paterson, scripted by Cul Cullen, directed by George Miller. Stars Jack Thompson, Tom Burlinson, Kirk Douglas, and the lovely gal from the under-appreciated series, PARADISE, Sigrid Thornton.

FMC 3:00 a.m. The Big Trail (1930) Raoul Walsh directed John Wayne in his first lead in this epic from Hal G. Evarts' story, and good as it was, it was a box-office disappointment, sending the Duke to do leads in Bs until Stagecoach (1939). Beautiful telling of the story of a wagon train, with Marguerite Churchill, El Brendel, Ty Power Sr., with uncredited early roles by Ward Bond and Iron Eyes Cody. Shot in 35 MM by Lucien Andriot, and 70MM by Arthur Edeson -- I don't know which version they show.

AMC 6:30 a.m. BIG HAND FOR THE LITTLE LADY (1966) Joanne Woodward has to step into a high-stakes poker game when her husband is too ill to continue. With Henry Fonda and Jason Robards Jr. Directed by Fielder Cook, written by Sidney Carroll, originally as an episode of the tv series PLAYHOUSE 90. If you'd like to see that version, click here.

AMC 8:45 a.m. The Last Wagon (1956) Directed by the great historical filmmaker Delmer Daves, which he co-scripted with James Edward Grant. The wagin-train survivors of an Apache attack must turn to 'Commanche Todd' Richard Widmark for help. With Tommy 'Lassie' Rettig and Nick Adams.

TCM 9:00 a.m. TENSION AT TABLE ROCK (1956) A gunman takes over a stagecoach stop. Starring Richard Egan, Dorothy Malone and Angie Dickinson. The novel by Frank Gruber is adapted by Winston Miller. Directed by one of the great unsung talents of western films, John Marquis Warren, who was responsible for eraly, defining episodes of GUNSMOKE and RAWHIDE.

AMC 7:30 p.m.SILVERADO (1985) Larry Kasdan directs from a script he wrote with his brother Mark. Lots of good stuff in it, but at 133 minutes, it's at least a half hour too long. Starring Kevin Kline, Scott Glenn and Kevin Costner.

AMC 10:30 p.m. SILVERADO (1985) Larry Kasdan directs from a script he wrote with his brother Mark. Lots of good stuff in it, but at 133 minutes, it's at least a half hour too long. Starring Kevin Kline, Scott Glenn and Kevin Costner.

FMC 8:45 a.m. BROKEN ARROW (1950) James Stewart is an ex-soldier, and Jeff Chandler is Apache Chief Cochise, trying together for peace. D:Delmer Daves, W:Albert Maltz(another writer's name may be one the credits -- Maltz was blacklisted and had someone 'front' for him).