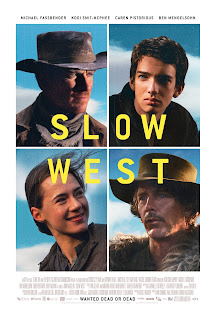 Anyone who has ever loved desperately and hopelessly will grudgingly admire, and see something of themselves, in sixteen-year-old Jay Cavendish (Kodi Smit-McPhee), a Scottish lad who follows his lady-love Rose Ross (Caren Pistorius) and her father (Rory McCann) across continents to Colorado to be with her.  The plot is as single-minded as the lad: he will let nothing stand in his way until they are reunited, or he dies in the attempt. 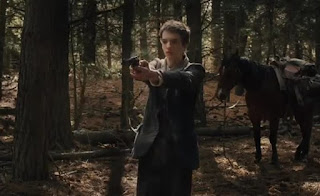 It is said that God takes care of children and fools, and that can be the only explanation of how Jay, who is both, is still breathing – not a fool in the low I.Q. sense, but in being oblivious to his inabilities as he makes his way through a beautiful but unforgiving land full of savage people.   To his great luck he meets Silas Selleck (Michael Fassbender), sometimes an outlaw, sometimes a bounty hunter who, for a price, takes the lad under his wing, to help in his romantic odyssey.

As they travel, Jay tells the at first disinterested Silas the story of himself and Rose – we see it in   flashbacks – and Silas grows to understand why Jay is so driven, why guilt is mixed with duty, and Silas begins to care.  Jay has no idea that Silas has his own agenda, and that is attempts to help Rose may put her at greater risk.  The chemistry between the outlaw and his young charge is palpable; the roles are the sort that actors dream of, and Smit-McPhee and Fassbender are triumphant. 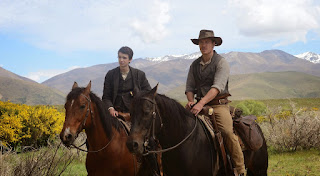 While possessing all the elements you expect in a Western – beautiful scenery, violent action, strong men and strong women, and a powerful lead-slinging finish – it is in no way typical.  Tone-wise, it is a darkly comic tragedy, with a savvy script, strong performances, and characters who seem to be not created for the story, but to be real humans who are driven together by fate.

Filmed in his native Scotland and in New Zealand, it is the debut feature by writer and director John McLean, a musician whose film career grew out of making videos for his two bands, THE BETA BAND and THE ALIENS.  He has a strong career ahead of him, although my one quibble is that we never are given any sense of how the girl and her father, or young fellow, made their journey from the British Isles to the States. 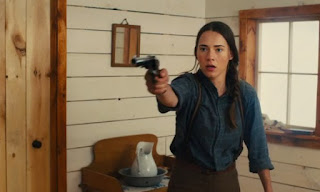 Also in the film is the amusing but villainous Ben Mendelsohn.  The simple but effective guitar score is by Jed Kurzel.  The cinematography, which is not only beautiful, but never hints at being anywhere but Colorado, is by Robby Ryan (PHILOMENA).  SLOW WEST, from Lionsgate, is available on BLU-Ray and DVD on Tuesday, July 7th.  Special features are a ‘making of’ video, and a pair of deleted scenes.

Every Thursday night at eight, Western novelist Jim Christina and bubbly OutWest purveyor Bobbi Bell spend an hour with a different author, discussing their work, on ‘The Writer’s Block Show’.  Jim Christina has written about a dozen novels, many featuring his 1880s avenger known as The Hunter.   Bobbi, with her husband, runs the delightful OutWest Boutique and Cultural Center in Newhall, which has hosted many a Western literary event, and every year at the Santa Clarita Cowboy Festival, Bobbi’s Buckaroo Bookshop is the central gathering place for chaps-wearing literati, an event in which Jim also participates. 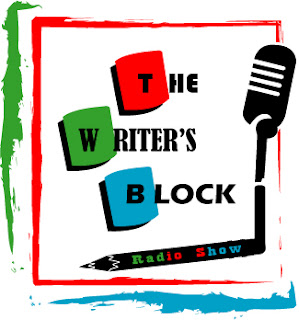 The lively and freewheeling radio discussions just started in May, and already there are seven available for your podcasting pleasure, all of them with a Western bent, including screenwriter, historian and novelist Courtney Joyner; author and documentarian Joyce Fitzpatrick; novelist Margaret Brownley; the filmmaking team of author Eric Heisner and illustrator Al Bringas; lawman-turned-historian J.R. Sanders; novelist D.B. Jackson; and novelist and Western children’s author Janet Squires.  At a time when most talk shows seem to be read from a publicist’s script, these shows are refreshingly off-the-cuff, a mix of anecdotes and nuts-and-bolts discussion about the work of writing.  And you can call in with your own questions. 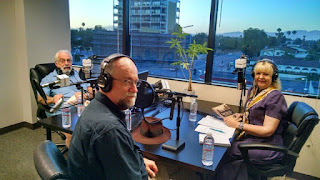 UPDATE!  This Thursday, July 9th  Jim Christina will be answering the questions instead of asking them.  Author John Bergstrom will be the guest on July 16th. On July 23rd, the eerily entertaining author of weird Westerns, Ed Erdelac will discuss his work.  Rounding out July, on the 30th, yours truly will be in front of the mic.   THIS LINK will bring you to L.A. TALK RADIO for the live broadcast, Thursdays at 8 pm. THIS LINK will bring you to podcasts of all previous shows.

‘SUPPORT YOUR LOCAL SHERIFF’ SATURDAY AT THE AUTRY! James Garner, an actor whose easy charm let him slip effortlessly between comedy and drama – almost always with romance – stars in SUPPORT YOUR LOCAL SHERIFF (1969), Saturday, July 11th, at 1:30 in the Wells Fargo Theatre.  It’s directed by the master of Western action comedy, Burt Kennedy, who with this film gave two of the screen’s great villains, Bruce Dern and Jack Elam, a chance to play comedy, giving Elam in particular a whole new career.   Part of the Autry’s long-running What is a Western? series, the film will be introduced by Jeffrey Richardson, Gamble Curator of Western History, Popular Culture, and Firearms.

THE DUKES OF HAZZARD is being dropped by TV-LAND because it features the Stars and Bars.  When it comes to the Civil War, I have no doubt that the right side won, but I thought that war was over.  I was never a big fan of DUKES – I love Waylon Jennings’ music, and Catherine Bach in her ‘Daisy Dukes’ – but I generally got my fix of both during the title sequence, then switched to something else.  But I caught enough episodes to know that there was nothing racist or offensive going on.  And before you say, ‘who cares?’, remember that every episode had writers, directors, and plenty of actors, who did nothing wrong, but whose work will no longer be seen.  And more crucially, those people were counting on residuals to pay their bills!

TV-LAND is a business, of course, and has a responsibility to sponsors not to offend viewers.  But there was no outcry against this harmless and inoffensive comic action show.  Unfortunately we live in an age of moral one-ups-man-ship where you measure your superiority by the number of things that offend you, kind of a new-age spin on broadening your phylacteries  (I looked that one up -- Matthew 23:5).

C’mon TV-LAND!  They’re just good ol’ boys, never meanin’ no harm!  It’s time for you to cowboy up!  By the way, I love the idea that, to avoid offense, they’re taking the Confederate flag off of the toy ‘General Lee’ cars, but continuing to sell them, and call them ‘General Lee’.  Who do they think they’re named after?  Sarah Lee?

Next week I’ll have reviews of the seasons premieres of HELL ON WHEELS and GUNSLINGERS!