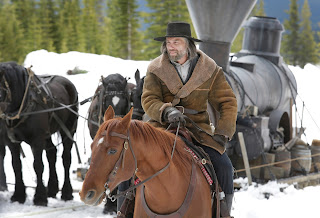 On Saturday, July 18th, AMC’s HELL ON WHEELS returns for its fifth, and sadly final, season.  There will be seven episodes this summer, and then the final seven will air sometime in 2016.  The first episode of the new season, CHINATOWN, written by Jami O’Brien and directed by David Straiton, welcomes back Cullen Bohannan (Anson Mount), who has switched his allegiance from the Union Pacific Railroad to the Central Pacific, in the race to complete the Transcontinental Railroad.  The episode begins with a dream, and then takes off with a bang – literally – when Cullen, leading a crew blasting their way through the Sierra Nevada Mountains, gets more of a charge than he bargained for.

When the series first began, Cullen’s motivation was revenge for the killing of his wife and child.  He has a new wife and child now, and what drives him is the need to find them.  He has a new obstacle to his work, in that much of the crew is Chinese, and communication is difficult.  Moreover, while he’d had no problems working with his largely Irish and freed slave crews, they had leaders – Psalms, Elam Ferguson – who, while sometimes adversarial, were often helpful, and looked out for their people.  Cullen now faces a sinister new menace in the suave Chang (Byron Mann), the Chinese-American jobber who provides the Chinese labor for the railroad, and is in a struggle for power with Cullen.

While season four had a high mortality rate among favorite characters, Cullen’s previous antagonists are back, from Southern Pacific Railroad chief Doc Durant (Colm Meany) to the Scandinavian you love to hate, Swede (Christopher Heyerdahl).  If the opener seems a bit choppy, it’s because so many story-lines need to be re-started, and new ones introduced.  With CHINATOWN (“Forget it, Jake”), HELL ON WHEELS season five is off to a promising and exciting start.  And for anyone who doesn’t remember just where last season ended, on Saturday AMC will be showing all of season four as a lead-in to HELL ON WHEELS season five. 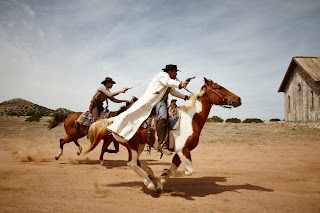 The docudrama series GUNSLINGERS returns to AHC – The American Heroes Channel – on Sunday, July 19th, for a second season outlining the lives of famous badmen and good.  As with most post-Ken Burns documentaries, the format is predictable: a mix of narration, historic photos, expert commentary, and reenactments.  While this setup has becoming overly familiar, GUNSLINGERS added two variations which make it considerably more enjoyable and involving than most of the genre.  First, the leads in the cast of the reenactments are actors as well as reenactors.   In addition to knowing how to ride and shoot convincingly, overall they give credible movie-quality performances, often working with a higher level of script, direction, and production values.

Second, each story is narrated by the central character.  Although the telling does not include an awareness that they are telling the story of their own demise, there is an amusingly arrogant, “Here’s the nonsense they said about me, and here’s the truth,” attitude to the proceedings.  It’s hard to know how factual and how fanciful the self-awareness is.  Some legends, like Tom Horn and Bat Masterson, wrote extensively (and often self-servingly) about their lives, but most did not.  But even if what went on in the heads of these men is largely guesswork, it’s based on fairly solid history, as opposed to the recent Bill O’Reilly fiasco, LEGENDS AND LIES, which interviewed some of the same experts, but then used discredited history and made embarrassing errors.

The second season opens with BUTCH CASSIDY – THE PERFECT CRIMINAL, revealing a man much more akin to the Paul Newman/BUTCH CASSIDAY AND THE SUNDANCE KID version than the William Holden/WILD BUNCH take.  The telling is entertaining, the action is extensive, and the cinematic approach underscores both the similarities and differences between the movie version and the admittedly cloudy historical record.  Ample time is spent on the different theories of Butch’s demise – whether he and Sundance died in South America or made it back home – and family interviews and scientific details give it a satisfying legitimacy. 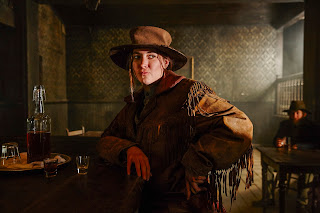 The other five episodes of the season will be SETH BULLOCK – SHERIFF OF DEADWOOD (Timothy Olyphant’s character from the DEADWOOD series), BAT MASTERSON – DEFENDER OF DODGE, BASS REEVES – THE REAL LONE RANGER, BILL DOOLIN & THE OKLAHOMBRES, and DEACON JIM MILLIER – THE PIOUS ASSASSIN.  DEADWOOD fans will want to catch THE SETH BULLOCK episode in particular, as Robin Weigert, who played Calamity Jane in the series, and DEADWOOD creator David Milch are among the commentators.

If you’d like a preview of GUNSLINGERS, three episodes from season one, Tom Horn, Wild Bill Hickok, and Billy the Kid, will be shown earlier in the day.

Pablo Fendrik wrote and directed this tale of mercenaries who kill farmers and claim their land, until a mysterious man emerges from the Rainforest to save the kidnapped daughter of a farmer! The film stars Alice Braga (ELYSIUM) as the daughter, and Gael Garcia Bernal (Che Guevara in THE MOTORCYCLE DIARIES) as the avenger.  Read my review in next week’s Round-up!

WEDNESDAY’S ‘WORD ON WESTERNS’ HONORS WORTHY WOMEN OF THE WEST!

At noon on Wednesday, July 15th, The Autry’s Crossroads West Café is the place to be for Rob Word’s A Word on Westerns, where a delicious lunch is followed by an engaging discussion of a Western movie topic led by filmmaker and historian Rob Word, with guests who know the industry first-hand.  I’m not going to post a tentative guest list until I get the okay from Rob – already some expected guests had to drop out because of schedule conflicts or health concerns.  But Rob always gets an excellent panel built around an interesting topic, in this case, Women of the West.  Incidentally, the program is free, but the lunch is not, unless you can trick someone into picking up your tab.  By the way, as these events have gotten more and more popular, attendees have begun to arrive earlier and earlier to assure having a seat.  As a result, the rumor is that the doors will close at noon – so get there early!

As a teaser, here is a great woman of the West, Jacqueline Scott, at a previous Word on Westerns luncheon, talking about working with Henry Fonda and James Stewart.

Hosts Jim Christina and Bobbi Bell will be joined by Western singer/songwriter John Bergstrom Thursday night at 8.  A native Angelino, John, whose 4th album is entitled BUTTERFIELD STAGE, performs a mix of traditional and original songs, with such intriguing titles as Throw Down The Box, Latchkey Cowboy, Red Rocks of Sedona, and St. Francis Dam, the last referring to the dam that collapsed and killed about 500 (again I say, “Forget it Jake.  It’s Chinatown!).  You can learn more about John (to help think up call-in questions) HERE.   You can listen to the show live (at ‘Listen Live 2’) HERE,  And listen to this or any previous programs on podcast HERE. 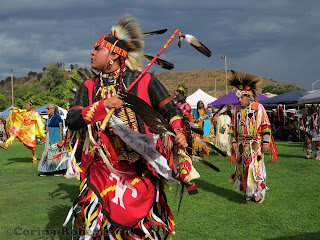 Next weekend, Moorpark College will play host to an annual intertribal powwow that brings together many tribes, including native people from Alaska, Hawaii, the First Nations People of Canada, and Central and South America. All are welcome to the powwow, which is part  ceremony and part social, and is both a meeting place and a market place.  Most importantly, it’s a place where youngsters can learn from the wisdom and experience of their elders.  Among the many activities offered are singing, dancing, honoring ceremonies, arts, crafts and food booths, other nonprofit associations, tipis, story tellers, flint knapping, traditional craft demonstrations, and many opportunities throughout the weekend for people to experience the intertribal circle.

Friday night features an open flute contest, and Saturday is the Powwow Princess Contest.  It’s an outdoor, family friendly event, and a $2 per vehicle contribution is suggested.  You can learn much more HERE.  Moorpark College is at 7075 Campus Road, Moorpark, CA 93021, in Ventura County.

According to DEADLINE HOLLYWOOD, HATEFUL 8 director Quentin Tarantino revealed at COMICON today that Ennio Morricone, five-time Oscar-nominated composer, and winner of an Honorary Career Oscar, will score the new Western, his first original Western score in four decades!  Follow this link to a DEADLINE HOLLYWOOD interview at Comicon with Tarantino HERE.  : 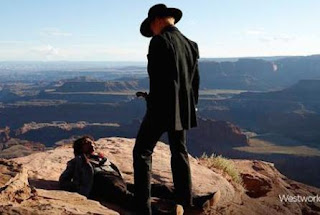 The subject of the Comicon panel was the series PERSON OF INTEREST, but HBO producer surprised the assembled with a trailer from the upcoming miniseries WESTWORLD, based on the Michael Crichton/Saul David 1973 film about vacationers who indulge their fantasies with human-like robots in ‘safe’ environments.  That man in the black hat is Ed Harris, taking on the role Yul Brynner played, of a robot who develops a mind of his own.  WESTWORLD should start airing sometime in 2016. 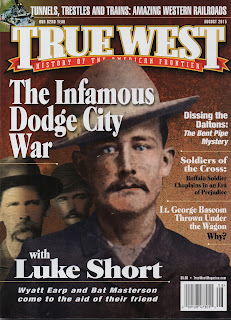 The August TRUE WEST should be on the newsstands soon.  My column this month, A Quarter-Century Tribute, celebrates the 25th anniversary of DANCES WITH WOLVES!  I also review the movie YELLOW ROCK.

Have a great week, and I’ll see you next weekend!