When you need a savior… 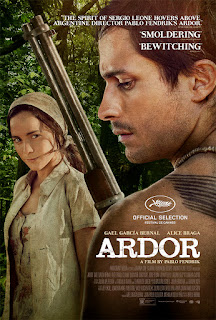 We never learned where Shane came from, or where he went to when his job was done; Clint Eastwood’s characters in HIGH PLAINS DRIFTER and PALE RIDER took the mystery to a nearly mystical level.  In writer/director Pablo Fendrik’s Argentinean Western, EL ARDOR, the hero seems to appear in response to primitive rituals made to river spirits by desperate jungle farmers.

Set in the rain forest of Misiones, the finger-shaped northern Argentinean province between Paraguay and Brazil, it is much like our wild west in the worst ways – the battle for vast tracts of jungle land has brought about horrifying violence.  Joao (Chico Diaz) is a poor tobacco farmer who has seen neighboring farmers forced to sell their land; seen them burned out; seen them murdered.   He senses the smoke is moving in his direction, and he, his one farm hand, and daughter Vania (Alice Braga), are no match for the three heartless hired guns who descend upon them with a bill of sale they want executed.  Kai (Gael Garcia Bernard), the man from the river, cannot stop the slaughter of the farmer and his hand, but when the gunmen take the daughter, Kai is quickly on the jungle trail, meant to seem as much a spirit as the gorgeous but deadly leopard who seems forever on the edge of camp.

Cinematographer Julian Apezteguia captures the beauty and menace of the jungle in a film which rarely travels indoors.  At times too deliberate in its pacing, it is a story of isolated, frontier lives, and it is a bare bones story in many ways.  There are only eight characters in the tale.  Most of them go through jungle and swamp in bare feet: only the three mercenaries – Jorge Sesan, Julian Tello, and Lautaro Vilo – have boots.   We think of cowboy characters as laconic, but these people redefine the term.  Most is said visually, in expression and gesture: there are perhaps three expository scenes with considerable conversation.  The minimalist approach does not always work to the film’s benefit; with so few turns in the story, there is continuity, but few surprises.  Then again, there is a hauntingly eerie, smoke-filled finale shootout.

Surprisingly, there is no Macguffin.  The real case that inspired Fendrik involved killing farmers and stealing land to grow soy.  Here it could soy, or oil, or wood – we never know, and never know who the hired guns work for.  An interesting and humanizing detail is that the gunmen are brothers, the two older ones trying to bring the youngest into the family business.

All of the performances are naturalistic and utterly believable.  The unselfconsciously beautiful Alice Braga is the only woman in the cast, strong without being a superwoman, and her character, with so much on her plate, is unaware of the desire she stirs about her.   Gael Garcia Bernard also is not superhuman – he plays his character as the right man in the right place at the right time, despite others seeing him as something more.  The mystical/supernatural element introduced at the beginning, dissipates.  The score by Sebastian Escofet is used sparingly but effectively; sometimes driving, sometimes almost symphonic, sometimes just throbbing bass-notes.  Released on Friday, July 17th, by Participant Media, it can be found in theatres, and is available on demand.

FIRST LOOK AT 'THE REVENANT'!


A SHORT BUT 'MAGNIFICENT' CHAT WITH WALTER MIRISCH 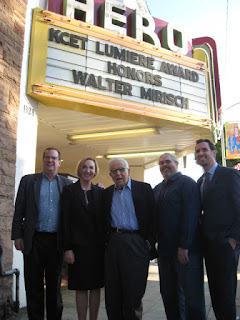 On Tuesday night, July 14th, at the Aero Theatre in Santa Monica, legendary producer Walter Mirisch was honored with the KCET Cinema Series Lumière Award at a screening of one of his finest films, THE MAGNIFICENT SEVEN (1960).  Mirisch, who would go on to produce WEST SIDE STORY (1961), THE GREAT ESCAPE (1963), and a plethora of film collaborations with Billy Wilder and Blake Edwards, and win the Best Picture Oscar for IN THE HEAT OF THE NIGHT (1967), started out producing at Monogram  in the late 1940s, producing a series of jungle adventures called BOMBA THE JUNGLE BOY.  The productions were a cut above the studio’s usual product, and things improved vastly when Mirisch made a deal to produce a series of Westerns starring Joel McCrea.

On the red carpet on Tuesday night, I had a chance to ask Mr. Mirisch about these early, excellent efforts. 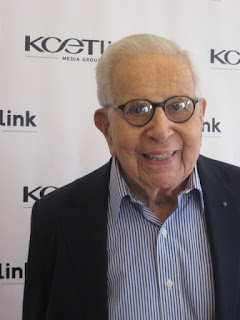 HENRY:  Which of the films that you did with Joel McCrea were your favorites?

HENRY: How different was it to make those films at Monogram and Allied Artists, with going on to make something as magnificent as what we’re going to watch tonight?

WALTER MIRISCH:  I don’t know.  You cut the cloth to fit the pattern.  You do the best you can with what you’ve got to do it with.  I’m very proud of those pictures; I wouldn’t deny them for a moment.

WALTER MIRISCH:  (laughs) My God, you go back a long way!  I was about 22 when I made those pictures! 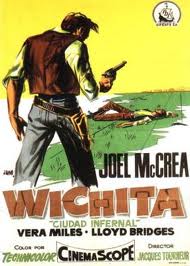 At that point Mr. Mirisch was introduced, for the first time, to James Coburn Jr., son of one of the stars of both MAGNIFICENT SEVEN and THE GREAT ESCAPE.  I’ll have more about this event, and what Mr. Mirisch had to say about making MAGNIFICENT SEVEN, soon in the Round-up!  Incidentally, WICHITA, THE FIRST TEXAN, and another Mirisch/McCrea collaboration, THE OKLAHOMAN (1957), are all available as MOD (made on demand) DVDs exclusively from The Warner Brothers Archive Collection.  Go HERE for details. 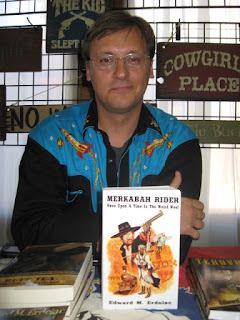 Filling in for Bobbi Jean Bell, dog trainer Russ Avion  will join host Jim Christina at 8 pm on this Thursday's Writer's Block, interviewing the very talented 'Weird West' author Ed Erdelac.  You can listen live (at ‘Listen Live 2’) HERE, And listen to this or any previous programs on podcast HERE .