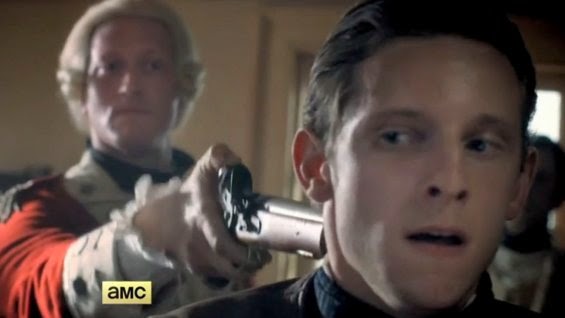 Tonight, April 6th, at 6 p.m. Western time, 9 p.m. Eastern, AMC’s new drama series, TURN, will premier.  Set in the midst of the American Revolution, it is based on the true story of the Culper Ring, a group of grown-up boyhood friends who became a spy network working to get information on Redcoat troop movements for General George Washington.

Based on the best-selling history book WASHINGTON’S SPIES by Alexander Rose, it is a spy-thriller with three-cornered hats, and I found the pilot enthralling.   Shot in Virginia, and set in New York’s Long Island, the story centers around farmer Abraham Woodhull, a married man with a baby son.  Long Island is occupied by the British, and the Woodhulls are among the families suffering the indignity of having a British soldier quartered in their home. 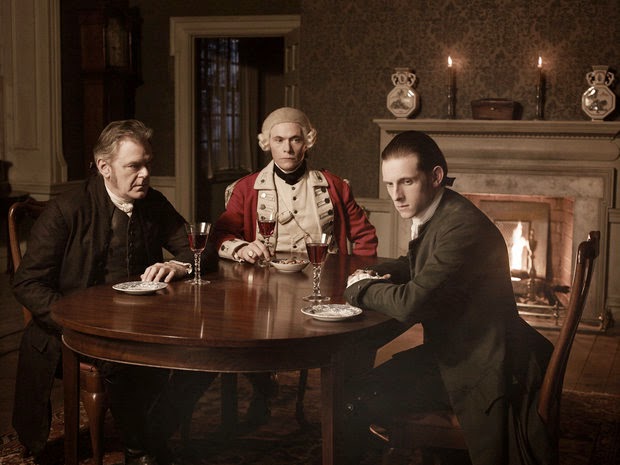 Woodhall has other problems as well: his crop of cauliflower is infested with maggots, which makes it unlikely that he’ll be able to pay off his debts – owed to a tavern-owner now married to Woodhall’s former beloved.  With the government controlling commerce, the desperate Woodhall tries to sell a few head of cauliflower on the black market, unsure of whether he has more to fear from British or the gun-toting colonists – and his simple act sets wheels in motion that will change the lives of everyone he knows. 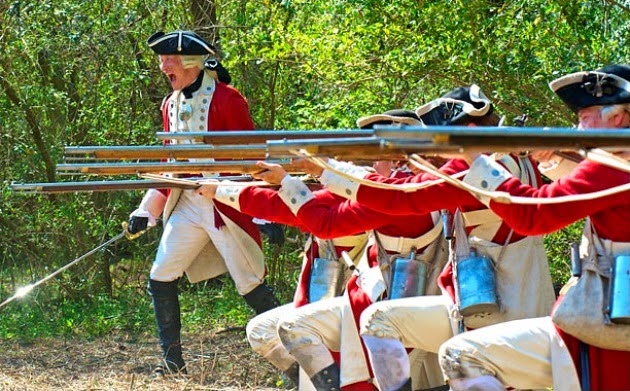 The at-first reluctant spy Woodhall is played convincingly by Jamie Bell – remarkable to realize that at the turn of the last century he amazed us all as the title character of BILLY ELLIOT.  Meegan Warner plays Mrs. Woodhall who wants her husband to have nothing to do with spying.  Heather Lind, who played Katy on BOARDWALK EMPIRE, plays Anna Strong, whom Woodhall would have married if she hadn’t spurned him.  And Seth Numrich, late of the grim comedy series GRAVITY, plays Colonial Army officer and Woodhall’s childhood friend Ben Talmage, who approaches Woodhall to help his country-in-the-making. 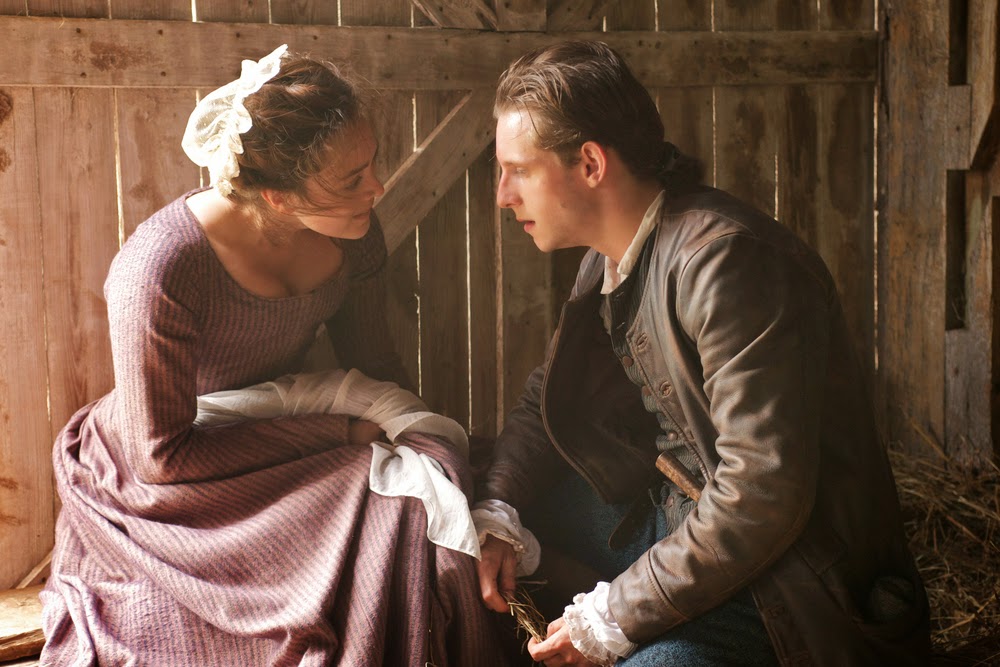 Written by Alexander Rose and producer-writer Craig Silverstein, whose voluminous credits include NIKITA, TERRA NOVA and BONES, the plotting is clever, the telling is smart, quick and sensible, with a fine eye for historical detail that creates reality without screaming about it.  The action is exciting and not for the squeamish – the occupying army is unflinchingly brutal, and the occupied must at times answer in kind.
Rather than being played as symbols, as is often the case with movies of this historical period, and despite the powdered wigs, the characters are motivated by a mix of practicality and ideals, just like real humans. 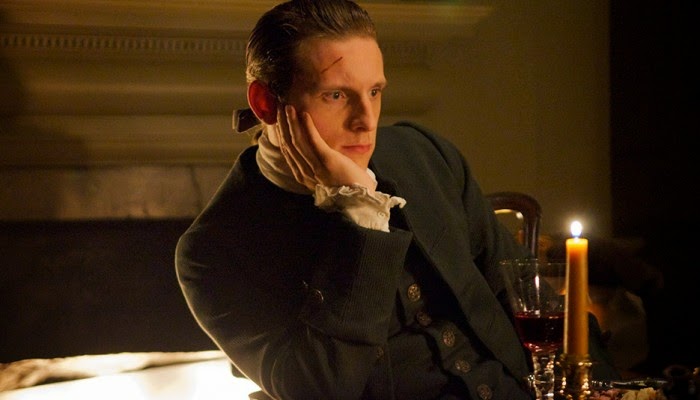 For myself, the most unnerving aspect of the show is that Robert Rogers, of Rogers’ Rangers, is one of the principal villains of the piece!  Having grown up loving the NORTHWEST PASSAGE series, starring Keith Larsen in that role, as well as Spencer Tracy in the feature, it’s troubling to see the rest of his history on the screen.   For hero though Rogers was in the French and Indian Wars, he was fighting alongside the British against the French.  It’s disappointing, but not unreasonable that he sided with the British again during the American Revolution.  Here he is played with gravitas by Angus McFayden, who was excellent in the recent COPPERHEAD, and is perhaps best remembered as Robert The Bruce in BRAVEHEART. 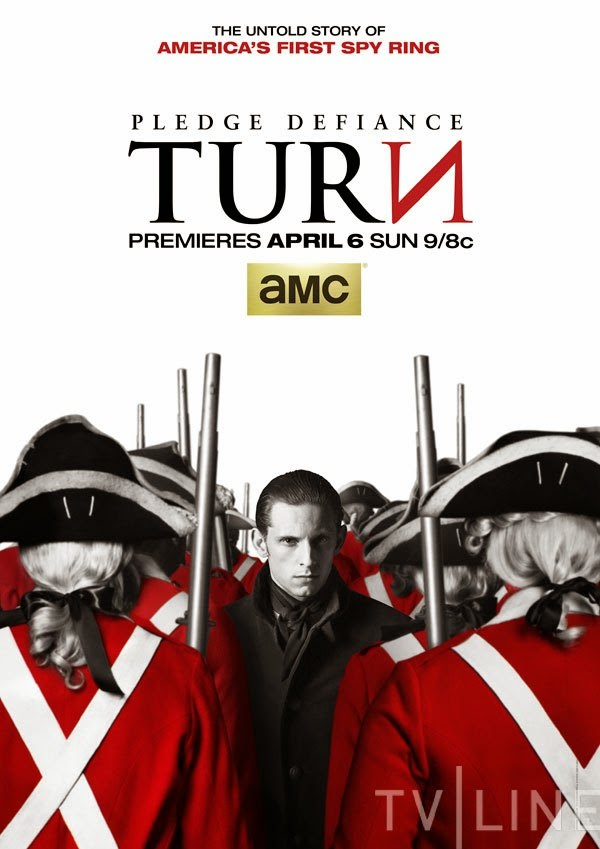 Tonight’s opener is ninety minutes, and will be repeated later tonight, plus on Monday, and next Saturday and Sunday.  The regular episodes will be an hour.  I’d make a point to see the pilot if I were you – it’s fine stuff, and my guess is it will continue to improve.

FIRST LOOK AT ‘THE HOMESMAN’! 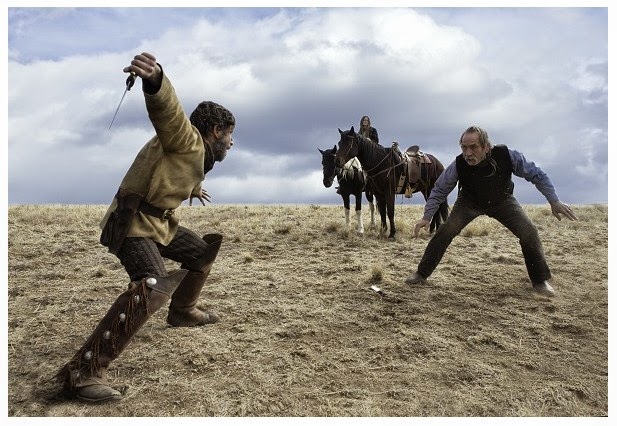 Here are the first images from THE HOMESMAN, which will premiere on May 24th at the Cannes Film Festival!  Co-written, directed by and starring Tommy Lee Jones, based on the novel my Glendon Swarthout, Jones plays a rustler who takes on the job of transporting three madwomen across the desert to an asylum in Kansas. 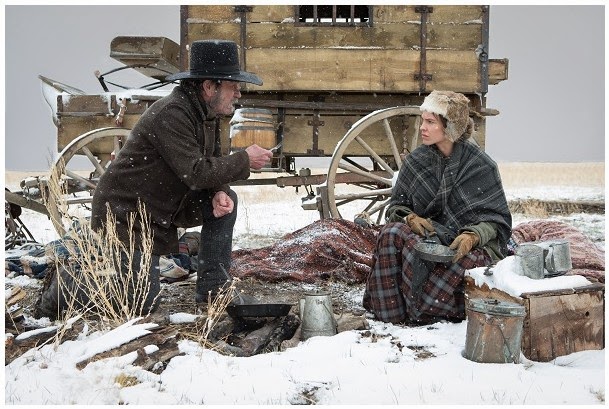 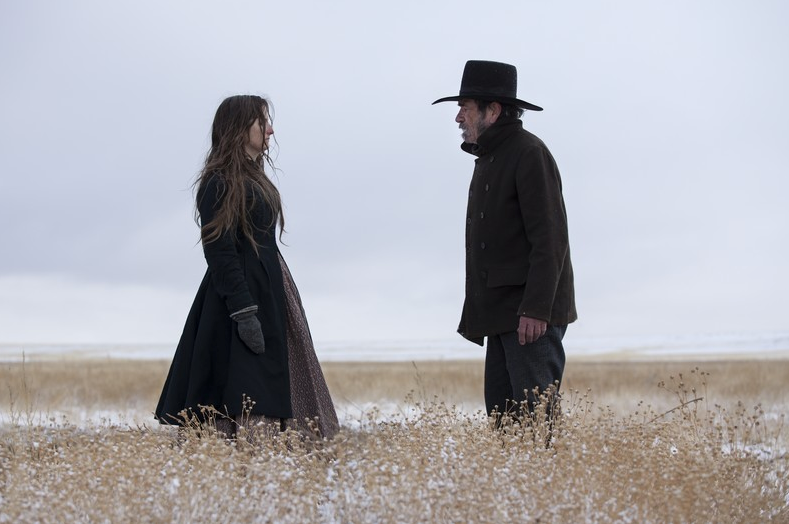 Novelist Glendon Swarthout has an excellent record in the cinema.  Films adapted from his novels include BLESS THE BEASTS AND CHILDREN, WHERE THE BOYS ARE, and the Westerns 7TH CAVALRY, THEY CAME TO CORDURA and, most famously, John Wayne’s final film, the marvelous THE SHOOTIST.  Glendon’s son, Miles Swarthout, wrote the screenplay for THE SHOOTIST, and was involved in THE HOMESMAN as well. 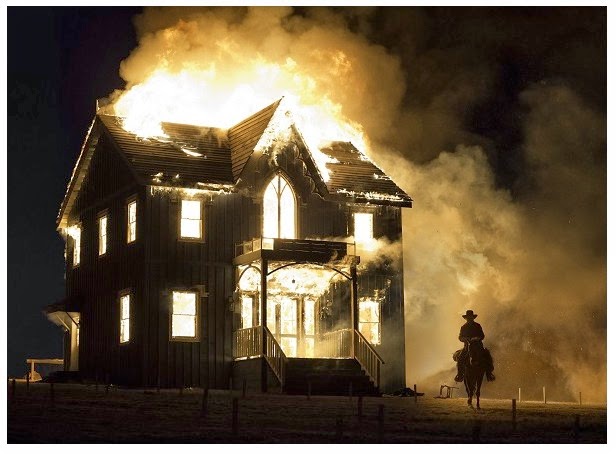 You can learn all about the Santa Clarita Cowboy Festival HERE http://cowboyfestival.org/ 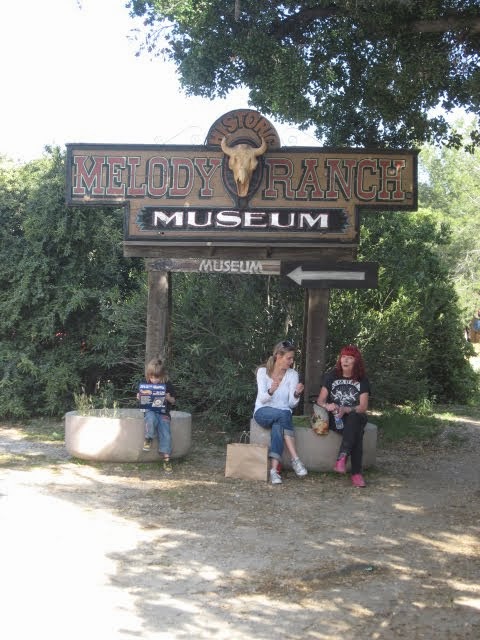 Speaking of the Santa Clarita Cowboy Festival, and yes, I’ve been speaking about it a lot, it’s coming to the Veluzat family’s Melody Ranch on Saturday and Sunday, April 26th & 27th.   What started as a working ranch has been a popular location for filmmakers for nearly a century.  Owned at one time by Monogram Pictures, then purchased by Gene Autry and christened Melody Ranch after his radio show, nearly every A or B Western star worked there at one time or another.  A very busy movie ranch, in growing demand with the resurgence of the Western movie and TV series, it was home base for both DEADWOOD and Quentin Tarantino’s DJANGO UNCHAINED, as well as many other films, music videos and TV commercials. 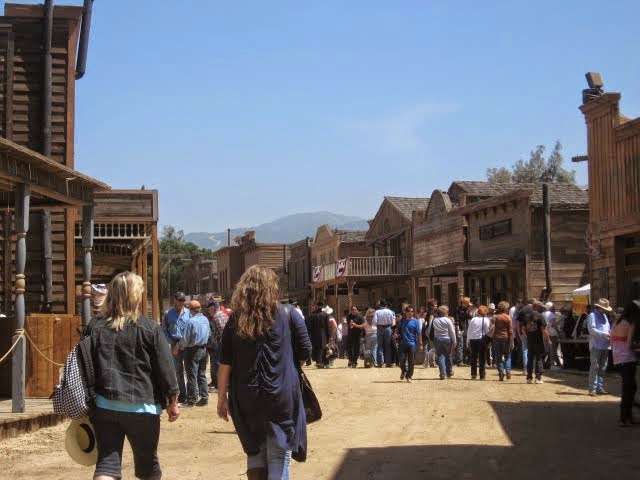 The Festival is an outgrowth of a Cowboy Poetry Festival held annually at Santa Clarita High School.  When the 1994 earthquake demolished the school’s auditorium, the Veluzat family offered the use of their movie ranch, and a twenty-year tradition was born.  There’s still poetry, as well as food, shopping for all things Western, strolling the ranch and visiting its museum.  There activities for children and adults, and all manner of entertainment, including magician Pop Haydn, gun-slinger par excellence Joey Dillon, and lariat-tosser Dave Thornbury.  Then there’s the music – at five different venues big and small throughout the ranch, more than twenty acts will perform, including Don Edwards, Sons of the San Joaquin, Waddie Mitchell, Cow Bop, Dave Stamey and many more. 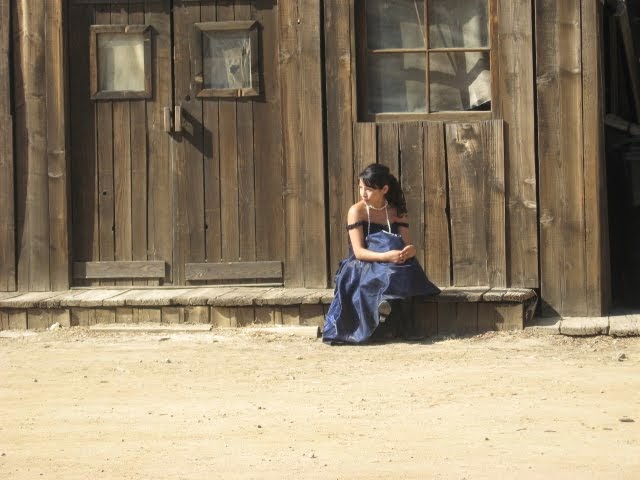 And in addition to the interviews I’ll be doing with Miles Swarthout, I’ll also be moderating a pair of authors’ panels.  On Saturday from 1:30 to 2, the topic is THE WEST IMAGINED, and I’ll be talking with Western novelists Edward M. Erdelac, author of COYOTE’S TRAIL; Jim Christina, author of THE DARK ANGEL; and C. Courtney Joyner, author of SHOTGUN. On Sunday, from 1:30 to 2, the topic is THE WEST LIVED, and I’ll be talking to non-fiction writers Jerry Nickle, great-grandson of the Sundance Kid; JR Sanders, author of SOME GAVE ALL; and Peter Sherayko, author of TOMBSTONE – THE GUNS AND GEAR. 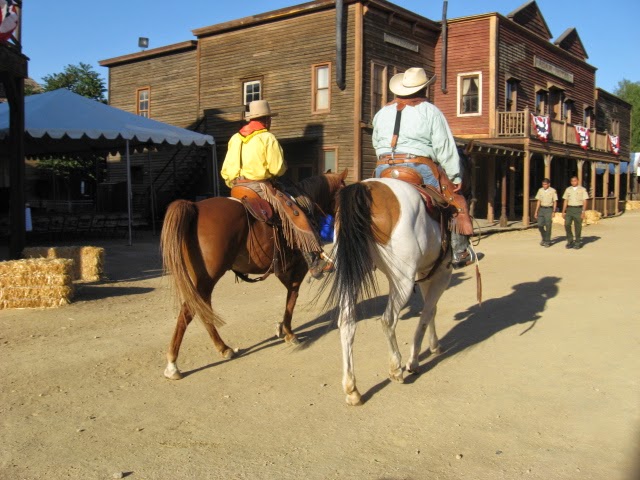 Admission is $20 per day for adults, $10 for kids, but the good folks at OutWest – click their logo at the top of the page to learn all about ‘em – are going to give away a pair of tickets to the event!  Thousands will pay, but you won’t have to if you’re our lucky winner!  How do you win?  Answer this question: For a long time, after Gene Autry had stopped making movies at the ranch, Gene held onto the property to provide a home to one particular horse.  What was that horse’s name?  E-mail your answer, along with your name, address, phone number, and what day you’d want the tickets for, to swansongmail@sbcglobal.net , with ‘Cowboy Festival Ticket Giveaway’ in the subject line.  The winner will be selected randomly from all correct entries, and announced in next week’s Round-up.  Good luck!

ROBERT DUVALL IN ‘A NIGHT IN OLD MEXICO’

For details on what Westerns are playing, check out last week’s Round-up here: http://henryswesternroundup.blogspot.com/2014/04/free-tcm-movie-locations-tour-heston.html
For details on all films and events, go here: http://filmfestival.tcm.com/ 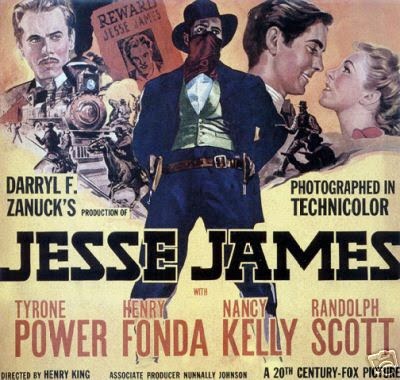 As part of the Autry’s ‘What is a Western?’ series, Henry King’s dazzling Technicolor telling of the James Brothers myth will be screened in 35mm!  The original screenplay is by the great Nunnally Johnson.  The cast includes Henry Fonda as brother Frank, Nancy Kelly, Randolph Scott, Henry Hull, Brian Donlevy, John Carradine, Donald Meek and Jane Darwell.  The film will be introduced by curator Jeffrey Richardson, who always provides fascinating background and insights into the films in this fine monthly series.  It’s at 1:30 p.m. in the Wells Fargo Theatre, free with your museum admission. 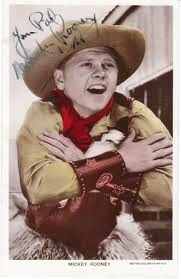 Just heard that the Mick has passed away.  I saw him at a number of events, but never got to talk to him.  But I had the pleasure of speaking with many child stars of the 1930s and 1940s over the years, and without exception they all held that the most talented and versatile of them all was Joe Yule Jr., a.k.a. Mickey Rooney.  A tremendous talent who will be sorely missed.  I’ll have more in next week’s Round-up.

I’ve got the TCM Festival coming up this week, Rob Word’s Cowboy Lunch @ the Autry saluting THE WILD BUNCH a week from Wednesday, and the Santa Clarita Cowboy Festival the week after that!  Should be a lot of interesting stuff coming up in the Round-up!