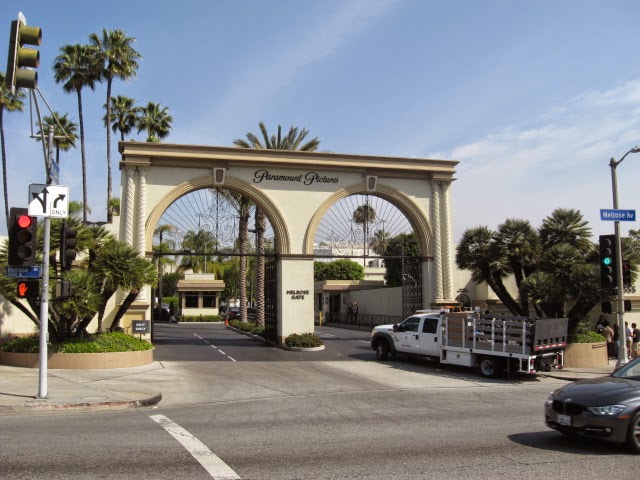 For exactly zero dollars, I enjoyed a three-hour tour (apologies to Gilligan) of movie locations in Hollywood, Downtown, Edendale, Echo Park, Chinatown and other filming locations; studios; old theaters; and other places of historic interest.  Turner Classic Movies is celebrating their 20th anniversary with a series of activities, culminating in their 5th Annual TCM CLASSIC FILM FESTIVAL in and around the Chinese Theater on Hollywood Boulevard (more about that later in this Round-up!). 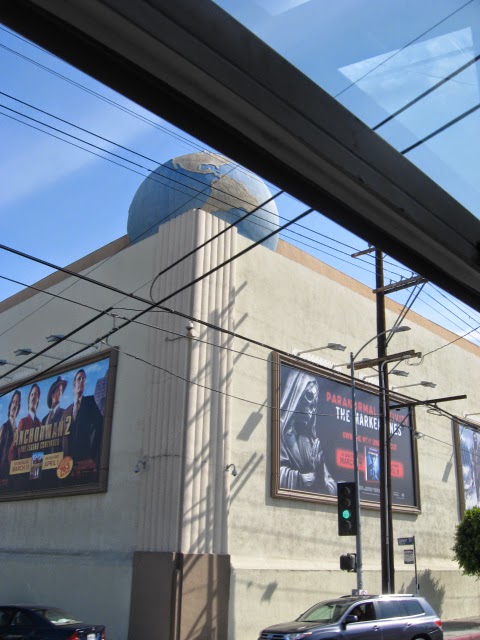 The RKO globe -- the lot is now part of Paramount

If you are a movie nut anywhere near L.A., you will want to take advantage of this --  there are eleven more available dates, from Friday April 4th through Monday April 14th  , and clicking the link below will get you all of the dates and times.  You meet in the footprint-famous forecourt of Grauman’s Chinese Theater, travel on a beautiful roomy bus which holds 45 or 50 passengers, with a knowledgeable tour-guide, and occasional commentary by TCM host Ben Mankiewicz on a big screen.  But the screen is mainly used to show scenes from films shot at the very location you can see through the windshield!  You’ll visit locations from films as old as Keaton and Sennett comedies and as new as FAST & FURIOUS films -- and that contrast is separated by just a couple of blocks! 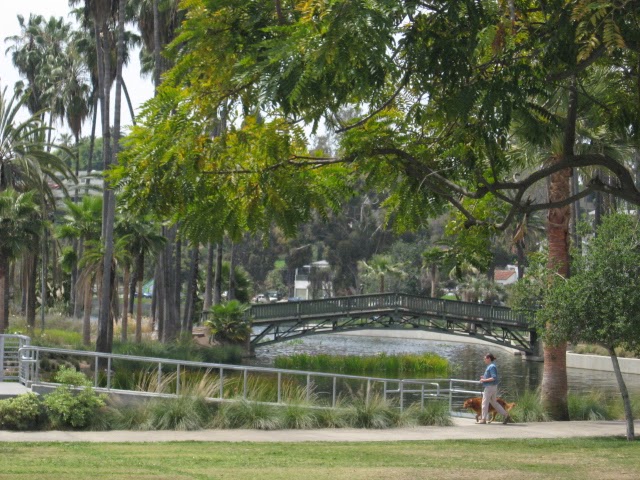 The Echo Park Bridge, used by Laurel & Hardy, and Jack Nicholson
in CHINATOWN

You’ll have two walk-around stops, at the Bradbury Building, and Union Station, both stunning and historically important examples of architecture in their own rights, as well as frequently seen movie locations. Now the website will tell you the tickets are all committed, but you can go on standby, AND THERE WERE NINE EMPTY SEATS ON OUR BUS!  And when the guide asked how many passengers were TCM viewers, only six of us raised our hands!  (The guide kept asking us movie questions, and my wife and I tried to restrain ourselves, but we were the only ones who knew the answers.)  Don’t waste this great opportunity to have a lot of fun, and learn a lot – I certainly learned plenty.  Here’s the link: http://www.tcm.com/20/

And if you go, please post a comment or send us an email about it!  Below are a few more peeks at things we saw on the trip… 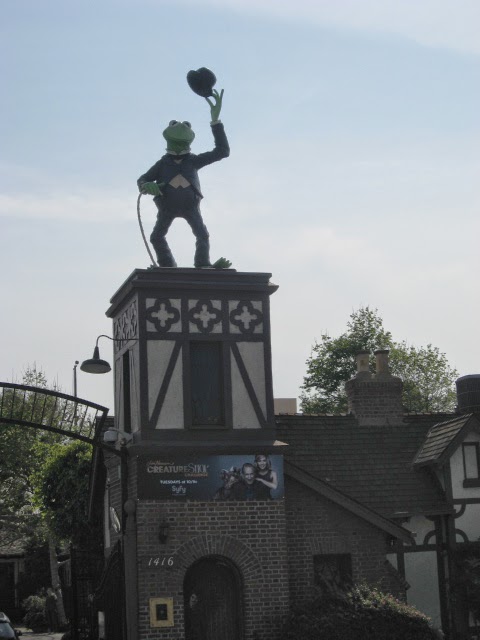 Once Chaplin Studios, now Jim Henson Studios -- in between
it was Red Skelton Studios and A&M Records 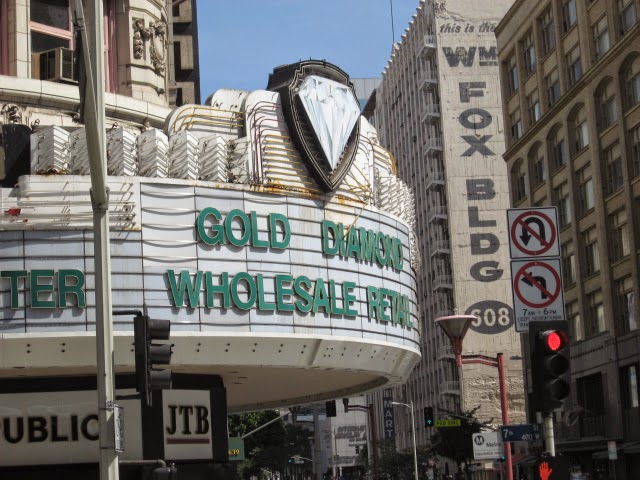 This jewelry store used to be a Warner Brothers Theatre - note
the diamond over the WB logo shield; also the William Fox
Builiding across the street 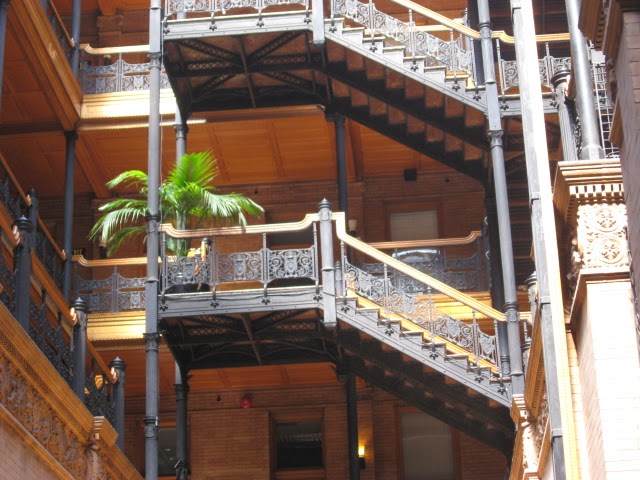 Inside the Bradbury Building 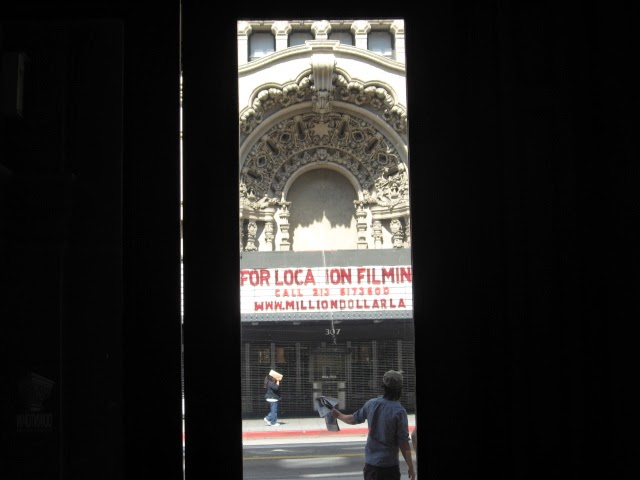 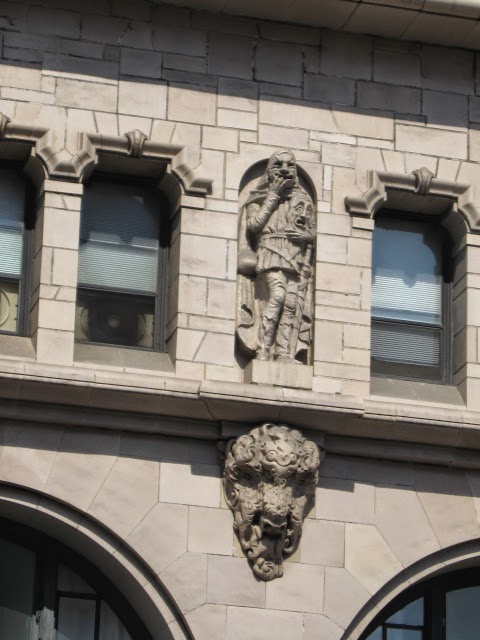 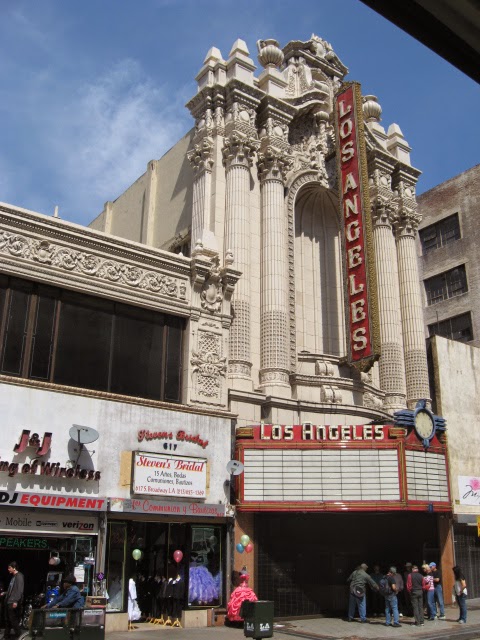 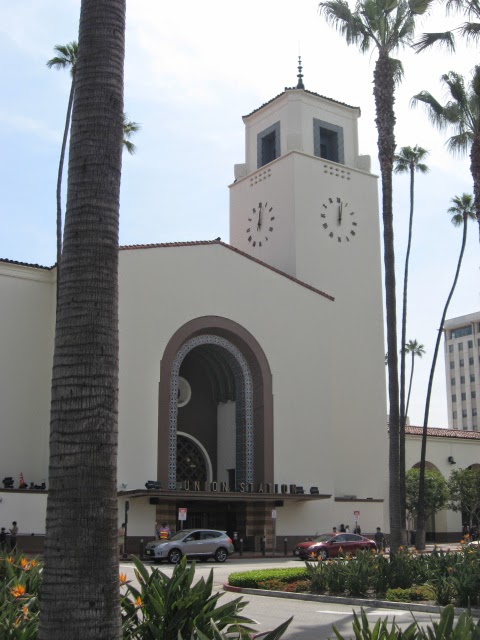 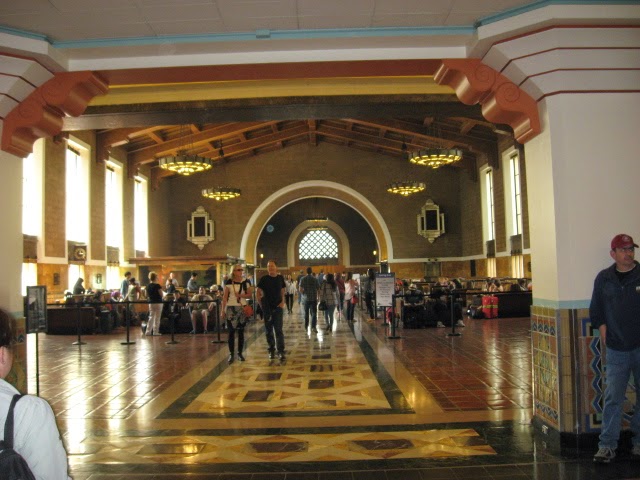 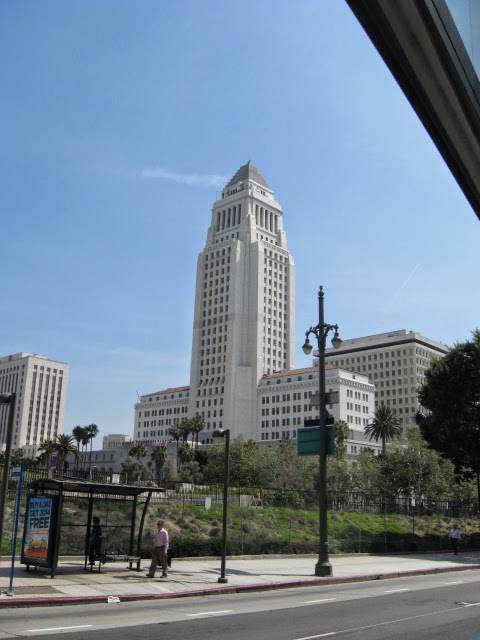 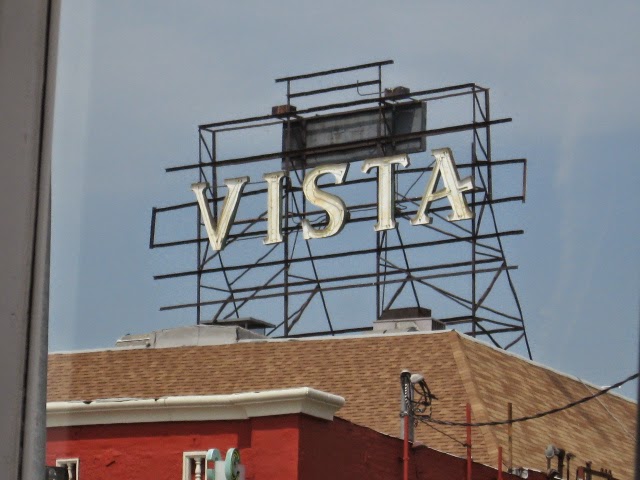 The Vista Theatre stands at the intersection of Hollywood
and Sunset Boulevards, where D. W. Griffith's
INTOLERANCE Babylon sets once stood 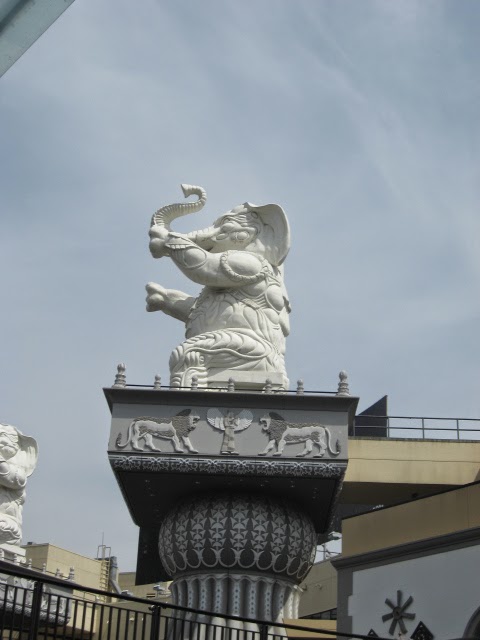 The elephant sculptures at Hollywood & Highland, an
homage to Griffith's INTOLERANCE 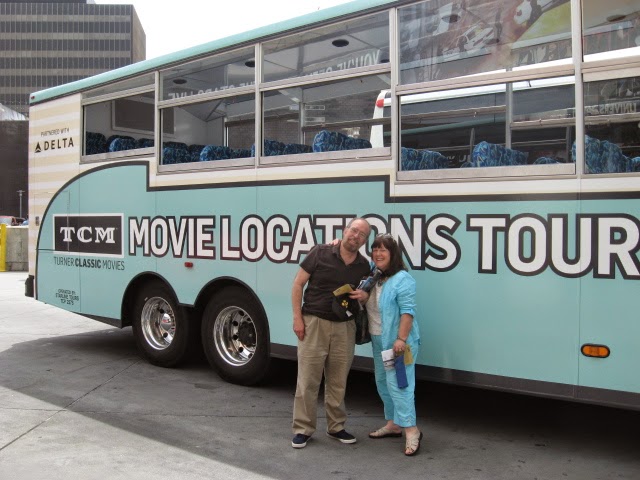 CHARLTON HESTON HONORED WITH A STAMP APRIL 11 AT CHINESE THEATRE! 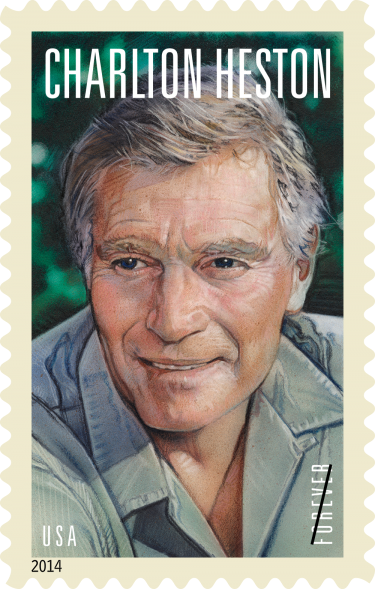 The late actor Charlton Heston will be honored on Friday April 11th with the 18th stamp in the Legends of Hollywood series.  In conjunction with the TCM Classic Film Festival, a dedication ceremony will be held at 10 a.m. at Hollywood’s Chinese Theatre, where the actor’s family will be represented by his son and collaborator on a dozen projects, Fraser Heston.  Best known for his portrayal of the title character in Wyler’s BEN HUR as Moses in DeMille’s THE TEN COMMANDMENTS, and as the last free human in PLANET OF THE APES, Heston had many fine Western roles as well.  Beginning in 1952, heb played a white boy raised by a Sioux chief in THE SAVAGE, and followed with PONY EXPRESS as Buffalo Bill Cody, ARROWHEAD, THREE VIOLENT PEOPLE, THE BIG COUNTRY, THE BUCCANEER as Gen. Andrew Jackson, Peckinpah’s MAJOR DUNDEE, WILL PENNY, THE CALL OF THE WILD, THE LAST HARD MAN, THE MOUNTAIN MEN, THE AVENGING ANGEL, and TOMBSTONE.  The dedication will be followed by a noon screening of Orson Welles’ TOUCH OF EVIL, costarring Heston and Janet Leigh.

The portrait, based on a photograph by his widow, Lydia Clarke Heston, was Drew Struzman, a master of movie art whose movie posters include all of the INDIANA JONES and STAR WARS movies, as well as Western-themed movie posters including BACK TO THE FUTURE 3, COWBOYS & ALIENS, FRISCO KID, and the up-coming Stephen King, DARK TOWER – THE MIST.  A show of the movie art of Drew Struzman and Bob Peak is currently on display at the Forest Lawn Museum in Glendale, and will continue through May 26th. 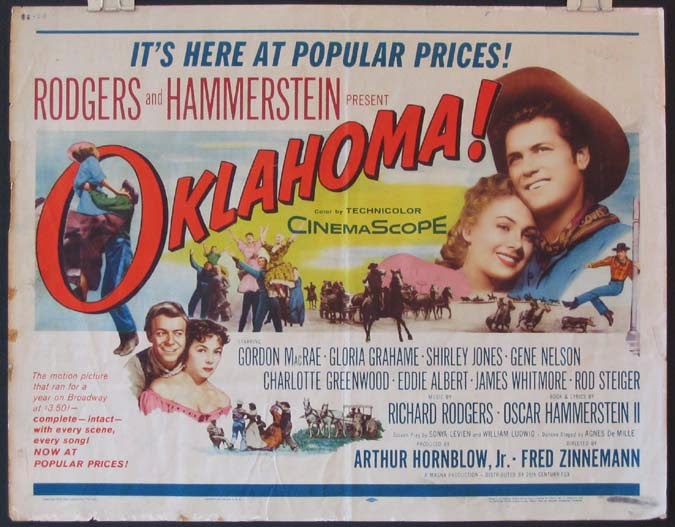 The 5th Annual TCM Classic Film Festival will open at 6:30 on Thursday night, April 11th, following the red carpet, with a screening of the newly restored Western musical OKLAHOMA! at Hollywood’s Chinese Theatre, with star Shirley Jones attending and discussing the film.  At 10 pm that night, Nicholas Ray’s JOHNNY GUITAR, starring Joan Crawford, Sterling Hayden and Scott Brady will screen at the Chinese Multiplex.  On Friday morning at 9:15, STAGECOACH will screen at the Multiplex.  At 9 pm, BLAZING SADDLES will screen at the Chinese, with a discussion with writer/director/star Mel Brooks.

On Saturday at 2pm, THE GOOD, THE BAD AND THE UGLY screens at the Chinese while, starting an hour later, across Hollywood Boulevard at the El Capitan, John Ford’s HOW GREEN WAS MY VALLEY will be shown, with a discussion by the movie’s star, Maureen O’Hara – that’ll be a tough call!  And on Sunday, GONE WITH THE WIND will screen at the Chinese at 1:30, and John Ford’s THE QUIET MAN will screen at 4:30 at the Chinese Multi.  There are dozens of non-Western screenings and events going on, with personal appearances by Jerry Lewis – he’ll have his footprints in cement at Grauman’s Chinese!, Alan Arkin, Richard Dreyfus, Ryan O’Neal, Tim Conway, Bo Hopkins, Candy Clark, Paula Prentiss, Paul LeMat, Bill Hader, Alec Baldwin, Patton Oswalt, Alex Trebek, directors Billy Freidkin, Joe Dante, and Gareth Edwards – he directed this summer’s GODZILLA remake and will introduce the original, composers Quincy Jones, John Williams, and Carl Davis.  I covered last year’s festival for the first time, and had a wonderful time.  The films are wonderful, the opportunities to hear filmmakers are unique, and it’s a delight to meet so many people who are as knowledgeable and passionate about movies as we are.  I highly recommend attending.  Individual tickets are available for any not-sold-out shows.  Learn more here: http://filmfestival.tcm.com/

Just got word that while we’re doing all of our usual Western activities, the folks from Warner Brothers will be shooting a movie at the ranch.  We’re all going to be shifted around a bit, as folks were when DEADWOOD was being filmed, but all activities will go on as scheduled.  Seeing as WB will be shooting on the main Western street, I’m guessing it’s for a Western. 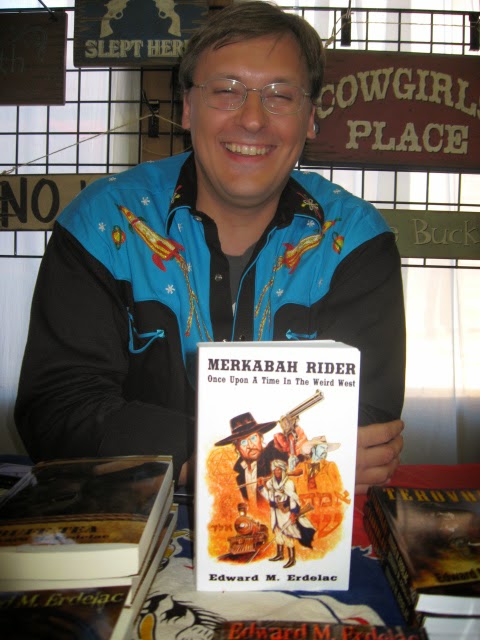 Here’s what I’ll be doing at the Santa Clarita Cowboy Festival: I’ll be moderating a couple of authors’ panels at the OutWest Buckaroo Book Shop.  On Saturday from 1:30 to 2, the topic is THE WEST IMAGINED, and I’ll be talking with Western novelists Edward M. Erdelac, author of COYOTE’S TRAIL; Jim Christina, author of THE DARK ANGEL; and C. Courtney Joyner, author of SHOTGUN – I hope to have my review of SHOTGUN and my interview with Court in next week’s Round-up! 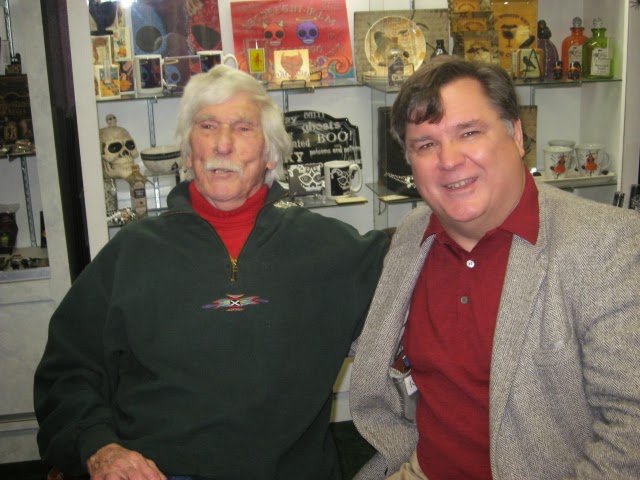 And on Sunday, from 1:30 to 2, the topic is THE WEST LIVED, and I’ll be talking to non-fiction writers Jerry Nickle, great-grandson of the Sundance Kid; JR Sanders, author of SOME GAVE ALL; and Peter Sherayko, author of TOMBSTONE – THE GUNS AND GEAR. 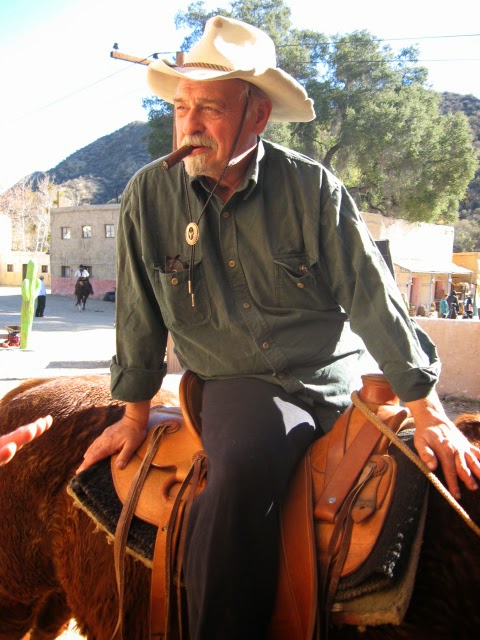 Also on Saturday at 12:30, and Sunday at 2:30, I’ll be chatting with Miles Swarthout, who wrote the screenplay for THE SHOOTIST from his father, Glendon Swarthout’s novel.  Miles is also involved with the upcoming movie THE HOMESMAN, directed by and starring Tommy Lee Jones, from a novel by Glendon Swarthout.  You can learn all about the events at the Buckaroo Book Shop by going HERE.
You can learn all about the Santa Clarita Cowboy Festival HERE http://cowboyfestival.org/
Hope to see you there! 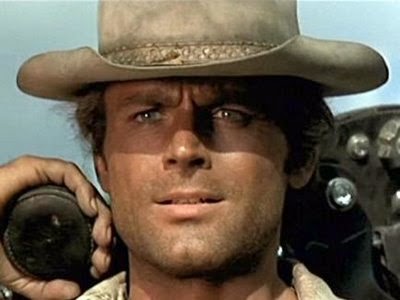 On Saturday, March 29th, one of the most talented and entertaining dramatic and comic actors in international cinema marked his 75th birthday.  Terence Hill was born in Venice of an Italian father and a German mother.  His birth name was Mario Girroti.  He started acting in films at the age of twelve, and before Spaghetti Westerns started he was a well-known villain under his own name in the German westerns films based on Karl May novels.  When Franco Nero refused to do another DJANGO film, Girroti, indistinguishable from Nero in make-up, starred in the excellent DJANGO, PREPARE A COFFIN, and a star was born.  Equally busy in Eurocrime dramas, Hill is best-remembered in the TRINITY films with Bud Spencer, and his films and TV shows as LUCKY LUKE.  A busy actor on Italian TV, where he has starred in 175 episodes of the current series DON MATTEO, he starred in two America-lensed Westerns in 2009, DOC WEST and TRIGGERMAN.