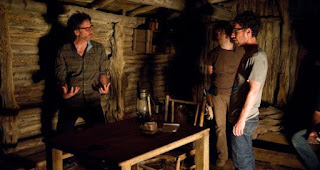 
Joel and Ethan Coen’s Western series, THE BALLAD OF BUSTER SCRUGGS is rolling camera in Albuquerque this month, reportedly from mid-July through mid-September! The brothers’ first entry into the small-screen Western format follows their excellent and hugely successful 2010 remake of TRUE GRIT, which received five BAFTA awards and ten Oscar nominations.


SCRUGGS will be an anthology series. It will consist of six episodes with six separate but interwoven story-lines. The first, SCRUGGS, will concern a singing cowboy, and in the title role is Tim Blake Nelson, who starred in one of the brothers’ earlier successes, 2000’s OH BROTHER, WHERE ART THOU? No stranger to the genre, Nelson played a freighter in the excellent but grim THE HOMESMAN (2014), his performance was one of the few bright spots in the dreary KLONDIKE miniseries (2014), and he appeared in the LONESOME DOVE miniseries prequel DEAD MAN’S WALK (1996).


NEAR ALGODONES, about a feckless would-be bank robber, will star James Franco, previously in WILD HORSES (2015) for Robert Duvall. Also starring are Stephen Root, who played a judge in the series JUSTIFIED (2012), and appeared in 2013’s SWEETWATER and THE LONE RANGER, and other Coen films; and Ralph Ineson, who plays Amycus Carrow in the HARRY POTTER films.


No casts have been announced yet for MEAL TICKET or ALL GOLD CANYON.  Zoe Kazan, currently starring in THE BIG SICK and previously in the indie Western MEEK’S CUTOFF (2010), will play the title role in THE GAL WHO GOT RATTLED. And finally, THE MORTAL REMAINS, following five stagecoach passengers to a mysterious destination, will star Tyne Daly, whose career I take credit for, since I wrote her her first role as a policewoman in 1977’s SPEEDTRAP, which she followed with CAGNEY AND LACEY (1981-1988).  She previously appeared on episodes of THE VIRGINIAN (1968) and MAGNIFICENT SEVEN (1999).  Updates are coming soon! 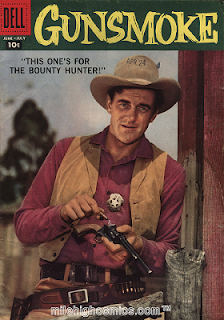 Starting on Monday morning, they’ll be running one episode at 9 a.m., Eastern on weekdays. Best of all, these are the 176 hour-long black & white episodes made from 1961 until 1966, which are among the very best, and not being shown by anyone else. They’ll also be showing at least four of the five GUNSMOKE movies from the ‘80s and ‘90s – on Sunday, July 16th it will be 1987’s RETURN TO DODGE, at 2 p.m. Eastern.  On Saturday, July 22nd, INSP will run a six-episode marathon of justice-themed GUNSMOKE episodes, and the GUNSMOKE movie TO THE LAST MAN. On Sunday, July 23rd, it’s a double feature of GUNSMOKE: THE LONG RIDE and GUNSMOKE: ONE MAN’S JUSTICE.


GUIDE TO THE OLD WEST – A Book Review 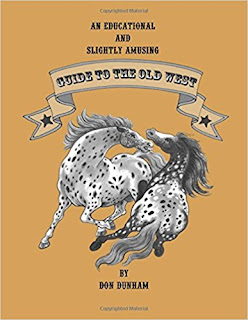 The full and modest title of this tome is An Educational and Slightly Amusing Guide to the Old West, and I hope it’s author, Don Dunham, won’t take it the wrong way if I say that it’s the best bathroom reader I’ve had in years! I don’t mean that the book is scatological in any way, but rather, that its alphabetical short-entry format makes it ideal for skimming and random reading for a couple of minutes at a time.  While not encyclopedic in scope, the 100-page volume can quickly give you a smattering of information on a host of Western topics. Its first entry typically describes in a concise paragraph the 101 Ranch:


“Large (110,000 acres), cattle ranch on Oklahoma founded by Confederate Veteran Col. George W. Miller. It also had thousands of sheep and thousands of buffalo. Established in 1879, it lasted into the twentieth century and began to put on Wild West Shows starring such future noted cowboys as Tom Mix and Will Rogers.”


While appealing to anyone with an interest in American history, as historian Peter Sherayko points out in his foreword, it’s just the thing for writers, historians, reenactors and actors, “…to get their creative juices flowing.” And not all entries are as brief as the example given. When a topic is of major importance, it is given as much space as it needs.  The “cattle drive” entry is nearly three pages, and full of details about the different routes, who did the work, what they were paid, and how they dealt with Indians along the way.  The entry about Indians is nearly six pages long, and other in-depth articles look at the Presidents, firearms, and the proper wardrobe of the working cowboy.


There are some confusing elements; a reference at the end of an article, such as “see film Wagonmaster 1949,” doesn’t refer to another entry in the book, but is rather a suggestion that you should see that movie (and you should, if you haven’t).  But overall, this large format – 8 1/2” X 11” – book is full of useful and amusing and enlightening information for adults and kids, with hundreds of ‘idea triggers’ when you don’t know which way to take your story.  It’s available from Amazon books for $19.95, HERE. 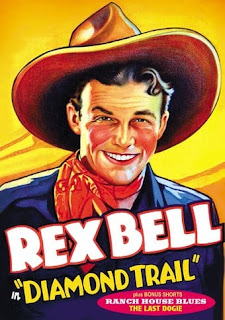 Handsome Rex Bell is one of those elusive B-western stars, rarely seen, and better known for his marriage to Clara Bow than for his movies. Alpha has unearthed a sparkling little 1930 Monogram programmer, DIAMOND TRAIL, in which Bell starts out not as a cowboy, but as big-city reporter Speed Morgan. When he saves gangster Flash Barrett (Lloyd Whitlock) from an ambush, pretending to be mobster Frisco Eddie, he becomes Flash’s best friend, and his plans to get the goods on Flash leads him to a western diamond-smuggling racket.


Also included are a pair of shorts. The 1930 Pathe two-reeler RANCH HOUSE BLUES is a Western comedy concerning an attempt to trick a crabby old rancher into selling, without telling him there’s oil on his land. The crab is former Keystone Kop Nick Cogley, and the romantic interest is Charlie Chaplin’s first wife, Mildred Harris.   1933’s THE LAST DOGIE is an Educational Pictures one-reel bunk-house musical starring Metropolitan Opera tenor James Melton singing traditional Western songs very well.   You can order it HERE. 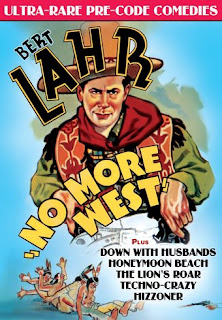 Here’s a fascinating collection of six talkie comedy shorts made before the 1934 Hays Code, or Motion Picture Production Code, put stringent limitations on what could be said or shown, in order to quiet would-be censors who found movies immoral.  The very best is Bert Lahr in NO MORE WEST, a particular delight to folks who only know Lahr as The Cowardly Lion in 1939’s THE WIZARD OF OZ.  Bert plays a Coney Island shooting-gallery operator who nabs a pair of bank robbers, which inspires him to move out west to a town where he’s immediately made the sheriff. It’s ridiculous fun throughout, with a few casting surprises: the lead bank robber is Harry Shannon, who would play Charles Foster Kane’s dad in CITIZEN KANE. The judge who appoints Lahr sheriff, Harry Davenport would soon be seen as Dr. Meade in GONE WITH THE WIND.


The rest of the shorts include another with Lahr, HIZZONER; a very early talkie directed by Mack Sennett, 1928’s THE LION’S ROAR; DOWN WITH HUSBANDS, featuring Bert Roach and Johnny Arthur (Spanky’s dad in the OUR GANG comedies) as husbands whose wives go on strike; HONEYMOON BEACH, where a greedy mom tries to force her daughter to marry wealthy Keystone Kop Billy Bevan; and the most bizarre of the bunch, TECHNO-CRAZY, involving a Bolshevik technology-run utopia, and plans to bomb the mansion of Mayor Billy Bevan.  The quality of prints varies greatly, but it’s an outrageous and often very funny collection.  You can order it HERE.

WATCH ME YAK ABOUT TV WESTERNS!


I recently spent an enjoyable afternoon being interviewed for a webcast, along with fellow blogger Patti Shene, about the TV Western. The interview was for Dan Schneider’s COSMOETICA series, which I understand is the longest-running webcast series on the arts.  If you enjoy it, take a look at the links to Dan’s other webcasts – he finds a lot of very interesting guests and topics.


Tonight, I got an email from a friend who noted that it had been over a month since I’d posted a new Round-up.  He wanted to know if I’m alright.  I am. But other priorities have kept me from the blog for some time.  I’m back, and my backlog of articles and interviews and film and book reviews which need to be written and posted is truly staggering!  I’ll catch up as quickly as I can!