‘HELL’ ROLLS IN FOR ROUND 3 SATURDAY NIGHT! 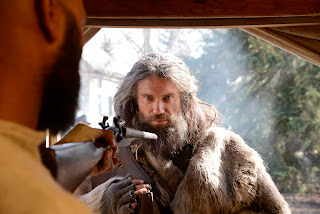 ‘HELL ON WHEELS’ returns to AMC on Saturday night, August 10th, with a two-hour, two episode opener, entitled BIG BAD WOLF and EMINENT DOMAIN.  It promises a season three with even more of the adventure, conflict, depth of character, and accurate sense of history, that the series’ legions of loyal camp-followers have come to expect.  It is, to put it mildly, a powerful opening. 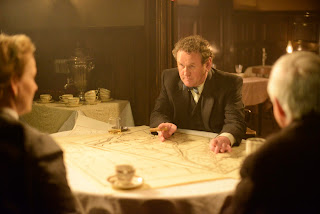 For anyone new to the series, it is the story of the building of the Transcontinental Railroad just after the Civil War, much of it seen from the point of view of Cullen Bohannon (Anson Mount) a trained engineer and former Confederate Officer.  His original enlisting with the project was a subterfuge – his wife and child were murdered by Union soldiers, and his work on the railroad provided both cover and information to track the men down and exact revenge.  But the building of the railroad has become his salvation, a mission in a life which had lost its driving force with the loss of his family.  The title of the series refers to the portable town – with offices, dormitories, saloons and brothels – that travels alongside the ever-advancing track-layers; the town of Hell On Wheels. 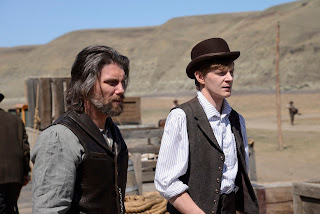 The curtain rises on Cullen awakening Rip Van Winkle-like to find himself in the snow-bound, burnt-out ruins of Hell On Wheels, which had moved with the construction of the railroad until, at the end of season two, the understandably intransigent Indians had attacked, killing all they could, and burning everything to the ground.  Finding himself in the company of dead men and live wolves, Cullen, in a sequence as audacious and self-confident as his character, sets the story and the locomotive back on its tracks, and as he sets out for the dueling railroads’ headquarters in New York City, en route we catch up with the lives of other characters. 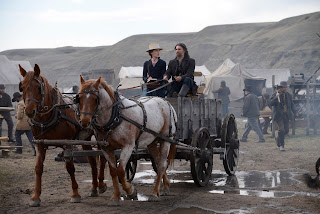 Elam Ferguson (Common) is a former slave turned railroad security man, who shares an uneasy alliance with Cullen Bohannon.  Elam and his woman, Eva (Robin McLeavy) are anticipating the birth of their first child.  Railroad magnate Thomas ‘Doc’ Durant (Colm Meany) is, surprisingly, where he belongs: behind bars – Durant, by the way, was a real man, and every bit the snake he is portrayed as.  Sean McGinnes (Ben Esler), the young Irishman who had come to Hell on Wheels as a peep-show operator and then pimp has graduated to be Hell on Wheel’s book-keeper.  Ruth (Kasha Kropinski), the daughter of the disgraced and dead minister is again preaching in his stead.  Lily, who with her late husband had surveyed much of the route for the railroad, and had become important in the lives of Bohannon and Durant and so many others, was murdered by ‘The Swede’ last season.  Perhaps it is in her stead that we now see a new young woman, Louise Ellison (Jennifer Ferrin), a reporter covering the re-started construction of the railroad for Horace Greely’s New York Tribune. 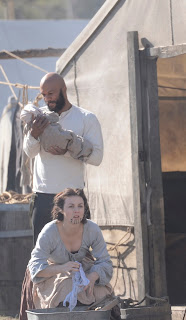 And as the story gets underway, she will have many topics to write about, not all of them pretty, particularly the issue of eminent domain, the government’s power to seize private property for the ‘greater good’, paying what is often ironically termed ‘fair market value.’  In this case, the Union Pacific Railroad has been granted the power to seize land for its right-of-way, and Cullen, as the Railroad’s point man, must contend with the settlers whose property it is.  The result is a stunning tragedy, the more so for its utter believability. 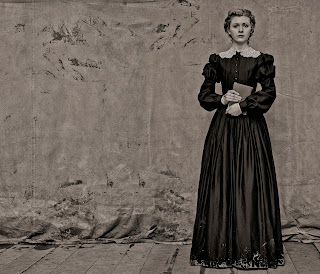 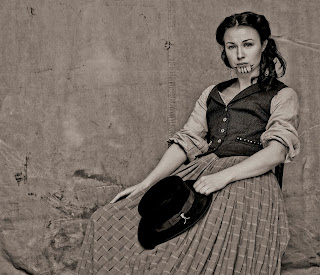 While the show certainly does not seek to offend, neither is it politically correct if that would badly serve the truth behind the story.  You will hear the ‘n-word’ in circumstances where it would have been naturally used at the time.  You’ll hear the prejudices that people held against the Mormons and the Irish without sugar-coating.  Much as I love TV Westerns, they have a weak history when it comes to history – an attitude that any saddle will do, that all cowboys were white and American-born, that all Indian tribes are interchangeable, that any gun but an Uzi is acceptable, and no one ever needs to re-load.  Not on HELL ON WHEELS.  Along with the layered and complex story-telling, there is a clear determination among the dramatists and directors to get it right, and they usually do.  The performances and characterizations continue to be solid.  The tech credits are commendable.  Happily, it’s been long enough since I’ve read Stephen Ambrose’s book about the building of the Transcontinental Railroad, NOTHING LIKE IT IN THE WORLD, that I don’t remember what, historically, is coming next.  I can’t wait to find out – it looks like one Helluvah season on HELL ON WHEELS. 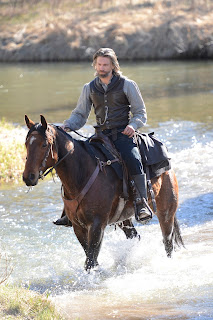 ‘KNIGHT OF THE GUN’ IN THE CUTTING ROOM

Director John Graves Warner is still editing his new Western, KNIGHT OF THE GUN, but he’s already assembled a trailer.  Check it out! 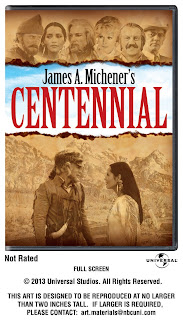 Universal will be releasing ‘CENTENNIAL’ in DVD and BluRay editions this October.  Based on the historical fiction best-seller by James Michener, winner of the Pulitzer Prize for Fiction and the Presidential Medal of Freedom, this 12 episode mini-series has rarely been seen since its original 1978-1979 airing.  Set in the fictional town of Centennial, Colorado, it traces the story of generations of characters from the start of the settlement in 1795 into the 20th century.

The six disk set will feature 26 hours of content (not sure if that includes special features), and a cast that boasts Raymond Burr, Richard Chamberlain, Robert Conrad, Barbara Carrera, Sally Kellerman, and dozens of others, including Western favorites like Brian Keith, Dennis Weaver, Donald Pleasance, Robert Vaughn, Anthony Zerbe, A Martinez, Michael Ansara, and Pernell Roberts.  I hope to have more details soon.

Late in the spring I started running a panel-per-day of a comic-book version of THE NEVADAN, a 1950 Columbia film starring Randolph Scott, Dorothy Malone and Forrest Tucker.  It was featured in 1950s western movie magazine my daughter had given me.  The response was enthusiastic, so in June I ran the ‘story so far’ in the Round-up (if you missed that, go HERE ).  Having just finished running the conclusion on Facebook, I’m running the final panels here.  If I ever run into any of these comic strip Westerns, I’ll share ‘em as well. 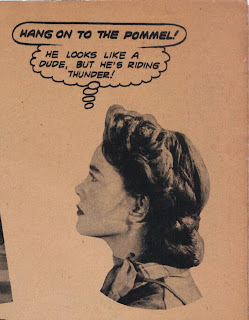 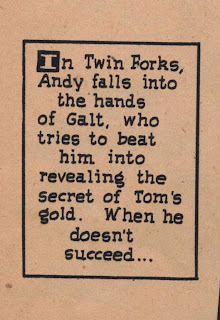 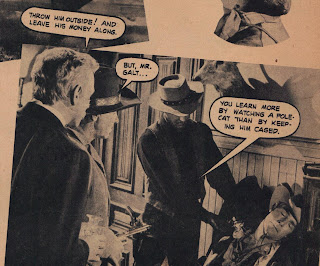 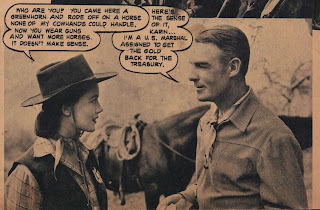 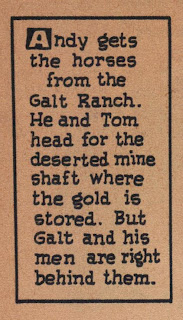 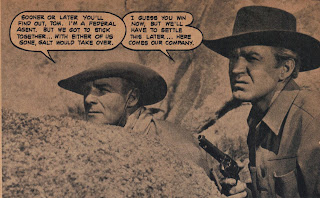 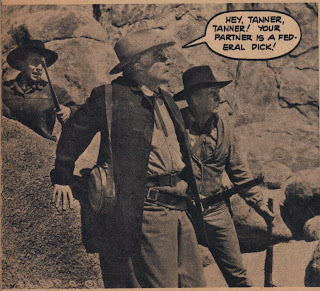 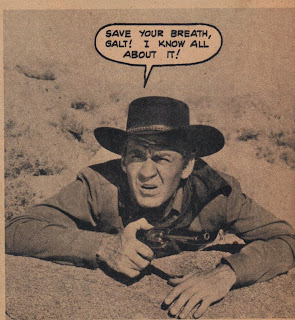 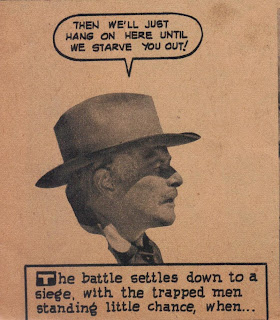 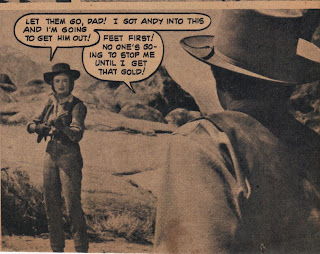 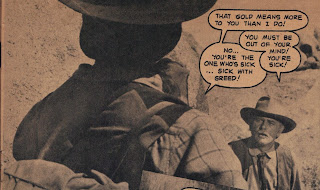 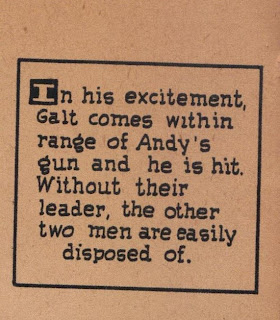 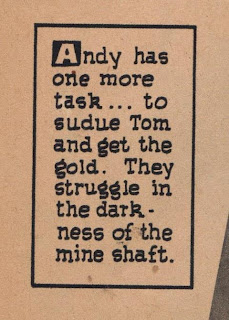 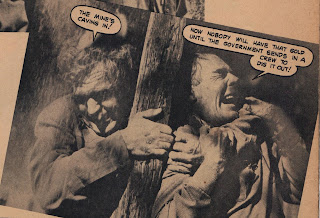 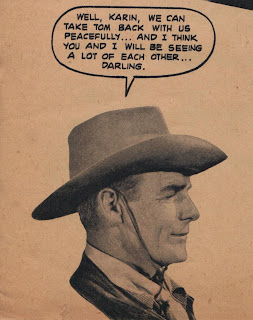 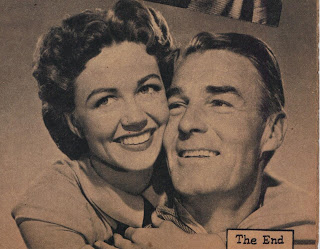 I'm posting this Round-up two days early, on Friday instead of Sunday, to give Rounders a chance to read my HELL ON WHEELS review before it airs on Saturday night -- don't miss it!

Okay, this one is early, so I'll apologize in advance that next week's Round-up will probably be a day or two late.  Have a great week -- and let me know what you think of the HELL ON WHEELS season opener!