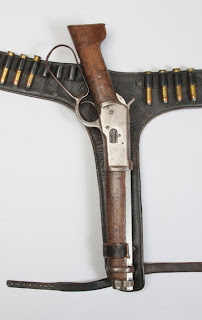 
Just in time for the National Day of the Cowboy celebration last weekend, the Autry opened their new Gamble Firearms Gallery with the exhibition, Western Frontiers: Stories of Fact and Fiction in the downstairs space that had until recently held their Gunfight at the O.K. Corral diorama.  A perfect complement to the nearby Greg Martin Colt Gallery, the new display likewise examines the role of the firearm in both the real and fictional West, but features pieces from Winchester, Remington, Smith & Wesson among others, as well as Colt.


Some of the weapons are of interest because of the sheer artistry in their design and execution; some intrigue because we know whose hand held them.  Most are of interest for both reasons.  For example, there are three beautiful pistols which belonged to Annie Oakley, each covered in gold, with pearl grips.  (A quick stroll to the Colt Gallery will reveal the sidearm of her television portrayer, Gail Davis.)

Winchester 'One of One Thousand' Model Rifle,
engraved by John Ulrich, 1879 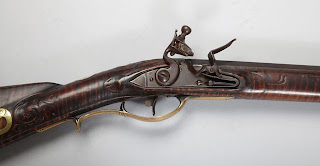 I asked curator Jeffrey Richardson about the collection, and about his personal favorites.  “The exhibition combines highlights from the Autry's permanent collection along with firearms recently donated to the museum by George Gamble, who amassed one of the finest private collections in the country. A variety of artifacts are on display, and all of the firearms are historically significant and of the highest quality. Besides the Winchester ‘One of One Thousand’ Model 1873 Rifle, two other notable examples are the Kentucky Rifle manufactured by Nicholas Beyer circa 1807 and a Colt Third Model Dragoon with an exceptionally rare mirrored top presented by Samuel Colt to E.K. Root, his company's superintendent, in 1857.” 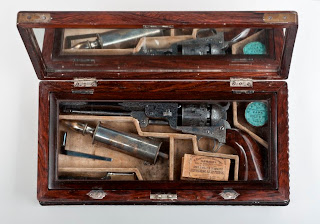 
Also on display are guns from President Theodore Roosevelt’s cowboy days, and Civil War Gen. George Meade’s Remington revolver.  And for fans of Steve McQueen and WANTED: DEAD OR ALIVE, they have not only his saw-off rifle known as the ‘Mare’s leg,’ but the toy version for pint-sized bounty hunters.   This is the 25th anniversary of the Autry, and even if it’s just been a few months since you were last here, there are plenty of new things to see.  Jews in the Los Angeles Mosaic opened in May, and will run through January 5th.   Art of the West features old and new visions of the west, and there have been additions and changes to the permanent galleries that focus on the West of films and other media (and frankly, a bit more compression than I would choose).


On Saturday, August 10th, at 1:30 pm, as part of the Autry’s monthly What is a Western? series, the Australian-set QUIGLEY DOWN UNDER (1990) will be screened.  This excellent western stars Tom Selleck, Alan Rickman and the luminous Laura San Giacomo, and is directed by Simon Wincer (LONESOME DOVE).  Curator Jeffrey Richardson will introduce.


At noon on Saturday, August 24th, the Autry will present their monthly double-feature of Gene Autry movies.  This time it’s UNDER FIESTA STARS (1941) and GOLDTOWN GHOST RIDERS (1953).  You can learn about everything that’s happening at The Autry HERE. 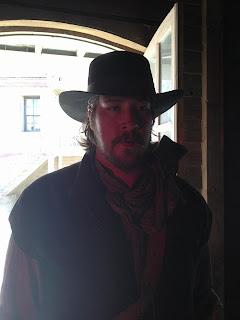 Exec Producer Danny Garcia tells me that SIX BULLETS wrapped on Wednesday, the last day of July.  “(Directors) Tanner (Beard) and Russell (Cummings) will now take care of editing, adr (dubbing), and colouring while I collect music from different sources.”  Among the eclectic mix of music artists are Tymon Dogg, formerly of The Clash , who does a cameo in the film;  Alabama 3, the British band who gained world-wide acclaim with their theme for THE SOPRANOS;  spaghetti-stylist composer Chris Casey; Lexie Beard, who scored Tanner’s HELL’S GATE; and Aaron Stielstra, who both starred in and scored THE SCARLET WORM, and stars in SIX BULLETS as well.


“And we're looking at getting some old Spaghetti Western tunes as well, to make the soundtrack complete,”  Danny added.  “We should have a trailer by October and the film should be ready by the end of the year; that's the plan.”  If you didn’t read about this film in last week’s Round-up, the link is HERE.


Michael Ansara, the Syria-born actor who played iconic roles on STAR TREK and in Westerns, died on Wednesday, July 31st, at the age of 91.  Suave, debonair and handsome, he was adept at both comedy and drama, playing villains and heroes, and in recent years had voiced ‘Mr. Freeze’ in various BATMAN shows.  He appeared in most of the western series, but to those of us growing up in the ‘50s and ‘60s he will always be the Apache Chief Cochise opposite John Lupton in the series BROKEN ARROW.  In his second series, LAW OF THE PLAINSMAN, he again played an Apache.


On Saturday, when I posted news of Ansara’s death, along with a link to a tribute video by his close friend, writer Michael Druxman, I was pleased that it was quickly shared forty-seven times.  I was even happier to see that many who shared were American Indian/Native American organizations and individuals.  Indian portrayals by non-Indians are often resented, but Michael Ansara’s portrayals never brought anything but honor to the characters he portrayed.   Below is a brief clip from BROKEN ARROW.

That's all for now.  Next week's Round-up will be a day or two early, to feature my review of the HELL ON WHEELS two-hour opener, which airs on Saturday, August 10th!