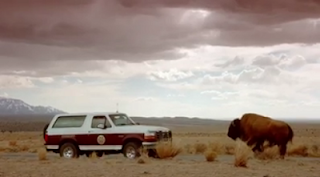 Season two of ‘LONGMIRE’, A&E’s present-day Western lawman series based on the Craig Johnson novels, returns on Memorial Day with a terrific season opener.  I just saw the rough-cut last night, and high as the standards of this series have always been, Unquiet Mind is one of their very finest, and one of their most ‘western’, episodes.


It’s the start of winter as a group of hard-core felons from various jurisdictions are being transferred to a maximum security facility.  When the transfer is fatally botched at the start of a blizzard, Longmire (Robert Taylor) must track them on foot, his personal quarry being a serial killer of Indians, who had just been in his custody.  It is very GUNSMOKE in all the best possible ways – and of course Marshall Dillon didn’t have to worry that meanwhile back at Dodge, Newly was trying to take his job, and sleeping with his daughter besides!


The solid ensemble cast is back, featuring Lou Diamond Phillips as Longmire confidante and saloon-owner Henry Standing Bear (Miss Kitty and Sam combined, minus the romance), Katee Sackhoff in the ‘Chester’ role of Deputy Vic Moretti, Bailey Chase as Branch ‘Newly’ Connally, and Adam Bartley as The Ferg, a heftier ‘Festus.’ 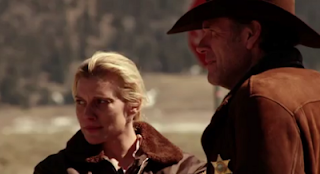 LONGMIRE is set on the edge of ‘The Res,’ and the series treats the varied and distinct lifestyles of American Indians with an interest and knowledge that is unique on television.  Previous episodes have looked at tribal disenrollment and jurisdictional issues – often with Zahn McLarnon as hostile Indian Police Officer Mathias.  In this particular episode and many others, mystical and religious elements are brought in, handled with a style and grace that make them compelling, which in less-skilled hands would come off as sappy. 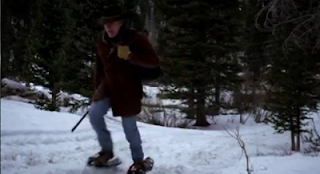 There were a couple of story-beats that were a little unclear in what I saw last night, but that was a rough cut; I’m sure they’ll be ironed out before Memorial Day.  If you’ve been unaware of LONGMIRE, or simply missed an episode or two, you have a chance to catch up on Saturday, May 25th, when A&E will run the entire ten-episode season one to prep you for the season two premiere.  Don’t miss it! 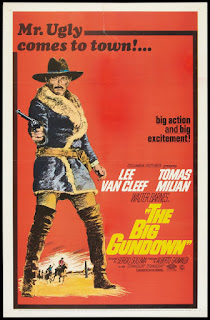 Yesterday, fellow Western writer C. Courtney Joyner and I spent the morning doing audio commentary for THE BIG GUNDOWN (1966).  This excellent and often overlooked Spaghetti Western, directed by Sergio Sollima and co-written by Sollima and Sergio Donati, and starring Lee Van Cleef and Tomas Milian, is being issued by GRINDHOUSE RELEASING in an extended English-language version, including three major sequences that were never theatrically shown in the U.S.

Lee on the hunt for Tomas


Spaghetti Westerns tended to run long by American standards, usually around two hours, and would be shown in Europe with an intermission.  American distributors routinely ‘cut to the chase,’ often removing important character and plot scenes if they slowed up the action; they wanted them short enough to play in double features.


The Academy Award-winning editor (for HURT LOCKER) Bob Murawski, President of GRINDHOUSE, explained to me that some parts of the film were dubbed into English but cut out of the theatrical release.  They were kept aside for when the film would be released to television, and further cuts would be required because of the violence; then these sequences would be put back, to pad out the running time.  Now, for the first time in the U.S., those scenes -- two in a monastery, and one with Milian and his wife – will be seen.  Also included in the release is the complete Italian-language version of GUNDOWN, including even more scenes that have never been dubbed into English. 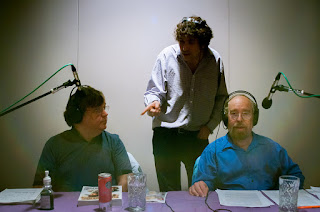 GUNDOWN was an extremely important film in Lee Van Cleef’s career.  A busy character actor in American film and TV for many years, work was petering out in the mid 1960s – he’d just played a supporting role in an episode of MY MOTHER THE CAR!  Van Cleef recalled that he was 24 hours from having his phone disconnected for non-payment when the phone rang, and it was Sergio Leone, asking him to do FOR A FEW DOLLARS MORE.  He went to Europe, made the film, and became an international star overnight.  His very next film was THE BIG GUNDOWN.  Interestingly, his costar, Tomas Milian, was in a very similar situation.  A Havana-born, New York-raised, Actor’s Studio-trained actor, he’d had parts in THE AGONY AND THE ECSTASY and BOCCACIO ’70, but he hadn’t made an impression.  He was planning to give up acting when Sergio Sollima offered him THE BIG GUNDOWN, which made him a star.  Incidentally, although Lee Van Cleef died in 1989, Tomas Milian is still alive and well, and  will soon be seen playing John Leguazamo’s grandpa in FUGLY!

Tomas has a laugh at Lee's expense


The Sergio Leone/Clint Eastwood westerns were a huge success in most of the world for several years before they came to the United States, and although BIG GUNDOWN was made before THE GOOD, THE BAD AND THE UGLY, it was released after, in the U.S.  The Columbia Pictures slogan for BIG GUNDOWN,‘Mr. Ugly Comes To Town!’ often triggers derisive comments from GBU fans because Eli Wallach’s character was ‘The Ugly,’ and Lee Van Cleef’s was ‘The Bad.’  (For any novices, Clint Eastwood was ‘The Good.’)  And while it’s true that some of the American publicity for GBU mixed up the names, I always figured Columbia called Van Cleef ‘Mr. Ugly’ in the poster because it brought up the association with the previous hit, and sounded cool in a way that ‘Mr. Bad’ would definitely not.  I’ll have more about THE BIG GUNDOWN when it gets nearer to release. 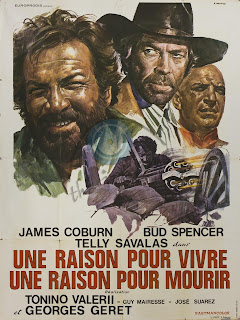 I received a lot nice comments after last week’s interview with screenwriter Ernesto Gastaldi.  But as Tom Betts, who writes the excellent site Westerns... All'Italiana! reminded me, I should also have asked about MASSACRE AT FT. HOLMAN, starring James Coburn, Telly Savalas and Bud Spencer.  I’d been regretting not inquiring more about Terence Hill, so I decided to run both questions by Mr. Gastaldi: 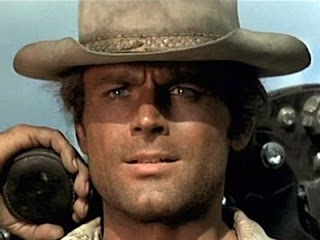 “Terence Hill ( Mario Girotti) was great in Trinità and in MY NAME IS NOBODY. I told him to try to become our Cary Grant, acting in comedies. He answered me he hasn't this kind of talent. He was right.” 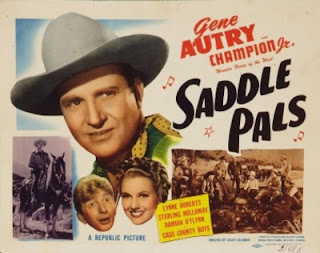 Every 4th Saturday of the month the Autry presents a double-bill of Gene’s movies at noon.  This time it’s two Republics, pre-war SIERRA SUE (1941), and post-war SADDLE PALS (1947).  SUE features Champion, Smiley Burnette, Fay McKenzie, and westerners like Kermit Maynard, Rex Lease and Eddie Dean.  SADDLE PALS is on the wacky side, with eccentric millionaire Sterling Holloway swapping identities with Gene.  It’s directed by the very talented Lesley Selander, and edited by Harry Keller.  (Now I will digress.)  Keller quickly became a director at Republic, later moved to Universal, where he directed several memorable western films, including two with Audie Murphy.  He directed THE LORETTA YOUNG SHOW and several TEXAS JOHN SLAUGHTER episodes for Walt Disney.  He produced the wonderful noir MIRAGE, starring Gregory Peck.   He retired for a while, then went back to work as an editor when Sidney Poitier asked him to.  I had the pleasure of being his assistant editor on test scenes for THE CHALLENGE, a film written and directed by Pulitzer Prize winning playwright (for THE SUBJECT WAS ROSES), Frank D. Gilroy.  Sadly the film, which starred David Keith and Dee Wallace Stone, never got beyond the test-scene stage.


A new Revolutionary War era four-hour miniseries will premiere on INSP on Memorial Day.  Check out the preview below. 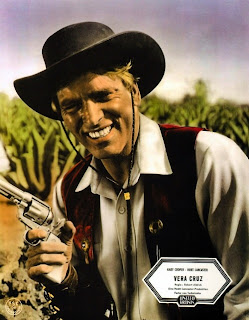 This three month-long retrospective at UCLA’s Billy Wilder Theatre, under the auspices of their archive and the Hugh M. Hefner American Film Program, began in April and will continue through June, and includes some of his finest westerns. On Friday, June 7th, see GUNFIGHT AT THE O.K. CORRAL (1957) and I WALK ALONE (1948); on Saturday June 15thit’s THE SCALPHUNTERS (1968) and CASTLE KEEP (1969); on Sunday June 23rdit’s ULZANNA’S RAID (1972); on Friday June 28th it’s CATTLE ANNIE AND LITTLE BRITCHES (1981). To see the complete schedule, go HERE .

BURT LANCASTER CELEBRATION AT LINCOLN CENTER!
Just heard from Pittsburgh-based film editor Tom Dubensky (NIGHT OF THE LIVING DEAD 1990), that New York’s Film Society of Lincoln Center is also marking Burt’s century with screenings, several of them westerns, some this week!  Missed APACHE today, but on Tuesday it’s VERA CRUZ at 1pm, THE LEOPARD at 3pm (not a western, but Terence Hill is in it), and THE SWIMMER at 9pm.  On Wednesday it’s ULZANA’S RAID at 2pm, CRISS-CROSS at 4:15pm and THE KILLERS at 9pm.  Thursday it’s TWILIGHT’S LAST GLEAMING at 1:15pm, THE SWIMMER at 4:15pm, ELMER GANTRY at 6:15pm and ATLANTIC CITY (I love this movie) at 9pm.  Learn more here: http://www.filmlinc.com/press/entry/fslc-celebrates-burt-lancasters-100th-birthday-with-a-7-day-salute


I know, once again I don’t have the rest of my coverage of the TCM Classic Film Festival.  The opportunity to do the commentary on BIG GUNDOWN came up very suddenly, so other things had to be pushed back.  I’ll try hard for next week!


In the meantime, have a great week, and don’t forget to check out LONGMIRE and COURAGE, NEW HAMPSHIRE on Memorial Day!