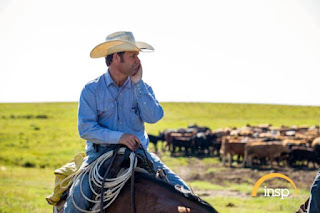 If you’re on the West Coast, Booger and Cody and Bubba and their brides and kids will be back for season four of THE COWBOY WAY today at 5 pm. If you’re on the East Coast it’ll be 8 pm.  It airs again on Thursday night -- check your local listings for times.  Just a couple of days ago I had the chance to talk to Booger Brown about the show, the network, his partners and family, and what’s in store for fans.

For those of you who haven’t watched the show, Booger, Cody and Bubba are partners in the Faith Cattle Company. They’ve been friends and co-workers for many years. Cody Harris is married to Misty, and they have a son, Carter. Bubba Thompson is married to Kaley, and they have a daughter, Andie. Booger married Jaclyn, a widowed pharmacist, with a young son, Matthew, in season two. Booger began by talking about the article I wrote about the show for True West Magazine.  If you haven’t read the piece, you can CLICKHERE.

Henry Parke:   Booger! How are you doing, sir?

Booger Brown: Now I'm doing good. How are you?  I just looked at that magazine just this morning, man. You did a heck of a job. Everybody was real excited, and our photographer, he was pretty excited that he got his pictures in a magazine.

Henry Parke:   Well that's great. It was such fun to meet all of you and it's great to talk to you again. I can't believe when we met you had just wrapped up season three and now you've got another season ready to go. It seems so quick.

Henry Parke:   My wife is a huge fan of the show and she made me promise that I'd tell you that she loved your wedding. Jaclyn looked gorgeous. My wife especially loved your having the pillow made out of your granddad’s shirt there.

Henry Parke:   How are you enjoying being a daddy to Matthew? 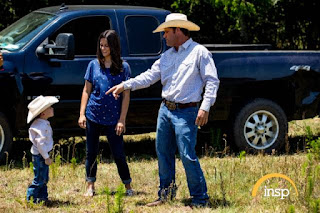 Booger Brown:  Oh man, it's great. There ain't no if, ands or buts about it. I couldn't draw a picture or couldn't write down a kid who would be any more perfect fit in my life then my little old son Matthew. I mean, he is it. When I first met Jaclyn, Matthew loved cars. His daddy passed away when he was 13 months old, and he sold cars.  And Matthew, he's turned on this cowboy thing, and especially when I'm keeping him, he comes home and he puts on his cowboy shirts and cowboy hat and cowboy boots and cowboy buckle belt -- he calls it not belt buckle but his buckle belt. And he wants to ride his pony and he goes with me. You can't ask for more.

One evening about a week ago, I was real tired, and  he said, “Dad, I want to ride my pony. Will you catch Trigger so I can ride him?” And I was thinking, I waited my whole life for a little old kid to ask me that, to want to go do what I do. And you can't turn it down. So I called his horse and kind of caught my second wind. And I thought, you know, I need to pen them heifers, bring 'em in. I went and caught my horse and I was leading Matthew everywhere I went, and he followed me while we penned the heifers; he likes being big boy and he likes being a country boy. At that point he said, “Dad, can I take my shirt off?”  And I said, “You bet you can: take it off!” He throws his shirt off and he thinks that's cool, you know. And his boots, he's got slip- on boots and they're a little big for him, and they slide off his feet while he's riding the horse. I had to fix them a time or two, and I was trying to pen them cattle. And he said, “My boots! My boots!” I said, “Give 'em here.” And I threw them over by a tree. We went out of the house this morning and he couldn't find his boots, and Jaclyn said, "I don't know where they're at." And I thought about it, and they're still there in the pasture by that tree! (laughs)

Henry Parke:   I have to tell you I just got to see the first episode of season four, where you get Matthew his own horse and it's just the dream of my childhood.

Booger Brown: Did you see him when he took his hat off? He got his horse, and he's trotting around the yard. He takes his hat off and holds it up in the air. Like 'Howdy y'all!'

Henry Parke:   A lot of season 3 was about you and your partners getting into the restaurant business. Were you disappointed that it didn’t work out?

Booger Brown: No, I wasn’t. It was something we thought we could go and do, it’d be profitable for us guys. And we got us a belly full of it, and we decided we were already married, and we was in the cattle business. We didn't need to be in two things. Couldn't be married to anything else, you know? 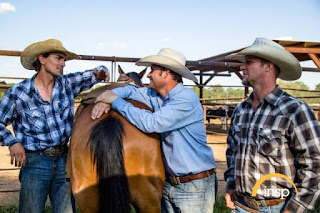 The trio plus one: Cody, unidentified,
Booger and Bubbah

Henry Parke:   Have you spent all of your life in Alabama?

Booger Brown: No, I actually grew up in South Florida. We had ranched in South Florida and  my family had a lot of historythere ; you should check it out sometime. William Brown come over from England when they were laying the transatlantic cable. He hid out in Cuba and then got a ride on over here to America.  He become an Indian Agent, and he started the Brown’s Boat Landing where the Seminole Big Cypress Reservation is now. There’s a video on Youtube called MYSTERY OF WILLIAM H. BROWN AND BROWN’S TRADING POST. I honestly haven't watched the whole Youtube video because it starts showing my granddaddy talking and I know I can't really handle seeing him, you know, but it's good stuff. The day they buried him, when they got done with a funeral, the Indians came and treated him just like he was an Indian and held an Indian ceremony at his grave. That's pretty cool, you know.

I was in my teens when we came to Alabama and bought a piece of property. (In Florida) it just got tough with the environmentalists and we realized if we were ever going to actually own anything ourselves, we had to get out of there.

My Dad is still a rancher here today. My mom and dad have been together for 35 years. Got married young and my Dad tells a story of when him and my mom got together. There was lots of wild cattle, and they had 'em a jeep, and a tranquilizer gun, and they would go around and tranquilize wild cattle in this old jeep, and had me in a car seat riding that old jeep at two years old. They would go around and tranquilize them, then come back with a trailer and load them up, and that's why they made extra money.

Henry Parke:   Without giving too much away, what can viewers look forward to in season four of THE COWBOY WAY?

Booger Brown:  We kind of expand, you know? We sign on with another business partner and we grow.  I mean, it just gets better. And I'm hopeful there'll be more action in there. I know they filmed a lot of action and it just depends on what makes the cut and what everybody wants to see on TV. And INSP is so supportive of us. They are so wanting to see the real cowboy side of things, and they treat us like real people. It's really good to work for somebody like INSP and know you're appreciated for what you do and what you stand for. They shoot us straight and we shoot them straight as well.

Henry Parke: And how are you doing personally?

Booger Brown: I've sold more cattle and traded more cattle this year than I have in the past. The economy is looking good and things are looking up for us. It's just a good feeling, and going back to the show, it seems like we're having such a positive influence on so many people.

Henry Parke:   Any other future plans, outside of the series, that we should know about?

Booger Brown:  Me and Jaclyn's really eager to find us a piece of property if we don't get my granddaddy's property back. And who knows, in the future might have a child. We're really ready to grow with what we got going on, expand our business in trading cattle and raising cattle.

AND THAT'S A WRAP!